“Stand Back and Stand By:” The Proud Boys Node of the January 6 Attack 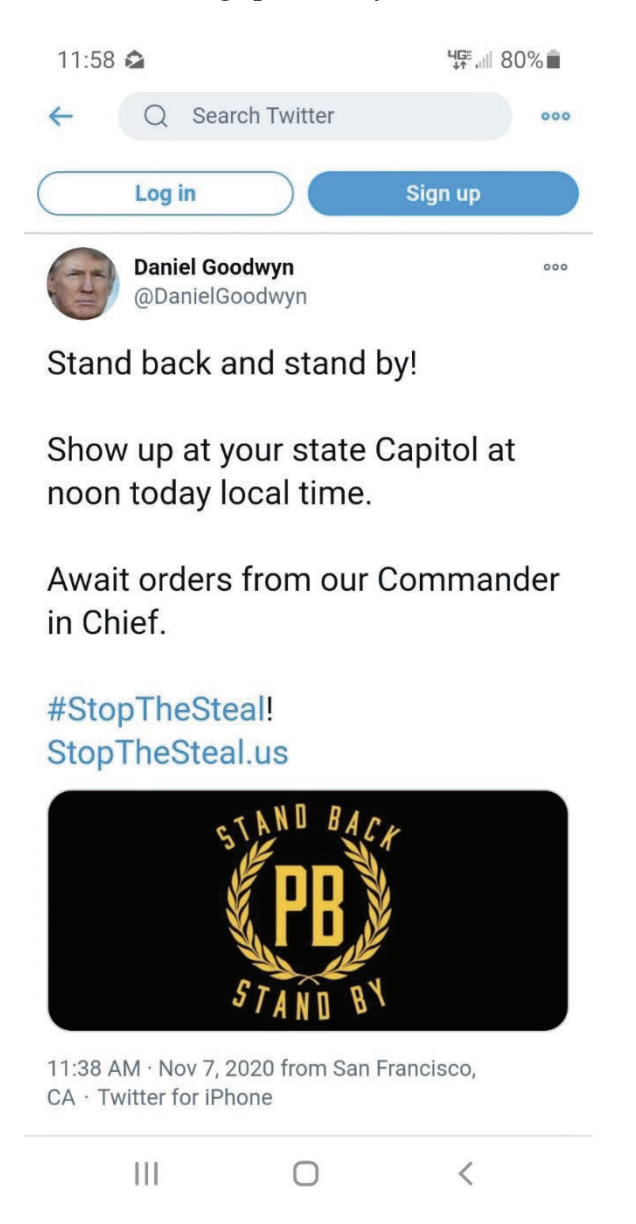 As I and others have reported, a node of three people with ties to the Oath Keepers is, thus far, the first sign of a larger conspiracy charge in the government’s investigation of the January 6 insurrection.

It’s clear the government believes they can get there with the Proud Boys, either in conjunction with or parallel to the Oath Keepers. But they’re not there yet.

I want to lay out what they’ve shown about the Proud Boys operations thus far.

In addition to Enrique Tarrio (who was arrested before the riot for vandalizing a black church in December), the government has identified six people as Proud Boy adherents in affidavits (plus Robert Gieswein, who coordinated with them):

While some of these — notably, Bryan Bentancur, who lied to his parole officer about handing out bibles to excuse a trip to DC that day — were caught incidentally, it’s clear that Biggs and Pezzola were priorities, the former for his leadership role in the group and the latter for his appearance in videos breaking in a window with a police shield.

Between these affidavits, the government has provided evidence that the Proud Boys plan their operations in advance, with this quote from a Joe Biggs interview.

In the case of the January 6 insurrection, that pre-planning involved creating a false flag to blame Antifa. The government showed this in a Tarrio message posted in December.

For example, on December 29, 2020, Tarrio posted a message on the social media site Parler1 about the demonstration planned for January 6, 2021. Among other things, Tarrio announced that the Proud Boys would “turn out in record numbers on Jan 6th but this time with a twist… We will not be wearing our traditional Black and Yellow. We will be incognito and we will be spread across downtown DC in smaller teams. And who knows….we might dress in all BLACK for the occasion.” I believe the statement about dressing in “all BLACK” is a reference to dressing like the group known as “Antifa,” who the Proud Boys have identified as an enemy of their movement and are often depicted in the media wearing all black to demonstrations.

And the government showed agreement between Tarrio and Biggs with this similar message from Biggs.

On or around the same day, BIGGS posted a similar message to his followers on Parler in which he stated, among other things, “we will not be attending DC in colors. We will be blending in as one of you. You won’t see us. You’ll even think we are you . . .We are going to smell like you, move like you, and look like you. The only thing we’ll do that’s us is think like us! Jan 6th is gonna be epic.” I understand that BIGGS was directing these statements at “Antifa.”

Daniel Goldwyn, texting that day, addressed the claim of a false flag on texts. 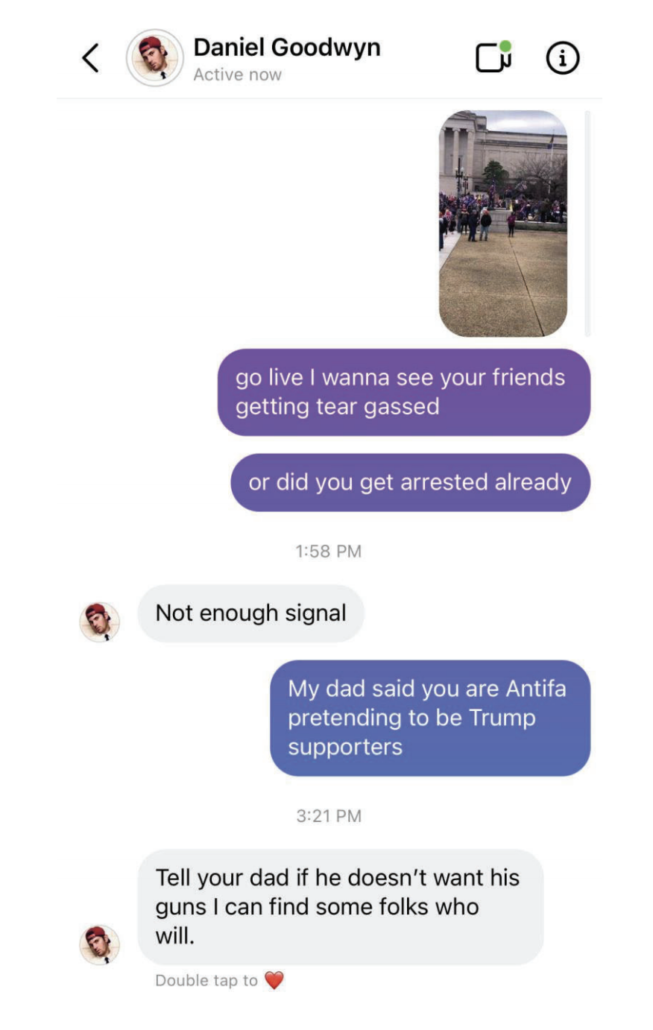 The government provided evidence that members of the Proud Boys had followed the false flag plan, with pictures of the men marching through DC “incognito” before the insurrection.

On January 6, 2021, an individual that I have identified as BIGGS and a group of people that hold themselves out as Proud Boys were depicted on the east side of the U.S. Capitol. Consistent with the directive issued by organizers of the Proud Boys, including Tarrio and BIGGS, none of the men pictured are wearing Proud Boys colors of black and yellow, but are instead dressed “incognito.” Indeed, BIGGS, wearing glasses and a dark knit hat, is dressed in a blue and grey plaid shirt.

In Biggs’ affidavit (the most recent of the six), the government also provided evidence of communications between members during the attack.

Your affiant has reviewed additional footage from the events inside the U.S. Capitol. In one image, shown below, Pezzola appears to have what I believe to be an earpiece or communication device in his right ear. In my experience, such a device could be used to receive communications from others in real time. Your affiant also notes that multiple individuals were photographed or depicted on videos with earpieces, including other individuals believed to be associated with the Proud Boys. For instance, in the picture of the Proud Boys referenced above in Paragraph 13, an individual believed to be part of the group is pictured wearing a similar earpiece.

Your affiant has also identified certain Proud Boys at the U.S. Capitol on January 6, 2021, who appear to have walkie-talkie style communication devices. For instance, in the picture of the Proud Boys referenced above in Paragraph 13, both BIGGS and the individual next to him have such devices on their chests.

Gabriel Garcia is described as captain by another of the men (though it’s unclear whether thank rank was replicated in the group).

Additionally, on January 8, 2021, the FBI received information from the public regarding a separate subject (“S-1”). S-1 uploaded to Facebook pictures of himself inside of the Capitol building on January 6, 2021. As FBI Agents reviewed the evidence related to that report, they discovered that S-1 posted a status on Facebook tagging GARCIA and calling him “El Capitan.” The caption reads, “El Capitan doing his duty. Gabriel Garcia.” Systems checks reveal that GARCIA is a former captain in the United States Army. GARCIA also uses the handle “Captain” as his display name on the social media platform Telegram

Affidavits provide two different descriptions of Pezzola being among the first to break into the Capitol.

One such video depicts an individual, now identified as Proud Boys member Dominic Pezzola, breaking the window of the U.S. Capitol Building with a clear plastic shield at approximately 2:13 p.m.3 Shortly after the glass in the window is broken, an unidentified individual can be heard yelling words to the effect of, “Go, Go, Go!” Several individuals enter the building through the broken window, including Pezzola. A nearby door was opened and a crowd of people began to enter the U.S. Capitol.

This one comes from the Pezzola affidavit.

On January 8, 2021, FBI received a lead depicting publicly available photographs and videos of an unknown individual breaking the window of the U.S. Capitol Building, which is located in Washington, D.C., with a clear plastic shield, and then entering the Capitol building. According to time and date stamps, this occurred on January 6, 2021, at approximately 2:39 p.m.. Below are screen shots from one such video. In the video, soon after the glass in the window is broken, an unidentified individual can be heard yelling words to the effect of, “Go, Go, Go!” The individual with the shield is depicted in the video as entering the Capitol building, while still holding the shield. The screen shot on the left shows the individual breaking the window, and the screen shot on the right, which is taken seconds after the other screenshot, shows his face.

The government has provided some (albeit thus far, scant) evidence that one plan was to target members of Congress, which Garcia calling Pelosi out personally.

Approximately 35 seconds into the video, GARCIA says loudly, “Nancy come out and play.”

There is a witness (who may not be entirely reliable) describing the group to be armed.

W-1 stated that other members of the group talked about things they had done during the day, and they said that anyone they got their hands on they would have killed, including Nancy Pelosi. W-1 further stated that members of this group, which included “Spaz,” said that they would have killed [Vice President] Mike Pence if given the chance. According to W-1, the group said it would be returning on the “20th,” which your affiant takes to mean the Presidential Inauguration scheduled for January 20, 2021, and that they plan to kill every single “m-fer” they can.1 W-1 stated the men said they all had firearms or access to firearms.

In Biggs’ affidavit, the government describes Biggs disclaiming having any advance plan.

On or about January 18, 2021, BIGGS spoke with agents of the FBI after video emerged online of him inside the U.S. Capitol. BIGGS stated, in substance and in part, that he was present in Washington, D.C. for the demonstration on January 6, 2021. BIGGS admitted to entering the Capitol building on January 6, 2021, without forcing entry. BIGGS informed the interviewing agent that the doors of the Capitol were wide open when he made entry into the building. BIGGS denied having any knowledge of any pre-planning of storming the Capitol, and had no idea who planned it.

And in two cases, the government has provided evidence that the group was responding to Trump’s orders.

On November 16, 2020, OCHS made a post to the social media site Parler, in which he forwarded a Tweet by President Trump declaring, “I WON THE ELECTION!” and OCHS stated, “Show this tweet to leftists and say they won’t do shit when he just keeps being president. Don’t say it was stolen or rigged. Just say we’re doing it and they won’t fight back. They are getting scared, and they don’t function when they’re scared.

In Goodwyn’s case, the government shows him adopting Trump’s avatar on Twitter and repeating Trump’s own line from the debate, “Stand back and stand by.” 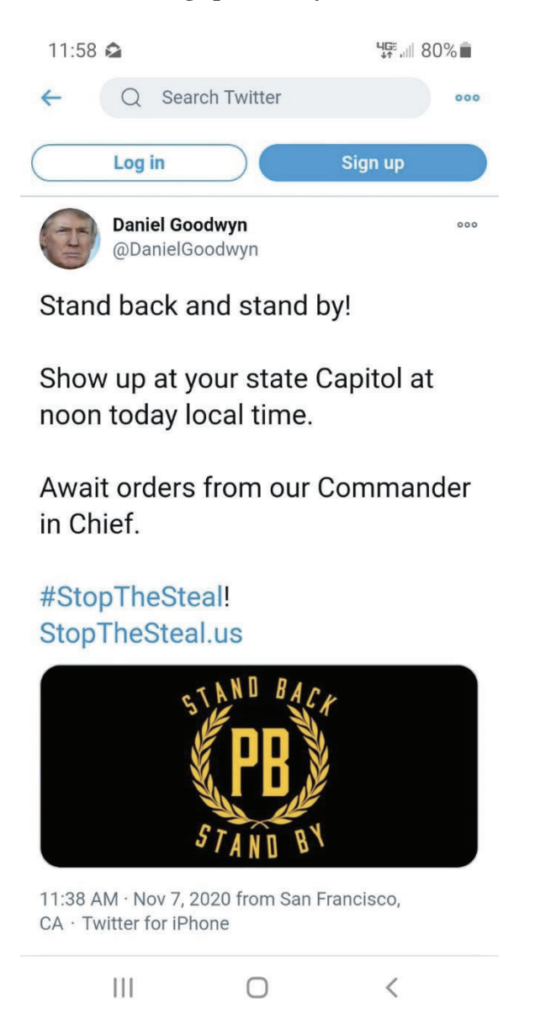 Again, this is just what’s public two weeks after the attack, and just those whom the government identified as members. There are others (notably John Sullivan, whose brother has not been arrested but who has ties to the group), who would be obvious candidates to flip to learn more about the group, and there are some tangential figures not included here.

This route is one of the most likely ones via which the government will tie the violence to those close to Trump trying to undermine the election and — with Trump’s “Stand back and stand by” comment — possibly even Trump.

Update: Corrected how Pezzola broke in.

Update: Tarrio was also offering to pay for lawyers for people.

Update, 1/26: I’ve added Robert Gieswein to this list, based on this WSJ video showing him involved throughout the day with the Proud Boys.

Update, 1/27: I’ve added Andrew Bennett, who was described as wearing a Proud Boy hat in his affidavit.

In November, Emmet Sullivan Suggested He Might Not Be Done with DOJ and Mike... Crowdsourced Timeline: Tick-Tock to Insurrection and Beyond [UPDATE-3]