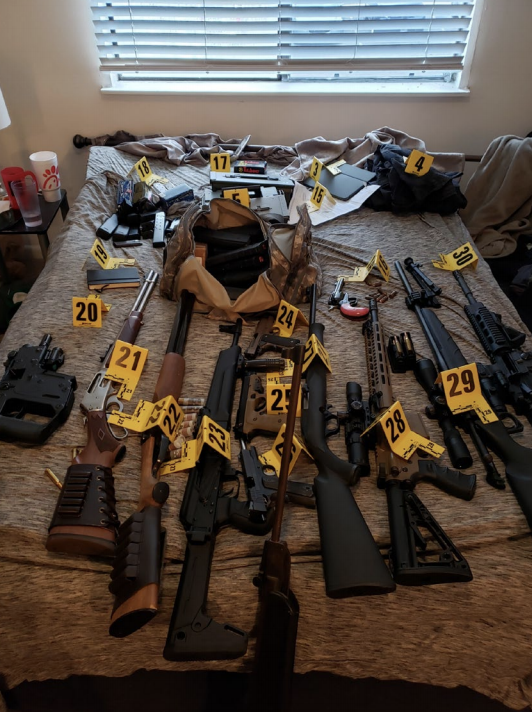 Yesterday, a magistrate judge in Nashville, Chip Frensley, gave Eric Munchel bail. He’s the guy who has become known as “Zip-Tie Guy” because of a picture of him taken in the Senate during the January 6 coup attempt, showing him dressed in tactical gear and holding zip ties.

The government will appeal the decision to DC Chief District Judge Judge Beryl Howell over the weekend, and thus far she has granted such requests from the government, so it’s certainly possible he will ultimately be held.

The bail hearing demonstrates one of the problems with the government’s investigation and prosecution going forward, one which demonstrates the necessity of prosecuting former President Donald Trump (see also this live tweet of the hearing and Politico’s account).

Munchel got charged, along with his mom, Lisa Marie Eisenhart, with the two trespassing charges used for most defendants, conspiracy among themselves, along with obstructing law enforcement during civil disorder.

The filing supporting detention described that Munchel must be found guilty of attempting to impede law enforcement during civil disorder.

To prove a violation of 18 U.S.C. § 231(a)(3), the government must show (1) that a civil disorder existed at the time of any alleged violation; (2) that such civil disorder was resulting in interference with a federally protected function; (3) that one or more law enforcement officers were lawfully engaged in the lawful performance of their official duties incident to and during the commission of such civil disorder; (4) that the defendant attempted to commit an act for the intended purpose of obstructing, impeding, or interfering, either by himself or with someone else, in a violent manner with such law enforcement officer or officers; and (5) that such attempt to act was done willfully and knowingly. United States v. Casper, 541 F.2d 1275, 1276 (8th Cir. 1976).

The evidence doesn’t show Munchel doing that — though shows his mom yelling at the cops. Indeed, the judge in the hearing described video showing him being deferential to cops inside the Capitol. The fact he grabbed the zip ties and said he wanted to seize the Senate gavel suggests he targeted Congress, not the cops.

What the evidence does show is Munchel is a gun nut who wanted to terrorize lawmakers. His mom spoke more explicitly of violent revolution.

“It was a kind of flexing of muscles,” said Munchel, who wore a bulletproof vest and complained that police confiscated his Taser during the riot. “The intentions of going in were not to fight the police. The point of getting inside the building is to show them that we can, and we will.”

Preparing for their 10-hour drive home, the 30-year-old clamoured for greater organisation in the next steps to fight against Biden’s America. He worried that many pro-Trump warriors were individualists and lamented that potential leaders in the Make America Great Again (Maga) movement faced difficulty in rallying troops due to banishment from mainstream social media sites. “Our biggest struggle is getting together, knowing where to go, what to do and who to go to,” said Munchel despondently.

His mother agreed: “The left has everything: the media, organisations, the government. We have to organise if we’re going to fight back and be heard.” Eisenhart, a nurse, added that a violent revolution has long been on the cards thanks to last year’s racial justice protests, anti-police riots and “unnecessary” coronavirus lockdowns.

“This country was founded on revolution. If they’re going to take every legitimate means from us, and we can’t even express ourselves on the internet, we won’t even be able to speak freely, what is America for?” said a teary-eyed Eisenhart, biting into a hotdog. “I’d rather die as a 57-year-old woman than live under oppression. I’d rather die and would rather fight.”

The most compelling piece of evidence that Munchel could have coordinated with a more organized plot involves an exchange he had with the Oath Keepers as he headed into the building.

As MUNCHEL and Eisenhart make their way to the Capitol, they encounter several members of the “Oathkeepers,” a militia group that is distrustful of government authority. One of the Oathkeepers says, “There’s 65 more of us coming.” MUNCHEL, when he recognizes them, says in affirmation, “Oathkeepers,” and bumps fists with one of the men.

But that does’t show pre-planning nor does it tie his possession of the zip ties to any plan the Oath Keepers had.

The government clearly either fears that Munchel will engage in violence or it wants to make sure it keeps its showy zip-tie guy on ice to include kidnapping among the parts of the plot they’ll eventually lay out. But the judge is right that, thus far, the government hasn’t shown evidence that he coordinated with anyone except his mom.

Silent in all this (because, unlike the other kitted-out guy in the Senate that day, Munchel was not shown to have told a reporter that he responded to the call of the then-President to come to DC to engage in that show of force) is the framework of Trump’s calls to overturn an election. The evidence even suggests that Eisenhart claims to have believed Trump’s Big Lie of a stolen election (and it may well be true that she does believe it). But that’s the single factor that makes Zip-Tie Guy’s actions, with his mom, dangerous. He wanted to scare lawmakers, and he wanted to do it in the context of a plea to illegally retain power. A plea from Donald Trump.

Until such time as prosecutors are ready to argue that this show of terrorism was intended to support false claims of election theft mobilized in an attempt to overthrow the Constitutional government of the United Staes, judges are going to find that guys like Munchel owned their arsenals legally and — while violating specific laws protecting the Capitol and the counting of the votes — do not pose a grave threat to our country.

I’m not saying I believe that. I’m not even sure Frensley does.

But absent closer ties to the Oath Keepers (who did clearly pre-plan), the thing that makes the raid on the Capitol especially dangerous, the thing that makes Munchel’s grab for the gavel and the zip-ties criminal, is Trump’s illegal plan. And so, until prosecutors start naming Trump as a co-conspirator, start naming the Big Lie of a stolen election as the motivating cause of the violence, guys like Munchel are going to continue to get bail.

Update: Mirriam Seddiq did a video talking about how conspiracy works in US law, as applied to Trump’s incitement of an insurrection that lays out how this should be presented to judges.

Update: Over the weekend, Beryl Howell granted the government’s emergency motion for detention. The motion included an additional allegation against Munchel, that he had assaulted Bloomberg journalist William Turton.

It also more aggressively described what Munchel had done as insurrection.

Finally, it is difficult to fathom a more serious danger to the community—to the District of Columbia, to the country, or to the fabric of American Democracy—than the one posed by armed insurrectionists, including the defendant, who joined in the occupation of the United States Capitol. Every person who was present without authority in the Capitol on January 6 contributed to the chaos of that day and the danger posed to law enforcement, the Vice President, Members of Congress, and the peaceful transfer of power. The defendant’s specific conduct aggravated the chaos and danger. It was designed to intimidate Members of Congress and instigate fear across the country. Make no mistake: the fear the defendant helped spread on January 6 persists—the imprint on this country’s history of a militia clad insurrectionist standing over an occupied Senate chamber is indelible. Only detention mitigates such grave danger.

It makes it clear Munchel may be facing additional charges.

The evidence amassed so far subjects the defendant to felonies beyond that with which he has been charged so far, including obstructing Congress, interstate travel in furtherance of rioting activity, sedition, and other offenses. These offenses carry substantial penalties, which incentivizes flight and evading law enforcement—a thought that the defendant already appears to have contemplated by virtue of avoiding his residence and workplace, terminating his Facebook account, and leaving his cell phone with an associate.