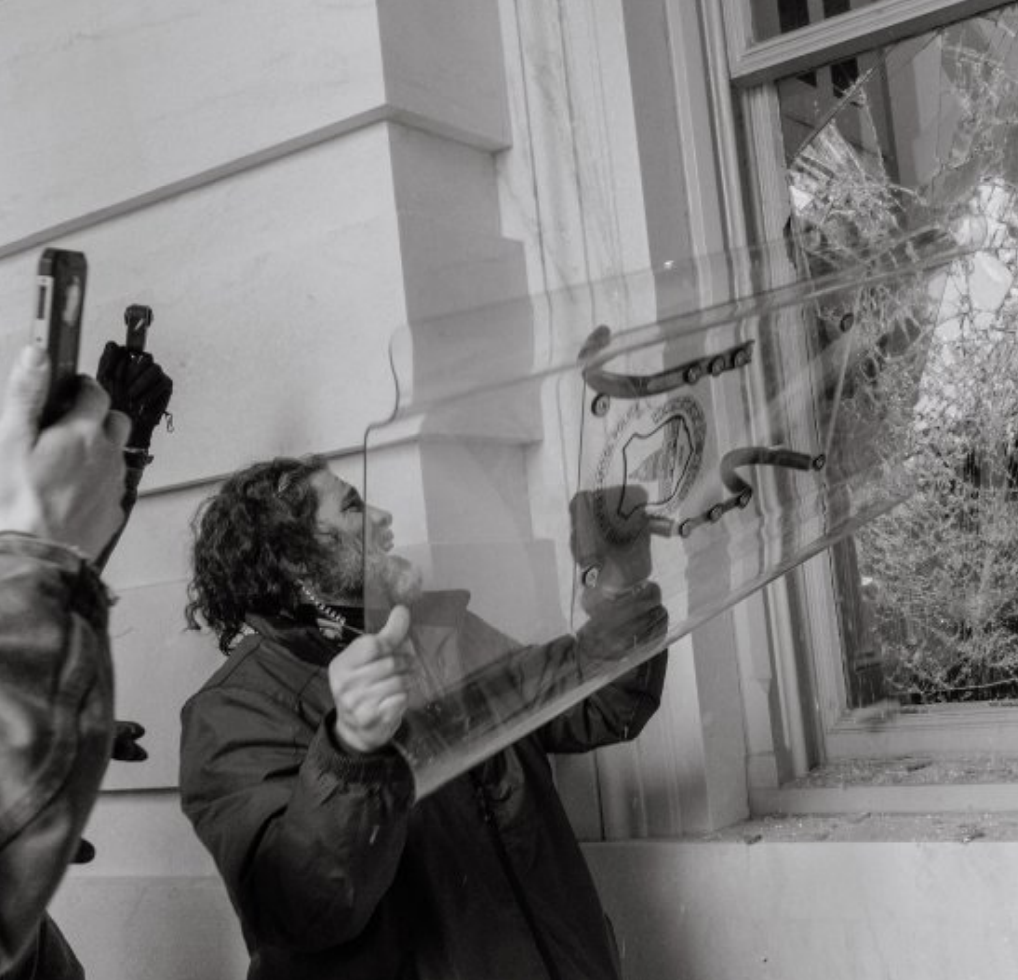 The government released its motion for detention for Dominic Pezzola, AKA “Spaz,” the Proud Boy who was among the first to break into the Capitol.

As a Marine with ties to the Proud Boys, it’s easy to see why the government thinks he’s dangerous.

To support their claim he is, though, the government made two arguments that probably aren’t the main reasons. First, they treat his use of a police shield to break open the door of the Capitol as a crime of violence.

Felony destruction of government property is a crime of violence. For purposes of the bail statute, as relevant to these offenses, a crime of violence is defined as “an offense that has an element of the use, attempted use, or threatened use of physical force against the person or property of another,” if that crime is punishable by ten years or more in prison. See 18 U.S.C. § 3142(f)(1)(A) & 16. Section 1361 of Title 18 of the U.S. Code meets those requirements. It is punishable by ten years if the property damage was greater than $1,000, and its elements include the use of physical force against the property of another.

More spectacularly, they point to the bomb-making materials they found at his home.

The FBI also executed a search warrant at the defendant’s residence at the time of his arrest. Agents recovered, from a room that appeared to be used exclusively by the defendant, a thumb drive that contained hundreds of .pdf files. While some of those files are related to seemingly innocuous topics, a significant number of those .pdfs provide detailed instructions for making homemade firearms, poisons, and/or explosives. A sample of titles includes, but is not limited to: (1) multiple serials of a series entitled “Advanced Improvised Explosives,” those serials including “Explosive Dusts” and “Incendiaries;” (2) “The Box Tube MAC-11,” with subtitle, “The Ultimate DIY Machine Pistol;” (3) “Ragnar’s Big Book of Homemade Weapons;” and (4) “The Advanced Anarchist’s Arsenal: Recipes for Improvised Incendiaries and Explosives.” All of the above examples contain detailed instructions for how to make the subject matter reflected in their titles, and they are but four of hundreds of similarly titled .pdf files on the recovered thumb drive.

But I’m more interested, as is my wont, in the ways that the government points to something more.

It does so, first of all, by hinting at additional charges to come — though lays out charges that are likely not the ones DOJ has in mind for Pezzola.

The defendant is currently charged by complaint with one crime of violence—breaking the window of the Capitol with the shield—and the evidence as laid out above would establish probable cause to believe that he committed another crime of violence a short time earlier, robbery of U.S. government property, in violation of 18 U.S.C. § 2112.

The evidence as laid out above would also establish that the defendant violated 18 U.S.C. § 2112, robbery of U.S. Government property, and § 111, assault on a federal officer, among other things. The government acknowledges that the defendant is not charged with these offenses at the time this memorandum is submitted.

More importantly, the government repeatedly talks about how he coordinated his actions.

It uses the language of conspiracy — persons known and unknown — to describe his actions leading the mob towards the Capitol.

At around 1:00 p.m. EST, on January 6, 2021, known and unknown individuals broke through the police lines, toppled the outside barricades protecting the U.S. Capitol, and pushed past U.S. Capitol Police (“USCP”) and supporting law enforcement officers there to protect the U.S. Capitol.

The motion describes how he walked up to the barriers with others, including this guy in a flag bandana. 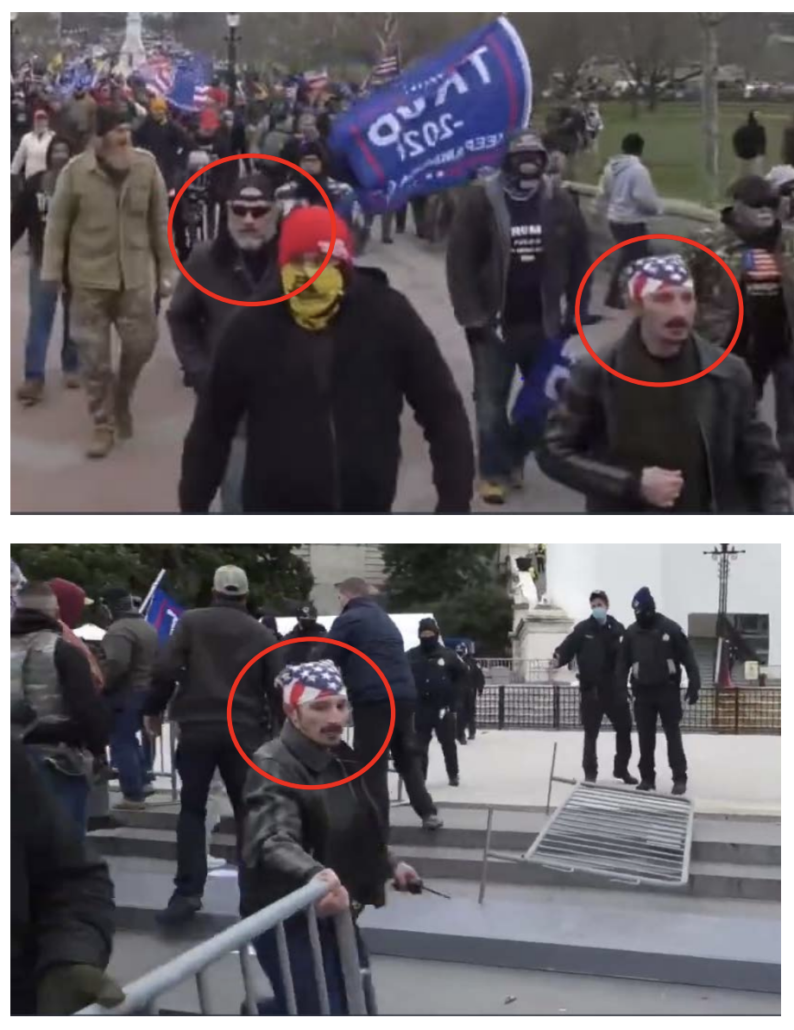 It shows how, at the moment he breaks in the window through which the Capitol was breached, he was wearing an earpiece.

The government describes how that first group of people immediately turned to “where they counting the votes?” (though were distracted from finding them by Officer Goodman).

Pezzola was part of a group that turned to the right and eventually confronted USCP Officer Eugene Goodman, demanding to know “where they meeting at, where they counting the votes?” It is unclear from the video which member of the mob shouted that question at Officer Goodman.

And the motion describes Pezzola talking about a “we” who had taken the Capitol.

“Victory smoke in the Capitol, boys. This is f***ing awesome. I knew we could take this motherf***er over [if we] just tried hard enough.”

While the motion lays out its argument for detention by emphasizing other things, the argument it is really making is that Pezzola, as a key member of the conspiracy (and as someone with the operational security to flee), he needs to be detained.

It’s not surprising that the government points to evidence of a conspiracy. After all, he’s associated with the Proud Boys, a key focus of their attention (and the motion cites a W-1 who is clearly privy to their plans).

It’s just telling how the government only hints at that argument while pointing to other things that make Spaz dangerous.

Update: DOJ announced the conspiracy indictment of Pazzola with William Pepe, the guy in the flag bandana pictured above.

The prosecution team includes the guy who prosecuted Maria Butina, Erik Kenerson, along with a CT prosecutor from NSD.

Update: Here’s the indictment itself. It is very narrowly drawn, describing the conspiracy to cover just their successful entry past the cops at the second barrier.

The object of the conspiracy was to obstruct, influence, impede, and interfere with law enforcement officers engaged in their official duties in protecting the U.S. Capitol and its grounds during the demonstrations planned for January 6, 2021.

I suspect DOJ did this, in part, to have a way to keep Pepe detained. He’s not even accused of entering the Capitol, nor is he charged with stealing anything or assaulting a copy. But by being charged in a conspiracy with Pazzola, he’s on the hook for Pazzola’s more obviously violent acts.