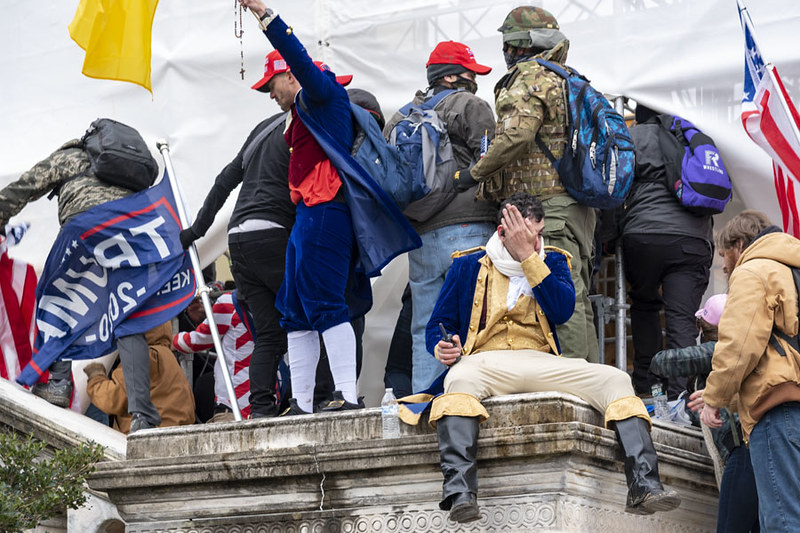 Responding to the calls for understanding coming from unctuous Republicans, I have once again made an effort to understand the freak show that is the Republican party of today. Tradition dictates a separation between the relatively normal politicians, people like Mitt Romney, Brad Raffesnperger, and Susan Collins, and the rabble we call the base of the party. This is an artificial distinction. The entire party fears and loves the base, or at least tolerates it, because the base is their sole hope for power.

There are two parts to the base: the action wing and the support wing.

The support wing is composed of two parts: Sympathizers, those who agree with the action wing but haven’t yet joined in because of age or fear of consequences; and Normies, who really can’t stand any of the rest but need their votes to gain power. Even the vulgar Trump thought his Capitol rioters were low class.

The action wing consists of three main groups, the QQQrazies, the Evangelical Militants, and the Armed Thugs. The QQQrazies are a crowd of gullible people sucked into a reality-denying mash-up of recycled blood libels created by an anonymous Q. [1] The principal lie is a fantasy lurking in the diseased parts of society and translated into less obvious anti-Semitism. The QQQrazies believe certain Democratic politicians and liberal elites drink the blood of children, or use them in some hideous satanic ritual, or keep them for sexual abuse, and that Trump is going to arrest them and either hang them in a public spectacle, or send tham to Guantanamo. Or maybe both. The idea that Trump would lift a finger for anyone besides himself is laughably stupid.

The Evangelical Militants are discussed in detail here. The Elmer Gantries from the religio/political segment of Evangelicals decided that The Almighty sent Trump to lead the way to the New Jerusalem. They authorized and directed their flocks to vote for a thrice-married, porn-star screwing, narcissistic reality TV performer, and then doubled down at every step of Trump’s increasingly obvious fascism. Then they authorized their flock to support his insurrection.

Most of these Evangelical Militants and QQQrazies are relatively harmless. They served as fodder in the Capitol Insurrection, and provided cover for the real dangers, the Armed Thugs. This group includes the Proud Boys, the 3 Percenters. the Oath Keepers, the Boogaloo Bois, and the wannabes like a the dolts on TheDonald.win, now Patriots.win. The Armed Thugs also include other militias like the people who attacked the Michigan legislature, and those who allegedly hatched plans to murder the Governor of Michigan. Trump worked to prevent law enforcement from keeping close watch on these people, insisting that right-wing terrorism was nothing compared to Antifa, whatever that is. It’s becoming clear that the Armed Thugs were the really dangerous people in the Capitol Insurrection.

The active wing of the Base is not interested in politics. They just want what they want. [2] They have no actual policy goals, and no reason to seek power, except to deny it to others.

So far, I’ve just described the Base. On its own, it’s a formless mob, capable of eruptions of violence and individual acts of terror but not an existential threat to democracy. Like any mob, it needs leadership before it becomes truly dangerous. So I turn to the organizational structure.

Trump is the Capo dei Capo, the undisputed and only leader. The mob is devoted to him, attentive to his every word, his every desire.

His Consigliere are Josh Hawley and Ted Cruz. They are both graduates of elite universities and law schools, and served in SCOTUS clerkships. Cruz earned his bona fides by kissing the ring after Trump insulted his father and his wife in ugly personal terms; he’s a weakling. Hawley never crossed Trump. He’s a self-motivated lickspittle. They create spurious arguments that serve as crutches for the weaker Republican Senators, who use them as a pretend justification for their own ring-kissing.

The muscle is provided by Lauren Boebert and Marjorie Taylor-Greene, who carry big guns and talk like gangsters about their rights and the magnificence of their Capo.

Matt Gaetz is Fredo. There are also many sub-Fredos. There’s Mo Brooks and Madison Cawthorn, who showed up at Trump’s incitement rally to scream at the mob to go forth and defend freedom against the grave danger posed by majority rule. There’s Rudy Giuliani, sweating in the role of the horse’s behind, the part with no head. There’s the Trump spawn, Don Jr and Eric, who hold coats and pretend to be real boys.

There it is folks, the Party of Lincoln has devolved into the Mob Party.
=====
[1] Apparently our vaunted spies can’t figure out who Q is.
[2] Astonishingly, 19 of the insurrectionists were elected officials according to the New York Times. Also, there were cops and military among the rioters.

Trump’s Impeachment Defense Is Silent about His Unconstitutional Demand... The Soft Bigotry of Expecting the Commander in Chief to Only Tweet