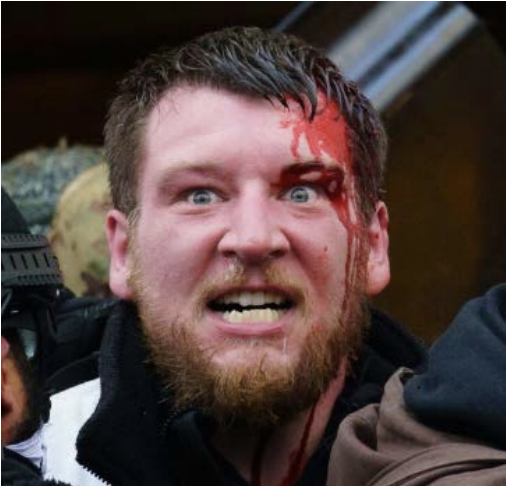 In this post, I noted that many of the people who engaged in the most violent action on January 6 were not known to be part of one of the organized militia groups, which seem instead to have set off and channeled the violence of others. I described how the only explanation that Emanuel Jackson gave for twice assaulting cops was that after attending Trump’s rally, he followed the crowds to the Capitol and beat up several cops, including with a baseball bat, in order to prevent the certification of the vote.

In updates, I noted how the son of the guy whose dad was pictured carried a Confederate flag through the Capitol punched out windows because, after attending the rally, he followed someone yelling directions in a bullhorn (which could be Alex Jones) and then followed the instructions of someone else to clean out the glass in a window. And a former Marine beat up several cops after he, “got caught up in the moment” after marching down from the Ellipse. 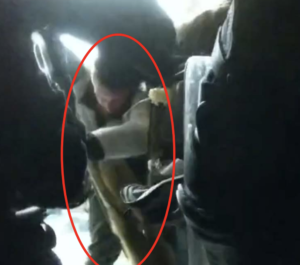 The charging documents from the recent arrest of Kyle Fitzsimons provides another example of someone who got inspired by Trump and went onto first grab and then charge the cops trying to protect the Capitol.

The affidavit quotes from a local article, in which he described being “asked” by President Trump to go give weak Republicans the kind of boldness they needed to take back the country.

“The speeches from the morning were overtly preaching the election was not over, there was a path to victory through decertification, there was a plan to delay the certification by the House and Senate and then state legislatures would convene and (certify) the right result.” FITZSIMONS stated that as the rally at the Ellipse ended, the crowd was asked by President Trump to walk to the Capitol to “give our Republicans, the weak ones … the kind of pride and boldness that they need to take back our country.”

After the rally he went and changed into his work clothes, a butcher’s uniform, then walked to the Capitol and fought the cops until he got hit in the head with a police baton.

Two witnesses who know him describe that before January 6, he was known for his right wing beliefs, his gun ownership, and his racism, but not for being a violent person.

Yet on January 6, after hearing Trump’s request to go to the Capitol and embolden other Republicans to steal an election, he did so, violently.

Here’s my running list of the people who, as of yesterday, had been charged with intimidating or assaulting police.

tweets from our circle
emptywheel@emptywheelRT @Popehat: It's all getting worse, it's going to keep getting worse, maybe a LOT worse, and it's going to be a long time before it gets b…24 minutes ago24 May 2022
bmaz@bmazWho? Source: Commanders spend $100M on Va. land espn.com/nfl/story/_/id…4 hours ago24 May 2022
bmaz@bmazRT @LemonSlayerUS: @MatorinLaw @bmaz @MrKovalenko @SecDef Better than getting this promotion.👇 pic.twitter.com/pVxEw8lnlg5 hours ago24 May 2022
Jim White@JimWhiteGNVRT @bettycrackerfl: I’d like a full accounting of how much FL taxpayers have paid to lawyers defending the shoddy work products signed by @…5 hours ago23 May 2022
Ed Walker 🍞🌹💉💉@MasaccioEWRT @RedEyedDespair: Damn that's crazy, why aren't you fighting for healthcare then twitter.com/TheDemocrats/s…9 hours ago23 May 2022
Ed Walker 🍞🌹💉💉@MasaccioEWRT @tribelaw: Alito’s Five Fallacies: 1. Women’s lives won’t be turned upside down 2. We are just returning this issue to the states 3. “On…11 hours ago23 May 2022
Ed Walker 🍞🌹💉💉@MasaccioEWRT @josefmtz: this paragraph is brutal. we truly are in an “emperor has no clothes” point in history pic.twitter.com/XWhBwdMdH312 hours ago23 May 2022
RayneToday@raynetodayLOL Perhaps the mythical "single server" the right-wing wanted turned over after the DNC was hacked already resides… twitter.com/i/web/status/1…1 day ago22 May 2022
RayneToday@raynetodayRT @darth: i know this is completely unrelated but imagine spending nine fuckin hours with that guy3 days ago21 May 2022
RayneToday@raynetodayRT @wyatt_privilege: Not a mind blowing observation but the game now is to send crazy shit upstairs to scotus and invite them to remold, sc…5 days ago19 May 2022

While Lindsey Graham Was Stalling Merrick Garland’s Confirmation He Was... The Pandemic Super Bowl LV