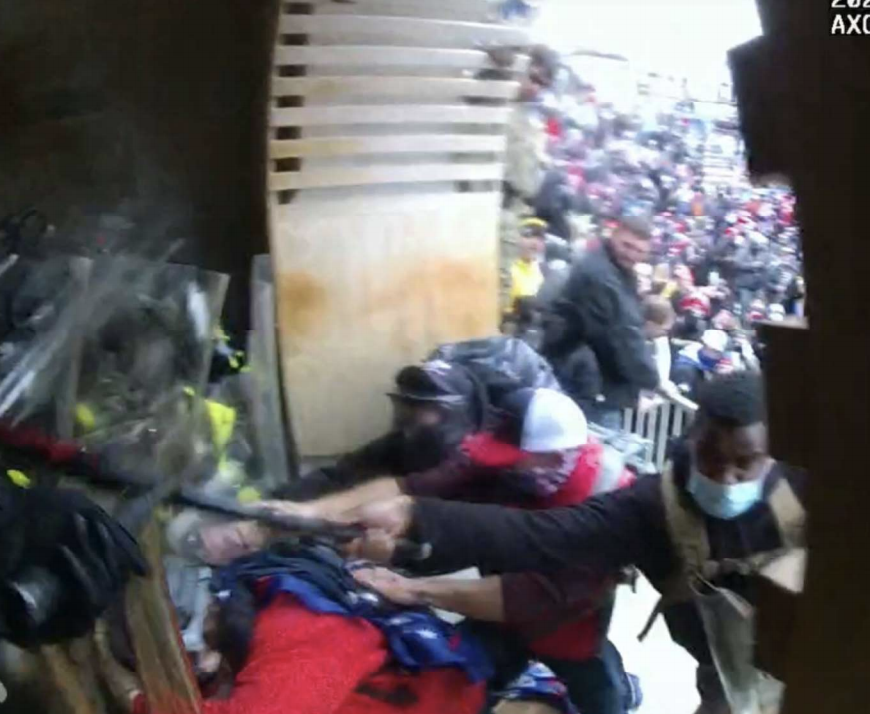 There continue to be efforts to make grand judgments about the January 6 insurrectionists base off a review of the ~207 people who have been charged federally thus far. In my opinion, that’s a mistaken effort, unless the analysis breaks the current arrestees up into groups, first by excluding the 100 or so people just charged with trespassing crimes, who will appropriately be treated as people who engaged in civil disobedience.

Of the rest, there are maybe 25 who are members of an identified militia group. But that group is just a fraction of the total numbers of militia members we should expect will be arrested, because anyone in the Capitol or who planned to halt the vote certification can be charged, and we know of the people who joined Jessica Watkins’ Oath Keepers’ formation, as well as a busload of others from North Carolina. Plus, there are at least 10 more Proud Boys — probably significantly more — identifiable from videos as active participants. In other words, the number of militia members will continue to grow.

There’s another set of people — like Zip Tie Guy (Eric Munchel) and his mother — not known to have ties to militia (though definitely friendly to them), but who took actions that DOJ seems to treat more seriously. So, too, are the people — many of them women — who directed and instigated the crowd.

But there are another two sets of people that the FBI is clearly pursuing, of whom just a fraction have been arrested and identified so far. One is the group of people wanted for assaulting the media (AOM in the FBI’s wanted pictures), which is reportedly being led by a special group at DOJ. There are about 27 people identified in this group right now, none of whom have yet been arrested).

A more obvious one are people who’ve assaulted cops (just three of whom so far have ties to militia groups), identified by AFO at the FBI site. Multiple reports say that around 139 cops were assaulted on January 6. Just 26 people have been charged with either 18 USC 111 for assaulting a cop, or in closely related charges. Meanwhile, there are roughly 134 BOLO images of people who are suspected of assaulting cops, meaning there may be over 100 people suspected of assaulting cops on January 6 at large right now. All told, they would make up over a third of Federal suspects, yet most haven’t been arrested yet.

Here’s my running list of the people who, as of 2/22, had been charged with intimidating or assaulting police. I’ve also tracked how the FBI found them — whether by a tip based off Social Media, a law enforcement tip (this group includes several felons), those FBI BOLO posters, or some other means.

One reason I made this effort was to show that many of these people were identified via other means, and really a big number of people remain on the FBI’s BOLO list.

Unsurprisingly, more people on this list have tried to destroy evidence or flee, meaning it will likely take more time to find them all. There’s also reason to believe that the FBI would prefer to wait to charge these people until they’ve shored up their case.

There are a few more cases that were originally charged as 18 USC 231 that I suspect may get charged as 111 after indictment (which has happened with DeGrave, Sandlin, and Miller), including these.

Hughes brothers (BOLO 42 and others)

Here are some other notable arrests for which the FBI released a BOLO. Note that the first 30 or so of those posters weren’t targeted to a particular crime, but some — like bullhorn lady Rachel Powell — were identified as AFO in their BOLO but not charged that way.