Roger Stone Denies Palling Around with Alleged Terrorists [on January 6] 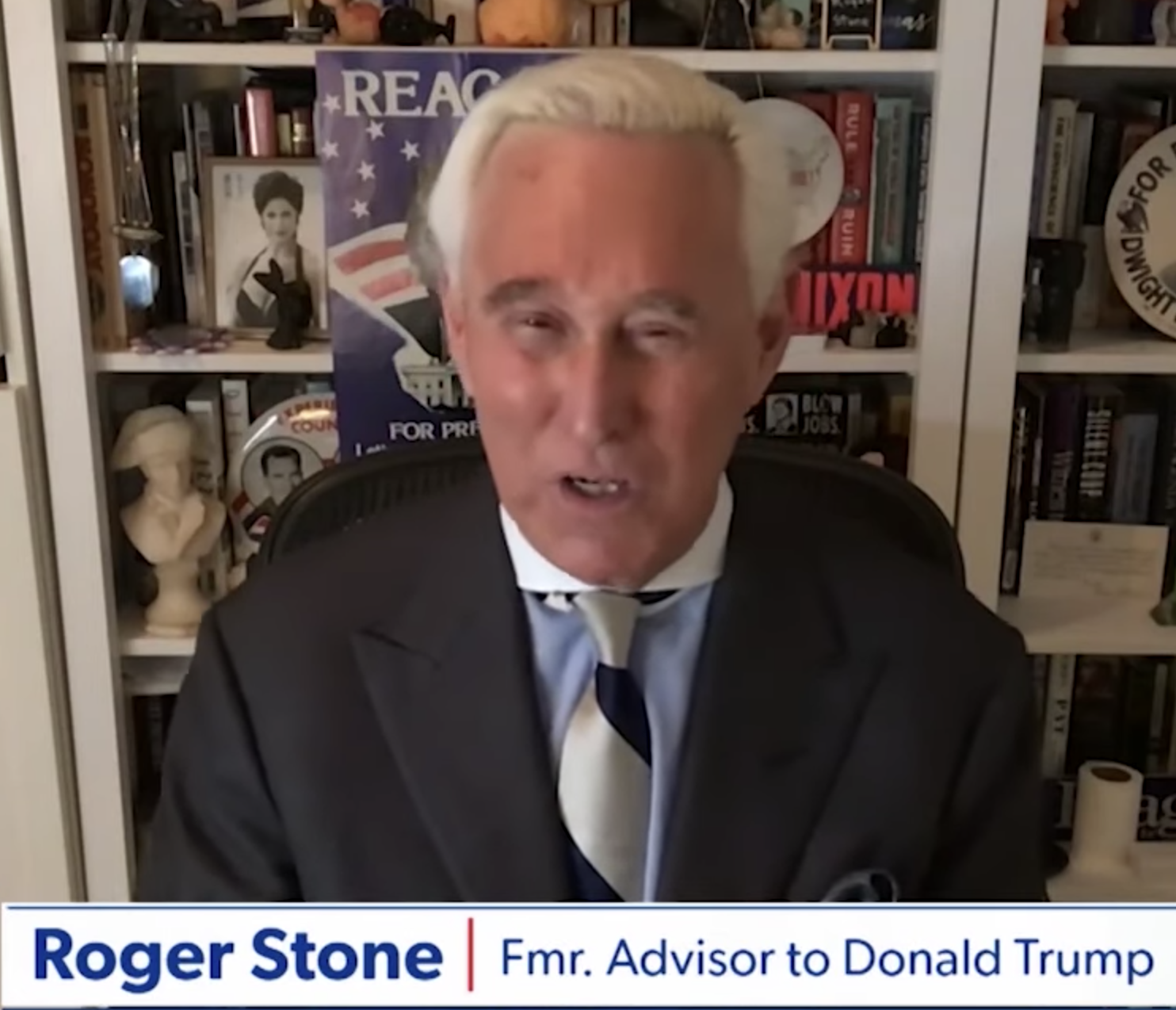 On Sunday, the NYT had a really good piece showing that six members of the Oath Keepers that “guarded” Roger Stone on January 5 and 6 went on to participate in the insurrection. Curiously, most don’t obviously show up in the FBI BOLO pictures and the face of at least one was cut off in a larger picture of Oath Keepers, which I suspect means the FBI doesn’t want to advertise any interest they have in them.

Even before the NYT report, in response to CNN and ABC reporting on his ties to the Oath Keepers, Stone wrote a rebuttal disclaiming any tie to their actions on January 6.

The rebuttal starts and ends with lies about the Mueller investigation, claiming they found no proven link with WikiLeaks when in fact the release he talks about showed multiple ongoing investigations (that is in March 2019) into his role in the Russian CFAA hack, and then claiming he was investigated for treason, and not conspiracy.

These are the very same news outlets who failed to report that their previous claims against me – that I was aiding the Russian state or a collaborator with Wikileaks proved to be completely false according to the US Justice Dept. Those who made those accusations failed to report the court-ordered disclosure by the DOJ, the last actions of Mueller’s report in which they admitted they had no such evidence whatsoever and even if they had proven a link between me and Wikileaks, which they found no evidence of, those activities would not have been illegal.

The very same fake news media outlets who defamed me and insisted falsely that I was guilty of treason and other high crimes and then failed to acknowledge that an unlimited $30 million-dollar investigation provided no such evidence now seek to use me a clickbait and an easy target with entirely false allegations that I had any role whatsoever in the politically stupid, destructive and illegal acts that took place at the US Capitol on January 6th.

So we should assume that in spite of Stone’s self-publicized recommitment to Catholicism, he continues to lie as blatantly as he always has.

Consider how he denies any involvement in events that have been charged — against the Oath Keepers as well as against Stone’s buddies in the Proud Boys — as a conspiracy to hinder the official proceeding of counting the certification of the Electoral College vote. One strand of his defense is that he didn’t leave the hotel on January 6 until he left for his plane (reportedly, because his speech at the rally had been cut).

These jackals in the media, who know better, again make baseless accusations against me using conjecture and “guilt by association” to imply that I was somehow involved in the illegal events of January 6th. I was not present, I knew nothing about them and denounced them on my now-defunct PARLER feed when I saw the images on TV.

The claims by these so-called journalists are categorically false as I was not present on the Ellipse, did not march to the Capitol, was not on the Hill and, like AOC was not at the Capitol that day.

In fact, other than the brief moments out in front of the Williard Hotel which CNN falsely reported I was departing from, I never left the Williard Hotel property because Hotel management prohibited congregating in the lobby due to the Mayor’s Covid 19 restrictions. Therefore I never left the hotel property on January 6th until leaving for Dulles Airport around 6:00 P.M.

In fact, I never left the grounds of the Willard Hotel.

I stepped outside briefly when the hotel objected to anyone congregating in the lobby due to Covid-19 declarations by the Mayor.

Of course, that’s only a denial about his actions on January 6. The conspiracies charged against the Oath Keepers and the Proud Boys began weeks earlier, in preparation.

He spends a good deal of time denying he knew of any wrong-doing from the Oath Keepers and — thrown in once almost as an afterthought — the Proud Boys.

CNN rushes to characterize the Oath Keepers as criminals, which I have not seen any evidence of, and to my knowledge has never been proven in any court. I reserve the right to change my opinion if anything surfaces, which I am unaware of today. Based on what I have seen to date, ABC, CNN, and all of the low-rent left-wing advocacy news/smear sites are engaged in one vicious “guilt by association” campaign of distortion and baseless conjecture.

If the Oath Keepers are the terrorists as some in the media claim and were involved in the planning and execution, I was not aware of any such thing.

I know of no wrongdoing by the Oathkeepers or the Proud Boys.

But he’s talking about whether they are criminals, terrorists, or engaged in wrong-doing, not if they engaged in a concerted plan to disrupt the counting of the Electoral College vote.

He does, ultimately, say that if there’s credible evidence of a conspiracy against them, they should be charged for that (in statements on Parler that have since been deleted, he condemned the violence).

It’s that line about a conspiracy I find most curious, given thats what has been charged. In the video from January 6, someone asks him if “we have this today.” He responds, seemingly acknowledging common understanding of what “this” is, “We shall see.” That’s the kind of intent that shows up in social media that DOJ has cited in charging documents.

More interestingly, Stone admits he raised money for security for January 6 (an observation MoJo’s Dan Friedman made), but says that the people guarding him were, instead, volunteers. The Oath Keepers’ recruiting post for the day actually invoked Stone’s name in talking about their “security” function.

Just as we have done at all the previous rallies in DC since the election, Oath Keepers volunteers will be conducting PSDs for multiple high profile speakers over both days, and our teams will be either directly responsible for event security or assisting event security on both days.   We will also have roving teams out that will be on the lookout for Antifa/communist terrorists who like to attack the weak and vulnerable.  We will be providing free security escorts to any patriot who needs one, into the night.   Just be on the lookout for men wearing our Oath Keepers hats, shirts, or patches, and ask them for help, and they will help you.    Our ethos is “first ones in, last one’s out” and we will stay out as late as we have to in order to keep the vulnerable safe from Antifa street thug terrorists.

As always, while conducting security operations, we will have some of our men out in “grey man” mode, without identifiable Oath Keepers gear on.   For every Oath Keeper you see, there are at least two you don’t see.   That keeps the bad guys uncertain of how many of us there are, or where we are.

Over the years, Oath Keepers has conducted hundreds of highly successful volunteer security operations all over the nation, protecting patriots from communist terrorist assault.  From the streets of Berkely, [sic] CA (two separate rallies), to Portland, Boston, Washington DC (six times and counting), Dallas, Austin, Sacramento, etc, including providing volunteer security escorts outside twelve Trump campaign rallies, and many PSD details for high profile VIPs, such as Roger Stone, as well as many elected officials and election fraud whistle-blowers and patriot office holders.   Our men are skilled “quiet professionals” who take pride in doing their work efficiently and effectively, without drama. [my emphasis]

Remember: way back during Stone’s Stop the Steal 2016 incarnation, there were questions about the propriety of his fundraising, and the government showed at Stone’s trial that Stone was asking Rick Gates for lists and asking Steve Bannon, while he was Campaign CEO, for help getting funding from Rebekah Mercer. This time around, he explicitly raised money, but says it didn’t get spent, on what would be funds for people who ended up having a key role in the attack.

For conspiracies that started months ago, the question is not whether Roger Stone was at the Capitol swinging a baseball bat on January 6. The question is whether he entered into an agreement to disrupt the constitutionally mandated official event of counting the votes and took overt acts — before January 6 or on that day — to advance that goal.