A Tale of Two Zip Tie Guys: The Different Fates of Eric Munchel and Larry Brock 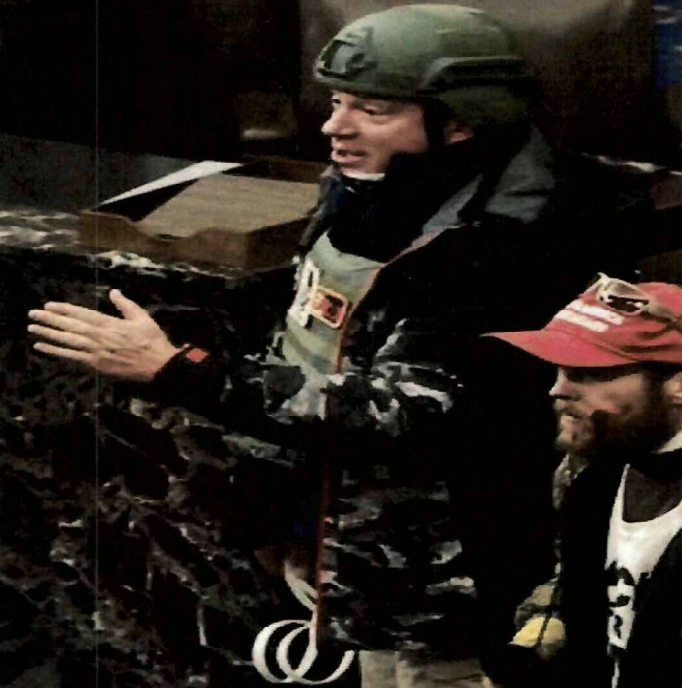 I’ve been following the case against Zip Tie Guy, Eric Munchel, and his mother closely. Last week, they appealed their pre-trial detention to the DC Circuit, in which is likely to be one of the first Circuit challenges to DOJ’s interpretation of this case, and one that is definitely a close case.

Last week, there was a development in the case against the other Zip Tie Guy, retired Air Force Lieutenant Colonel Larry Brock. Like Munchel, Brock showed up in videos on the Senate floor kitted out, wielding zip ties. Like Munchel, Brock voiced radical views, including a willingness to sacrifice himself for Trump before the insurrection.

Two family members and a longtime friend said that Brock’s political views had grown increasingly radical in recent years. Bill Leake, who flew with Brock in the Air Force for a decade, said that he had distanced himself from Brock. “I don’t contact him anymore ’cause he’s gotten extreme,” Leake told me. In recent years, Brock had become an increasingly committed supporter of Donald Trump, frequently wearing a Make America Great Again hat. In the days leading up to the siege of the Capitol, Brock had posted to social media about his plans to travel to Washington, D.C., to participate in Trump’s “Save America” rally. Brock’s family members said that he called himself a patriot, and that his expressions of that identity had become increasingly strident. One recalled “weird rage talk, basically, saying he’s willing to get in trouble to defend what he thinks is right, which is Trump being the President, I guess.” Both family members said that Brock had made racist remarks in their presence and that they believed white-supremacist views may have contributed to his motivations.

His social media posts even mentioned the Oath Keepers and Three Percenters.

Unlike Munchel, Brock also made it to Pelosi’s office, though he denies entering it.

But on Friday, DOJ filed an information against Brock. While the information adds trespassing charges — six in total — it didn’t add felony charges. That’s fairly remarkable, because those who, like Brock, evinced a willingness to do extreme things to keep Trump in power have typically been charged with obstructing the certification of the vote. The same is true of those who made it to the floor of the Senate.

It’s definitely too early to tell (indeed, fairly recently, prosecutors said they weren’t prepared to talk plea deals). But this has all the appearance of someone who is preparing to plead guilty, presumably with a cooperation deal.

I would hope all these tea leaves suggest that Brock is about to flip, and not just for investigative reasons. If a retired officer were to get special treatment this early in the investigation, it would bode poorly going forward. For now, we can say that the two Zip Tie Guys are facing different fates.

Update: Later in the day, April Ayers-Perez (who appears to be a detailee from another US Attorney’s office) replaced Baset on Brock’s case.

Update: Today Brock pled not guilty to the trespass charges against him, suggesting this is, in fact, just an apparently inexplicable preferential treatment of a privileged defendant.