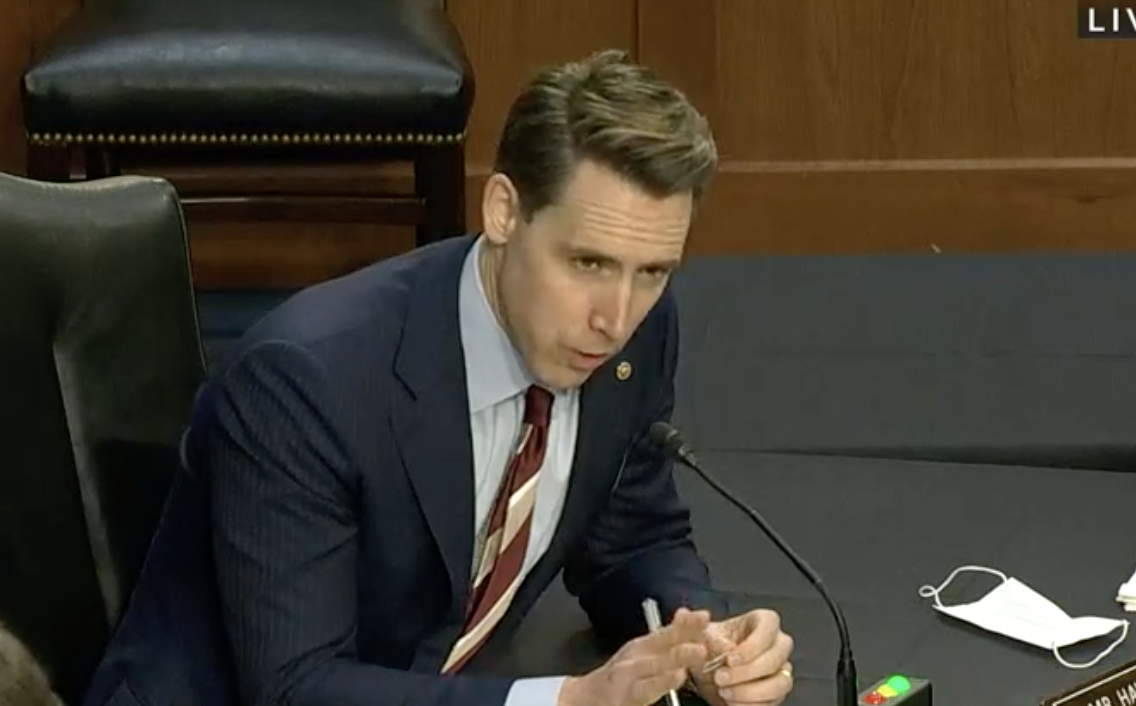 There wasn’t much useful oversight in the Senate Judiciary Committee hearing with FBI Director Christopher Wray today. Democrats got him to repeat, over and over, that there is no evidence that Antifa or people only pretending to be pro-Trump were behind the January 6 insurrection. But there was almost no mention of Trump as the unifying force behind the disparate groups there. Instead of talking about how the Former President’s lies riled up the insurrection, Ben Sasse focused on people in their mother’s basement and grandmother’s attic.

There was a lot of focus on how a January 5 FBI report predicting that Congress might be targeted got disseminated, but none on why the FBI didn’t know what the rest of us did much earlier than that: that these unhinged terrorists were coming to DC in large numbers. No one raised QAnon until Wray dodged Richard Blumenthal’s questions about whether members of Congress pushing QAnon conspiracies exacerbate the problem.

Lindsey Graham and John Kennedy tried to score points because someone didn’t activate the National Guard in time, all the while pretending not to understand that the single person in DC who had unquestioned authority to order the Guard to the Capitol, but did not, was the Commander in Chief at the time.

Things got really weird when Republicans expressed concern about surveillance.

Mike Lee — who actually is a champion of civil liberties — suggested the only reason why right wingers might have been interviewed by the FBI would be by geolocating those who attended the rallies, even if they didn’t enter the Capitol. Then he bizarrely asked if the legal process behind such surveillance was FISA, which targets foreign threats, or National Security Letters.

Hawley, who’s not a champion of civil liberties and normally likes to beat up social media companies, asked a series of questions that seemed utterly ignorant — shocked really — how over the course of arresting almost 300 people, the FBI would show probable cause to obtain geolocation data, metadata, financial data, and social media data.

Hawley: Can I just go back to a series of questions that Senator Lee asked you? He asked you about the geolocation and metadata aspect gathering related to, gathering of metadata, that is, related to your investigation of the January 6 riot. You said you weren’t familiar with the specifics. Can I just clarify your responses to him. So when you say you’re not familiar, are you saying you don’t know whether the Bureau has scooped up geolocation data, metadata, records from cell phone towers. Do you not know. Or are you saying that the Bureau maybe has or hasn’t done it. Just tell me what you know about this?

Wray: So when it comes to geolocation data specifically — again, not in a specific instance, but even the use of geolocation data — I would not be surprised to learn but I do not know for a fact that we were using geolocation data under any situation in connection with the investigation of January 6. But again, we do use geolocation data under specific authorities in specific instances. Because this is such a sprawling, that would not surprise me. When it comes to metadata, which is a little bit different, obviously than geolocation data, I feel confident that we are using various legal authorities to look at metadata under a variety of situations. But, again, the specifics of when, under what circumstances, with whom, that kind of thing, I’m not in a position to testify about with the sprawl and size of the investigation. And certainly not uh in a, you know, Congressional hearing.

Wray: Well, we have various forms of legal process we can serve on companies that will allow us to get acc–

Hawley: And that’s been done?

Wray: We’re using a lot of legal process in connection with the investigation, so, yes.

Hawley: But, specifically, serving, serving process on companies, using, invoking your various legal powers to get that data from companies, that’s been, that’s been done, of gathering this data?

Wray: In gathering metadata? I, I,

Wray: Again, I don’t know the specifics, but I feel confident that that has happened because metadata is often something that we look at. And we have a variety of legal tools that allow us to do that under certain circumstances.

Hawley: What about the cell tower data that, uh, was reportedly scooped up by the Bureau on the day, during, in fact, while the riot was underway. What’s happened to, what’s happened to that data? Do you still have it. Has it been retained? Uh, do you have plans to retain it?

Hawley: Well, how — here’s what I’m trying to get at, I think it’s what Senator Lee was trying to get at. How are we going to know what you are doing with it, and how are we going to evaluate the Bureau’s conduct if we don’t know what authorities you’re invoking, what precisely you’re doing, what you’re retaining. I mean, this is, you said to him repeatedly you weren’t familiar with the specifics, you’ve now said it to me. I don’t know, I’m not sure how this committee is supposed to evaluate anything that the Bureau is doing — you’re basically saying just “trust us.” I mean, how are we gonna know? Do we have to wait until the end of your investigation to find out what you’ve done?

Wray: Well, certainly I have to be careful about discussing an ongoing investigation, which I’m sure you can appreciate. Uh, but, uh, all the tools that we have done in conjunction with prosecutors and lawyers from the Justice Department. Now, if there’s information we can provide you, before an investigation’s completed that goes through what some of the authorities we have, the tools we have, etcetera we could probably provide some information like that that might be useful to you to help answer the question.

Hawley: That would be helpful. Thank you. I’ll hold you to that. Let me ask you about some other things that have been reported, um in the press, particularly there have been a series of reports that the Bureau has worked with banks in the course of the investigation into the January 6 riot, both before and after, and that some banks, particularly Bank of America, may have handed over data for 200 plus clients who may have used their credit or debit cards to make purchases in the DC area. What do you know about this? Has Bank of America voluntarily turned over information to the Bureau about its customers?

Wray: I don’t know of any of the specifics so I’d have to look into that.

Hawley: And so has the FBI requested similar information from any other companies to your knowledge?

Wray: Again, sitting here right now, I do not know the answer to that question. I do know that we work with private sector partners, including financial institutions in a variety of ways, all the time, in a variety of investigations. But exactly the specifics of what may or may not have happened here? That I don’t know sitting here as we’re talking today.

Hawley: As I’m sure you can appreciate, my concern here is that 12 USC 3403 prohibits financial institutions from turning over confidential client records, unless of course they’ve got reasonable suspicion that there’s a crime being committed. Now the news reports on this have reported that financial institutions were doing this in cooperation with the Bureau without any such indication of a crime, they’re just turning over reams of consumer data. That obviously would be a major legal problem. A major legal concern. Can you try and get me some answers to these questions? I appreciate you say you don’t know today, you’re not aware of what’s going on, but can you look into this and follow-up with me on this?

[Wray acknowledges that the FBI has many authorities]

Hawley: What about the, some of the technology companies, Facebook, Google, Twitter, Apple, Amazon. Has the the FBI had contact with those tech platforms following the events of the Sixth?

Wray: We’ve certainly had contact with a number of the social media companies in connection with the Sixth. So that much I know.

Hawley: Has the Bureau sought to compel any of those companies to turn over user data related to the Sixth?

Wray: Well, again, I can’t tell you the specifics here, but what I will tell you is that we, I feel certain that we have served legal process on those companies which we do with some frequency and we have received information from some of those companies. And whether that’s true from every single one of the companies you listed I can’t say for sure but I suspect it is, because we work with the Social Media companies quite a lot.

Hawley: Are you aware of any of the companies voluntarily turning over data to the Bureau in relationship to the events of the Sixth?

Wray: Sitting here right now, I can’t say for sure.

I knew when I read The Intercept piece making thinly sourced allegations that this would happen, that right wingers trying to protect right wing terrorists and possibly even themselves would profess shock that the FBI used very basic investigative techniques to investigate an attack on the Capitol (Hawley seems to be relying, as well, on Fox News reports, including Tucker Carlson).

But I find it shocking that the former Attorney General of Missouri, with an office full of staffers, can’t review the arrest documents for the 270 people publicly arrested so far to answer these questions. Had he done so, he would have seen that affidavit after affidavit talks about obtaining warrants, including (for non-public data) from Facebook. And the single reference to Bank of America I can think of — describing Kelly Meggs paying for rooms in VA and DC in conjunction with the attack — makes it clear that the FBI used some kind of legal process.

Records obtained from the Comfort Inn in Arlington, Virginia, show that a credit card belonging to Kelly Meggs was used to pay for a room at the hotel on the nights of January 5 and 6, 2021.21 The room, with two queen beds, was booked in the name of a different person suspected of being affiliated with the Oath Keepers.

21 Pursuant to legal process, the government obtained records from Bank of America, which show two charges to the Comfort Inn on January 5, 2021, each for $224. The records also show that on January 7, 2021, Kelly Meggs paid a charge of $302 to the Hilton Garden Inn, located at 1225 First Street NE, Washington, D.C.

A grand jury has already found that these credit card charges — the coordinated spending of people who forced their way into the Capitol wearing tactical gear after providing “security” for right wing figureheads — was evidence of a conspiracy, “to stop, delay, and hinder Congress’s certification of the Electoral College vote.”

And the Senator from Missouri who shared that goal seems awfully concerned that the FBI is using very routine legal process to investigate the larger conspiracy.

Journalists May Be Most at Risk (as Described) from a Presumed January 6 GeoFence... The Passport and the Antifa Hunt: The Militia Counter-Stories Emerge