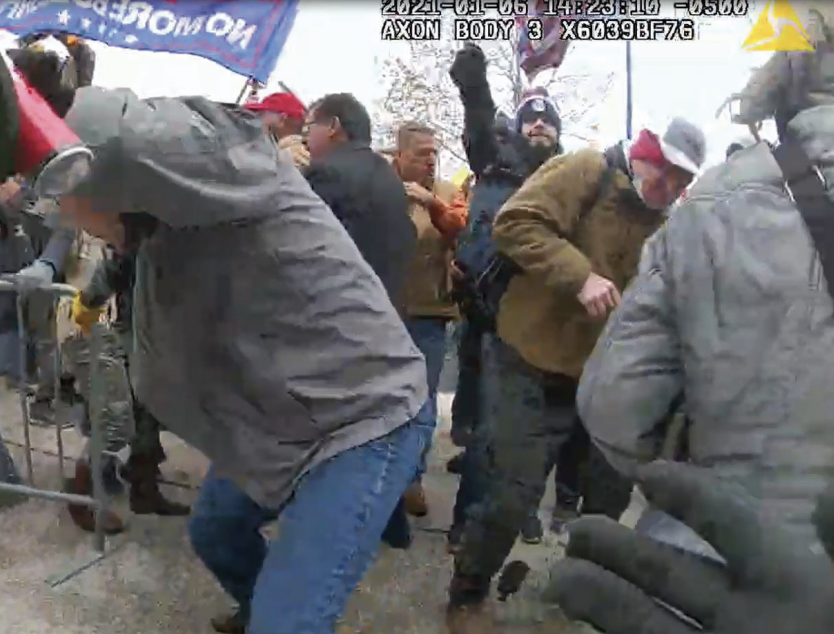 According to the affidavit in support of the criminal complaint, Khater and Tanios were at the U.S. Capitol on Jan. 6, 2021, and were observed in video footage working together to assault law enforcement officers with an unknown chemical substance by spraying officers directly in the face and eyes.  During the investigation, it is alleged that law enforcement discovered video that depicted Khater asking Tanios to “give me that bear s*it.” Tanios replied, “Hold on, hold on, not yet, not yet… it’s still early.”  Khater then retrieved a canister from Tanios’ backpack and walked through the crowd to within a few steps of the police perimeter.  The video shows Khater with his right arm up high in the air, appearing to be holding a canister in his right hand and aiming it at the officers’ direction while moving his right arm from side to side.  The complaint affidavit states that Officers Sicknick, Edwards, and Chapman, who were all standing within a few feet of Khater, each reacted to being sprayed in the face.  The officers retreated, bringing their hands to their faces and rushing to find water to wash out their eyes.

The substance Khater allegedly sprayed caused scabs on the face of one of the officers hit, Officer Edwards, for weeks. All struck with it said the substance was as strong as anything they’ve encountered in their experience as police officers. In addition to assault charges, both were charged with conspiracy to assault police reflecting a degree of planning and intentionality.

Finding The Public In A Complex Society The FBI Was Still Collecting Evidence Yesterday that Might Explain Brian Sicknick’s...