In the 86 minutes after the Capitol Police first asked for help from the National Guard on January 6, police had to drop two arrests of violent rioters, and three cops — including Brian Sicknick — were temporarily disabled after being sprayed with “bear shit.”

At 1:49 on January 6, Capitol Police Chief Steven Sund asked the Commander of the DC National Guard, General William Walker, for urgent help pushing back the riot attacking the Capitol. According to Walker’s testimony, he loaded Guardsmen onto busses to be able to respond as soon as he got authority, but that approval was not granted and communicated to him for over three hours. Walker testified that he could have reinforced the Capitol within 15 minutes, and indeed, once DOD granted approval, according to Walker’s testimony the Guard arrived within 20 minutes (DOD says it took almost 40 minutes).

At 1:49pm I received a frantic call from then Chief of U.S. Capitol Police, Steven Sund, where he informed me that the security perimeter at the Capitol had been breached by hostile rioters. Chief Sund, his voice cracking with emotion, indicated that there was a dire emergency on Capitol Hill and requested the immediate assistance of as many Guardsmen as I could muster.

Immediately after the 1:49pm call with Chief Sund, I alerted the Army Senior Leadership of the request. The approval for Chief Sund’s request would eventually come from the Acting Secretary of Defense and be relayed to me by Army Senior Leaders at 5:08pm – 3 hours and 19 minutes later. We already had Guardsmen on buses ready to move to the Capitol. Consequently, at 5:20pm (in under 20 minutes) the District of Columbia National Guard arrived at the Capitol.

Had DOD worked the way they had in the past then, the Capitol Police might have had reinforcements from the Guard at the Capitol by around 2:10 PM.

About five minutes after the time General Walker says the Guard could have arrived, around 2:15, Hunter Ehmke allegedly started trying to punch through a window from a ledge outside the Rotunda.

Officer Fluke observed Ehmke pointing towards the window, followed by looking at the crowd to his south and waving his hand as if to summon others over to his position. Ehmke repeated the sequence of gestures again. Officer Fluke shouted out, “They’re going to break the window” during this time in hopes to bring attention from fellow officers.

An officer who saw what Ehmke was doing looked at the hundreds of rioters he was trying to repel then back towards Ehmke, only to see that Ehmke had punched the window and broken it.

Officer Fluke looked east to focus back on the crowd pushing on the shields and gave orders for the growing crowd to get back. Officer Fluke turned to look north again and observed Ehmke with a balled fist, pulling his arm back and twisting his upper body. Ehmke then swung forward striking a pane of the window about shoulder level of Ehmke. Officer Fluke began to run toward Ehmke while continuing to hold his shield in both hands.

Officer Fluke managed to knock Ehmke down and two other officers came to help arrest him. Others attempted to set up a perimeter to protect the now-broken window and create space for an arrest. But as confrontations elsewhere grew more urgent and a crowd started demanding that the cops let Ehmke go, police released him and told him not to come back.

As the officers discussed an action plan, the disturbance caused individuals of the crowd facing the Rotunda doors to divert their attention towards the approximately 10 officers in the northwest corner of the landing. Individuals in the throng began to show aggression by pointing fingers and shouting obscenities. One unidentified individual threatened Officer Fluke and the other officers, stating “you’re not leaving with him”, while pointing in the direction of Officer Fluke and Ehmke. Due to the growing aggression of the large crowd that far outnumbered the officers and the exigent circumstances at the time, officers made the decision to allow Ehmke depart under his own power. 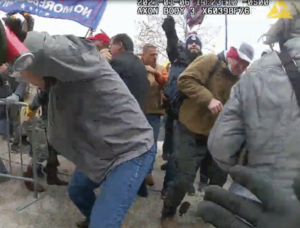 Eight minutes after the confrontation with Ehmke began, at 2:23, Julian Khater and others were wrestling with police over a set of bike rack barriers. Khater appears to have sprayed what he had called, “bear shit” towards the cops. Three cops, including Brian Sicnick, withdrew from their position. All three took at least 20 minutes recovering from the toxic spray before they could return to the fight against the insurrectionists.

In reviewing the surveillance footage and BWC video, your affiant observes that Officers Sicknick, Edwards and Chapman, who are standing within a few feet of KHATER, all react, one by one, to something striking them in the face. The officers immediately retreat from the line, bring their hands to their faces and rush to find water to wash out their eyes, as described in further detail below and as captured in the following screen shots. 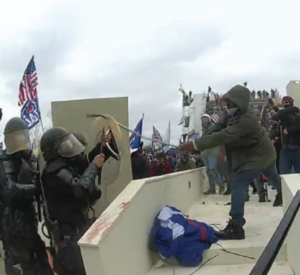 While Sicknick returned to his work, that spray may have contributed to his death.

About eight minutes after Khater sprayed Sicknick and two others, starting at 2:31, Mark Ponder appears on camera beating an officer’s shield with a pole. After he broke that pole, he found another more substantial one.

Moments later, shortly before 2:32 p.m. PONDER reemerges from the crowd holding another long pole. This second pole appears to be thicker than the first pole and is colored with red, white, and blue stripes.

17 minutes after Ponder first grabbed the pole, at 2:49, he started swinging it more aggressively at individual cops, striking one.

As PONDER swings the pole in the direction of the officers, he struck Officer #3 once in the left shoulder.

Officer 3 and others tackled Ponder and started moving to arrest him. They found his ID at 3:03, but Ponder apparently lied about where he currently lived. By 3:15 — 86 minutes after Sund first requested assistance — the officers learn there’s no transport available to complete the arrest of Ponder at that time. So, as happened with Ehmke less than an hour earlier, the cops let him go, instructing him not to come back.

Ponder remained at the riot for almost two more hours.

At 4:32, according to DOD’s timeline, Acting Secretary of Defense Christopher Miller approved a deployment of the Guard to help at the Capitol. General Walker didn’t receive that order for another 30 minutes. Sometime between 5:20 (per Walker) and 5:40 (per DOD), the Guard arrived at the Capitol and started to help.

That is, in the first 86 minutes of the three hour period between when Sund asked for help and the Guard showed up, police moved to arrest two violent insurrectionists, only to be forced to let them go, and (as NYT had noted in a story some time ago), Brian Sicknick was sprayed with a toxic substance that may have led to his death.

It took 70 days for the FBI to track Ponder down after he was first released, and almost as long — 67 days — to arrest Julian Khater (likely delaying efforts to identify of the substance used against Sicknick in the process). Part of that delay must be attributed to the three hours it took DOD to provide relief to the Capitol Police.