The State of the Five Now-Intersecting January 6 Militia Conspiracies 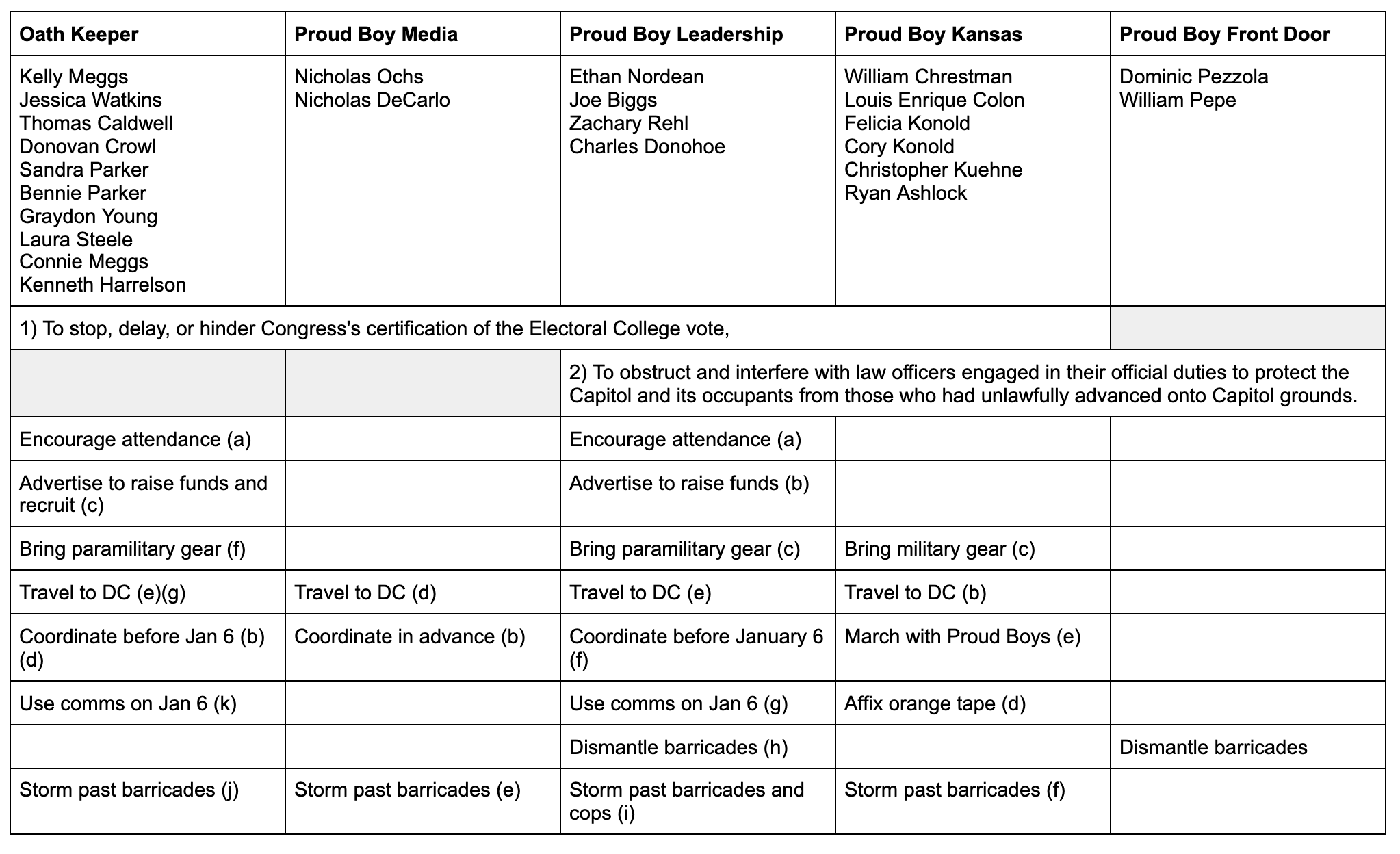 Paragraph 64 of a new conspiracy indictment including Proud Boys Ethan Nordean, Joe Biggs, and the newly arrested Proud Boys Zachary Rehl and Charles Donohoe includes a seemingly gratuitous reference to the Oath Keepers. The paragraph describes how Biggs, after having entered the Capitol once already from the northwest side, then moved to the opposite side of the building and forced his way in on the east side. He did so right in front of a group of Oath Keepers.

Thirty minutes after first entering the Capitol on the west side, BIGGS and two other members of the Proud boys, among others, forcibly re-entered the Capitol through the Columbus Doors on the east side of the Capitol, pushing past at least one law enforcement officer and entering the Capitol directly in front of a group of individuals affiliated with the Oath Keepers.

This would have been around 2:44 PM. The Oath Keeper “stack” went in the east side of the Capitol at around 2:40.

That reference, along with the common use of the Zello application, brings two parallel conspiracies laid out over a month ago closer together, arguably intersecting. As of right now, DOJ has charged 25 people in five different conspiracy indictments, four of which share precisely the same goal: to stop, delay, and hinder Congress’s certification of the Electoral College vote, with many similar means and methods. Three conspiracy indictments also share roughly the same goal of obstructing law enforcement. Those indictments are:

Here’s what a simplified version of the five different conspiracies looks like: 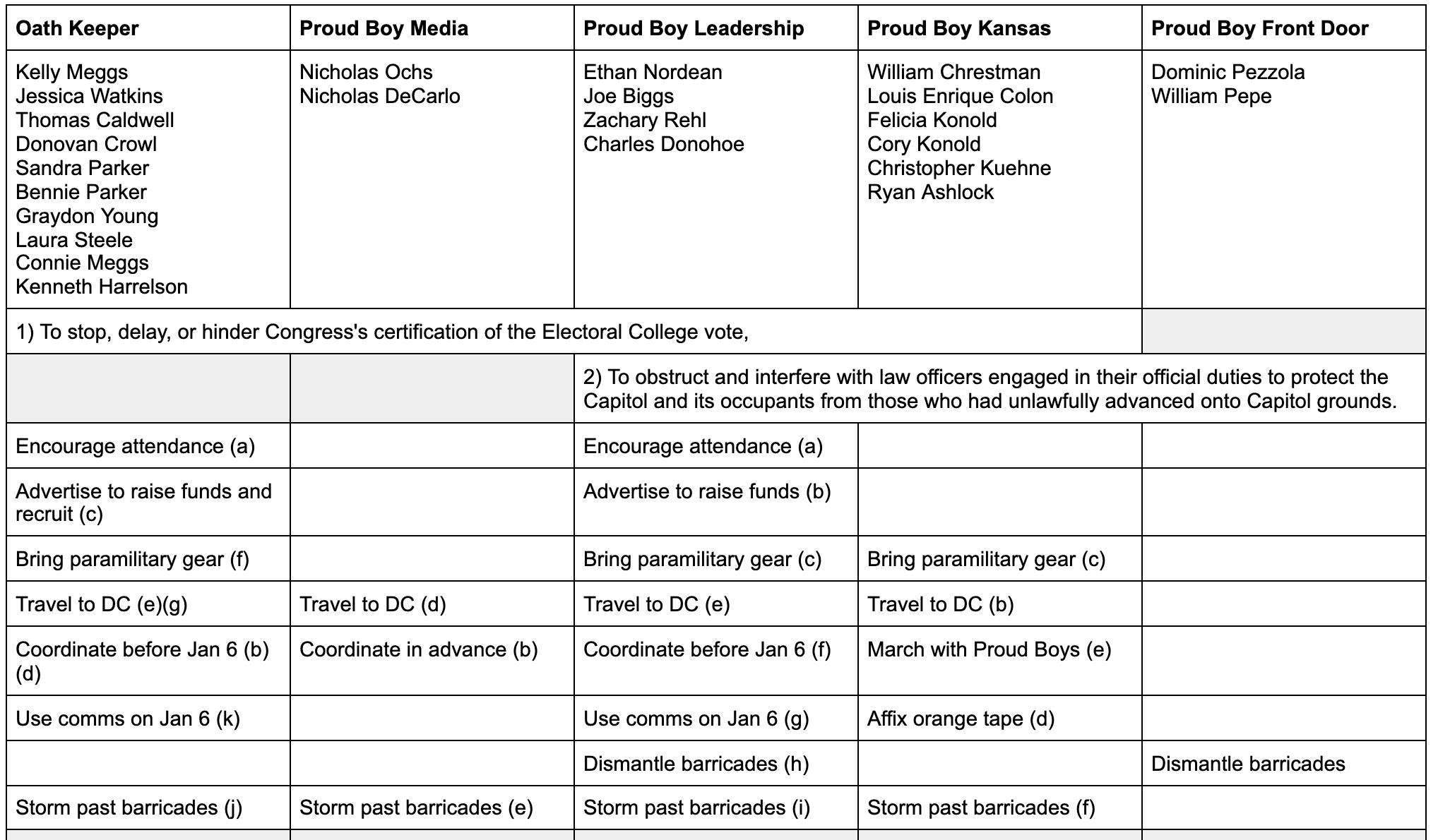 This is not the end of it: there are three Oath Keepers not included in that conspiracy, and a random bunch of Proud Boys who might eventually be included, as well as anyone else who coordinated this effort [wink]. But these conspiracy indictments will remain separate only for prosecutorial ease. They are, for all intents and purposes, now-intersecting conspiracies.

Update: Last night, NYT’s visual team released new videos showing that the Oath Keepers Stack was involved in forcing entry into the East entrance of the Capitol. These videos depict what happened moments after Biggs reentered the Capitol, as described above.

Update: To see how the other pieces of any coordinated action fit, I will list the other Oath Keepers and Proud Boys that have played a part in this operation.

Stewart Rhodes: The Oath Keeper President. He is not charged, but implicated in the existing Oath Keepers indictment and the Minuta complaint.

Roberto Minuta: Minuta was arrested on March 8. An SDNY Magistrate judge released him on bail (he almost put up silver bars for his security, but ended up coming up with the money itself), ignoring the government request he stay the order. Minuta’s arrest affidavit–which was written 12 days before James’ but executed roughly the same day–focuses primarily on Minuta’s harassment of cops. It doesn’t mention, as James’ affidavit does, Minuta’s role in providing security, including for Roger Stone. Minuta also deleted his Facebook account on January 13, for which he was charged with obstruction.

Joshua James: James was arrested on March 9 and held without bail (in part because of a past arrest associated with claiming to be a military police officer in 2011). His arrest affidavit makes it clear he was a close contact with Minuta as well as Kelly Meggs. The affidavit repeatedly describes James offering security to VIPs we know to include Roger Stone. According to public reporting, James received payment for his “security” services on January 6, which Stone was publicly fundraising for in advance (then denied spending).

Jon Ryan Schaffer: The front man for the heavy metal band Iced Earth and an Oath Keeper lifetime member, Schaffer was arrested for spraying some police with bear spray. But two months after his arrest and detention, he has not been (publicly) indicted and only arrived in DC on March 17. The government has not publicly responded to his motion to dismiss his case on Speedy Trial grounds. All of which suggests there’s something more there that we can’t see.

Person Four: The James affidavit refers to Minuta as “Person Five.” It uses that number, it says, because “Persons Two [Caldwell’s spouse], Three [the NC-based Oath Keeper who might serve as a Quick Reaction Force], and Four are not included in this affidavit, but are already-numbered individuals associated with United States v. Thomas Caldwell, et al, Case No. 21-cr-28 (APM). To maintain consistent nomenclature, the referenced individual here will be defined as ‘Person Five.'” I haven’t been able to find the reference to Person Four (though it might be Watkins’ partner, references to whom are inconsistent).

Enrique Tarrio: Tarrio is the head of the Proud Boys, but got arrested as he entered DC on January 4 on charges relating to vandalizing a Black church in December, onto which possession charges were added. He is referred to in all the Proud Boy conspiracies, repeatedly in the Leader one (because they scrambled to figure out what to do after his arrest). While it’s unlikely he was on the Telegram channels used to organize the insurrection, he was in touch with members via other, thus far unidentified channels.

Joshua Pruitt: Pruitt was arrested for a curfew violation on the night of the insurrection. He told the FBI he hadn’t engaged in any unlawful activity and was just trying to deescalate the situation. But he was indicted on his own weeks later for obstructing the vote count and interfering with cops, and abetting the destruction of property, along with trespassing. The Nordean conspiracy indictment notes that he went in the West entrance shortly after Dominic Pezzola breached it (suggesting the government may now know he was part of a cell with Pezzola). Pruitt is being prosecuted by the same prosecutor as on most Proud Boy cases, Christopher Berridge, and before the same judge, Timothy Kelly.

Gabriel Garcia: Garcia, a former Army Captain, appears to have originally been identified by the Facebook order showing who livestreamed from the Capitol. It’s possible his livestreams were intended to serve as live reporting for those coordinating outside (he catches the names of cops, the size of the crowd, and instructs, “keep ’em coming.” He incites a big push through a line of cops. Later, he calls for “Nancy” to “come out and play” and calls to “Free Enrique” [Tarrio]. He was charged by complaint on January 16 and by indictment on February 16 with obstruction and resisting cops during civil disorder. The Nordean conspiracy indictment notes he went in the West entrance shortly after Pezzola breached it.

Christopher Worrell: The government originally charged Worrell, a committed Proud Boy who traveled to DC in vans of Proud Boys paid for by someone else and wore comms equipment, with trespass crimes on March 10. Among his criminal background, he pretended to be a cop to intimidate a woman. He lied in his first interview with the FBI, hiding that he sprayed pepper spray on some police who were the last line of defense on the West side of the Capitol. According to a witness who knows him, he also directed other likely Proud Boys. After first being released, he was subsequently detained and is awaiting indictment on what the government suggests are likely to be assault charges.

Robert Gieswein: Ethan Nordean spoke to Giswein shortly before he and Pezzola launched the attack on the Capitol suggesting that Gieswein, who had known ties to the 3% movement, was coordinating with the Proud Boys that day. Over the course of breaking into the Capitol, he allegedly assaulted 3 cops with a bat or pepper spray, and broke a window to break in. He was first charged on January 16, indicted on January 27. His docket shows none of the normal proceedings, such as a protective order, but his magistrate’s docket shows two sealed documents placed there in recent weeks.

Ryan Samsel: There’s no indication I know of that ties Samsel to the Proud Boys. But he marched with them and initiated the assault on the West side of the Capitol with Dominic Pezzola and William Pepe. He was charged with assault and obstruction on January 29 and arrested on February 3. In his case, he allegedly did so by assaulting a cop at the first line of barriers, knocking her out. He and the government are in talks for a guilty plea.

Ryan Bennett: Bennett was IDed off his own Facebook livestreaming, while wearing a Proud Boys hat, of the event, including his direct witness to the shooting of Ashli Bennett, with his voice yelling “Break it down!” in the background. He was arrested on January 26 and charged in a still-sealed March 17 indictment over which James Boasberg will preside.

Bryan Betancur: Betancur was busted by his Maryland Probation Officer, to whom he had lied about distributing Bibles to get permission to go to DC. He wore a Proud Boys shirt to the insurrection and is a known white supremacist who espouses violence. He was charged with misdemeanor trespass charges. His defense attorney is already discussing a guilty plea.

Daniel Goodwyn: Goodwyn’s online identity is closely associated with the Proud Boys. He was identified via an interview he did with Baked Alaska during the insurrection and texts sent to an associate; he was arrested on January 29. He was originally charged with trespass, with obstruction added in his indictment on February 24. Charles Berridge was originally the prosecutor on this case but has been replaced on it.

Christopher Kelly: Kelly revealed on Facebook before he headed to DC that he would be going with, “ex NYPD and some proud boys.” While inside, he bragged that they had “stopped the hearing, they are all headed to the basement.” He was originally charged with trespass and obstruction on January 20; he has yet to be (publicly) indicted yet. He has the same defense attorney, Edward McMahon, as Nicholas Ochs.

Around 40 other people who used the Proud Boys “Boots on the Ground” Telegram channel: As I noted here, the government must have at least monikers for — and likely email and/or device identifiers — for around 40 people who used the organizing channel set up less than a day before the operation. It will be interesting to see if they attempt to track all of them down.

Marc Bru, a Proud Boy with ties to Nordean, was charged on March 9.

Paul Rae, a Proud Boy from Florida who trailed Biggs both times he entered the Capitol.

Arthur Jackman: a Proud Boy from Florida who trailed Biggs both times he entered the Capitol, including into the Senate.

How to Arrest Someone (Almost) Entirely Off Social Media The Three Key Details the Proud Boy Unindicted Co-Conspirator Likely Revealed...