Yesterday, DOJ added Roberto Minuta and Joshua James — both of whom provided security to Roger Stone in advance of the insurrection — to the Oath Keepers conspiracy indictment, making a third superseding indictment (S3) against the militia. The showiest part of the indictment describes how Minuta and James rode in golf carts (from where, it doesn’t say, nor does it explain how it knows exactly what Minuta said while on the golf cart escapade) to the Capitol to join in the insurrection.

At about 2:33 p.m., MINUTA, JAMES, and the others in their group parked the golf carts near the intersection of Third Street and Pennsylvania Avenue, Northwest. They then continued on foot towards the Capitol.

But the golf cart vignette is not the most interesting detail in the S3 indictment. The additions on the most recent superseding indictment (S2) are interesting for what the government did and did not add with the inclusion of the two Oath Keepers who were not part of The Stack that breached the Capitol, Minuta and James.

The crimes not charged

In spite of Minuta’s self-description, the government did not charge Minuta with Grand Theft Golf Cart. It’s never actually explained where they got the carts, but the Oath Keepers had been using carts as part of their protection detail for people like Roger Stone. If they used golf carts owned or rented by Stop the Steal or some other organizer for the rally, however, it might implicate those owners in the conspiracy if they didn’t report the golf carts as being stolen as part of an effort to breach the Capitol.

But Grand Theft Golf Cart is only the beginning of crimes not charged against the newest additions to the conspiracy.

In the complaint against Minuta, the government had shown probable cause that Minuta obstructed the investigation by deleting his Facebook account on January 13.

Finally, on January 13, 2021, the week after he attacked the Capitol and after much media reporting on law enforcement’s investigation to bring the Capitol rioters to justice, Minuta deleted his Facebook account of over thirteen years.

Evidence also demonstrates that one week after he participated in forcibly storming the Capitol, Minuta deleted a Facebook account he had maintained for 13 years to conceal his involvement in these offenses.

On January 6, 2021, the FBI opened an investigation into the attack on the Capitol, and a grand jury of the United States District Court for the District of Columbia subsequently opened an investigation. Within the first week of the investigation, a number of subjects were arrested and many more subjects’ photographs were shared over the Internet by both the FBI and regular citizens who took it upon themselves to publicize and seek information about the Capitol attackers.

Records indicate that Roberto Minuta opened a Facebook account associated with phone number XXX-XXX-4147 (known to be associated with Minuta) on November 24, 2007. On January 13, 2021—one week after Minuta and others attacked the Capitol on January 6— Minuta deleted his account.

From the first iteration of this conspiracy indictment, the government had charged others for deleting their Facebook accounts — first Thomas Caldwell, and then Graydon Young. So it would have followed the pattern already set to include a Count 7 against Minuta for his deletion of Facebook.

It’s not in there.

But that’s not the only crime not charged.

The complaint against Minuta focused closely on his taunts against cops in the minutes before The Stack arrived (the government may suspect that Minuta did this to occupy the police while insurrectionists breached the Capitol from the west side, to ensure officers guarding the east side of the building could not go assist those being overrun on the west side). 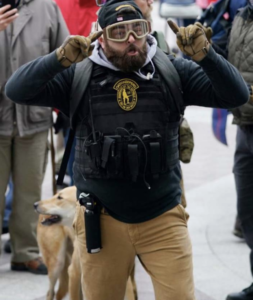 The indictment adds this further interaction between the cops and Minuta.

Other January 6 defendants (not part of this Oath Keeper conspiracy) got charged with obstructing the police during a civil disorder for such physical interactions. Not Minuta and James.

Minuta and James got charged, along with the other members of the conspiracy, with one (but not both) of the trespassing charges used against virtually all the January 6 defendants. But Minuta entered the Capitol with a holster of bear spray (visible on his hip in the picture above). Others who entered the Capitol similarly armed had an enhancement added for carrying a deadly weapon, an enhancement that increases the potential sentence to 10 years. Minuta was not similarly charged (meaning, too, that the Oath Keepers who conspired with him were not charged with abetting his armed entry to the Capitol).

Finally, all the other conspirators, including Thomas Caldwell (who never entered the Capitol and was on the other side of it from where The Stack entered) were charged with abetting the destruction of the Capitol door through which The Stack entered. This is the charge that counts as a crime of violence for detention purposes, and also can merit (and is being treated as meriting, for the Proud Boy conspiracy cases) a terrorism enhancement. But neither Minuta nor James were charged with it, even though the indictment notes they entered the same door that The Stack went through.

At 3:15 p.m., inside the Capitol building, MINUTA and JAMES, together with others known and unknown, forcibly entered the Capitol building through the same east side Rotunda doors through which members of the stack had entered about 25 minutes earlier.

It’s unclear why DOJ wouldn’t treat Minuta and James the same way they treated Caldwell (and Kenneth Harrelson, who went in with The Stack but not part of it). I can think of several possible explanations. But they didn’t, which is notable (particularly in the wake of the DC Circuit decision that led to the release of Zip Tie Guy Eric Munchel and his mother).

One other, potentially related detail: The complaint that Minuta was charged with — which was obtained on February 24 but not executed until weeks later, seemingly in conjunction with the Joshua James arrest — is titled, “Affidavit in Support of Complaint Minuta (non conspiracy) 2021 02 23,” almost as if at that point DOJ wasn’t sure whether they were going to treat him separately from the rest of the Oath Keepers or not. They appear to have decided to do so, and along the way, thereby limit his potential criminal exposure.

Who is Person Ten and what role did he play with Stewart Rhodes?

At least as interestingly, the S3 indictment added a Person Ten. Minuta had been Person Five in the James complaint, it’s not clear who Person Four is, and Persons Six, Seven, Eight, and Nine are not described at all, but — along with Person Ten — are likely some of the people in this picture.

Curiously, the S3 indictment leaves out some key communications, especially those from a leadership Signal chat that showed up in earlier filings. Between a Caldwell detention motion, a Watkins detention motion, James’ complaint, and the superseding indictment, this partial list of known Oath Keepers communications suggest that Person Ten might be the person coordinating deployments that day. Consider two details from the partial list of the known communications among Oath Keepers below (I’ll update this later, once I catch up on the week of filings).

Highlighted in yellow, Person Ten has a series of calls back and forth with Joshua James, pre-Golf Cart Grand Theft. Right in the middle of it all, someone — not described in this indictment — informs the Signal group as a whole that “the[y] have taken ground” and “we need to regroup any members who are not on mission.” Shortly thereafter, James and Minuta launch the Grand Theft Golf Cart to get to the Capitol, where Minuta taunts the police, preventing them from moving to reinforce the overrun Capitol on the other side, and the members of The Stack leave Trump’s speech prematurely and go to the Capitol. That is, Person Ten calls for reinforcements (Rhodes repeats his Signal text), and then Minuta and James in the golf carts and The Stack converge on the northeast side of the Capitol to breach a new entry point.

Now consider the pink highlight: Unless the government or I have made a mistake in the timing, Person Ten and Kelly Meggs are both on the phone with Stewart Rhodes together. Because of the length of Person Ten’s calls, it overlaps entirely with Rhodes’ call with Meggs (which — again, unless there’s an error of timing — means Rhodes either has two phones or either via conferencing or a hold, had both on the same phone at the same time).

In either case, Person Ten seems to have a key role as a communication pivot between different groups of Oath Keepers. 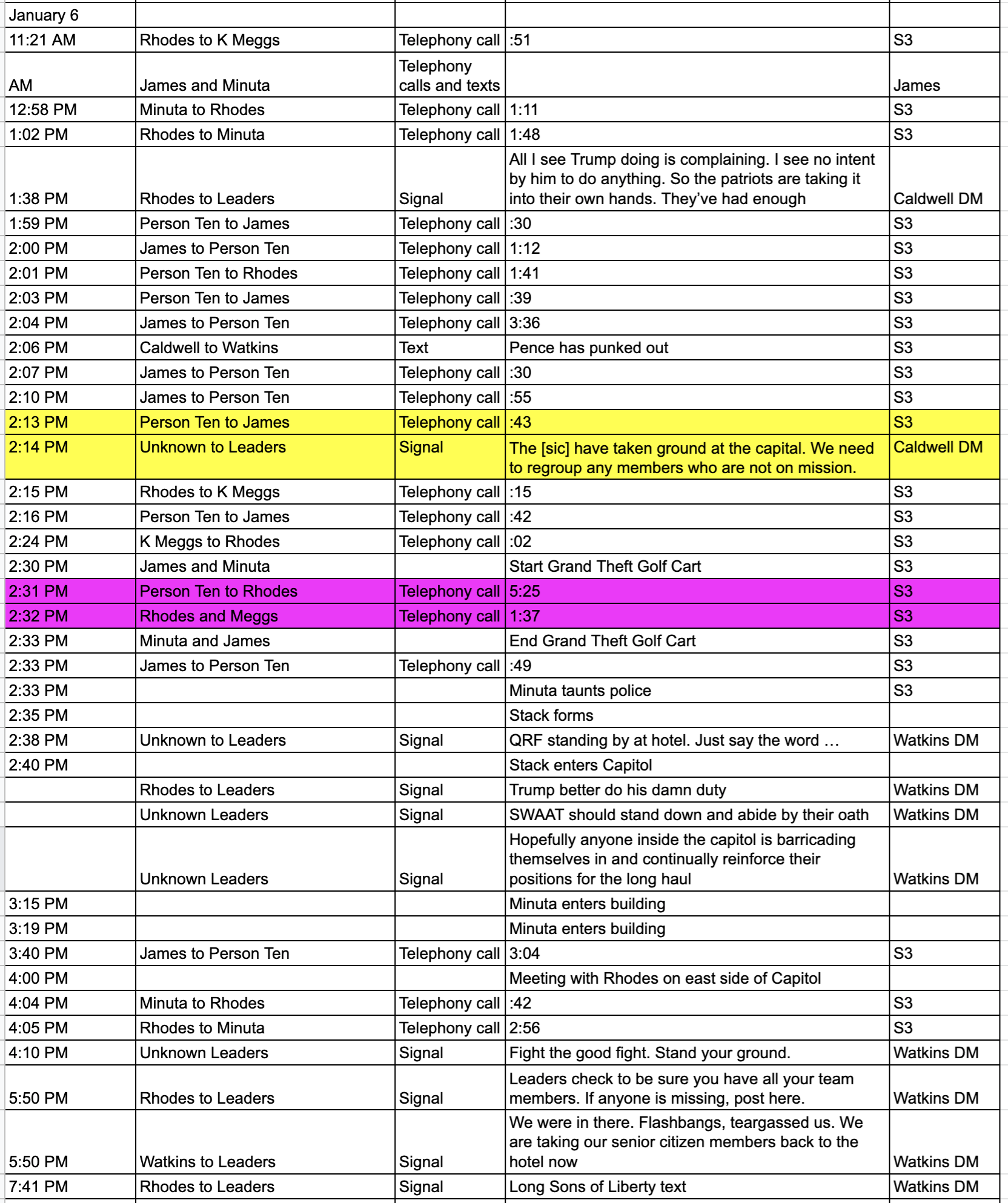 The communications not included

Finally, consider this: I have not included all known texts in the table above (most obviously missing are Watkins’ Zello texts). But after suggesting strong ties between James and Minuta, the government has included none of their multiple communications, neither on January 6 nor before that, in the superseding indictment. Similarly, the government has left out the Signal chats showing minute to minute deployments as the Oath Keepers launched a second front on the Capitol.

All these communications are tantalizing and hint at a good deal more coordination during the insurrection. And remember: Both Minuta and James were with Roger Stone for part of the day (earlier in the day, I think). But the government is still including just a fraction of the communications it knows about.

Update: Correct that the indictment said Minuta and James rode in the golf carts, didn’t drive and that the Meggses stayed at a different Hilton Garden than Rhodes and Minuta and Person Ten. Thanks to BB.

Update: I want to make clear that the reasons why DOJ backed off charges with Minuta may not all stem from the same reason, nor does this necessarily indicate he is cooperating. For example, in the wake of the DC Circuit decision in Munchel, the chances that DOJ could get pre-trial detention for either Minuta or James, are much lower. So charging them with abetting the damage doesn’t serve an investigative purpose at this time. And it’s possible after they seized Minuta’s phone, they discovered something to indicate he had deleted Facebook in response to Facebook’s decision to shut down Trump on the platform. To be honest, Minuta and James are an odd fit for this conspiracy as currently laid out, which suggests it’s likely to change in the near future.