On January 7, Patrick Montgomery’s associates started turning him in to authorities. One person forwarded a picture showing him in the Senate chamber and warned him he had saved the picture and would be forwarding it to authorities. 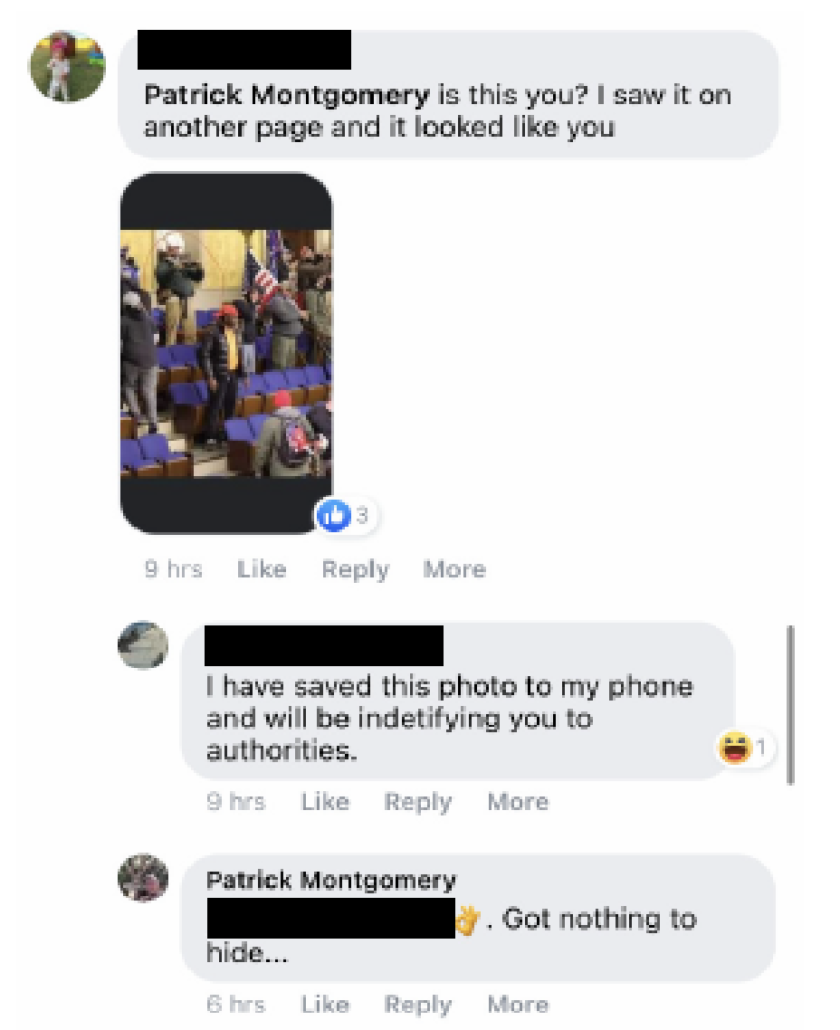 Another associate saw the same picture and IDed Montgomery to the FBI. The associate later shared this email exchange with the FBI.

Tipster: You have been reported to the police in DC as well as the FBI

Mongtomery: I’m not a scared cat or running from anything. . . . Im [sic] so deeply covered by the best Federal Defense lawyers in the country in case you chicken shit cry boys don’t want it takes to defend our freedom from these corrupt politicians.

Montgomery: I didn’t storm the castle violently. My group was let in peacefully by the police we were talking to with respect. We came a[n]d left peacefully before the anarchist and Antifa showed up breaking shit and being hoodlums.

The same day all his associates starting sharing those boasts, Montgomery deleted his Facebook and Instagram accounts.

It was too late.

Montgomery was arrested on January 17. Four days later, Montgomery was charged with trespassing via Information. And after both sides agreed to a delay on February 5, nothing more seemed to happen.

All the while, though, the FBI continued to investigate based off the pictures Montgomery had posted to Facebook hours after the insurrection, including this one showing him with two other men at the Capitol. 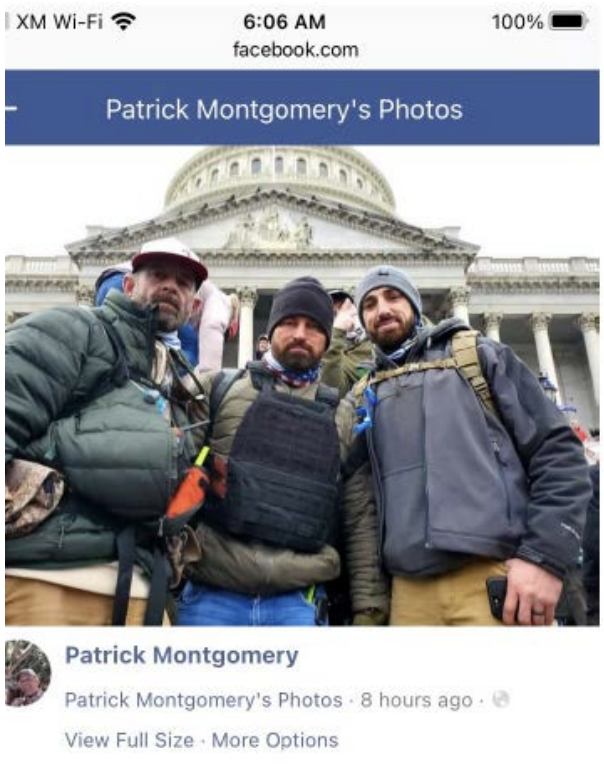 On March 16, the FBI interviewed someone in the middle of a protracted lawsuit with the middle guy in the picture, a guy named Brady Knowlton. That person IDed Knowlton, Montgomery, and also the guy on the left (though the FBI isn’t telling us his identity, for now).

In the interim, the FBI had obtained CCTV video footage of Knowlton, Montgomery, and yet another guy, entering the Capitol via the Upper West Terrace door at 2:35PM on January 6. 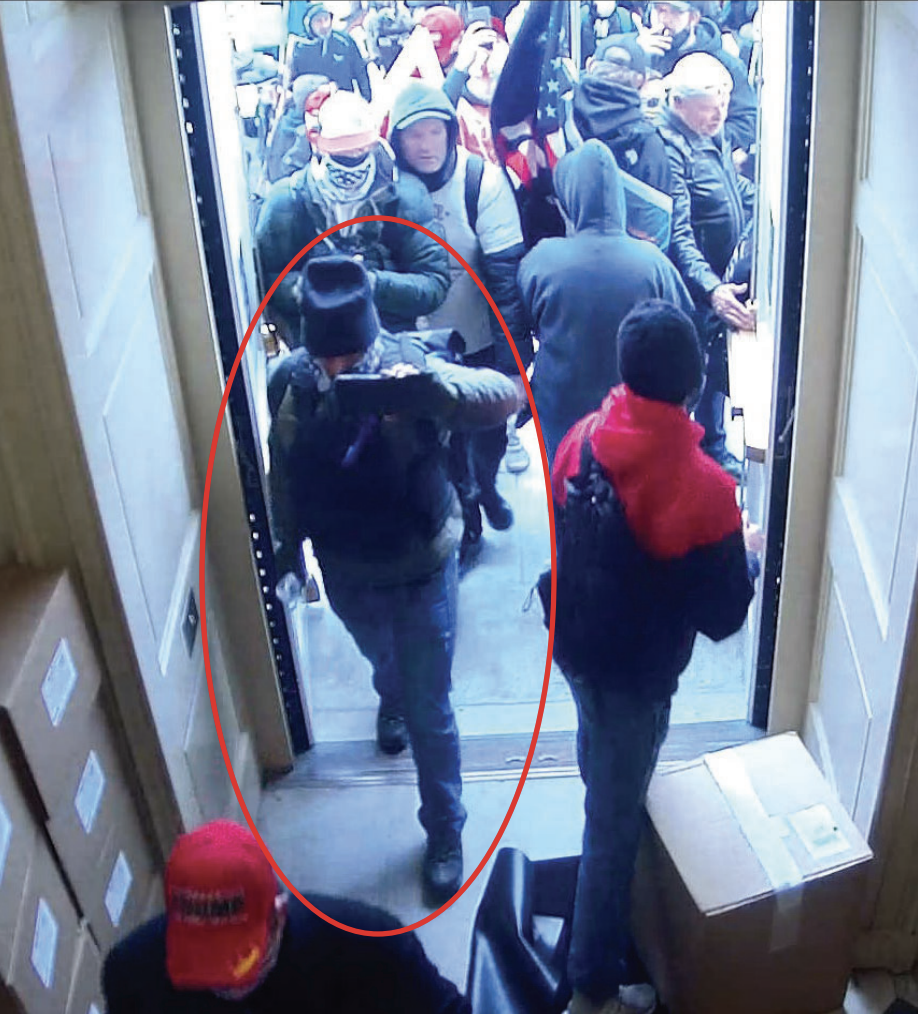 At 2:36PM, CCTV caught the three of them in the Rotunda. 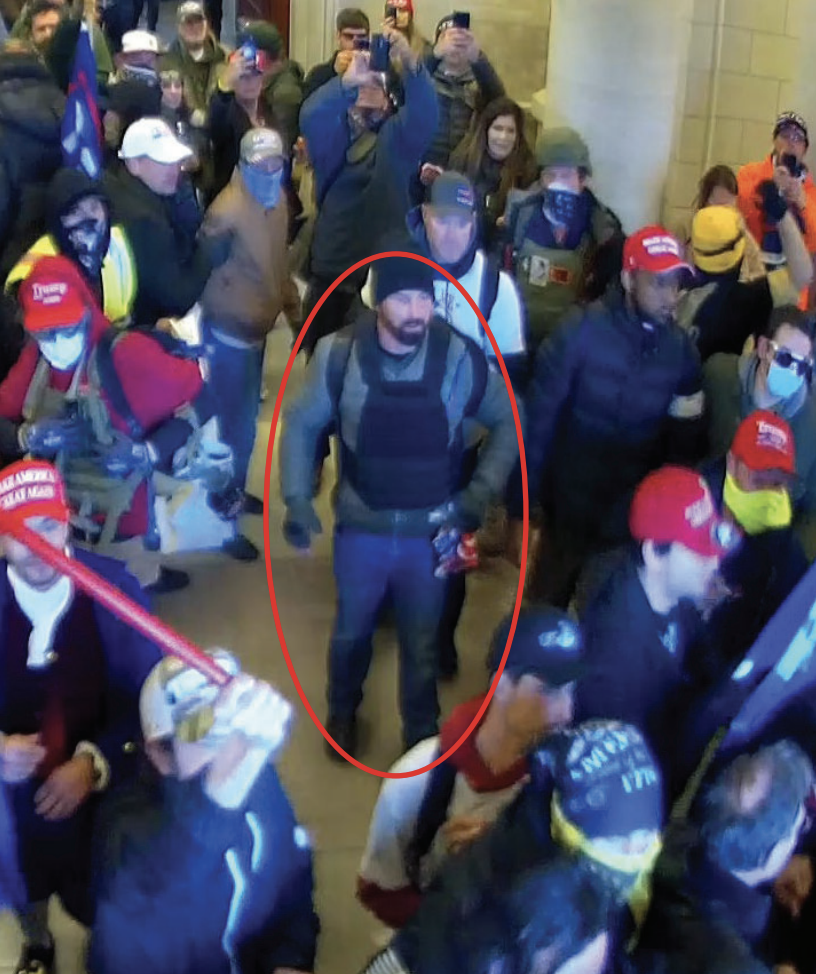 By 2:45PM — ten minutes after entering the Capitol — CCTV caught the three of them in the Senate Gallery. 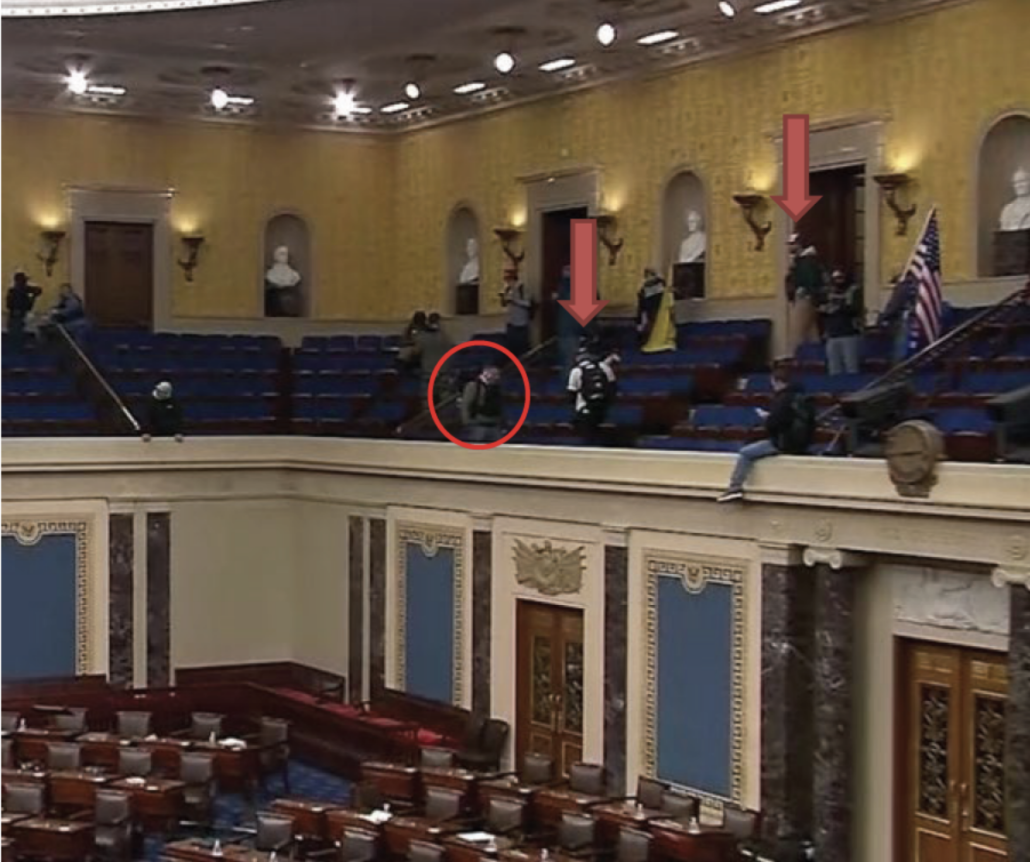 The FBI packaged all that up in an arrest warrant for Knowlton’s arrest — on trespassing and also an obstruction charge, for interrupting the vote count — approved on April 1.

Only after FBI had obtained the warrant for one of Montgomery’s close buddies did they finalize a protective order with him so they could start sharing the evidence that implicated not just him, but also at least one of his buddies. Montgomery signed a protective order on April 5. Knowlton was arrested on April 7. Knowlton’s [three!] attorneys spent much of last week asking the government to present what it believed was exculpatory evidence showing that cops let them walk in to the Capitol the grand jury.

Our Motion alleges that video recordings in the Government’s possession show that some Capitol Police officers and/or other law enforcement agents moved metal barricades aside to allow citizens to move toward the Capitol and welcomed citizens to enter the Capitol Building. Such conduct by the officers and their acquiescence to entry was an implicit authorization to exercise a protected right on January 6, not merely to engage in conduct which is neither protected nor forbidden by the law.

Our Motion asks this Court to direct Government counsel to search the inventory of videos and other evidence and produce for Mr. Knowlton and for the grand jury evidence of acquiescence and invitation by Capitol Police and/or other law enforcement agents to enter into the building, particularly if Mr. Knowlton can be identified as being among those who entered under such circumstances, and simply inform the grand jury that this request has been made and that they are permitted to consider that information before passing their judgment. If he did enter under such circumstances, he was exercising a right for which he may not be constitutionally punished. And such evidence is not merely exculpatory, it proves total innocence.

Instead, the government obtained an indictment against Montgomery and Knowlton. Not only did the government add obstruction charges to Montgomery, but they also described Montgomery forcibly assaulting or resisting an MPD officer.

And all that’s before you consider the two other guys included in pictures of them from the day.

I’ve got a hunch that we’re going to be hearing more about these fellows. Far more.

I’ve got a similar hunch that the story of what happened in the Senate chamber is going to get far more interesting in coming days.

Update: Let me clarify my title. For over a month, there has been a lot of reporting about imminent plea deals for all the people who, like Montgomery, were “just” MAGA tourists. And that’s what Montgomery seemed to be in all our tracking lists since then.

When the Knowlton arrest was rolled out, it became clear that Montgomery had some accomplices (but at least one and probably two remain unidentified). It also became clear — though DOJ has not presented what evidence they have of it — that both were deliberately trying to delay the vote count. That’s not surprising by itself — with maybe one exception, everyone who made their way to the Senate Chamber got charged with obstruction. But the indictment against the two makes it clear that Montgomery also engaged in some kind of violent resistance to cops.

There are a number of reasons I think there’s more to this. But one of those is the way they treated the investigation of Knowlton (including finding someone he was in a multi-year lawsuit with to ID him, which is harsh), and the way they used his charging to add the assault charge to the Montgomery indictment.