When No Means Yes: The Flynn and McFarland Response to Information to Paul Manafort

Jason Leopold liberated a bunch of the A1 back-up files (meaning the documents about which witnesses get asked) to Mueller 302s last night.

In virtually every way — from Mike Flynn bragging about sitting with Putin at the RT gala, to Erik Prince pretending not to remember obvious references to Russia in dealings with George Nader, to the response to George Papadopoulos’ offer to set up a meeting with Russia — the files make Trump’s flunkies look worse than was already known.

I want to show one specific example of how that’s true.

The Mueller Report told the story of how, after a secret meeting in Madrid with Oleg Deripaska deputy Georgiy Oganov where the two discussed “recreating old friendship” that Manafort had with Deripaska, Manafort returned and reached out to incoming Deputy National Security Advisor KT McFarland.

He would have told her, among other things, to undermine the Russian investigation by pointing to problems with the Steele dossier that Deripaska had been feeding both sides of.

As the Mueller Report tells it, McFarland asked if she should respond to Manafort, Flynn advised her not to, and she did not.

On January 15, 2017, three days after his return from Madrid, Manafort emailed K.T. McFarland, who was at that time designated to be Deputy National Security Advisor and was formally appointed to that position on January 20, 2017.945 Manafort’s January 15 email to McFarland stated: “I have some important information I want to share that I picked up on my travels over the last month.”946 Manafort told the Office that the email referred to an issue regarding Cuba, not Russia or Ukraine, and Manafort had traveled to Cuba in the past month.947 Either way, McFarland- who was advised by Flynn not to respond to the Manafort inquiry appears not to have responded to Manafort. 948

The Senate Intelligence Report tells it slightly differently. It describes that Flynn told her they shouldn’t respond until they were “in the hot seats.”

(U) Manafort returned to the United States from Madrid on January 12, 2017.615 Three days later, Manafort sent an email to K.T. McFarland, who at the time was designated to become the number two official in Trump’s National Security Council and was serving as Flynn’s deputy on the Transition.616 In the email, Manafort asked McFarland if she was in Washington D.C. that week and, if so, if she was willing to meet informally.617 Manafort said he had “some important· information I want to share that I picked up on my travels over the last month.”618

(U) Before responding to Manafort, McFarland forwarded Manafort’s request to Flynn and inquired whether she should. agree to meet with Manafort.619 Flynn responded by recommending that McFarland not meet with Manafort “until we’re in the hot seats,” presumably a reference to their taking official roles in the U.S. Government. 620 It is unclear what Manafort hoped to speak with McFarland about, but he claimed to the SCO it involved matters related to Cuba, not Russia or Ukraine.621

That is, rather than telling McFarland not to take the meeting, Flynn told her to hold off until Trump was inaugurated.

The email itself provides more details.

First, Manafort was specifically suggesting they only meet if she was in DC. 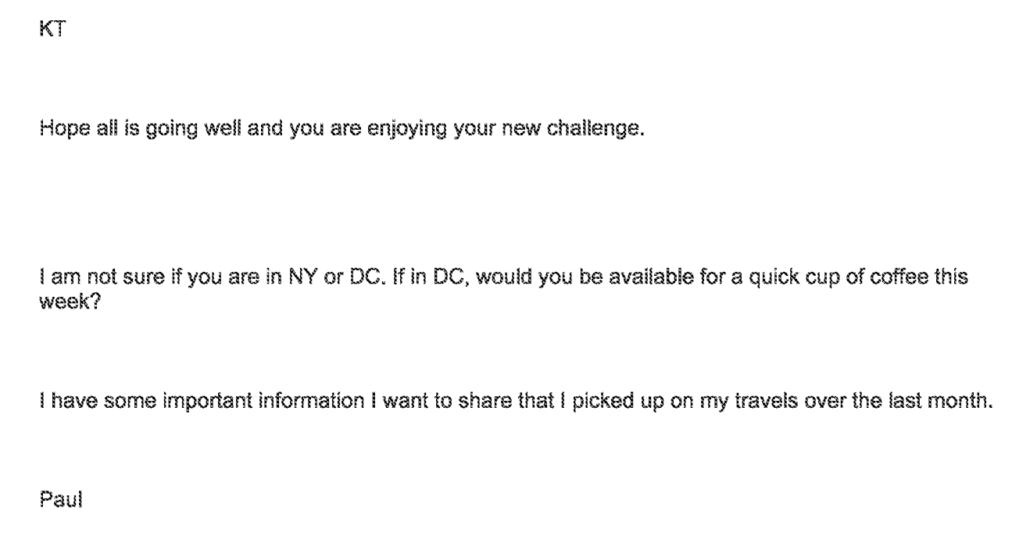 That is, Manafort wanted to meet in person. He didn’t want to tell her his “important information” if they were in different cities.

And Flynn was not only aware that Manafort might be “working for” someone, but he was specifically concerned about the perception of meeting with Manafort, “especially now.” 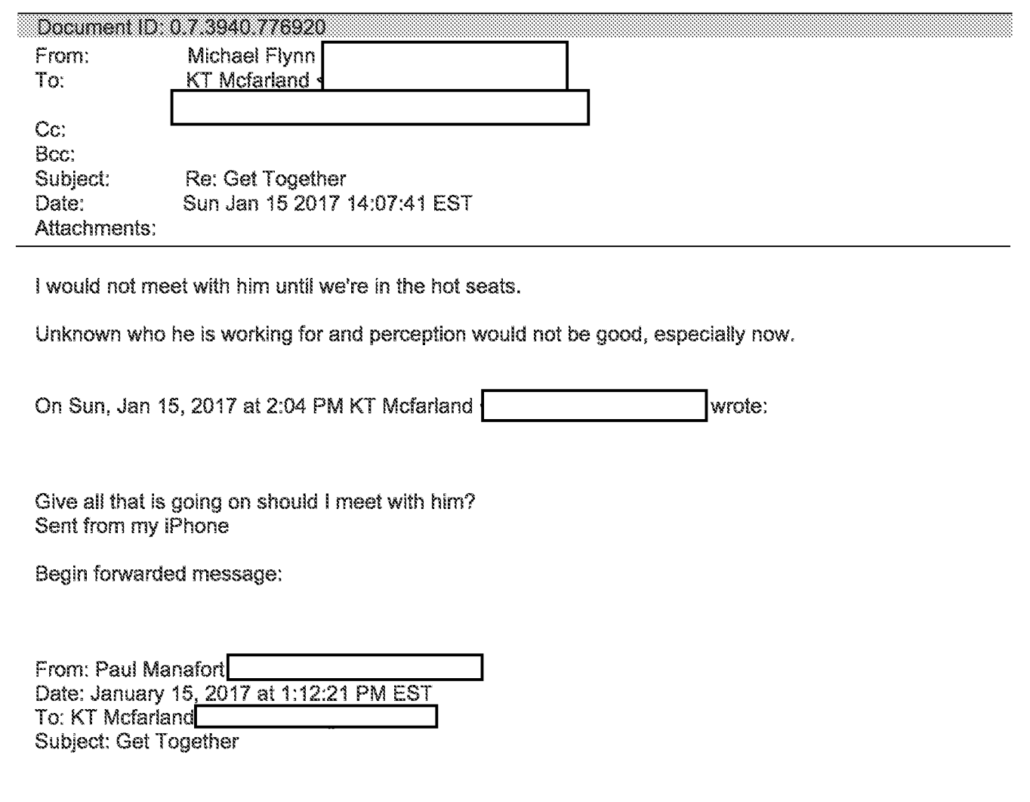 Unmentioned in this exchange, but important background, is that the press was already focused on Flynn’s secret phone calls with Russia, and he had already committed himself to several public lies about when he spoke with Sergey Kislyak and when.

And curiously, even though it took less than an hour for McFarland to forward this to Flynn and him to respond, the government does not, apparently, have any response McFarland sent to Manafort.

That doesn’t mean McFarland was implicated in Manafort’s coziness with Russian intelligence. But it does demonstrate how Mueller put the email in a remarkably favorable light.