Shortly after Mike Flynn pled guilty to lying to the FBI, a friendly leak to ABC reported that Flynn felt abandoned by Trump and promised “full cooperation” with Mueller that seems quaint in retrospect. The report also detailed that Trump had ordered Flynn to reach out to Russia on Syria.

Retired Lt. Gen Michael Flynn has promised “full cooperation” in the special counsel’s Russia investigation and, according to a confidant, is prepared to testify that Donald Trump directed him to make contact with the Russians, initially as a way to work together to fight ISIS in Syria.

The stunning turn comes as Flynn pleaded guilty to one count of lying to the FBI about his back-channel negotiations with the Russian ambassador – talks that occurred before Trump took office. The special counsel made the plea agreement public Friday morning.

The confidant provided ABC News with new details on Friday about Trump’s instructions to Flynn. During the campaign, Trump asked Flynn to be one of a small group of close advisors charged with improving relations in Russia and other hot spots. The source said Trump phoned Flynn shortly after the election to explicitly ask him to “serve as point person on Russia,” and to reach out personally to Russian officials to develop strategies to jointly combat ISIS.

At first, this friendly leak suggested Trump had ordered Flynn to reach out to Russia during the election, but the story was quickly corrected to say the order came after the election.

In any case, the leak seemed to be a message to others about what Flynn had been asked and would be asked.

Now that most of Flynn’s 302s have been released, it’s not entirely clear what he was talking about, if he was trying to leak the content of his interviews. In his interviews to that date, he described the meeting with Sergey Kislyak where Jared Kushner asked to set up a back channel so they could discuss Syria (in an interview where Flynn otherwise claimed not to remember a lot, he did remember that Kushner, Don Jr, and Ivanka all had a tie to this meeting). Entire swaths of his November 21, 2017 interview remain redacted, but the b4 (trade secret) redaction may suggest this was about his consulting. There’s a long b7A redaction, reflecting an investigation that was still ongoing in January, in his November 29, 2017 interview that might be that reference. There are descriptions of Putin’s congratulatory call immediately after the election, which has one sentence redacted, which might be related.

But there are no unredacted descriptions of Trump ordering Flynn to work with Russia on Syria — either after or before the election — from his early Mueller interviews.

The recent liberation of the backup files from his interviews, however, reveal that he was receiving emails about meeting with Russians well before the election. And it appears that then Fox News commentator Paul Vallely was involved in some way.

On April 25, 2018, Flynn was asked about an email he received from a retired Major General on June 29, 2016 at 7:27PM, which explained that he needed to talk to Flynn about “the Russia initiatives in Syria and Turkey.” 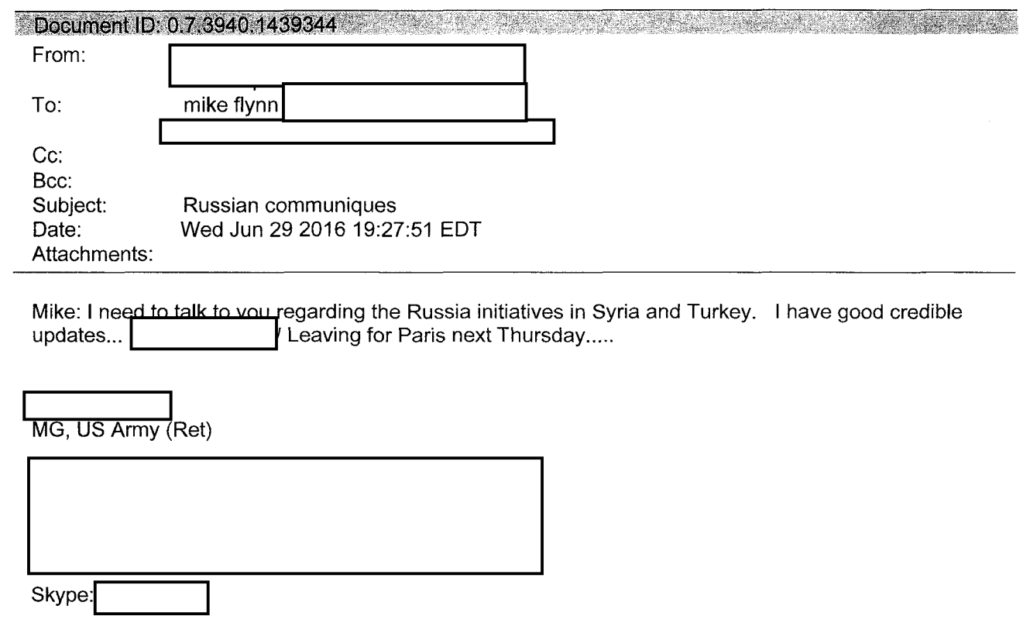 Flynn explained that the sender (whose name may be 7 characters long) “is a retired officer who was very active in Europe matters.” The person was “very pro-Russia.” The retired General “had very strong views on finding ways for the U.S. to work with Russia.”

Then, on May 1, 2018, Flynn was asked about what appears to be a response to the original email from the same retired General three minutes later. “We need to somehow meet with [redacted] in DC or [redacted]. They are receptive to this….. 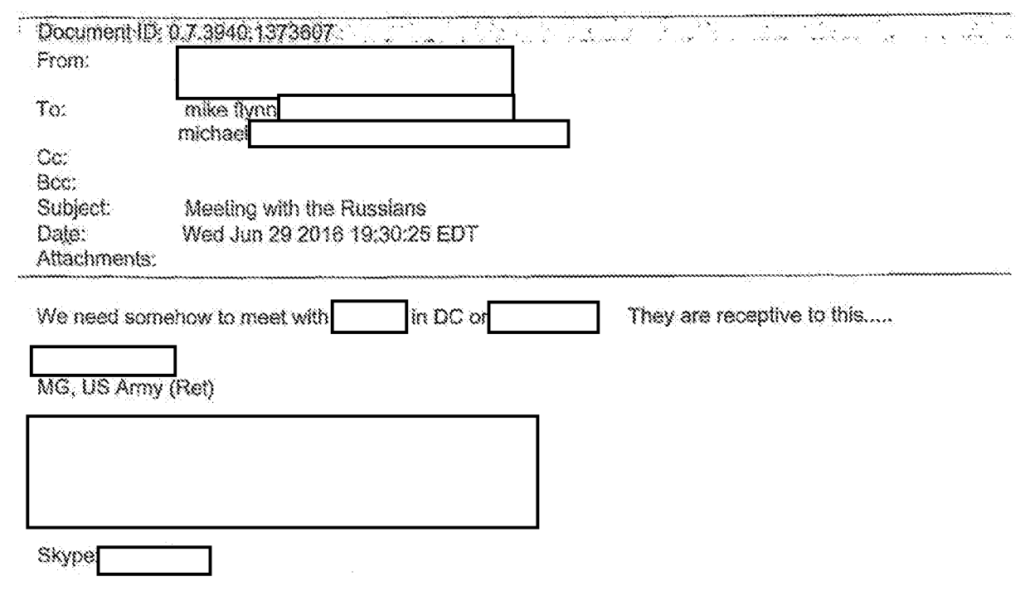 This iteration of the email reveals that “michael” also received the email (which could be a second Flynn email, his son Mike Jr, Michael Ledeen, or someone else entirely). Flynn explained that he didn’t know much about the two individuals the General wanted to meet, but he did say he was very respectful to the General.

Then, what appears to be the same General sent an email on September 10, 2016 to undisclosed recipients, BCCing someone (who, by dint of his copy noting the BCC, is likely Flynn), attaching a report from Retired General Paul Vallely. 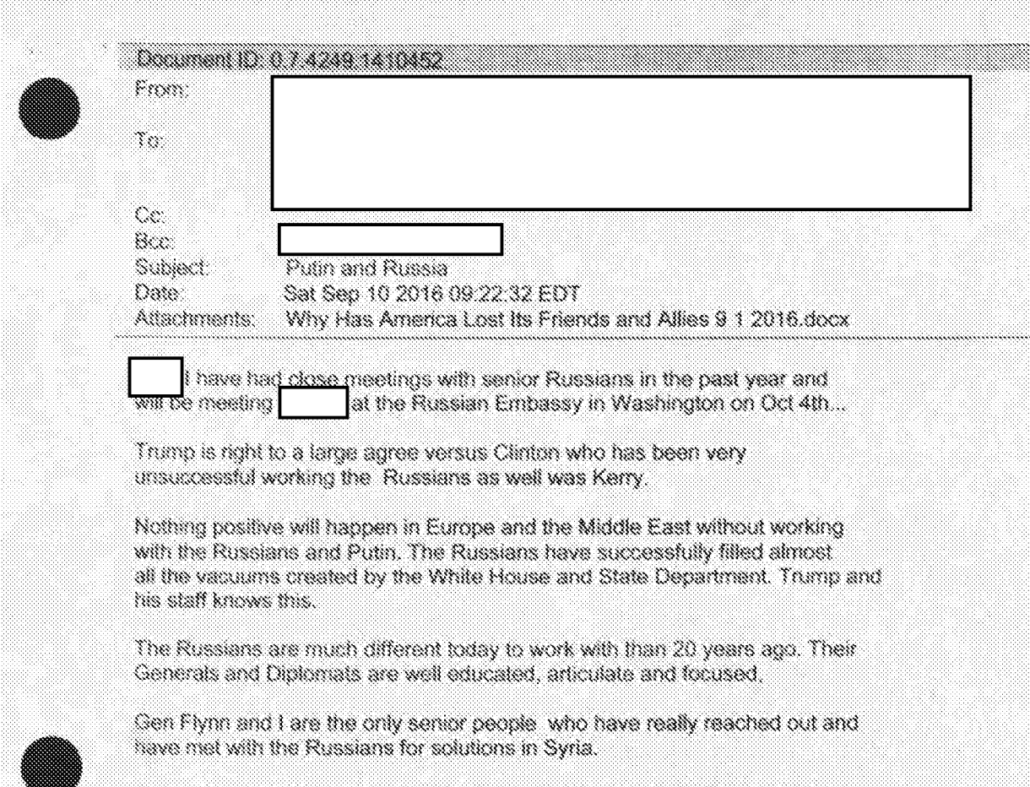 The email introducing the report explains that the sender has had “close meetings with senior Russians in the past year and will be meeting” with someone else whose name is redacted “at the Russian Embassy in Washington on Oct 4th…” It states that, “Gen Flynn and I are the only senior people who have really reached out and have met with the Russians for solutions in Syria.” The General who sent the email went on to explain that “Trump is pressing the point” because “it is time to work with Russia much closer for solutions.”

The email also claims that “Putin has much more international respect and support than our President.” The report itself rants at length about Obama, claiming that he was “reducing our country to new lows and jeopardizing our very survival as a nation.”

It’s not certain that Vallely was the guy who sent the Vallely article to Flynn, but it’s a very good bet.

In addition to being a birther and having called for an uprising against Obama years before 2016, Vallely has predictably embraced QAnon. Vallely also signed a very recent letter similarly invoking apocalypse under a Democratic President.

By length of name (the redaction appears longer than 7 characters), I don’t think Vallely is the retired General and Fox contributor referenced in that same interview, one who introduced Flynn to another person who thought he had access to secret emails. Unlike the respect that Flynn had for the General addressing Russia, Flynn seemed more skeptical of this General and his associate, calling the General’s writings “conspiratorial” and the associate’s theories “a lot of B.S.”

Still, the pro-Russian General was representing to others that he and Flynn had reached out to Russians, and on precisely the Russia-Turkey-Syria nexus that Flynn would continue pursuing as he prepared to take over as National Security Advisor.

Update: Laura Rozen alerted me to this February 2017 Paul Vallely piece on Syria for the Valdai Discussion Group, which already features in the 2016 operation in Joseph Mifsud’s background.