The New York Times’ Barry Meier is the latest person to become part of the disinformation project associated with the Steele dossier, while claiming to critique it.

Before I explain why, let me lay out some very basic facts about the Steele dossier about which anyone deigning to comment on it at this point should be expected to exhibit basic awareness.

It is a fact that, starting in 2014 and continuing at least through at least February 2017, Christopher Steele used his relationship with DOJ’s Organized Crime expert, Bruce Ohr, to encourage ties between Oleg Deripaska and the US government. That included brokering a meeting between Ohr and Deripaska in 2015, and several communications in 2016 before Fusion GPS hired Christopher Steele to investigate Trump. It included Steele’s meeting with Ohr on July 30, 2016, at which Steele provided Ohr information on Russian doping, details from his reporting for the DNC, and news about Deripaska’s lawsuit against Paul Manafort. On December 7, 2016 — the day before Deripaska associate Konstantin Kilimnik would renew his pitch to Paul Manafort on a plan to carve up Ukraine — Ohr even suggested that Deripaska would be a useful source to reveal Manafort and Trump’s corruption. Just as Steele was working with the DNC via an attorney client, Steele was working with Deripaska via one or more attorney client. Like Manafort, Steele was under financial pressure in this period, and so was eager to keep Deripaska’s attorneys as a client. This post and this post provide a summary of their exchanges over that year.

It is a fact that Steele’s primary subsource, Igor Danchenko, described that in March 2016, Steele tasked Danchenko to find out what he could learn about Paul Manafort’s corruption and his ties to Ukraine (though Danchenko had little success). When asked about the client for this work, Danchenko, “had no inclinations as to why, or for whom, Steele was asking about Manafort.”

It is a fact that the DOJ Inspector General Report on Carter Page provided evidence to suggest an associate of Oleg Deripaska — and so we should assume Oleg Deripaska himself — learned of Steele’s dossier on Donald Trump by early July 2016, which would have been after just the first report had been completed.

210 As we discuss in Chapter Six, members of the Crossfire Hurricane team were unaware of Steele’s connections to Russian Oligarch 1. [redacted]

211 Sensitive source reporting from June 2017 indicated that a [person affiliated] to Russian Oligarch 1 was [possibly aware] of Steele’s election investigation as of early July 2016.

This means that Deripaska’s associate probably learned of the dossier project before Steele met with Ohr on July 30 to share — along with information on Russian doping — information about Deripaska’s lawsuit against Manafort and the first tidbits from Steele’s dossier reporting.

342 In late January 2017, a member of the Crossfire Hurricane team received information [redacted] that RIS [may have targeted Orbis; redacted] and research all publicly available information about it. [redacted] However, an early June 2017 USIC report indicated that two persons affiliated with RIS were aware of Steele’s election investigation in early [sic] 2016. The Supervisory Intel Analyst told us he was aware of these reports, but that he had no information as of June 2017 that Steele’s election reporting source network had been penetrated or compromised.

It is also a fact that Natalia Veselnitskaya, who because she was also a Fusion GPS client, was by far the most likely person to learn of a project conducted by Fusion GPS (possibly through Ed Baumgartner, who was working both the Fusion project with Veselnitskaya and the one with the DNC), also has ties to Russian intelligence.

It is a fact that when DOJ’s Inspector General entertained with the Crossfire Hurricane team the possibility that the Steele dossier had been injected with disinformation, DOJ IG envisioned Oleg Deripaska running that effort.

Priestap told us that the FBI “didn’t have any indication whatsoever” by May 2017 that the Russians were running a disinformation campaign through the Steele election reporting. Priestap explained, however, that if the Russians, in fact, were attempting to funnel disinformation through Steele to the FBI using Russian Oligarch 1, he did not understand the goal. Priestap told us that

what he has tried to explain to anybody who will listen is if that’s the theory [that Russian Oligarch 1 ran a disinformation campaign through [Steele] to the FBI], then I’m struggling with what the goal was. So, because, obviously, what [Steele] reported was not helpful, you could argue, to then [candidate] Trump. And if you guys recall, nobody thought then candidate Trump was going to win the election. Why the Russians, and [Russian Oligarch 1] is supposed to be close, very close to the Kremlin, why the Russians would try to denigrate an opponent that the intel community later said they were in favor of who didn’t really have a chance at winning, I’m struggling, with, when you know the Russians, and this I know from my Intelligence Community work: they favored Trump, they’re trying to denigrate Clinton, and they wanted to sow chaos. I don’t know why you’d run a disinformation campaign to denigrate Trump on the side. [brackets original]

I have laid out the evidence that Oleg Deripaska was playing both sides in 2016, taking steps to make Manafort more vulnerable legally and financially even as his deputy Kilimnik was using Manafort’s vulnerability to swap campaign information for a plan to carve up Ukraine and financial salvation. The same post shows how every single report in the dossier could serve key Russian purposes, both associated with the 2016 operation and more generally (though I’m not arguing the entire dossier was disinformation). If the dossier was disinformation, it would taint a great number of anti-Russian experts, from Steele to the FBI to others in the US government.

If you’re going to write about the Steele dossier at all in 2021, you should exhibit some familiarity with these facts. All the more so if you’re going to talk about whether it was disinformation.

But NYT’s Barry Meier doesn’t do that. Last week, Meier published an excerpt from his book on private intelligence services. The entire excerpt uses the Steele dossier as the exemplar of what can go wrong when private intelligence services sell information collection to clients and also share that information with journalists. I don’t disagree that the dossier was a shit-show, but then I’ve been warning about that for four years now.

As part of Meier’s proof of the shoddy product in the dossier, Meier astoundingly quotes Natalia Veselnitskaya, without clearly explaining that when he says Veselnitskaya “worked alongside” Glenn Simpson, he meant she thought highly enough of his services to employ him.

Over dinner in Moscow in 2019, Natalia Veselnitskaya, a Russian lawyer who met with Donald Trump Jr. at Trump Tower during the 2016 campaign, offered her take on the matter. Ms. Veselnitskaya had worked alongside Mr. Simpson when she represented a Russian-owned real estate firm called Prevezon Holdings and said she regarded him as a skilled investigator. As for Mr. Steele and the dossier, she had nothing but contempt.

“If you take this fake stuff for real, then you just have to be brave enough to believe, to completely dismiss all your special services, all your intelligence staff,” she said rapidly through an interpreter. She suggested how odd it was that all those people and agencies “were never able to find out what that talented person found out without ever leaving his room.”

Ms. Veselnitskaya was embroiled in her own legal drama. The Justice Department had indicted her in connection with her work for Prevezon, a charge she denied. Still, she raised an issue that reporters who embraced the dossier had blown past: How did Christopher Steele know more about Donald Trump and Russia than the C.I.A. or MI6?

One basic piece of evidence that the dossier had been compromised was that neither Simpson nor Steele ever figured out Veselnitskaya had floated a quid pro quo directly to Trump’s son — sanctions relief for dirt — with Manafort in attendance. But Meier apparently doesn’t think that Veselnitskaya was the proof that she said Steele missed. That is, he apparently doesn’t even understand — perhaps because he knows so little about what the Mueller investigation actually revealed? — that he’s being trolled by Veselnitskaya and that troll is offered up as proof that Christopher Steele is uniquely vulnerable to getting fooled by spooked up Russians.

That’s Meier’s one piece of primary evidence against the dossier. Otherwise, Meier explains, investigative journalists like himself rely on primary sources.

Meier relies on a series that Erik Wemple did, for which he says, “most journalists [Wemple] contacted either defended their work or ignored his inquiries.” Meier doesn’t mention that not only did I not ignore Wemple, but I told him (twice, I think, both for an early inquiry about Chuck Ross’ reporting on the dossier and for his later series) that to the extent the dossier was disinformation, Ross and Wemple had become part of that effort. That is, Meier may not know, but Wemple himself is guilty of what Meier accuses others of, ignoring inconvenient details that undermine his narrative.

Craziest still, Meier relies on the claims of Matt Taibbi, who has harbored outright conspiracy theories about 2016, and whose own “reporting” on the Russian investigation consistently relies on, and usually misrepresents, secondary sources rather than the primary texts.

In an article for Rolling Stone, Matt Taibbi cast the media’s handling of the dossier as a replay of a press disaster: the reporting before the Persian Gulf war, which claimed that Saddam Hussein had weapons of mass destruction. “The W.M.D. affair showed what happened when we don’t require sources to show us evidence, when we let political actors use the press to ‘confirm’ their own assertions,” Mr. Taibbi wrote. “Are we never going to own up to this one?”

On its own, Meier’s piece is a performance of the problems he complains about: relying on unreliable sources and apparent ignorance of the public record.

But it gets crazier still once you consider the response Glenn Simpson and Peter Fritsch posted to Meier’s work. Along with pointing to some inaccuracies in Meier’s attacks on them and some disclosures Meier should have made, they reveal that Fusion GPS played a bit part in the August 2016 NYT story on Manafort that led to his ouster from the Trump campaign.

By the time of the Democratic National Convention in July, we had been researching Trump for some 10 months — work that began for Republicans and was later continued for Democrats. On July 25, 2016, we met on the sidelines of the convention in Philadelphia with two ofthe Times’ top editors, Dean Baquet and Matt Purdy, to share information about our Trump-Russia research.

Among the topics we discussed was Paul Manafort’s prior work for Ukrainians backed by Putin. The next day, at Purdy’s request, we sent the Times a pile of public record documents that supported a conclusion that Manafort was in a compromised position in relation to Moscow, including records that showed he owed millions of dollars to Deripaska.

Purdy connected us with two of his top reporters. Barry Meier was also assigned to the story. He was having a hard time locating the Virginia court records we’d mentioned to Purdy and Baquet and reached out to Simpson and a colleague for help. 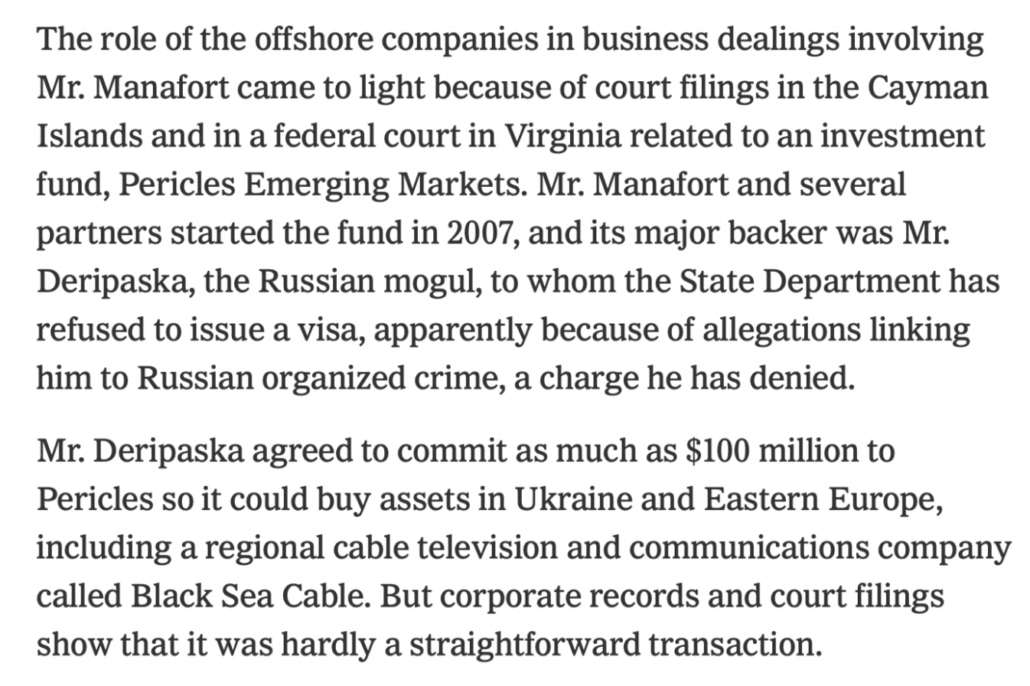 After that story, Meier even went back to Fusion for any information they had on Deripaska.

The most important takeaway from the dossier is the way it served as a tool in Oleg Deripaska’s two-sided game that turned Paul Manafort into an easy target. And it turns out that way back in 2016, Meier (and Fusion, in yet another undisclosed way) was part of this two-sided game.

Update: The partially sealed documents in Manafort’s docket are being released today. This Rick Gates 302 shows how closely the August 2 meeting tied Deripaska’s efforts to increase Manafort’s legal and financial woes — the lawsuit — with the delivery of detailed information about how to win the campaign. 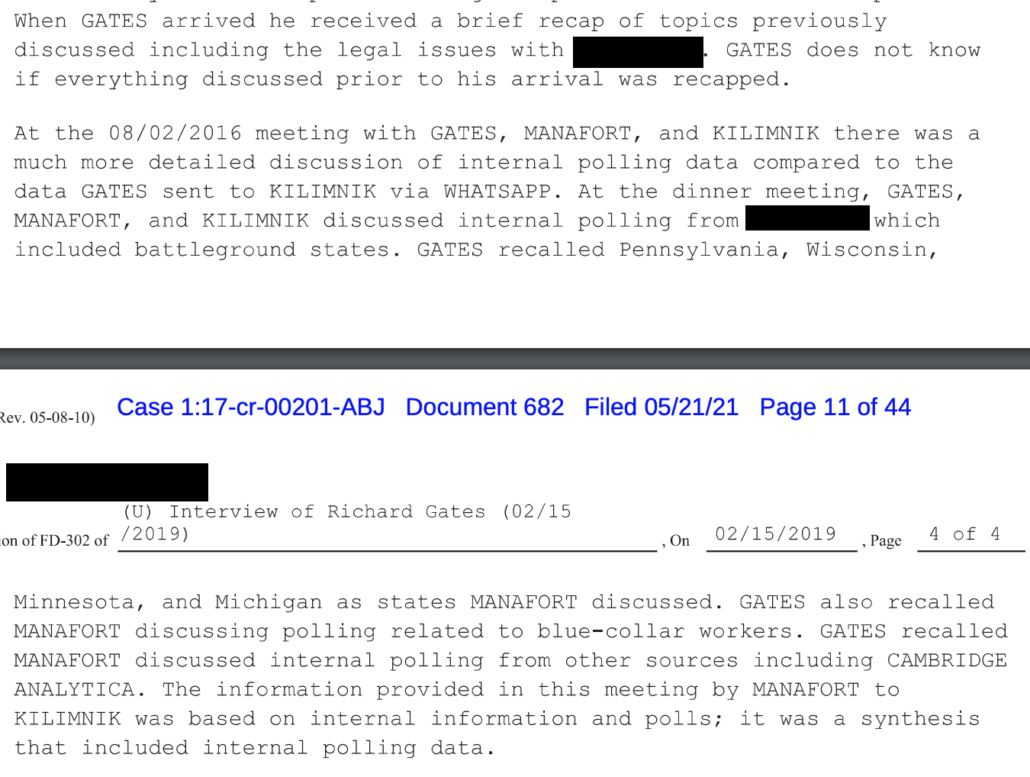