Yesterday, DOJ told Amy Berman Jackson that they will appeal her decision to release the entirety of a memo written to justify Billy Barr taking a “Heads Trump wins Tails democracy loses” approach to the decision on how to deal with the Mueller Report. There are several problems with their motion for a stay while they do that.

To understand the first problem, note the signature line of their motion for a stay. 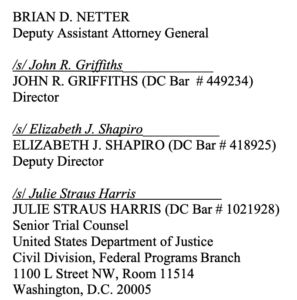 It is signed by — among others — Julie Straus Harris.

That’s a problem, possibly even an ethical one, because in addition to problems with the declarations submitted by Vanessa Brinkmann and Paul Colburn, ABJ had a specific problem with a brief submitted by Straus Harris (and approved by Elizabeth Shapiro, her boss). 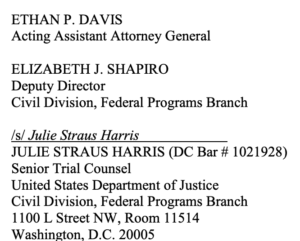 As ABJ noted in her opinion, Straus Harris added a “flourish” that was not supported by any of the underlying declarations.

And the in camera review of the document, which DOJ strongly resisted, see Def.’s Opp. to Pl.’s Cross Mot. [Dkt. # 19] (“Def.’s Opp.”) at 20–22 (“In Camera Review is Unwarranted and Unnecessary”), raises serious questions about how the Department of Justice could make this series of representations to a court in support of its 2020 motion for summary judgment:

[T]he March 2019 Memorandum (Document no. 15), which was released in part to Plaintiff is a pre-decisional, deliberative memorandum to the Attorney General from OLC AAG Engel and PADAG Edward O’Callaghan . . . . The document contains their candid analysis and advice provided to the Attorney General prior to his final decision on the issue addressed in the memorandum – whether the facts recited in Volume II of the Special Counsel’s Report would support initiating or declining the prosecution of the President . . . . It was provided to aid in the Attorney General’s decision-making processes as it relates to the findings of the Special Counsel’s investigation . . . . Moreover, because any determination as to whether the President committed an obstruction-of-justice offense was left to the purview of the Attorney General, the memorandum is clearly pre-decisional.

13 The flourish added in the government’s pleading that did not come from either declaration – “PADAG O’Callaghan had been directly involved in supervising the Special Counsel’s investigation and related prosecutorial decisions; as a result, in that capacity, his candid prosecutorial recommendations to the Attorney General were especially valuable.” Id. at 14 – seems especially unhelpful since there was no prosecutorial decision on the table.

In the motion for a stay, Julie Straus Harris says, sorry, “the briefs” — her briefs — “could have been clearer … but the government’s counsel” — meaning, Straus Harris — “did not intend to mislead the Court.”

On the merits, the Court’s decision was substantially premised on the view that the government’s briefs and declarations incorrectly described the nature of the decisional process in which the Attorney General was engaged. In retrospect, the government acknowledges that its briefs could have been clearer, and it deeply regrets the confusion that caused. But the government’s counsel and declarants did not intend to mislead the Court, and the government respectfully submits that imprecision in its characterization of the decisional process did not warrant the conclusion that Document no. 15 was unprotected by the deliberative process privilege.

The motion spends several pages explaining why the Brinkmann and Colburn declarations were not misleading. That section vaguely waves at “briefing” to address claimed inaccuracies in the briefs written by Straus Harris. The section mentions the offending brief once, but without even remotely addressing the brief itself.

The first Colborn Declaration likewise explained that Document no. 15 “was submitted to the Attorney General to assist him in determining whether the facts set forth in Volume II of Special Counsel Mueller’s report ‘would support initiating or declining the prosecution of the President for obstruction of justice under the Principles of Federal Prosecution.’” Colborn Decl. ¶ 17. That description quotes from the unredacted portion of the opening sentence of the memorandum and is accurate; it neither states nor necessarily implies that the authors were advising the Attorney General on whether the President should actually be prosecuted. See also Def.’s Mem. in Supp. of Mot. for Summ. J. (Def.’s Mem.) (ECF No. 15-2) 14 (quoting Colborn Decl.). [my emphasis]

But the section explaining that ABJ’s complaints, while understandable, are unfounded never addresses ABJ’s complaint about the Straus Harris “flourish,” which is a complaint of a different kind. Edward O’Callaghan is only mentioned as an author of this memo.

To be sure: Straus Harris didn’t simply invent O’Callaghan’s role or his import out of thin air. She’s not making stuff up. She’s right that her claim about O’Callaghan was not a lie, even if she never makes it explicitly. But in a legal and ethical sense, she made an assertion about which no one has asserted to the veracity or even explained. This memo assumes as given that OLC and a prosecutor’s supervisor can get together and write an OLC memo, something which was obviously problematic even before these memos started coming out. And that’s a problem because the reasons why DOJ didn’t want to explain O’Callaghan’s role in a declaration (indeed, could not) go to the core of the problems with the Barr Memo.

I’m sympathetic that Straus Harris got put on the front line to answer for Billy Barr’s wildly inappropriate efforts to give the President a clean bill of health. But she is now in a position where she’s submitting a brief about her own conduct, and that brief entirely ignores ABJ’s complaint about her conduct.

Had Paul Colburn included in his declarations an admission that DOJ had let O’Callaghan serve a hybrid role, ABJ wouldn’t have had the confusion that DOJ is now trying to explain away. But admitting that would have — and does — admit to far graver problems with the Barr Memo.