In [Legal] Defense of the Nazi

The biggest known investigative fuck-up in the January 6 investigation thus far was when the FBI raided the home of Marilyn and Paul Hueper believing that Marilyn was a woman that the FBI suspects, based off surveillance video, may have been part of stealing Nancy Pelosi’s laptop. The Hueper’s claims about their actions on January 6 don’t seem to be entirely forthright, but Marilyn has made a solid case that the FBI mistook her for the woman in question.

I think the FBI did have probable cause for that search, but I also think the FBI did not use available tools — most notably the Google and GeoFence warrants they’ve used in many other cases — that should have been able to exclude Marilyn as the suspect.

When the FBI arrested Hale-Cusanelli, he admitted in an interview that he gave hand and voice signals — which could be no more than waving people forward — to encourage others to “advance” past cops. But the government’s primary basis to keep him jailed, when they first succeeded in doing so back in January, seems to have been that, once you cut him off from the military network he worked in as a Navy contractor, he was bound to turn to war.

Releasing Defendant from custody will only reinforce his belief that his cause is just. Given his impending debarment from Naval Weapons Station Earle, and his potential Administrative Separation from the U.S. Army Reserve, Defendant’s release will likely leave him with nowhere to go and nothing to do except pursue his fantasy of participating in a civil war. If nothing else, the events of January 6, 2021, have exposed the size and determination of right-wing fringe groups in the United States, and their willingness to place themselves and others in danger to further their political ideology. Releasing Defendant to rejoin their fold and plan their next attack poses a potentially catastrophic risk of danger to the community.

When they made a more substantive (and successful) argument he should remain detained, they focused on two things: his choice of a third party guardian was also an extremist who had helped him try to game reporting from the Navy on his extremism, and his extremism itself, including that he groomed to look like Hitler.

They also argued that Hale-Cusanelli poses a threat to the informant who IDed him.

Hale-Cusanelli is appealing his detention. But both he and his attorney, Jonathan Zucker, are getting fed up. Last week, Zucker submitted a motion asking to be replaced, but also claiming that he has received nothing in discovery about what Hale-Cusanelli did at the Capitol.

The parties were last before the court on May 12, 2021. At that time the defense expressed concern to the court regarding the paucity of discovery in this case. To date the prosecution has disclosed the defendant’s custodial interview, a surreptitiously recorded conversation between the defendant and a cooperating witness who was wearing a recording device provided by law enforcement, two portions of text messages between the defendant and two other civilians. The prosecution has provided nothing else, particularly no evidence regarding what defendant did on January 6 either outside or inside the Capitol. Nor any other evidence regarding the defendant’s activity in relation to the charged offenses. 1

Yesterday, the government responded. AUSA Kathryn Fifield claimed that most of what Zucker had said was not accurate.

The bulk of Defendant’s representations to the Court regarding discovery—both in terms of what they have received and government’s response to their requests—are not accurate. To date, the government has provided the most substantial portions of the government’s evidence. That includes the CHS recordings in which Defendant makes substantial admissions regarding his criminal conduct on January 6, Defendant’s custodial interview in which Defendant makes substantial admissions regarding his criminal conduct on January 6, and a partial extraction of Defendant’s cellular phone. The partial extraction includes the extraction report and the native files, including chats, videos, and photos. Defense counsel has confirmed with the undersigned that they have access to these materials on USAfx. Further, the government separately provided Capitol CCTV video capturing Defendant inside the Capitol building on January 6 and reports of interviews conducted by NCIS. Defense counsel confirmed receipt of these materials with prior government counsel. Thus, Defendant is already in possession of the evidence most relevant to detention proceedings and to Defendant’s conduct on January 6, and has been in receipt of these materials since before the last status hearing on May 12, 2021.

She described how, because of the technical issues that occur every time the government shares large volume electronic files with defense attorneys, Zucker still doesn’t have the full content of Hale-Cusanelli’s phone.

Video recording of custodial interview of Defendant Hale-Cusanelli produced via USAfx on February 22, 2021.

Bulk report of interviews conducted by NCIS produced via email on March 7, 2021.

Report of interview conducted by NCIS of Sergeant John Getz produced via email on March 8, 2021.

Capitol Surveillance CCTV produced via USAfx in connection with another defendant represented by defense counsel on March 31, 2021. Upon information and belief, you confirmed receipt of this video with prior government counsel. Reproduced in the USAfx folder for this case on May 25, 2021. The Government has designated these files Highly Sensitive under the Protective Order issued in this case.

One of the main images in an earlier detention memo from inside the Capitol is indexed to Pezzola, so that may be the discovery in question. 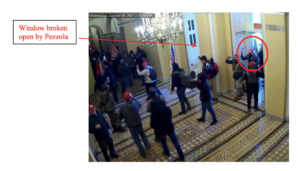 This seems like a mistake that the government is simply doubling down on. But if you haven’t found more compelling evidence after four months, what are the chances you will?