Merrick Garland Agreed He Would Go after January 6 Kingpins, if Evidence Merits 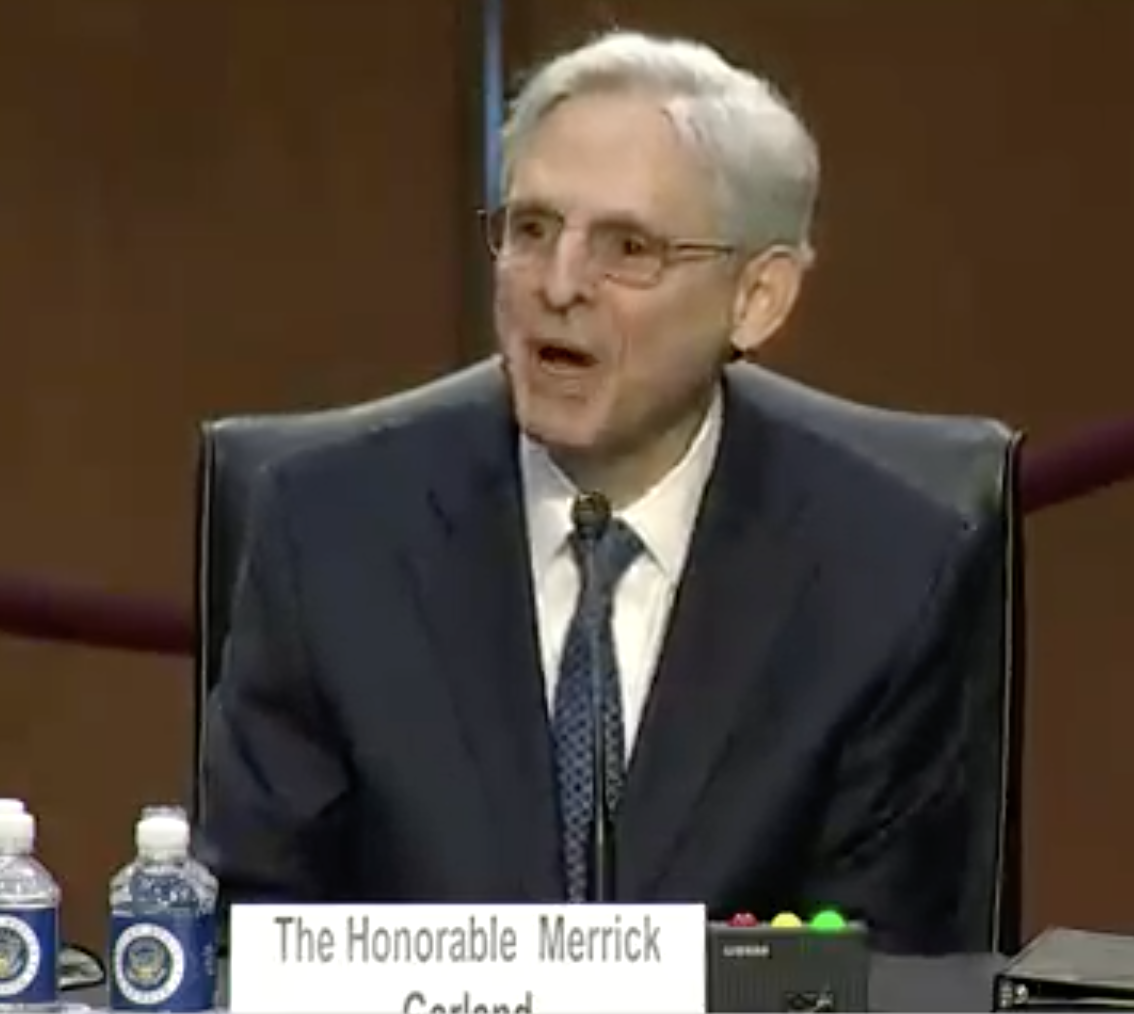 There continue to be questions about how we’ll ever get accountability for January 6 without a January 6 commission to do that work.

In an exchange yesterday, for example, Bart Gellman asked what questions we’d most want a January 6 commission to answer, and I responded, “Why there’s such a broad belief that a criminal investigation won’t answer those questions.” In response, NYT’s Alan Feuer speculated that,

DOJ’s 500ish criminal cases will not ultimately touch the potential liability in 1/6 of political figures including but not restricted to the former president.

This prosecution writ large is (speculation alert) likely to be restricted to verifiable perpetrators, not possible instigators. The range of crimes (s.a.) are likely to include the known ambit: obstruction, assault, civil disorder, trespass etc. Sedition may not be charged.

Things can change. Evidence can emerge. But after five months, it seems unlikely (speculation alert) that DOJ is assuming the responsibility for searching out root causes as opposed to building demonstrably provable cases.

I think Feuer’s is a fair observation, though I disagree that holding “instigators” accountable is at all the same as “searching out root causes.”

In my opinion, it is way too premature to judge where a complex investigation will lead after only five months, which is an infancy in terms of such things (it took almost exactly a year from the time that FBI got the tip about George Papadopoulos until he was arrested, the first arrest of the Mueller investigation, which itself was lightning fast). And while it is true that the current universe of charges includes those crimes Feuer lays out — obstruction, assault, civil disorder, trespass — even that list leaves out conspiracy. The boilerplate description DOJ uses to describe the complexity of the investigation notes that such a list (which includes conspiracy) is non-exclusive.

The spectrum of crimes charged and under investigation in connection with the Capitol Attack includes (but is not limited to) trespass, engaging in disruptive or violent conduct in the Capitol or on Capitol grounds, destruction of government property, theft of government property, assaults on federal and local police officers, firearms offenses, civil disorder, obstruction of an official proceeding, possession and use of destructive devices, and conspiracy.

Importantly, if we believe Merrick Garland’s response to a Sheldon Whitehouse question in his confirmation hearing, the Attorney General is committed to let the investigation proceed wherever the evidence leads, specifically to include “funders, organizers, ring leaders” and even any kingpins to this insurrection.

Whitehouse: With respect to January 6, I’d like to make sure that you are willing to look upstream from the actual occupants who assaulted the building, in the same way that in a drug case, you would look upstream from the street dealers to try to find the kingpins, and that you will not rule out investigation of funders, organizers, ring leaders, or aiders and abettors who were not present in the Capitol on January 6. Fair question?

Garland: Fair question. And again, your law enforcement experience is the same as mine, investigations — investigations, you know, I began as a line Assistant US Attorney and was a supervisor, we begin with the people on the ground and we work our way up to those who were involved and further involved. And we will pursue these leads wherever they take us. That’s the job of a prosecution.

That’s why I wrote these three posts:

Together, those posts argue that if any kingpins will be held accountable, it will be through a conspiracy prosecution. I note that one of the conspiracies has already reached back to the Willard Hotel, where Roger Stone was staying and where the call patterns suggest possible consultation with people present at the hotel. And I suggest that not only will there will be further conspiracies (I’m pretty confident about that prediction) but there may be more complex prosecutions tied to people who were involved in the rallies rather than the riot or who were discussed explicitly with Rudy Giuliani (I’m far less confident about that possibility).

That doesn’t mean Donald Trump, or even Roger Stone or Rudy Giuliani, are going to prison. It’s not clear what kind of evidence is out there. It’s not clear how loyal these famously paranoid people will be without the constant dangle of pardons that Trump used to buy silence during the Mueller investigation.

But even in what we’ve seen, we’ve seen a focus on who paid for things (such as the payment to Joshua James’ wife tied to “protecting” Roger Stone), who organized buses (there are at least four defendants involved with such things) or otherwise funded transportation, as well as media promotion both before and media communications while at the insurrection worked. Thus far, Charles Donohoe is the primary person who was charged in an organizational role but who didn’t enter the Capitol, but the Proud Boys and Oath Keeper conspiracies seem pretty focused on Enrique Tarrio and Stewart Rhodes (I’m not sure how useful Rhodes would be to map out the larger conspiracy).

And that’s just what we’ve seen. We recently learned that the President’s own lawyer still doesn’t know that the investigation of Michael Cohen had started eight months before he got involved in an effort to dangle pardons, long after Mueller had already obtained Cohen’s Trump organization emails. We have no idea whose lives the FBI are unpacking with warrants that are not showing up in arrest affidavits. Certainly, the FBI and DOJ are getting far more thoughtful about what gets shared publicly when.

My point is assuredly not to promise that Roger Stone and Rudy Giuliani will go to prison. But the question of the possible scope of the January 6 investigation, as distinct from the likely one, is dictated primarily by the structure of the conspiracy uniting people who legitimately entered into an agreement with each other to achieve the goal that every currently charged conspiracy shares: to obstruct the certification of the vote count on January 6. If Trump’s associates entered into an agreement with the Proud Boys and Oath Keepers, if there’s evidence of them doing so, and if marginally credible witnesses are willing to trade cooperation for less time in prison, then some kind of accountability is possible, albeit still highly unlikely.

That probably does rule out some accountability, even assuming a best case scenario. For example, with a few possible exceptions, I see no way that the conduct of members of Congress would get beyond Speech and Debate protections. Similarly, I don’t see how any conspiracy investigation would work its way up from the crimes at the Capitol to incorporate anyone at DOD stalling the National Guard response.

But as I noted to Gellman, I want to know the basis for certainty about what the investigation might discover. Because the investigation is already just two degrees of separation from Donald Trump via both Rudy and Stone, and that’s just what we can see looking at what prosecutors have been willing to share.