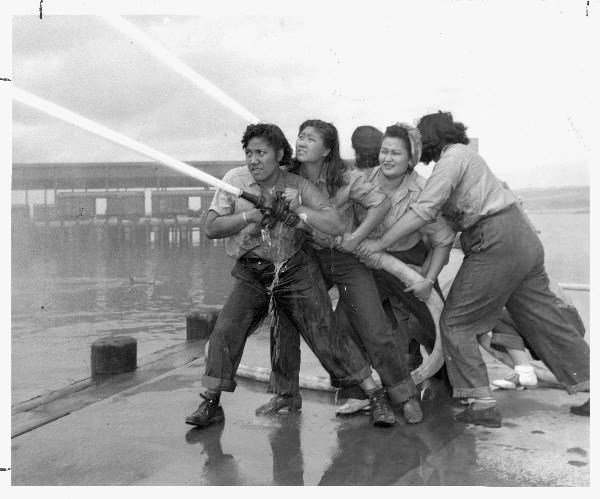 In my personal library I have a copy of my textbook from American Government, a mandatory class when I was in high school in Michigan from 1974-1978. Most students took this class in their senior year as it was understood they needed familiarity with government before they voted for the first time, usually within a year of becoming seniors.

Covered about week three of the school year, the subjects of immigration and citizenship followed an overview of basic forms of government, the American republican system of democracy, and the Constitution.

It was the first time in my life that coursework directly addressed any topic related to my family’s origins – specifically my father’s Chinese heritage.

This is it, all of it from that class, in three paragraphs, one of which is a footnote.

Oriental and Personal Exclusion Policies. Congress placed the first major restrictions on immigration with the passage of the Chines Exclusion Act in 1882.[3] At the same time it barred the entry of convicts, lunatics, paupers, and others likely to become public charges. Over the next several years a long list of “undesirables” was composed; for example, contract laborers were excluded in 1885, immoral persons and anarchists in 1903, and illiterates in 1917.[4] By 1920 more than thirty groups were listed as ineligible on grounds of personal characteristics.

[3] The law was intended to stem the flow of “coolie labor” to the Pacific Coast; the Chinese could and did work for far less than white laborers, especially in the mines and on the railroads. By 1924 all Orientals had been excluded except for temporary visits. The policy was relaxed somewhat during World War II when provision was made for the admission of limited numbers of Chinese, Filipinos, and natives of India. Since 1952, immigration from each independent country in the Far East has been regulated by the quota system.

Just how broad the 14th Amendment’s statement of jus soli is can be seen from one of the leading cases in the law of citizenship, United States v. Wong Kim Ark (1898). Wong Kim Ark had been born in the United States to parents who were citizens of China. After an extended visit to China, he was refused entry to the United States by immigration officials at San Francisco. They insisted the 14th Amendment should not be applied so literally as to mean that he was a citizen. They held that as an alien he was prohibited from entry by the Chinese Exclusion Act of 1882. The Supreme Court, however, ruled that under the clear words of the 14th Amendment Wong Kim Ark was, indeed, a native-born citizen and that the Chinese Exclusion Act could not be applied to him.

Because he and his immediate family members left no documents like journals, a total of 318 words in Magruder’s American Government, fifth edition circa 1971, are all I have to understand why my great-grandfather ended up staying in Hawaii rather than coming to the U.S. mainland.

There was nothing in the textbook about other laws affecting immigration and citizenship of Chinese coming to the U.S. – nothing about:

Nothing at all about state and local restrictions affecting Chinese immigrants like:

And while there was a generalized discussion of the Naturalization Act of 1790 affecting naturalization of “free white person[s] … of good character,” there’s nothing about its affect on Chinese who weren’t considered white.

As recently as 2018 (!) an alien land law remained in effect in the state of Florida which denied Asian farmers the right of land ownership; the law was finally overturned by voters that year though they had rejected its repeal in 2008.

All of this is particularly galling knowing that over the course of the project, the Transcontinental Railroad was built with the labor of as many as 20,000 Chinese immigrants – enough men to populate a small city. In my American History class the achievement in which the west and east railroads were joined was covered with little more than a passing nod.

Just look at this famous photo taken at the celebration of the railroad’s completion: 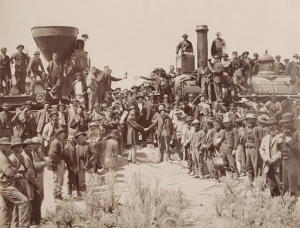 Chinese immigrants made up as much as 90% of Central Pacific Railroad’s workforce. How many Chinese faces do you see in that photo? The Chinese paid dearly, hundreds having died from the dangerous work and conditions, paid far less than whites on the same job, only to be literally erased.

It’s also particular painful over the last couple of weeks observing the anniversary of the Tulsa race massacre in which Black Wall Street residents were murdered, knowing that there have been multiple massacres in American history of Chinese Americans which have gone unobserved. Granted, there have been more massacres of Black Americans throughout American history like the 1920 Ocoee massacre, but like the thousands of railroad workers the Chinese victims of white rage since the 1800s received a dearth of recognition.

How many U.S. textbooks contained references to these violent assaults on Chinese American communities during which whites drove out residents after attacking and sometimes killing Chinese Americans:

Likely none. Perhaps it’s just as well my great-grandfather never made it to the mainland, becoming an American citizen after the U.S. annexed Hawaii in 1898 and granted Hawaii’s citizens U.S. citizenship in the process of establishing the Hawaii as a territory.

It’s funny Donald Trump forgot this bit of history each time he denied Barack Obama’s U.S. citizenship, yet more deliberate erasure. Each time I heard about Trump’s birtherism I wondered if my family’s citizenship was likewise being called into question for being both brown and born in Hawaii.

All of this is to say that the rabid state-level attempts to excise teaching the truth of America’s history is another racist effort to police brown people and erase them while continuing to siphon their value (i.e., keep working and contributing to Social Security and taxes, but die early from the same kind of racist neglect extended to Americans of color through the nation’s history.)

Hello again, colonialism, this time occupying not only brown bodies but the public’s mind, whitewashing the past.

I won’t use the phrase which was honestly and earnestly applied to the body of knowledge which teaches all of America’s history, including its pre-nation origins. I respect the persons behind it, but the phrase or label has become toxic, deliberately made so by a counter movement intended to invoke a reflexive negative reaction in a particular audience.

That I will call out for what it is: it’s white supremacy and nationalism with oligarchic sponsors, attempting to sanitize its wretchedness and avoid disclosure of its ongoing toxic effect on this country by insisting the history of Black Americans is removed from classrooms.

It’s naked racism, fighting against a near-term future in which half or more of the U.S. is not white, in which people like me and my family are a part of a new majority.

It’s a raw struggle for continued domination over the narrative through which they cling to power – the falsehood that America is ever-innocent and eternally white, that its emergence over the last 402 years didn’t depend on the physical, economic, and political subjugation of non-white humans and their nations, even now on a rolling basis.

It’s desperate denialism which cannot accept this country began as multiple layers of theft, constructing an illusion of a vast and empty space waiting for European whites to fill it, suppressing the truth that forced labor by brown people helped turn this space once occupied by indigenous brown people into the precursor entity which became the largest economy in the world.

Fuck all of that. Fuck the erasure which denies people of color have been an intrinsic part of this country’s emergence and too often under violence.

No country is perfect. Absolutely none; it’s the story of humanity. A good many countries are now or have been occupiers or occupied over the history of mankind. Changes in boundaries and country names through human history often came with atrocities. There are some truly awful histories like that of the former Belgian Congo and the more recent Cambodia under Khmer Rouge, South Africa’s apartheid past, and now the horrors of the Israel-Palestine conflict and China’s carceral Xinjiang province.

In this the U.S. is not alone. It’s simply a younger country than the United Kingdom whose English forebears injected their brand of slavery into this nation’s history by bringing enslaved people of Ndongo ashore into what is now the state of Virginia.

The same nation later “discovered” Hawaii, encouraging the first wave of colonists and their European diseases which over the next hundred-plus years would wipe out roughly 80-85% of Hawaiians.

This is in part why Hawaii became a territory and is now our fiftieth state. There were too few Hawaiians left to mount a vigorous rejection of colonialism, to defend against the seizure of its monarch. Magruder’s American Government gave even less text to the process by which Hawaiians’ sovereign was deposed and its government replaced as American sugar plantation owners desired, in order to reduce taxes on their products.

I can’t recall exactly how much my American History text expended on Hawaii but I doubt it was little more than a page.

In spite of the wrongs done by Britain and then the U.S. to the small sovereign Pacific nation, it is a bulwark of islands guarding the remote mainland, its residents ready to defend their nation as they were in 1941. 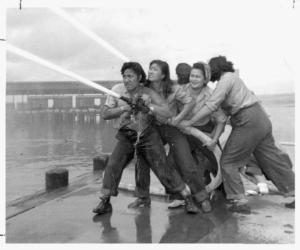 The women in this U.S. Navy photo who were training to fight fires in Pearl Harbor naval shipyard aren’t all white. They are like me and my family – mixed race, some Hawaiian, some Chinese. There were more who were Filipino and Japanese. Let’s not forget war hero and former senator Daniel Inouye of Hawaii, also of Japanese heritage who served his country in WWII with distinction along with other tens of thousands of other Japanese Americans even as 120,000 more civilian Japanese Americans were interned.

These Americans didn’t withdraw and withhold their efforts because the nation which claimed their island as territory was at that time majority white. They signed up to serve the military as did many other local residents who likewise weren’t all white.

Like so many other non-white Americans — Black American descendants of slaves and later immigrants from African nations, Vietnamese and Latin American immigrants, Native Americans who were here all along, so many more — they are part of our complete history and are entitled to be remembered and taught in classrooms.

Any and all of these groups are worth more than three paragraphs. All America deserves a richer, more complete picture of itself. Their story is our story; it shouldn’t be muted, silenced, erased.

Accept the truth: this is what America looks like at its best, warts and all.

“Target:” A Vocabulary Lesson for Adam Schiff How Don McGahn Distracted the NYTimes from the Subpoenas Known To Be Proble...