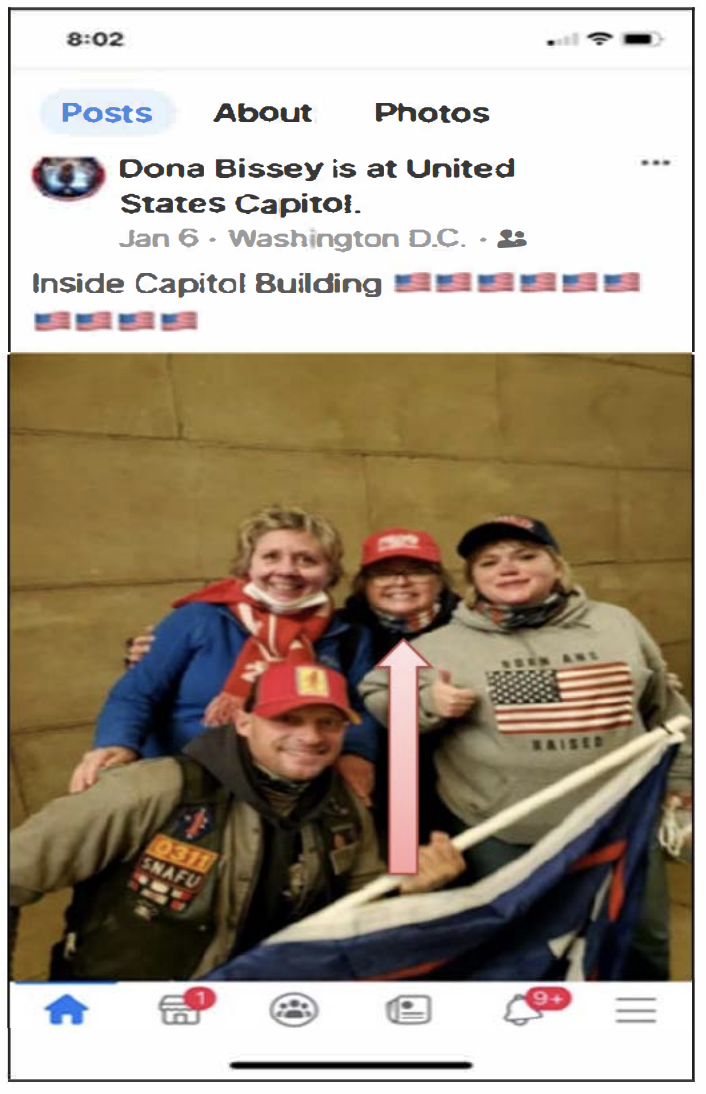 Today, Anna Morgan-Lloyd, a 49-year old grandmother from Indiana was supposed to be sentenced to probation on her misdemeanor trespass charges relating to January 6. That has been postponed on account of the Juneteenth holiday. But I suspect the courts and the government hope that other sentencing hearings — including that of Jessica and Joshua Bustle, who pled guilty on Monday — will take place after Morgan-Lloyd, so as to make hers the model of how to earn a (three-year) probation sentence for participating in the riot.

In their own sentencing memo, the government laid out five factors that presumably are the ones prosecutors are using to identify those who might be offered probation deals.

The first four may be the checklist the government has used to weigh whether to charge those originally arrested on trespass charges with a felony, each of which loosely correlates with one of the felony charges used against insurrectionists (which I’ve added in brackets).

First, the Government is not aware of any evidence that Defendant’s entry into the Capitol was preplanned or coordinated with anyone else, including any extremist or organized groups. [18 USC 1512, obstruction]

Second, the Government is not aware of any evidence that the Defendant incited others to commit acts of violence or destruction. [18 USC 231, civil disorder]

Third, the Government is not aware of any evidence that the Defendant engaged in any violence towards law enforcement. [18 USC 111, assault or resisting federal officers]

Fourth, the Government is not aware of any evidence that the Defendant destroyed or stole any property from the Capitol. [18 USC 1361, depredation of government property]

The fifth factor is more discretionary — but will be important in distinguishing MAGA tourists for those who got swept up into the effort to terrorize Congress. Morgan-Lloyd spent about 10 minutes in the Capitol, but she also didn’t go to any of the places — like the Senate floor or into a Member of Congress’ office — that suggests someone got caught up in the effort to delay the vote count or to hunt down members of Congress.

I suspect this will be used to distinguish those who committed misdemeanor offenses that merit some jail time (and it’s likely to be weeks, not months), from those who will get probation.

Respect for rule of law

There’s a section of the government memo that addresses respect for rule of law, including laying out the 3-year probation expected of Morgan-Lloyd that includes five factors:

While I doubt the probation sentence will be that onerous for Morgan-Lloyd (though the government notes it is twice as long as the supervised release as she’d get if she did do jail time), for others, the prohibition on owning guns will be. To the extent this is a model for others, it will serve to either disarm former insurrectionists or criminalize owning weapons for some years.

One reason I suspect the government would prefer that Morgan Lloyd be sentenced before the Bustles is that even in Monday’s plea hearing, Jessica Bustle made a statement to insist that in addition to some horrible things she said online, she said we should pray for the country. That isn’t actually all that exculpatory, given that it may still reflect a belief that the country is in trouble because the democratic victor will become President. In any case, on Monday at least, the Bustles seemed more anxious to get this done than to express any remorse.

By contrast, Morgan-Lloyd did several things to express contrition. She watched several movies about diversity and wrote two movie reviews (for Schindler’s List and Just Mercy) showing an attempt to get out of her bubble; in the former she criticized her son-in-law’s Holocaust denialism. She also acknowledged that there are less privileged people who still suffer in the US.

I’ve learned that even though we live in a wonderful country things still need to improve. People of all colors should feel as safe as I do to walk down the street.

These may be just busy work a smart defense attorney will impose, but you never know when the process will lead someone to rethink their own bubble.

More importantly Morgan-Lloyd’s statement includes a very accurate description of how her participation in the riot helped those with violent intent.

I felt ashamed that something meant to show support for the President had turned violent. This is not the way to prove any point. At first it didn’t dawn on me, but later I realized that if every person like me, who wasn’t violent, was removed from that crowd, the ones who were violent may have lost the nerve to do what they did. For that I am sorry and take responsibility. It was never my intent to help empower people to act violently.

Again, this may reflect the work of a good defense attorney, but stating it is an important step in moving beyond the insurrection.

Finally, the government motion and Morgan-Lloyd’s statement describe the import of cooperation with law enforcement. In the government’s description, they noted she allowed her phone to be imaged and analyzed.

Third, one important aspect of promoting respect for the law is encouraging cooperation and truthfulness with law enforcement. Here, following her arrest, the Defendant fully cooperated with law enforcement and admitted to the full scope of her actions. In addition to waiving her rights and agreeing to be interviewed by law enforcement, she also allowed her mobile phone to be downloaded for substantive analysis.

Morgan-Lloyds statement described how she freely let the FBI get the contents of her phone.

I openly and honestly told them everything I could recall from that day. I gave them my phone freely to download what they needed. My phone was not locked so they didn’t need a password to get in. If it had a password I would have willingly provided it.

I have described how, especially more recently, the government seems to have been prioritizing the misdemeanor arrests of those who might have important evidentiary videos on their phone. Morgan-Lloyd describes seeing what may be the East Doors get opened from inside.

I saw the side doors being opened from the inside and assumed the door closest to me were also open because people who worked in the Capital Building walked past us. They didn’t look nervous or scared.

If she did see those East Doors open, and especially if she has some kind of video evidence, it may prove important to figure out who precisely initiated that and whether it was premeditated and coordinated with those outside the building (as seems likely).

When I first noted that the government seemed to be arresting those from whom they expected to get key evidence, I imagined that those people, especially, would get favorable terms for sentencing. The emphasis here on sharing her phone contents seems to accord with that.