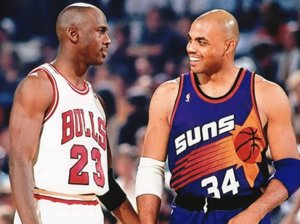 It is never over until it is over. Never. Teams going back home are usually in decent shape at 3-1, but the finals chickens are far from hatched. The series resumes in Phoenix at The Arena on Monday, and let’s go, because the Clips are a very worthy team, even without Kawhi Leonard, who does look quite unavailable for the playoffs.

Our daughter has been watching a lot of soccer, and I do not really understand it so well sometimes. Have tried to tell her about what is going on with the Suns. I was at every Suns home playoff game in 1993. Almost went to Chicago for a Finals game there, but a case quashed that idea. I saw all the others here though. She was not yet born then, that is how long it has been.

Regulars here will remember the story of me being held in contempt by a presiding judge for refusing to answer questions at a grand jury. It was literally during the 1993 NBA Finals. The judge, an uncommonly decent guy, and a basketball fan from Indiana, said show me your tickets. They were in my suit pocket, and he let me leave. My season tix partner was freaking outside when I arrived. Was the night Chuck Barkley was awarded the MVP.

There have been a few decent seasons for the Suns since, but not many in a very long time. I long ago jettisoned the season tix because they are stupid expensive, and it no longer was very fun.

The owner, Robert Sarver, is still shit, but he is no longer overly visible. The current team acts and carries itself like the old teams under Jerry Colangelo, Cotton Fitzsimmons and Paul Westfall. In short, they are a joy to watch again.

So, we shall see how the playoffs play out. But it is exciting again in the desert. I bet the people in Milwaukee and Atlanta think so too. This is a good thing.

There is also the Styrian Grand Prix from the now Red Bull Ring, which used to be the A1 Ring. Not one of the best circuits, but the grid is interesting, with Verstappen on top. It is nice to see some natural green landscape again after all that garish paint at the Paul Ricard Circuit in France last week.