The other day the government released Powerpoint presentations (Zach Rehl, Charles Donohoe) from detention hearings for the two Proud Boys, as well as the Telegram chats one or the other side used as part of those detention disputes. (The times on the chats are UTC-8, probably because they came from Ethan Nordean’s phone after it was seized in Washington; add three hours to get the time in DC.)

January 30 to February 1, Nordean and Donohoe

In general, the texts show how, in the wake of Enrique Tarrio’s arrest on January 4, Donohoe took the lead in attempting to set up two new Telegram chats — New MOSD, with just a few leaders, and Boots on the Ground, with around 60 Proud Boys (not all of whom were present, it seems) — so the Feds wouldn’t have access to their organizational efforts via Tarrio’s phone, which they correctly assumed the government had seized (though it’s not clear when the phone was exploited). The Proud Boys struggled to figure out what to do with Tarrio, with Donohoe seemingly warning not to add Tarrio back into a chat until they had confirmed he was free and using an uncompromised phone, to prevent the FBI from logging on under Tarrio’s credentials.

They seem to know that Tarrio also spoke with someone outside their circle about his flag-burning, and considered warning that person. They interspersed that conversation with discussions about how to get more Proud Boys to the riot, perhaps picking them up in Philadelphia or Greensboro. For several hours, Donohoe kept adding names, begging for help, explaining what he was doing as he went.

Because of the time crunch, Donohoe added everyone as Admins (I’m not familiar enough with Telegram to understand potential repercussions of that, with regards to FBI’s ability to get more of these chats as they arrested more Proud Boys).

On January 5, their communication plans were still in flux, with one apparent cell leader — who, on account of the redaction, appears not to have been arrested yet — communicating with his cell separately.

Nordean was supposed to be in charge, but he was AWOL for several hours leading up to 9PM (rather interesting hours on January 5 to be unreachable). 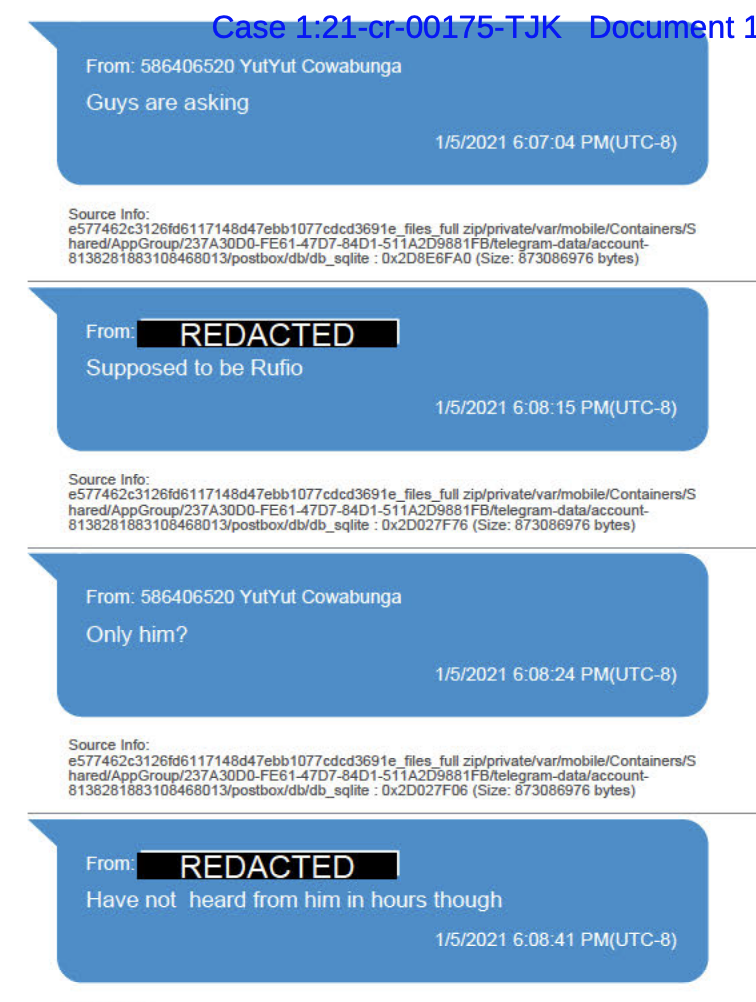 There are texts about adding someone to the MOSD leadership channel that might be consistent with Tarrio rejoining the chats after his release (the government redacted his name in some places but not all of them). 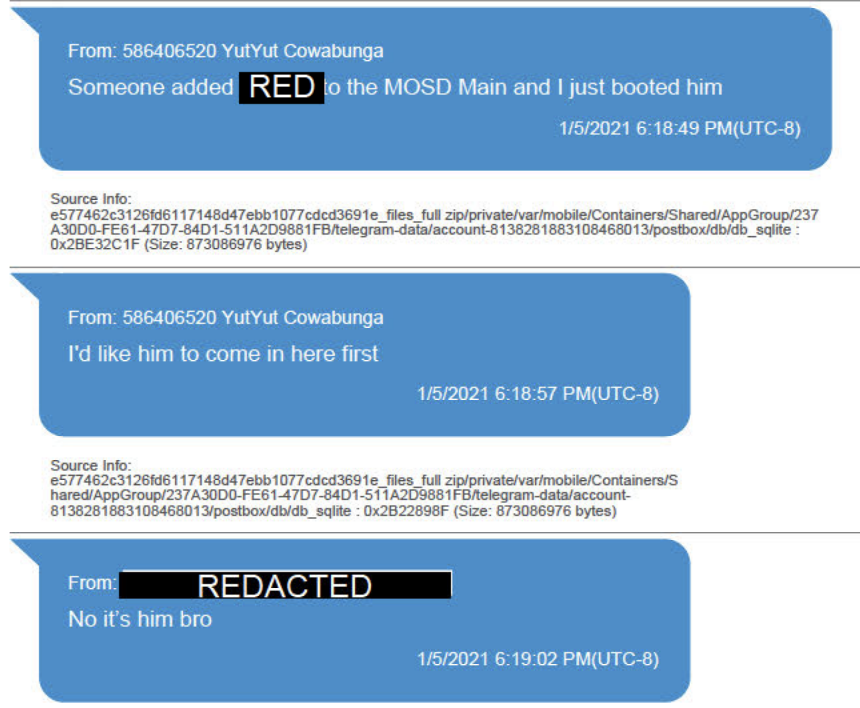 Whether or not they added Tarrio to the thread, Biggs — who was with the AWOL Nordean — seems to have been in contact with Tarrio. 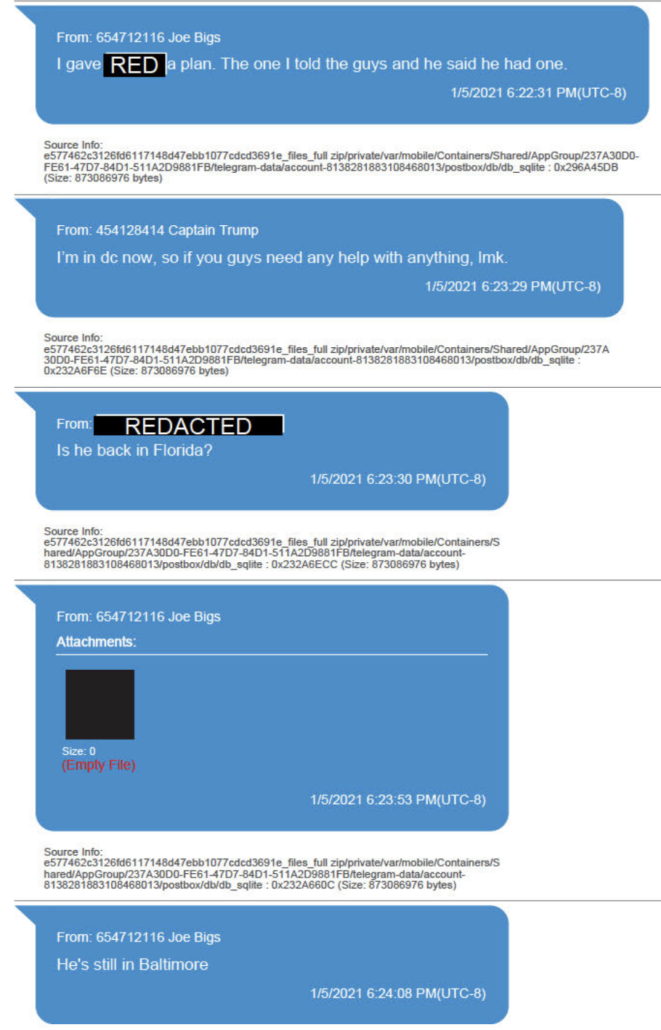 Great swaths of the texts from January 6 — almost 10 full pages — are redacted. What’s left are seemingly one after another Proud Boy (not all present) claiming to be storming the Capitol right at 1:02 PM. 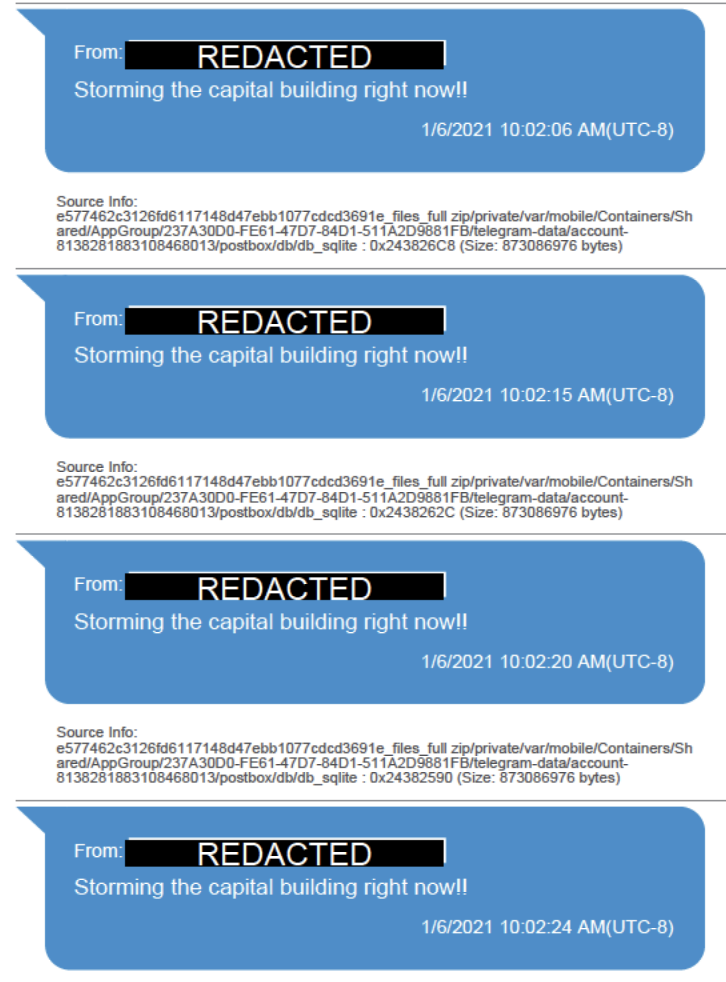 At 3:38 PM Donohoe says the Proud Boys will regroup, only to express shock that Trump[‘s Administration] would call out the National Guard against rioters.

The exhibits with just texts are actually far more redacted than the Donohoe Powerpoint — the latter of which includes damning details like Donohoe acknowledging, in advance, that they could face gang charges.

In addition, in the Donohoe Powerpoint, the government lays out a discussion from after the insurrection where someone — perhaps Biggs — expresses some kind of regret, something to make Donohoe push back.

REHL: Ah shit forgot you [Biggs] had to roll, was hoping to have some celebratory beers with yall after this epic fuckin day, I’ll drink one for ya

BIGGS: We will one day. This day lives in infamy or [sic] the ages

DONOHOE: Yeah I feel like a complete warrior. . . .I stood on that front line the entire time and pushed it twice . . . Thank God we were not wearing colors . . . We should never wear colors ever again for any event . . . Only for meetups . . .

[Approximately 12 Minute Gap with No Messages in Message Thread]

DONOHOE: Stop right there . . . All of what you said doesn’t matter . . . We stormed the capitol unarmed . . . And took it over unarmed . . . The people are fucking done . . . Wait when joe biden tells us we are all criminls [sic] [emphasis original]

The gap is interesting, however, because every Telegram text involving Nordean from the key days amounted to a deleted attachment to a text. 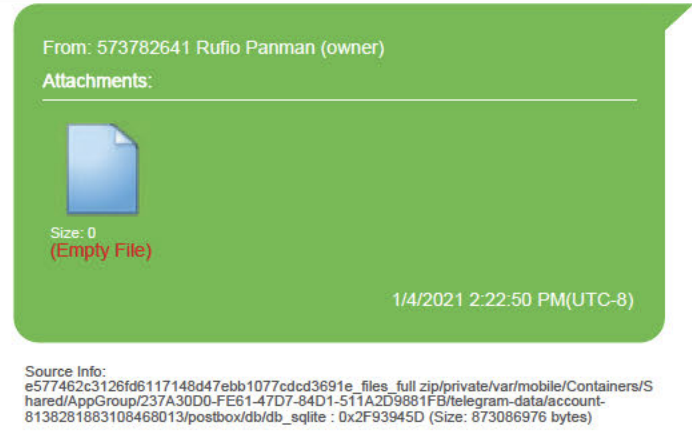 We know Nordean would text, though, because he did later in January, when he and Donohoe were discussing Nordean’s plan for a temporary move to North Carolina.

Note, if texts involving Nordean were deleted, they may not be deleted in phones seized from other participants.

Which leads me an obscure detail revealed in that Powerpoint that nevertheless explains something that has been out there for some time: the logic behind an unindicted Proud Boy co-conspirator’s status.

By March 1, prosecutors had details about all these Telegram texts. Yet in a detention hearing for Nordean on March 3, they backed off providing proof, leading to claims that prosecutors had gotten over their skis on Nordean’s prosecution. But the government rolled out the texts themselves — as well as the existence of an unindicted co-conspirator, referred to as UCC-1, in the Proud Boy Leadership conspiracy indictment on March 15. In a sealed filing before unsealing the indictment, the government had asked Judge Tim Kelly to hide all that until Rehl and Donohoe could be arrested. At the time, it seemed that UCC-1 was the likely source for the Telegram texts.

It turns out that was wrong, however. At a hearing on May 4, Nordean’s attorney Nick Smith revealed that the government had obtained all the texts from Nordean’s phone, a password for which his wife shared with the FBI (which explains the time zone and may explain why Nordean’s content was deleted when his that of co-conspirators was not).

Texts from early on January 6, not replicated (or left redacted) in the full exhibits explain that UCC-1 was not at the insurrection because he had just gotten a new job that he didn’t want to fuck up, yet.

DONOHOE: Are you here? …

UCC-1: There will be plenty more I’m sure lol

UCC-1: I want to see thousands of normies burn that city to ash today

Person-2: Would be epic

UCC-1: The state is the enemy of the people

That provides a ready explanation for why DOJ might seek to get UCC-1 to cooperate: he wasn’t present, and any role had had in decision-making leading up to the insurrection pales in comparison to Tarrio’s role. Plus, maybe he was telling the truth about trying to keep that new job. As soon as investigators saw why this guy didn’t show, they would understand a motive he might have to cooperate.

If that’s right, that not only would provide a direct witness to these leadership chats, but it might provide an even fuller set of Telegram chats than what the charged co-conspirators know about.

Tucker Carlson Burns FBI or NSA Intercepts Regarding His 30-Month Pursuit of... Carlson to McCarthy to Nunes: Obstruction or Worse?