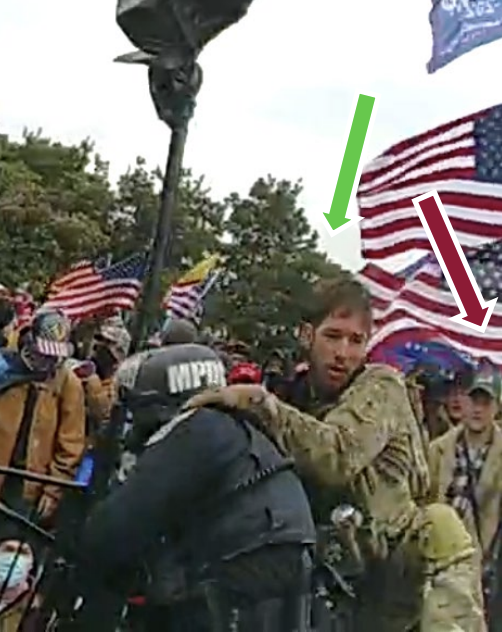 Four days after that, according to an arrest affidavit for Jonathan (Johnny) Pollock and other members of a group that assaulted multiple cops on January 6, the FBI first released a Be On the LookOut for photo of Pollock.

Days later, Pollock stopped coming to work, citing a “family emergency.” When a co-worker went to his home to pick up keys and other items belonging to their employer, Pollock’s father claimed he didn’t know where his son was.

Pollock allegedly committed the following crimes on January 6 [because the affidavit explicitly uses just a male gender, I’m using “their” here rather than he or her]:

At 1:56, he attacked cops with a pole, then charged them, dragging officers AM and ML to the ground. He then kneed ML close to their face, then attempted to choke another officer: 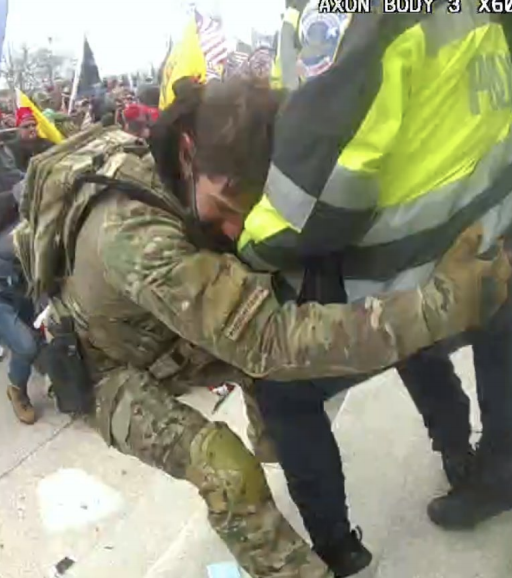 At 2:04, Pollock grabbed the riot shield from an officer at the next set of barricades, then charged the line. 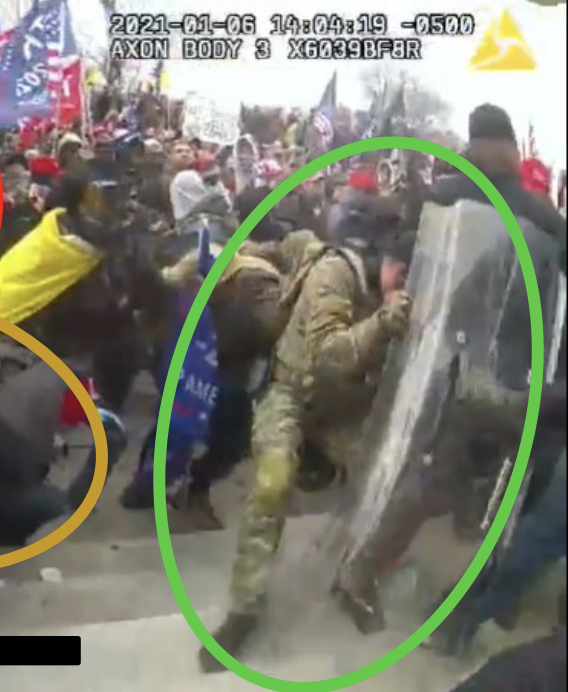 At 2:11, he took a swing at officer BR, then seized another riot shield, shoving it into officer JG. 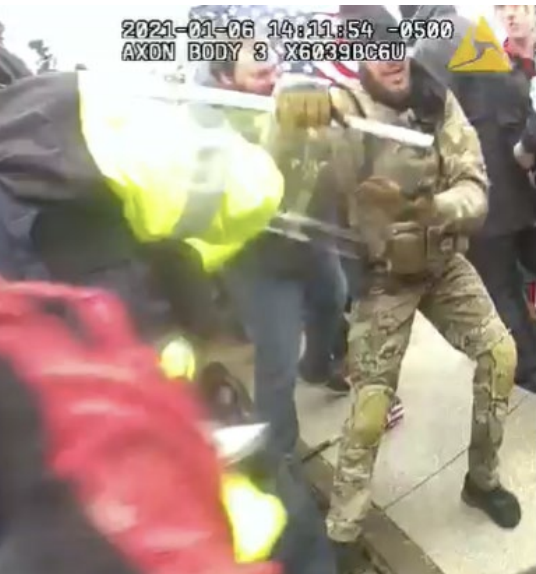 At 2:58, he Jumped AS and attempted to pull them over the barricade: 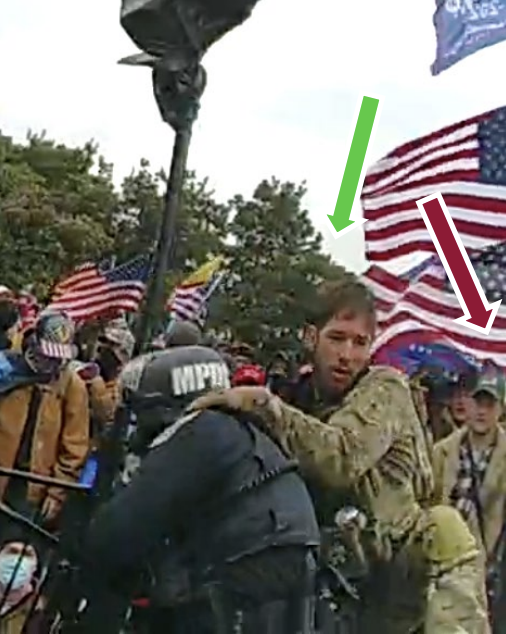 At 4:29, he used a stolen riot shield to pin officers within the tunnel for about 15 minutes so they couldn’t defend against attacks (this may also have prevented them from assisting Roseanne Boyland). 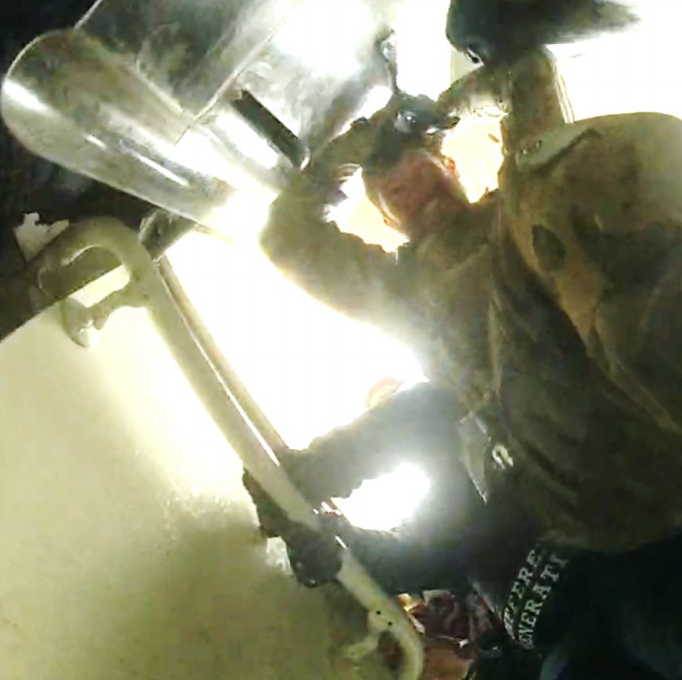 Altogether, Pollock has been indicted for 7 counts of assault and 3 counts of stealing shields. And yet he remains at large, even after his sister Olivia and three other associates charged along with him were arrested last week.

These people were not charged with conspiracy or even attempting to obstruct the election.

A detention memo for his co-defendant, Michael Perkins, suggests Pollock’s group walked to the Capitol as part of a larger group that assembled at the Washington Monument, suggesting there may be some tie to the Proud Boys.

Perkins, his codefendants, and others who engaged in the attacks were part of a larger group of individuals who appear to have traveled together from the Washington Monument to the Capitol grounds on the afternoon of January 6, 2021. Many members of this group are related and/or from the same area of Florida and likely planned their travel both to and from Washington, D.C. and within the district in concert with each other.

Yet there’s no mention of any Proud Boy affiliation either.

Perhaps the government hasn’t charged these five as a conspiracy because they’re hiding their case from Pollock. But the arrest affidavit suggests the group left relatively few digital tracks for investigators (or had thoroughly scrubbed them by March 17, when the FBI conducted its first overt interview relating to Pollock). Of the five arrested, only Olivia gets mentioned as carrying a cell phone that placed her at the Capitol. The arrest affidavit describes Johnny boasting and sharing cell phone pictures of his role in the insurrection with co-workers, but it describes no social media use by him (and the affidavit may suggest that Pollock left his phone at his home before he left). Two of the other defendants, Joseph Hutchison and Josh Doolin, were tied to the Pollocks in part by their tie to the Pollock family gun shop, but also through a social media post that a Pollock family member (perhaps a sibling that also attended the riot) had posted. A different Pollock relative posted images of Jonathan and Olivia on social media. Perkins’ wife, who also attended the riot, also appears in social media.

Mostly, though, the FBI suggests that this is a case built off the Body Worn Cameras of the cops the group assaulted and surveillance footage, not social media clues so typical of other insurrectionists.

And that was all before Johnny managed to avoid FBI capture during at least three months on the lam.

Update: One of the online researchers who tracked this group told me that Pollock had an iPhone 8 with him and the group did little more than nod at the Proud Boys. It was a much larger group, and included Pollock’s father.