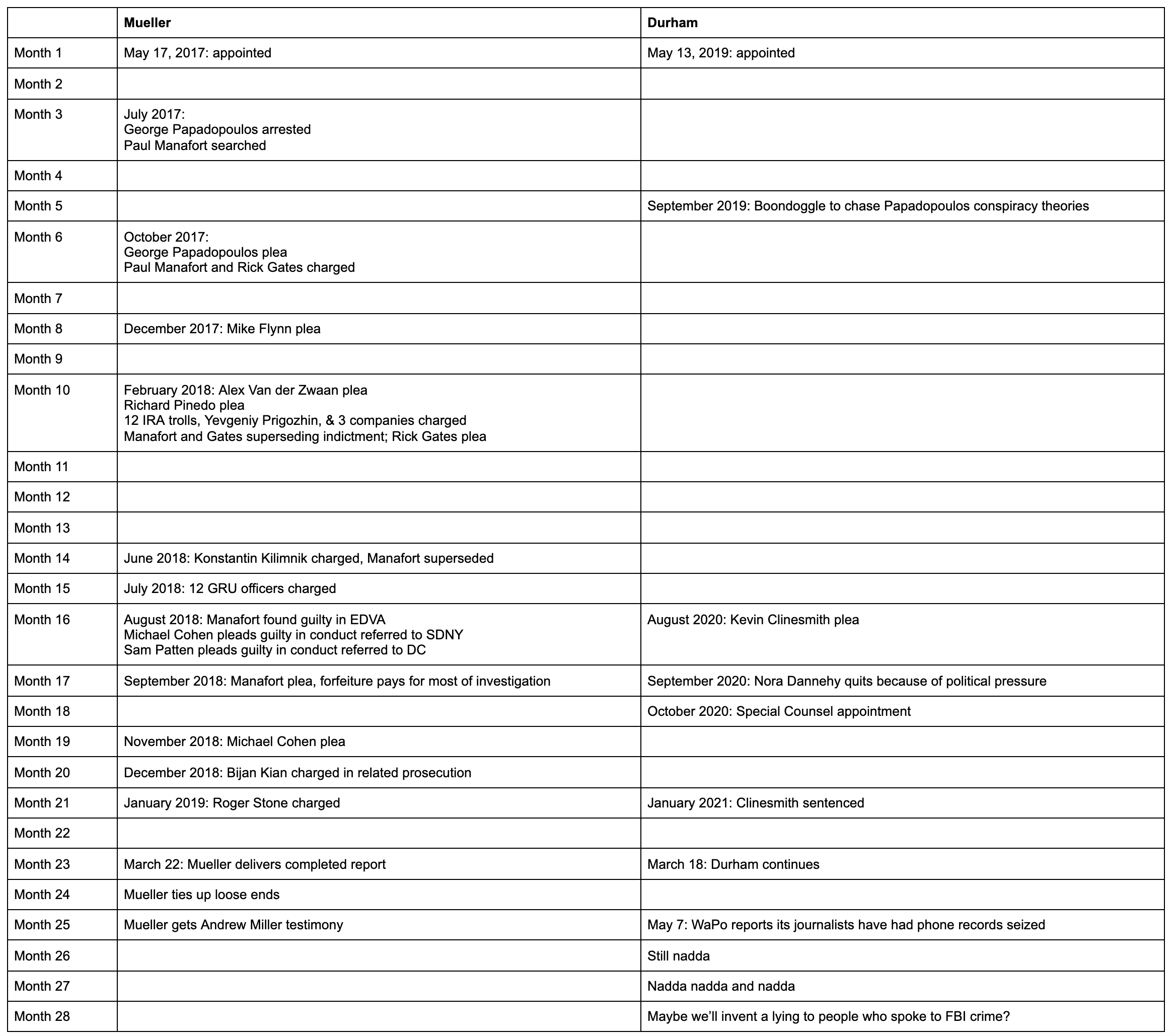 On Friday, WSJ had an article that might have been titled, “John Durham won’t charge any of Donald Trump’s favorite villains.” It reported that Durham is still considering charges against people outside of government and “lower-level FBI employees.”

Mr. Durham has been examining potential criminal charges against several lower-level Federal Bureau of Investigation employees, and people who aren’t in government, according to people familiar with the matter.

But it doesn’t note that, even if Durham does charge those involved in the dossier, it will still mean that many of Trump’s claims about the Russian investigation were investigated for longer than Mueller took, only to fall short of the crimes Trump claimed had happened.

Jim Comey was the FBI Director, not a low-level employee. In spite of Durham’s effort to prove that Comey leaked details of Trump’s efforts to protect Mike Flynn to get a Special Counsel appointed, if Durham is contemplating charges only against “lower-level” FBI employees, he has not found proof that Comey broke the law.

Andrew McCabe was the FBI Deputy Director, not a low-level employee. In spite of Durham’s apparent effort to insinuate that McCabe micromanaged the Russian investigation, pushing investigative steps FBI Agents didn’t support, if Durham is contemplating charges only against “lower-level” FBI employees, he has not found proof that McCabe broke the law.

Bill Priestap was the Assistant Director for Counterintelligence, not a low-level employee. In spite of Durham’s effort to interpret Priestap’s notes as proof that the FBI set up Mike Flynn, if Durham is contemplating charges only against “lower-level” FBI employees, he has not found proof that Priestap broke the law.

Peter Strzok was the Deputy Assistant Director when he opened Crossfire Hurricane, not a low-level employee. In spite of Durham’s extended efforts to suggest that Strzok sustained an investigation into Donald Trump out of some kind of animus or perhaps compensation for his role in Hillary Clinton’s defeat, in spite of Durham’s seeming efforts to suggest that Strzok pushed others to obtain legal process he refused to approve earlier in the investigation, if Durham is contemplating charges only against “lower-level” FBI employees, he has not found proof that Strzok broke the law.

Lisa Page was the Counselor to the Deputy Director, not a low-level employee. In spite of Durham’s efforts to suggest Page had some role in the investigation that DOJ IG already said she didn’t, if Durham is contemplating charges only against “lower-level” FBI employees, he has not found proof that Lisa Page broke the law.

Durham has interviewed few if any of these senior people, who’ve been targeted for years. Without even hearing their side, apparently, Durham has decided they’re not the villains Trump made them out to be.

But Trump’s chief villains aren’t the only targets that — if this report is correct — will not be charged.

The WSJ notes that Durham won’t charge anyone for concluding that Russia not only wanted to defeat Hillary, but affirmatively wanted Trump in power.

Beyond the role of outside tipsters, Mr. Durham’s investigation examined how the FBI first came to open the investigation, as well as a separate 2017 U.S. intelligence report that concluded Moscow interfered in the presidential election in part to help then-candidate Trump.

Mr. Durham’s team isn’t expected to bring any criminal charges in connection with that intelligence assessment, some of the people said.

So John Brennan won’t be getting charged either, in spite of calls for that to happen.

In spite of the seeming confirmation that four years of insinuations about these people were wrong, the right wing has responded to the seeming news that Peter Strzok won’t be charged with delight.

High Gaslighter Catherine Herridge posted the same partially unsealed footnote (footnote 350 discussed in this post) twice as well as a passage about what the FBI had learned by September 2017, three months after the last FISA order targeting Carter Page. 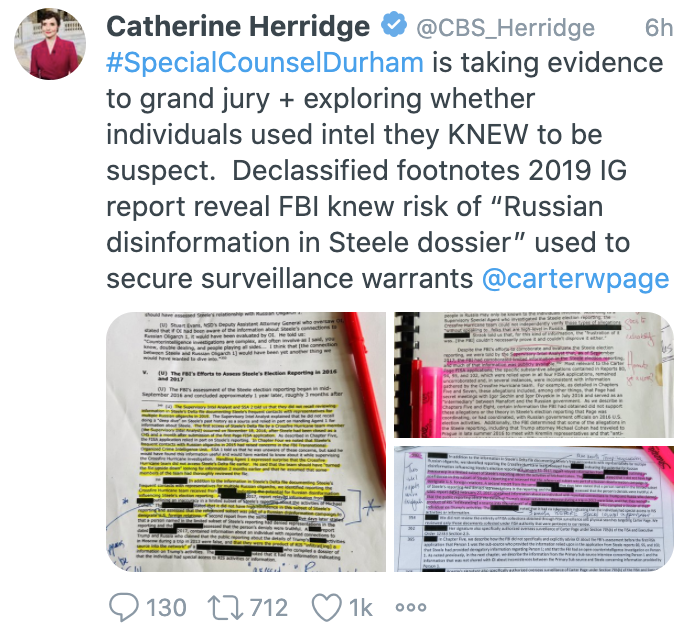 Jonathan Turley (who ignores the WSJ description that any FBI targets are low-level) claims that Durham’s current focus could “implicate some of the most powerful figures in politics” in his final report, while getting a slew of details (about Bruce and Nellie Ohr, especially) wrong.

The report in The Wall Street Journal said Durham is presenting evidence against FBI agents and possibly others in the use of false information or tips at the start of the Russia investigation in 2016. Those “others” could include a virtual who’s who of Washington politics, and even if they are not indicted, Durham could implicate some of the most powerful figures in politics in his final report, expected in the coming months.

This cross-pollination between the campaign and the Justice Department was evident in the strange role of Bruce Ohr, a senior Justice official who was later demoted for concealing his meetings with people pushing the Steele dossier; his wife, Nellie Ohr, worked for Fusion GPS as a researcher on Trump’s purported connections to Russia. Justice Department Inspector General Michael Horowitz subsequently found that Bruce Ohr acted improperly and committed “consequential errors in judgment.”

Durham also is reportedly looking into information concerning Alfa Bank, a privately owned commercial bank in Russia. That information led to possible access to the Trump campaign server. The Alfa Bank controversy is likely to make a number of powerful people particularly uneasy. Clinton campaign-linked figures such as Fusion GPS co-founder Glenn Simpson allegedly pushed the debunked claim that the Trump campaign had a server linked directly to the bank, which in turn was linked to Vladimir Putin and his cronies. The Alfa Bank conspiracy reportedly was pitched to the Justice Department, including in contacts with Bruce Ohr.

Glenn Greenwald, after spending years mocking the prosecutions of Trump’s Campaign and Deputy Campaign Manager, his personal lawyer, his National Security Advisor, a foreign policy advisor, and his rat-fucker — four for covering up what happened in 2016 — and after pushing the Hunter Biden laptop allegedly funneled to a different Trump personal lawyer who is currently being investigated for influence peddling with Russian assets — speaks gleefully of “already one guilty plea: seems like more criminal charges are coming.” 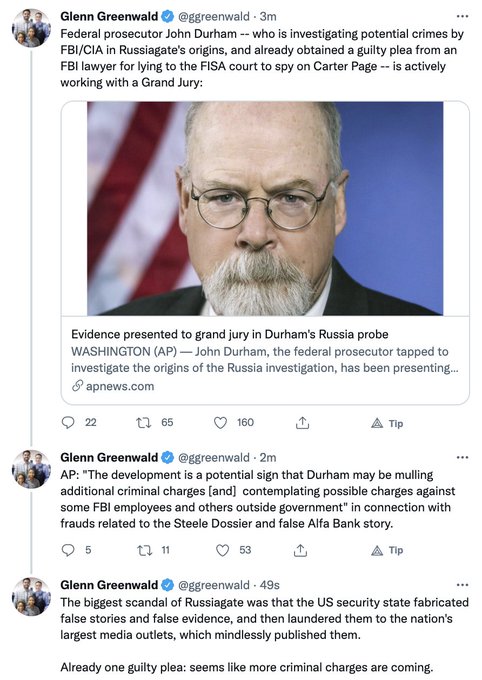 The pseudonymous TechnoFog[gy] highlights the claims of a Russian, Olga Galkina, who — if the dossier was indeed filled with disinformation (and I believe it was) — was the source for much of it, while complaining, in the same breath as they magnify Galkina’s claims, that Igor Danchenko might not be aware that those like Galkina who fed him garbage were doing so for Russian intelligence.

More and more, Durham appears to be chasing what an elaborate lawfare effort from the Alfa Bank oligarchs are throwing out. The effort, like the dossier itself, is transparently problematic, particularly given that FBI debunked it early. The dossier had little to do with the investigation of anyone but Carter Page; the Alfa Bank allegations were entirely a distraction from the investigation. If Durham wants to stake his report on that, it has the potential of making it an easily discredited piece of Russian propaganda.

What If the US Had Fought the Saudis Instead of the Taliban? There May Well Have Been an Intelligence Failure in Afghanistan