The *How* of Owen Shroyer’s Arrest 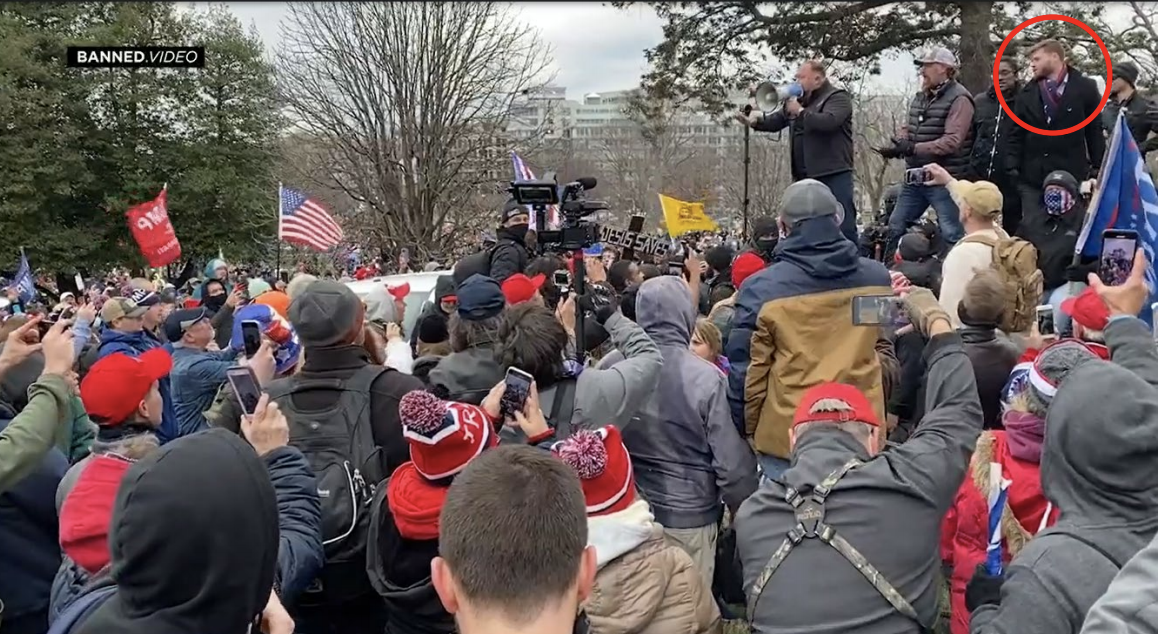 Because of the other problems with this article, I don’t know what to make of the single piece of news in it. As noted above, a former senior law enforcement official claims that, “there was no grand scheme with Roger Stone and Alex Jones and all of these people to storm the Capitol and take hostages.” That makes sense with respect to Alex Jones; his videographer was arrested long ago and remains charged only with trespass.

Zoe Tillman first reported that InfoWars’ Owen Shroyer had been charged. A picture from the affidavit shows Shroyer on stage with Alex Jones and (though he’s harder to see) Ali Alexander, a key organizer for the events underlying the riot. Jones and Alexander were critically responsible for bringing the crowd first to DC and then to the Capitol, and Jones also allegedly paid for some of the rally (at a time when his show was in real financial trouble). 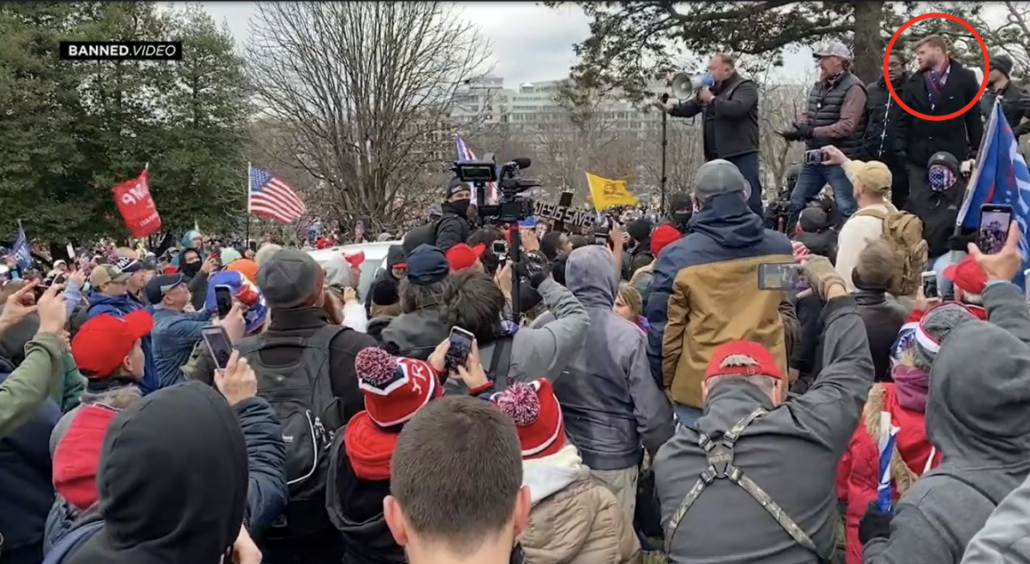 How DOJ charged Shroyer — at this point, just for trespassing charges — is as interesting that they did.

Shroyer is not alleged to have gone into the Capitol. The closest the affidavit places him is on the East side steps, right behind Jones and (I believe) with Alexander right in front of Jones.

The inclusion of this picture reminds me of how often Oath Keepers filings talk about the others who were also on the East side at the time they breached the Capitol.

Not entering the Capitol is not itself a bar on charges. After all, Couy Griffin was charged for his presence on the West steps, charges that Trevor McFadden didn’t throw out when he had a chance.

But Shroyer is a media personality with a claim to being a journalist. So DOJ offers more to justify it.

As the affidavit lays out, back during Impeachment 1.0 on December 9, 2019, Shroyer got himself arrested for accusing Jerry Nadler of treason.

He wasn’t charged for that until January 17, 2020, and so didn’t resolve the case with a Deferred Prosecution Agreement until February 25, 2020. What happened with Shroyer is what other January 6 defendants claim should have happened to them: misdemeanor charges in DC Superior Court, followed by a deferral.

As part of Shroyer’s DPA, he was required to do 32 hours — just four days! — of community service. He seems to have fiddled around with what entity he was going to do service with, but at one point he claimed he was going to do it with the Sinai Pentecostal Church’s Reverend Samuel Montoya, who also happens to be the father of InfoWars’ videographer, who himself got arrested in April. 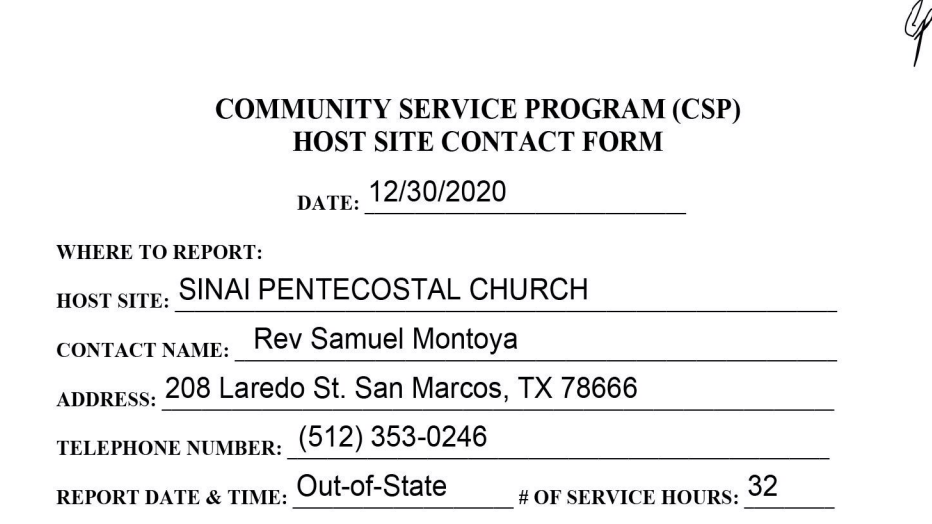 Which is another way of saying that Shroyer was dicking around with the meager community service he was required to do as part of his DPA.

The other part of Shroyer’s DPA, aside from the community service he was clearly dodging, was a requirement that he not similarly engage in such disorderly conduct again at the “Capitol,” which was defined by a map that Shroyer signed, which actually may be broader than the protected space that DOJ is charging in the January 6 cases (and so easily encompasses the stage on which Shroyer appeared with Alex Jones).

Due to the nature of the offense, the DPA included the following special conditions for SHROYER:

1. The defendant agrees not to utter loud, threatening, or abusive language, or to engage in any disorderly or disruptive conduct, at any place upon the United States Capitol Grounds or within any of the Capitol Buildings with intent to impede, disrupt, or disturb the orderly conduct of any session of the Congress or either House thereof, or the orderly conduct within any such building of any hearing before, or any deliberations of, any committee or subcommittee of the Congress or either House thereof.

2. The defendant agrees not to parade, demonstrate, or picket within any of the Capitol Buildings. 3. The term “Capitol Buildings” means the United States Capitol, the Senate and House Office Buildings and garages, the Capitol Power Plant, all subways and enclosed passages connecting 2 or more of such structures, and the real property underlying and enclosed by any such structure.

In addition, the term “United States Capitol Grounds” was defined to include an area delineated in a map attached to the DPA spanning the Capitol grounds from 3rd Street NW on the west side of the Capitol building, to 2nd Street SE on the east side of the Capitol building (see Exhibit A). SHROYER and his attorney each signed an Acceptance and Attorney’s Acknowledgement, respectively, for the DPA. As a result of the DPA, SHROYER had special knowledge of what areas in Washington, D.C. in and around the U.S. Capitol constituted the U.S. Capitol Grounds. [my emphasis]

In other words, whereas the thousands of other people participating in the January 6 riot might believe they’d only get into trouble if they walked in the building, Shroyer had notice that the protected grounds were broader than that. And he not only may have been subject to a broader protected grounds than those other thousands of people, but it was a violation of his DPA to do it.

The rest of this arrest affidavit is gratuitous, a speaking document to nod to where they might go with him. After all, Shroyer was uniquely prohibited from entering the grounds and being an asshole on January 6. That’s all the government would need to charge him.

But the rest is interesting because it clearly lays out evidence — at a minimum! — that he could be charged with obstruction because he specifically talked about obstructing the vote certification on January 5.

SHROYER traveled to Washington, D.C. in January 2021, and in advance of January 6, 2021, spoke of stopping the certification of the Electoral College vote. In a video1 posted to the Infowars website on January 5, 2021, SHROYER gave an address in Freedom Plaza in Washington D.C., during which he stated: “Americans are ready to fight. We’re not exactly sure what that’s going to look like perhaps in a couple of weeks if we can’t stop this certification of the fraudulent election . . . we are the new revolution! We are going to restore and we are going to save the republic!”

In another video2 posted to the Infowars website on January 5, 2021, SHROYER called into an Infowars live broadcast and said: “what I’m afraid of is if we do not get this false certification of Biden stopped this week. I’m afraid of what this means for the rest of the month . . . Everybody knows election was stolen . . . are we just going to sit here and become activists for 4 years or are going to actually do something about this . . . whatever that cause or course of cause may be?”3

That is, this is where these charges could go, once they arrest Shroyer and maybe even search his phone. They’re not charging it here — and Shroyer was legally entitled to be an asshole at Freedom Plaza on January 5, as opposed to the Capitol. But they’re making it clear where they could go.

I suspect they hoped to arrest Shroyer at a status hearing scheduled for today, but he didn’t show.

Shroyer was supposed to appear in DC Superior Court on Friday for a hearing to update the judge on the status of his case, but he did not show up, according to the docket. The prosecutor didn’t ask for a bench warrant to arrest him for failing to appear, and the judge set another hearing for Sept. 23. A lawyer listed as counsel for Shroyer said that was a mistake and he was not involved in the case.

Instead, he announced the charges on his InfoWars show, looking a hell of a lot more panicked than a well-funded white guy facing misdemeanor trespass charges should be, even as a recidivist.

This is just one of 580 arrest affidavits accusing someone of trespassing. But it certainly seems to be more than that.

Update: In my post on how one would prosecute Donald Trump, I noted that DOJ has been coy about what went down at a December 12 Stop the Steal rally, probably because (I mused) they haven’t included Enrique Tarrio in any of the conspiracy indictments. As Just Security reported back in February, Shroyer was part of that event, too.

In the video, Owen Shroyer, an Infowars personality, speaks to the crowd on a bullhorn. He is standing next to Tarrio. Shroyer hands Stone the bullhorn. Stone gives brief remarks standing beside Nordean, who appears to have his hand on Stone’s shoulder. “We will fight to the bitter end for an honest count of the 2020 election. Never give up, never quit, never surrender, and fight for America!” Stone tells the crowd. After his brief remarks, Stone passes the bullhorn back to Shroyer. Tarrio joins Stone and Nordean. Tarrio and Stone engage in an inaudible dialogue as Shroyer continues to rouse the crowd. “We got stabbed in the back by the Supreme Court tonight,” shouts Shroyer. “This was never their revolution. This is our revolution!”

Update: Apparently the stage on which Owen and Jones were is within what DOJ is treating as restricted area, but thus far has not arrested anyone for. I do believe it is the case, however, that Owen’s restricted area is larger than the one DOJ has used for January 6.

Update: Corrected that Reverend Montoya is the father of videographer Sam Montoya, per JK.