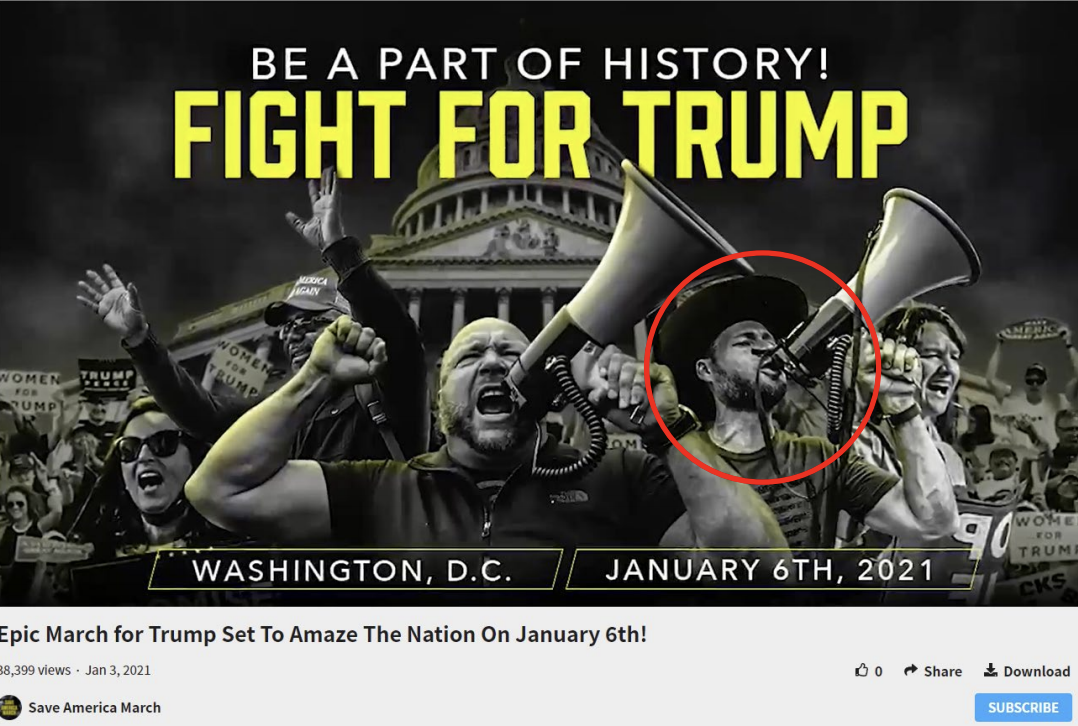 With the charges against Owen Shroyer, the government has now charged three people who had a speaking part in several rallies tied to Stop the Steal the day before the insurrection: Brandon Straka, Russell Taylor and his co-conspirators, and Shroyer. Because I’m working on some gaps in the government’s story — gaps that must be intentional, for investigative or prosecutorial reasons — I want to look at how DOJ is beginning to fill in the story about January 5.

With Walk Away founder Brandon Straka, who was arrested on January 25, the mention of his speech at the Stop the Steal rally at Freedom Plaza in his arrest affidavit was almost incidental, included along with the rest of his incendiary speech directly tied to the riot (but the affidavit didn’t include his other public comments over a broader period — for example, it doesn’t mention Straka’s role in sowing suspicion of the Michigan vote tally).

My review of STRAKA’s Twitter account on January 11, also found a video he had posted of himself speaking at a “Stop the Steal” rally held at Freedom Plaza in Washington, D.C. on January 5, 2021. As of January 13, STRAKA had removed this video from his Twitter account, but a video of the entire event had been posted to YouTube. The video showed that STRAKA was introduced by name and brought onto stage. STRAKA spoke for about five minutes during which time he repeatedly referred to the attendees as “Patriots” and referenced the “revolution” multiple times. STRAKA told the attendees to “fight back” and ended by saying, “We are sending a message to the Democrats, we are not going away, you’ve got a problem!”

Though Straka was charged with civil disorder for encouraging others to strip an officer of his riot shield, he has not yet been indicted, with or without obstruction, which these statements would seem to support. Instead, the government has gotten two 90-plus day continuances in this case with Straka’s consent, offering the explanation that, “are continuing to communicate in an effort to resolve this matter.” Straka currently has a status hearing scheduled on August 25, Wednesday, though these things do get moved quickly.

The January 5 rally at the Supreme Court (which featured some of the same people as the Freedom Plaza one) appears in the So Cal Three Percenter conspiracy indictment in part for the logistical challenges it posed.

On December 30, 2020, KINNISON sent a text message to MELE, WARNER, and MARTINEZ in which he attached a flyer advertising the January 5, 2021 rally outside the Supreme Court, at which TAYLOR, HOSTETTER, and PERSON ONE were named speakers for the American Phoenix Project. After KINNISON set this message, MELE wrote, “We need to make sure we roll into town earlier on the 5th now,” to which KINNISON responded, “We can leave Saturday.”

But it still provided cause for DOJ to mention that by December 30, Russell Taylor knew of a Stop the Steal plan to “surround the Capitol.”

Spread the word to other CALIFORNIA Patriots to join us as we March into the Capitol Jan 6. The Plan right now is to meet up at two occasions and locations: 1. Jan 5th 2pm at the Supreme Court steps for a rally. (Myself, Alan, [and others] will be speaking) 2. Jan 6th early 7am meet in front of the Kimpton George Hotel…we will leave at 7:30am sharp and March (15 mins) to the Capital [sic] to meet up with the stop the steal organization and surround the capital. [sic] There will be speakers there and we will be part of the large effort for the “Wild Rally” that Trump has asked us all to be part of. [my emphasis]

Mentioning this rally also gave DOJ an opportunity to describe Taylor promising to “fight” and “bleed” in his speech at the rally.

On January 5, 2021, TAYLOR spoke at a Virginia Women for Trump rally in front of the United States Supreme Court as part of a panel of American Phoenix Project speakers. In his speech, he stated:

I am Russell Taylor and I am a free American. And I stand here in the streets with you in defiance of a communist coup that is set to take over America. But we are awake and we are never going back to sleep. We are free Americans and in these streets we will fight and we will bleed before we allow our freedom to be taken from us. We declare that we will never bend a knee to the Marxists within Antifa, to the tyrannical Democrat governors who are puppets, and to the deep state commie actors who threaten to destroy America…. But now these anti-Americans have made the fatal mistake, and they have brought out the Patriot’s fury onto these streets and they did so without knowing that we will not return to our peaceful way of life until this election is made right, our freedoms are restored, and American is preserved.

That is, in the conspiracy indictment charging 3 percenters with organizing not just themselves to come armed to the Capitol, but others in Southern California, the earlier rally serves as both an organizational focus and a platform to sow violence.

SHROYER traveled to Washington, D.C. in January 2021, and in advance of January 6, 2021, spoke of stopping the certification of the Electoral College vote. In a video1 posted to the Infowars website on January 5, 2021, SHROYER gave an address in Freedom Plaza in Washington D.C., during which he stated: “Americans are ready to fight. We’re not exactly sure what that’s going to look like perhaps in a couple of weeks if we can’t stop this certification of the fraudulent election . . . we are the new revolution! We are going to restore and we are going to save the republic!”

In another video2 posted to the Infowars website on January 5, 2021, SHROYER called into an Infowars live broadcast and said: “what I’m afraid of is if we do not get this false certification of Biden stopped this week. I’m afraid of what this means for the rest of the month . . . Everybody knows election was stolen . . . are we just going to sit here and become activists for 4 years or are going to actually do something about this . . . whatever that cause or course of cause may be?”3

In addition, SHROYER was featured in promotional material circulated by Infowars. One promotional video urged listeners to “come to the big D.C. marches on the 5th and 6th of January, I’ll see you there.”4 The video ended with an edited graphic of SHROYER and others in front of the Capitol building. That graphic is depicted below: 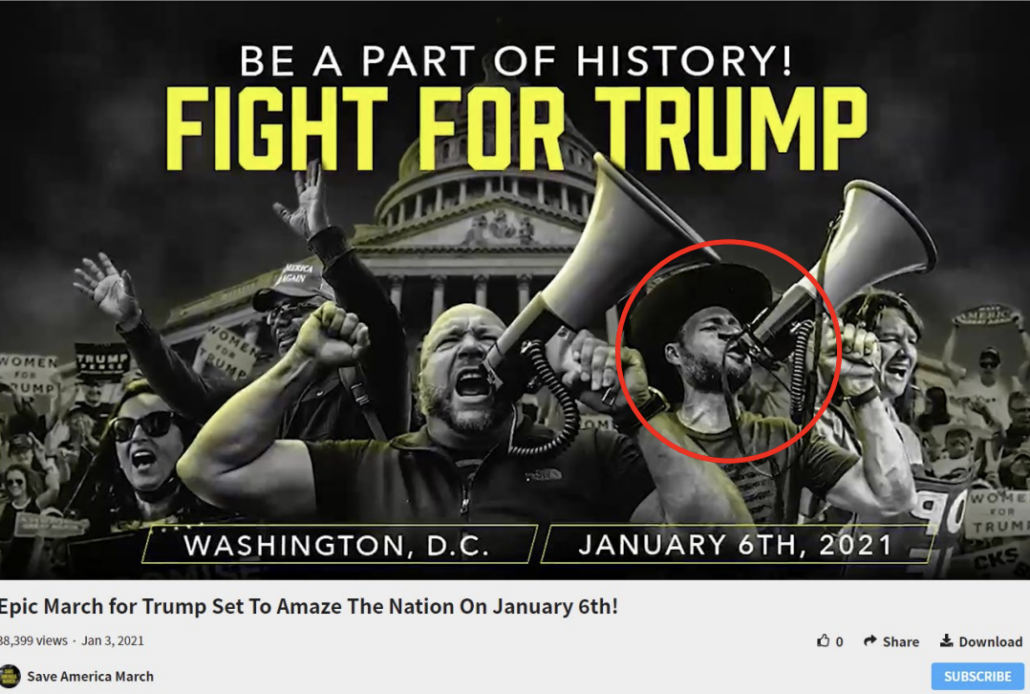 While Shroyer is circled in that graphic — which demonstrates that Jones had a plan to go to the Capitol (significantly, this is the East front) days in advance — it really is all about Jones.

As I noted, this is just a trespass arrest, like hundreds of other trespass arrests (though by charging Shroyer with violating a pre-existing Deferred Prosecution Agreement, they lessen any claims of persecution that will come as they investigate Shroyer further).

But what these three arrests together show is that those involved as speakers on January 5 seem to have had advance knowledge of what would happen the next day.

One of the other mentions of January 5 rallies thus far appears in the filings for Josiah Colt, Ronnie Sandlin, and Nate DeGrave, three random guys who hooked up on the Internet and armed themselves for violence in advance of January 6. Though they have no ties to any organized militia, the day after they went to a January 5 rally, they seemed to know there would be a second front opening at the East door, and Sandlin and DeGrave were among those charged with forcibly ensuring that door was opened.