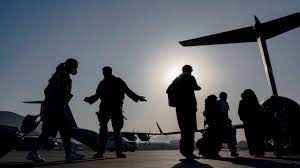 Woke up to see that one of our favorite commenters, Eureka, noted Marcy’s retweet of MirriamZary from late last night. There are so many new folks here, and such a hurricane of strife, in the four and a half years since Trump set the first Muslim Travel ban that I thought a little backstory would be good about now. So, here we go.

@MirriamZary is her Twitter handle, but her real name is Mirriam Seddiq, and she is totally kick ass. I’ve twitter known her forever, there are a certain group of criminal defense attorneys that have long known and interacted with each other, on and off of twitter, and she has very long been one.

The day Trump instituted the Muslim ban in 2017, Mirriam, her partner at Seddiq Law, Justin Eisele, and some local attorney colleagues founded Dulles Justice and camped out at Dulles airport protesting the way Muslims were being detained and denied legal immigration assistance. They gave advice to families concerned, and laid a lot of the initial basis that soon got the Muslim ban set aside. Also inspired similar efforts in international airports all over the country, including here.

It was so inspiring that, after getting some tips from her work, I got off my butt and went and joined some other friends at our local Sky Harbor airport to do the same. That occurred all over the country. Thankfully, it was not that much of a legal problem here, and most of our time went into protesting (and it was a pretty big one) for news cameras and reporters, and not into having to address legal issues and problems. Soon the travel ban was set aside, and a lot of the impetus on the ground started with Mirriam and Dulles Justice. She is a hero, and is clearly now back at it. By necessity, yet again.

So, that is the back story of MirriamZary. Updates will likely be necessary as events are unfolding quite fast. How the Afghan evacuees are treated in the US, and elsewhere, will be an ongoing story and concern for quite some time.

As a coda, for now anyway, I’d like to point out how awesome women criminal defense attorneys are. You may remember me mentioning it here at EW. I took after Kathleen Walsh almost immediately on Twitter because I was so outraged and disgusted by her demeaning article. That was just the start, I kept on for a bit, because Walsh deserved it. Another one of the evil criminal defense attorneys, my pal Scott Greenfield, did a fantastic post on Walsh’s uninformed nonsense. What Kathleen Walsh doesn’t understand is what defense attorneys, and women are a core part of them, really do. They kick ass and take names, and Mirriam Seddiq is a prime example of that.