At Lunchtime on March 15, 2017, Joshua Schulte Went Home and Got His Passport[s] 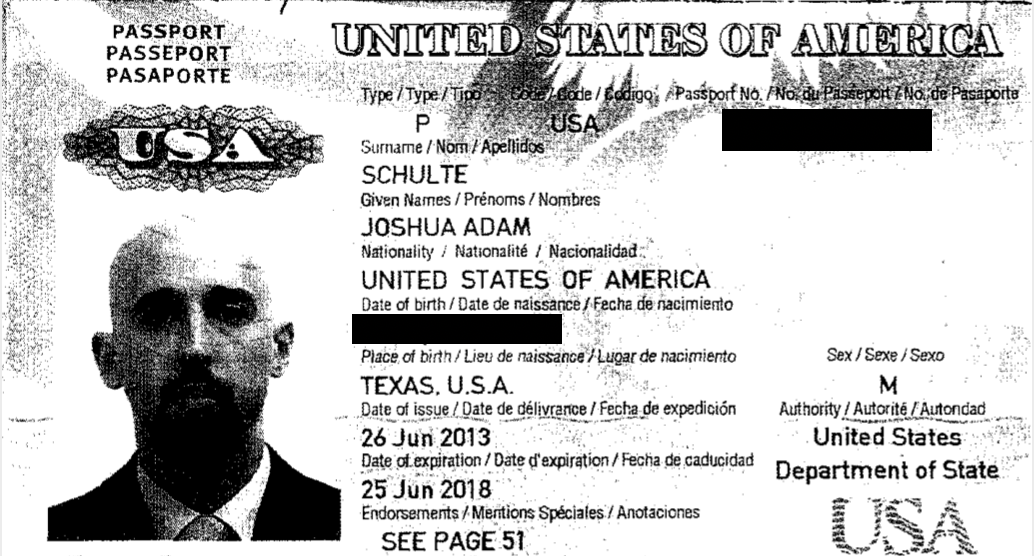 “Whoever committed the leak” of CIA hacking tools Joshua Schulte stands accused of, Schulte said in his first FBI interview on March 15, 2017, “was guilty of espionage and deserved to be executed.”

Schulte submitted the 302 from that interview to accompany a motion to suppress the initial search of his cell phone (remember, he went pro se last month, so he’s formulating this defense himself, and this challenge not one the supremely competent Sabrina Shroff mounted when she was in charge of his defense). Schulte based his motion to suppress on a claim that the FBI used a subpoena, not a warrant, to authorize the seizure of his phone.

Schulte’s challenge is, from a legal standpoint, transparent garbage. He claims that the FBI seized his phone with a subpoena. That’s not what the record he submits shows. It shows, instead, that the FBI handed him a subpoena for both grand jury testimony and his phone, then walked back to his apartment with him, then executed a search warrant that included his electronic devices among the items to be searched.

[Schulte, referred to as KP, for either Kinetic Panda or Kinetic Piranha] was presented with a subpoena to appear at a grand jury hearing, scheduled to occur on March 17, 2017. KP was also served with a subpoena, authorizing the FBI to seize KP’s phone. From PERSHING SQUARE, the interviewing Agents and KP walked to KP’s residence, 200 East 39th Street, Apartment 8C, New York, New York, where FBI personnel executed a search warrant.

SSA HUI thereafter served KP with a subpoena to appear at a grand jury hearing on March 17, 2017 and a subpoena that authorized the FBI to seize KP’s phone. SSA HUI also stated the FBI would soon execute a search warrant at KP’s residence. KP read the documents and stated he did not know what it all meant. KP was told by the interview Agents that he had every right to seek legal counsel. KP was also told by the interview Agents that he could return to the residence and be present during the search. KP voluntarily agreed to return to the residence and provide access to the search team.

The FBI obtained two warrants to search items including Schulte’s electronic devices first one permitting a covert search and then a second one that permitted that overt search. He knew of the warrant before the search of the phone occurred.

Which means the other details of the 302, which don’t help Schulte but which provide new insight on him and the investigation, are the most interesting details of this new release.

Consider his comment that the leaker should be executed. In the interview, he places blame on “Karen,” for lax security. “KP stated he didn’t want to place blame on anyone in terms of being negligent, but her approach to security was lax.” Trial testimony makes it clear this is a reference to the second-level supervisor he blamed for being disciplined at CIA. So from the very first moment, he seemed to frame Karen as a target of a ruthless Espionage investigation. He would continue from jail, suggesting the “Information War” he launched from a jail cell was actually continuous with an earlier effort to blame Karen, contrary to what Schulte argued at his first trial.

Just as interesting, the comment claiming such a leaker would be guilty of espionage matches something he said to his co-worker, “Jeremy Weber” (whom he also tried to blame for the leak) in conversations about Edward Snowden.

Q. You don’t remember him ever discussing leakers with you?

A. I, I do remember talking about leakers.

Q. Okay. What do you recall?

A. There was discussion around Snowden.

A. Schulte felt that Snowden was a — had betrayed his country.

Q. That doesn’t, you know, he seems to have strong opinions on everything. You sure he didn’t say more?

A. He probably would have call him a traitor. Said he should be executed for sure. I don’t remember specific verbiage, but he did express his typical strong opinions.

Schulte made those comments to Weber, even though the government claims to have chat logs in which Schulte said that Snowden, unlike Chelsea Manning, didn’t endanger anyone with his leaks.

More recently, Schulte has been fighting to have a home server, including a selection of Snowden files on it, returned to him.

But I’m particularly interested in the comments Schulte made about his planned trip to Cancun.

KP stated he returned to his residence during lunchtime earlier in the day to retrieve his passport so he could check-in online. KP said his passport was currently located inside his backpack, which was on the floor next to KP at PERSHING SQUARE. KP said he printed out his travel documents earlier. (Agent Note. KP reached inside his backpack and showed SA DONALDSON the documents he printed for the Cancun trip.)

KP said he understood how his potential travel abroad could cause angst at high levels of government; however, KP said if he was guilty, then he would have already left the country. KP stated he booked the Cancun trip prior to the WIKILEAKS publication. [my emphasis]

According to the trial interview of Robert Evanchec, one of the agents who conducted this investigation, they already knew of this trip when then went to interview him (indeed, they included it in the warrant affidavits). “[W]e learned that within a week’s time he was planning to travel, for the second time in his life, outside the United States.” As described in that testimony, it was why they chose to interview Schulte so early in the investigation.

Q. I think you said earlier that early in the investigation, you learned that the defendant was traveling or planning to travel?

Q. Where was he planning to travel to?

A. To Cancun, Mexico.

Q. When was the defendant scheduled to travel?

Q. How, if at all, did that impact your investigation?

A. It accelerated our need to quickly understand what this defendant had done, and what his intentions were in traveling to Cancun. As I said earlier, it was only the second time in his life that he left the United States. And certainly his departure this close to the WikiLeaks release was of concern to us, and necessitated that we escalate our investigation and look into other ways to find out why he was traveling.

Q. What did you do as a result of that?

A. As a result of that, we had planned and actually ended up interviewing the subject Mr. Schulte.

While the 302 doesn’t record it, according to Evanchec’s testimony, after telling the FBI he had gone home at lunch to retrieve “his passport,” Schulte then told FBI Agents his diplomatic passport was back at his apartment.

Q. Did the defendant say anything about a diplomatic passport at the residence?

Q. What did he say about that?

A. He indicated that he had retained a diplomatic passport from his time at the CIA that he had not returned that was inside of his residence.

Schulte accompanied the FBI back to the apartment, let them in, hung around for a bit, then returned to Bloomberg, staying longer than he told them he would.

While he was at Bloomberg, FBI got far enough in their search of Schulte’s apartment to determine that the diplomatic passport was not there.

Q. You testified that the defendant told you that that diplomatic passport was in his apartment; is that correct?

Q. Was the diplomatic passport found in his apartment?

When Schulte didn’t return when he said he would, Evanchec intercepted Schulte again as he was about to leave Bloomberg. The 302 redacts the reference to the FBI telling him they did not find his diplomatic passport at the apartment. 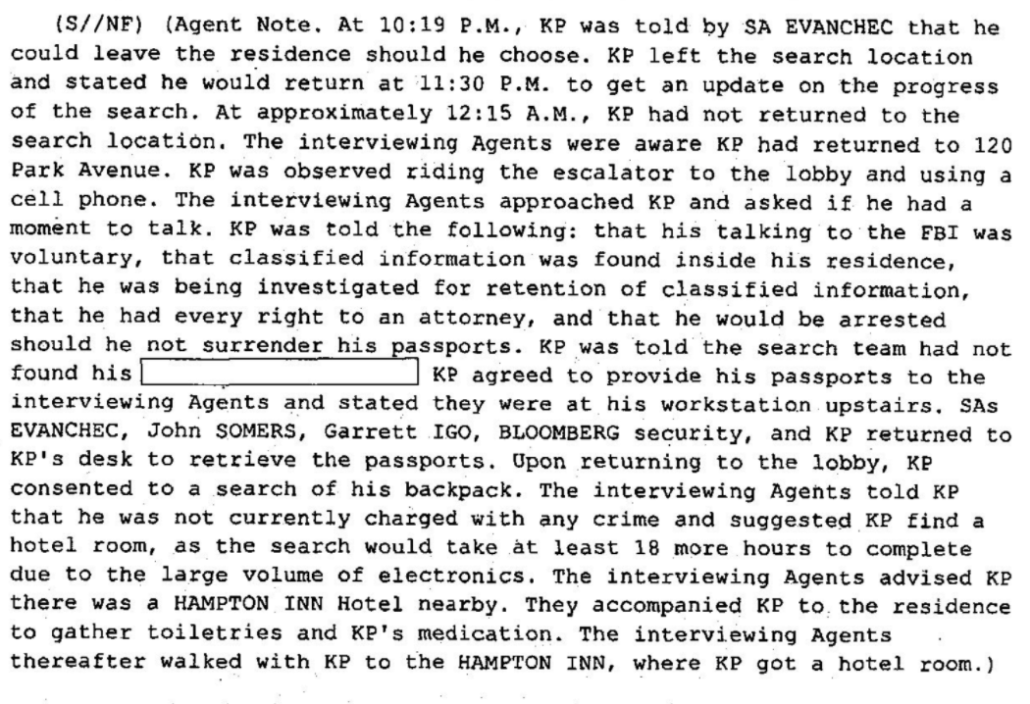 As Evanchec testified, when they intercepted Schulte on his way out, he admitted that he had stashed his diplo passport at his work station at Bloomberg, and they all went to his workstation and got both passports.

A. I believe it was just after midnight, around 12:15 p.m. We observed him again in the lobby of the Bloomberg building at 120 Park Avenue.

Q. Did you approach him?

Q. Who was with you at that time?

Q. What, if anything, did you say to the defendant at that time?

Q. What, if anything, did the defendant say in response?

A. He indicated the diplomatic passport was actually in his office at Bloomberg.

Q. Did he go anywhere after that?

A. Yes, he escorted us along with a security official from Bloomberg to his desk where we took possession of the diplomatic passport.

Q. Did you take possession of any other passport at that time?

A. His personal passport.

Now, virtually all of this has previously been made public (presumably, Evanchec reviewed the 302s before testifying at the trial).

What’s new is that, at least per Schulte, he went home in the middle of the day to get his passport(s). His excuse for doing so might make sense — he was trying to check in online, which you can only do a day in advance. He might have been able to check in from his house, at lunch, unless he tried and discovered he could only check in 24-hours before his flight (he was scheduled to leave work before the end of the day on March 16).

Except none of that would require Schulte to bring two passports back to work, his regular passport and his diplomatic passport (the latter of which he should have but did not turn in when he left the CIA the previous November). Indeed, given the scrutiny Schulte had to have known he would be under, flying under the diplo passport would provoke alarm all by itself, so presumably he was checking in with his regular passport.

What I find particularly interesting, however, is the timing.

That’s because sometime between 10:50 AM and 3:30 PM that same day, Trump said the following in a recorded interview with Tucker Carlson, leaking classified information that would have alerted Schulte, if he had a way to hear it, that the government had determined that “a lot of things were taken” from the CIA under Obama, not under Trump.

If Schulte had some way of seeing this, then, he would have been alerted that FBI had learned enough to know that he was a likely culprit for the leak.

For what it’s worth, it doesn’t seem possible that Schulte would have gotten advance notice he was the suspect for the leak from Trump’s blabbing to Tucker Carlson. I’ve not found any evidence that that interview played live; rather, it appears to have first aired at 9PM, by which point Schulte would have already been intercepted by FBI Agents in the Bloomberg lobby as he left from work.

But the 302 shows that, at around the same time that Trump was blabbing non-public details of the investigation into Schulte to a cable TV personality, Schulte left work and got his passport, possibly even the diplomatic passport he shouldn’t have had.