Like Joe Biggs, the Hughes Brothers Also Conducted a Pincer from the East

There’s a slightly interesting detail in the government’s opposition to Jerod Wade Hughes’ bid to relax his release conditions (in part, to ditch his location monitor) submitted last week. Like Joe Biggs, he was among the first people to enter the Capitol, but then left, walked around the outside, and reentered via the East door right next to the Oath Keeper stack.

Jerod and his brother Joshua Calvin Hughes were arrested in January a few weeks after they identified their own Be On the Lookout pictures to the FBI. They entered the Capitol just after Dominic Pezzola broke open the window. 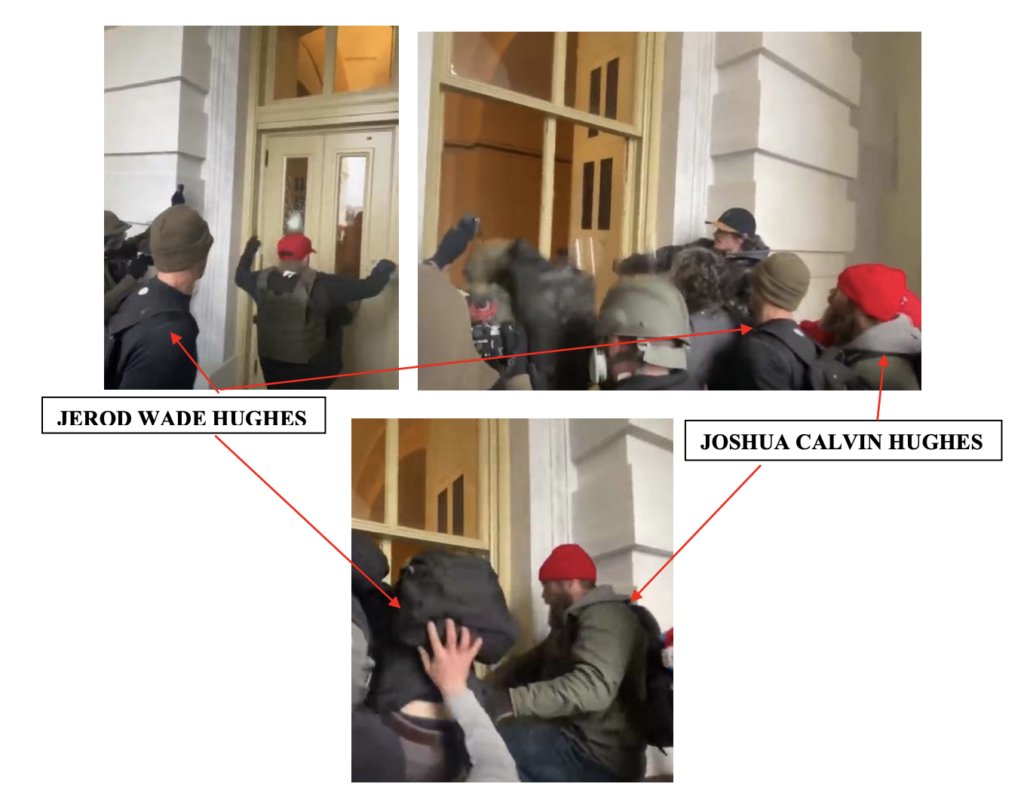 Jerod then kicked open the door from the inside, allegedly doing more than $1,000 in damage (and so vastly increasing his potential criminal exposure).

The Hughes brothers were then both part of the confrontation that Officer Eugene Goodman lured them into.

Their original January arrest affidavit explained that they “found their way” to the Senate floor.

Upon leaving the atrium, JOSHUA CALVIN HUGHES and JEROD WADE HUGHES found their way onto the Senate floor – which had since been evacuated while this confrontation took place. While on the Senate floor, JOSHUA CALVIN HUGHES, JEROD WADE HUGHES, and other rioters sat in Senators’ chairs, opened Senators’ desks, and reviewed sensitive material stored therein.

An unsuccessful March bid to revoke Jerod’s pretrial release likewise described only that the brothers had made their way to the Senate floor, not how they got there.

Upon leaving the atrium, Defendant JEROD WADE HUGHES and JOSHUA CALVIN HUGHES found their way onto the Senate floor – which had since been evacuated while this confrontation took place.

In April, prosecutors cited texts obtained by exploiting Jerod’s phone suggesting that they had breached the building twice.

Person Four told Defendant that the news coverage suggested that Chansley led rioters into the Capitol, to which Defendant responded “He might have been involved in the front door breach. Didn’t see him when we breached the first time.” Whether or not Defendant re-entered the Capitol as he suggested to Person Four, he did have an image on his phone of he and co-Defendant Joshua Hughes in the senate gallery – indicating that their activity in the Capitol was more extensive than Defendant suggests.

The response submitted last week describes that after leaving the Capitol after the Goodman confrontation, the Hughes brothers (like Biggs) walked around the Capitol only to be among the mob that pushed through on the East side.

The defendant then left the Capitol Building through the northeast Senate Carriage door at approximately 2:18 p.m. As he left the U.S. Capitol building, the defendant likely witnessed several U.S. Capitol Police officers being assaulted by rioters.2

Despite having already been instructed to leave the Capitol building, the defendant instead ignored officer commands and re-entered the Capitol Building through the East Rotunda Door at approximately 2:40 p.m. As he re-entered, the defendant rubbed shoulders with U.S. Capitol Police officers who were actively working to shut the doors that had been broken open by rioters only moments prior.

Prosecutors make no mention of the Oath Keepers (or Biggs), but the image included shows Jerod entered along with the tail end of The Stack.

It’s only at that point that the Hughes brothers went (like Biggs) first to the Senate gallery and then from there to ransack desks on the Senate floor.

The defendant proceeded up the stairs to the third floor of the U.S. Capitol building, where he entered the Senate gallery. He then traveled back downstairs and walked on to the Senate floor, where he remained for approximately two minutes. The defendant eventually left the Capitol Building through the northeast Senate Carriage Door – the same door from which he had previously been ordered to leave – at approximately 2:51 p.m., nearly 40 minutes after he first entered the building.

Months ago, I argued that the QAnoners had the most success at placing bodies where they mattered. But with this new detail of the Hughes’ actions, they appear not only to have matched the QAnon success, but to have done so in concert with two separate organized militias.