As I noted in this post, Zach Rehl got me to look closer at BuzzFeed’s story liberating the Capitol Police permits for the events on January 6 (even if, after he discovered my own post, he didn’t give me credit in his follow-up). The most important point in Jason Leopold’s story on the permits is that Ali Alexander’s associates used some front organizations to hide that a series of permits were actually all for the Stop the Steal rally.

But Leopold also got one of those people fronting for Alexander, Nathan Martin, to confirm that no one ever used the stage set up in conjunction with the permit.

The One Nation Under God demonstration was scheduled to begin at 9 a.m. near Constitution Avenue NE and First Street. A stage, podium, and sound system were set up. But Martin said they were never used.

That’s important because of what Alex Jones told a group of more than 50 people (the limit on the permit obtained by a front for Alexander) to get them to go to the East side of the building, while Alexander was standing just a few feet behind him. The idea, per Jones, was that they would all go to the other side of the building where they had a stage and a permit so as to avoid any confrontation with the police. (h/t KarmaOneSixOne for alerting me to this video)

You guys are great. But the police — provocateurs have caused a problem.

These are the comments that got people like John and Stacie Getsinger to go to the East side of the Capitol, leading them to believe that if they followed Jones, they would get to hear Trump speak again. 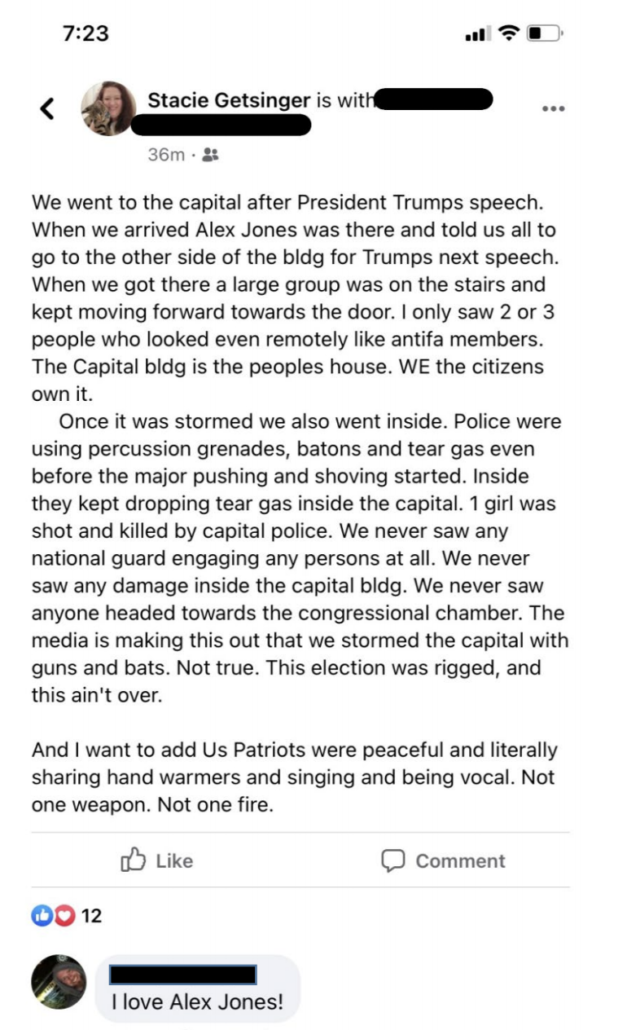 Only, Jones didn’t go to the permitted stage. Instead, he walked right up the East steps, stack-style, with boom mikes and people chanting QAnon slogans around him. Some of the Oath Keepers were already waiting, Jones’ former employee Biggs was either there or on his way, and shortly after Biggs arrived, someone would come from inside and open those doors, only to have a Stack ready to help push through and keep those doors open. (h/t @gal_suburban who shared this video)

Right in the Stack with Jones was Alexander, the guy who had used several front organizations to obtain a permit for a stage where he could have legally protested but, in doing so, would have assembled the crowd some distance away from the Capitol rather than right at its doors.

The stage and the permit were the excuse that Jones used to move a mob to the East side of the Capitol.

But the East stairs are where he led them.