What is the appropriate sanction for a “pawn” who participated in a coup attempt? 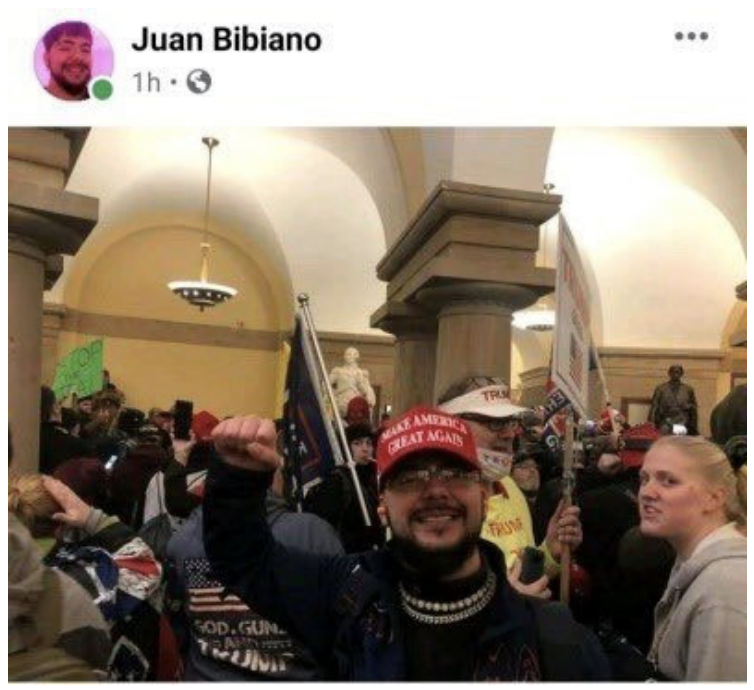 One thing I informally track in January 6 guilty pleas is education level. At the beginning of most change of plea hearings, as part of an effort to substantiate competence to plead guilty, most judges ask, “How far did you go in school?” I first started to take note when Oath Keeper Graydon Young replied that he has a graduate degree. He’s a dramatic outlier. Since then, my very informal tracking of this detail has shown that very very few of the January 6 defendants who’ve pled guilty so far have a four year degree (others who do include but are not limited to Cleveland Meredith Jr, Jenna Ryan, and Andrew Ericson, the latter of whom finished a CompSci degree since the riot).

I track this demographic not out of intellectual snobbery. I know of some absolutely brilliant people who didn’t finish school (a close family member has been very successful without finishing college, and a good number of the smartest students in the 600 student high school class of which I was valedictorian dropped out short of graduation).

Rather, it’s that based on this unscientific observation, the January 6 defendants who’ve pled guilty are, demographically, dramatically less likely to have a four-year degree than the US population, closer to 10% (perhaps 8 of the 96 people who’ve pled guilty) than the 36% that one might expect of the population more broadly. To be sure, this is not scientific. At least two DC judges don’t ask this question, and my count reflects only those hearings where I was personally listening or another journalist who has become aware of my focus on it has noted it. Plus, there may be reasons why people with less education plead guilty earlier, such as that more of them make up those charged with misdemeanor trespassing. But even Brandon Straka, one of the leaders of the larger Trump movement, described that he went through 12th grade and then got a vocational degree at his change of plea.

January 6 defendants seem disproportionately white and rural, but they also appear to be less educated than the country as a whole, even those who’ve had a good deal of financial success.

I raise all that as background to the sentencing memo for Jack Griffith submitted overnight by Heather Shaner, the same defense attorney who convinced Anna Morgan-Lloyd to do some book reports before sentencing (after which Morgan-Lloyd went straight to Fox News to disclaim her stated remorse).

Griffith pled guilty to one count of 40 U.S.C. § 5104(e)(2)(G): Parading, Demonstrating, or Picketing in the Capitol Building. As explained below, a custodial sentence is appropriate in this case because Griffith committed his January 6th crime in a manner that trivialized the severity  of the chaotic and dangerous attack, and his later self-promotion and commentary about his participation in the riot demonstrates continued pride in his actions. Griffith had many opportunities to remove himself from the disorder of January 6th but was all too happy to continue his participation. Following his arrest, his casual attitude toward these criminal proceedings demonstrated a lack of respect for this Court—worrying only that he did not want to appear too “cocky” that it was all going to go well for him. By minimizing the seriousness of his conduct, Griffith fails to recognize the harm he caused to his country, the law enforcement officers who were trying to defend it, and others who were working at the Capitol to carry out a Constitutionally mandated process for the peaceful transfer of power

Instead, Shaner focused on what the January 6 riot was, describing it as a coup attempt fomented by people who deliberately manipulated people online.

What occurred on January 6, 2021 was not a naturally developed political protest. It was, I believe, a coup attempt–fomented intentionally by right wing actors who used data mining and psychological manipulation. Vulnerable individuals were identified and persuaded through the internet that it was their patriotic duty to come to Washington to support Trump. In Washington, they were emboldened and ushered down the avenue to “Stop the Steal” and to storm the Capitol.

It is fitting and appropriate to arrest those who participated in the attempted coup. The difficult question is what is the appropriate sanction for a pawn who personally did no physical damage nor assaulted law enforcement– but nonetheless participated in the riot. As Fiona Hill recently stated the “main threats” to democracy come from right-wing actors who are deliberately undermining faith in the “integrity of the election system” and “calling for violence against fellow Americans.” Among the thousands who came to Washington in January and have since been arrested– few among the arrested are the people described by Ambassador Hill. Of the several individuals I have been appointed to represent—none are informed, intentional political actors. Four of the individuals I represent are very young—were heavily reliant on the internet—were uniformed and misinformed. Two individuals suffer from diagnosed mental diseases. The balance of individuals I have come to know and to respect are vulnerable, politically unsophisticated individuals, who are truly confounded by what is happening in our country. Good people with no criminal history—our neighbors– who were fed cynical and dangerous misinformation which destroyed their faith in the integrity of the election system. People who wrongly believed they could save America.

I think Shaner’s description of the event is sound. But I’m not sure she, or anyone, knows the answer to her question: What we do about pawns mobilized for a coup attempt, particularly in the absence of any accountability (yet) for the more powerful coup plotters.

Shaner argues that probation is appropriate for Griffith for two reasons. First, to avoid making a martyr of him.

We should not make pariahs or martyrs of these men and women.

But also to provide a period in which more education can occur.

To save our Union we must be wise. We must be compassionate. We must listen. We must provide the opportunity for the approximately 550 charged misdemeanants to receive more education, and to encourage each of them to study history and to gain civic literacy. Only knowledge—truth based on facts– can foster change. At this critical moment of civil discord and domestic contention –if it is still possible to create a more perfect Union –it must be through education. We cannot force people to learn. But during Probation, we can provide the impetus and the opportunity of continuing education.

This is an argument not about Jack Griffith (and because she’s pitching this to Chief Judge Beryl Howell, who asked with this defendant why DOJ hadn’t charged him more aggressively, it’s unlikely to work). It’s an argument about what the path forward needs to be.

Few people besides Shaner think probation can accomplish what she envisions here (though a three year term of probation will keep defendants supervised and prohibited from owning guns through the next Presidential election). Indeed, the two judges imposing most disparate sentences for trespassers so far, Tanya Chutkan (who has sentenced two trespassers, including Anna Morgan-Lloyd’s buddy, Dona Bissey, to jail terms in the last week), and Trevor McFadden (who has sentenced defendants to far shorter terms of probation than the government asked for, though with extra on top) have come out against probation for these defendants. Chutkan believes Probation is simply too overtaxed to deal with the influx of all these trespassers. McFadden seems to believe what he sees as a debt to society can better be paid through a fine (he imposed the only fine thus far on Danielle Doyle) or community service (which he imposed on Eliel Rosa); McFadden also believes that January 6 defendants are being treated more harshly than other rioters.

Meanwhile, in the case of Robert Reeder, who was first charged with trespassing then, at the last minute, discovered to have assaulted a cop and downplayed that to the FBI, got sentenced to just three months in jail by Thomas Hogan, rather than the six months prosecutors requested rather than charging him with that assault.

I don’t know the answer to Shaner’s question. And I badly wish that Prettyman Courthouse were fully open so I could assume that judges were hashing this out over lunch in their judge’s lunchroom. I know that there are a significant portion of defendants who really were just engaged in the kind of civil disobedience I don’t want criminalized. Though I also know that as DOJ has pushed to move through the misdemeanors and accepted downward pleas from those charged more seriously for a variety of reasons, it has fostered seeming inequities among the growing group of trespassers being sentenced.

Whether or not Shaner is right about Griffith, she’s right about what happened: Coup plotters used conspiracy theories to mobilize thousands, as if in a cult, to storm the Capitol. We need deprogramming as much as we need jail time. And our criminal justice system is probably ill-suited to provide either.