DOD Inspector General released a report yesterday finding there was no evidence of impropriety in the hiring of Michael Ellis as General Counsel, but also suggesting that NSA Director Paul Nakasone was vindicated in his concerns about Ellis’ hiring. DOD IG made those conclusions without succeeding in getting Pat Cipollone — who might know a back story to Ellis’ hiring — to sit for an interview about his role in the process.

As the report lays out, Ellis was one of 29 candidates who were deemed qualified for the position to apply in early 2020. An initial vetting process did not work as one of the participants said it had in the past, partly because of how the panel considered the technical requirements, partly because they did not conduct interviews. But by all accounts Ellis was deemed one of the top seven candidates, and so qualified for the position.

In the next round, just three people were reviewed, including Ellis. Several of the three panel members deemed a different candidate to have had an exceptionally good interview, but all agreed Ellis did quite well and that it was a close decision.

After that DOD General Counsel Paul Ney, who had selection authority, chose Ellis. When asked why he preferred Ellis, he cited Ellis’ more extensive Intelligence Community experience and his experience both on the Hill (where he wrote dodgy reports for Devin Nunes) and in the White House (where he ran interference for Trump), though there’s no evidence Ney understood Ellis’ role on those bodies. Ney told DOD IG that he had several calls with John Eisenberg and one with Pat Cipollone where the lawyers spoke favorably of Ellis during the hiring process, but he did not regard those as being an attempt to pressure him.

The law requires that the NSA Director be consulted in this process. After the decision was made, Nakasone conducted interviews and decided that the same candidate who had had the exceptionally good interview would best manage the 100-person General Counsel department at the NSA. He also shared concerns with Ney about the way that Ellis had done the classification review of John Bolton’s book (probably reflecting that Ellis was pursuing a political objective on that front). Nevertheless, Ney picked Ellis, and after the election, his hiring was announced.

As the transition wore on and Congress got involved, Nakasone raised concerns about whether the Office of Personnel Management had done an adequate review of the hiring of a political appointee. The review is not required (the IG Report recommended that it be required going forward), and was not used with Obama’s General Counsels Raj De and Glenn Gerstell either. On January 15, Nakasone attempted to stall the on-boarding process, citing the OPM review and concerns from Congress. But then Ney got Christopher Miller to order Nakasone to hire Ellis by the end of the following day, which Nakasone did.

After that (but before the inauguration), Nakasone learned of two security incidents involving Ellis, and based on that and the ongoing IG investigation, put the newly hired General Counsel on leave.

The Eisenberg and Cipollone calls

The IG Report considered whether in calls from John Eisenberg and Pat Cipollone, they inappropriately influenced Ney. It credibly shows they did not. That’s true, first of all, because the IG Report makes it clear that Ney had regular interactions with Eisenberg, Ellis, and Cipollone. Ellis’ bosses at the White House wouldn’t have needed to push him — he was a known figure to Ney.

When we asked Mr. Eisenberg about the rationale for his comments to Mr. Ney, he told us,“I would not have been happy with myself if somebody who … works so hard for me, that I … couldn’t be bothered to basically give a recommendation before somebody makes a decision.” Mr. Eisenberg told us, “[T]here’s nothing inappropriate about … somebody from the White House in an appropriate context, providing an evaluation of their employee.”

The IG Report doesn’t describe (and it would be beyond its scope) that Eisenberg played a central role in some key cover-ups for Trump, the most notable of which was Trump’s attempt to coerce election assistance from Ukraine. Ellis was a part of those cover-ups (indeed, that’s arguably what the Bolton classification review was). Eisenberg also played a key role, way back in 2008, in withholding information from FISC for the first programmatic review of PRISM.

Still, the IG Report credibly describes this as the normal kind of comment that a supervisor would make. It’s only important given who the supervisor was and what the supervisor had asked Ellis to do in the past.

I’m rather interested, however, that Cipollone blew off DOD IG’s request for information.

Cipollone had no legal obligation to cooperate, and DOD IG had no legal means to coerce him to do so. But he’s also the kind of person who would know better than to get himself in an interview where he might have to reveal other pertinent details. For whatever reason, he just blew off the request.

In the days after January 6, Ellis was discovered to have two security violations

After determining, credibly, that Ellis was legally hired, DOD IG then considered whether Ellis was legally put on leave as soon as he was hired. The analysis involves the discovery of two security violations on January 7 and January 8, as laid out in this table. 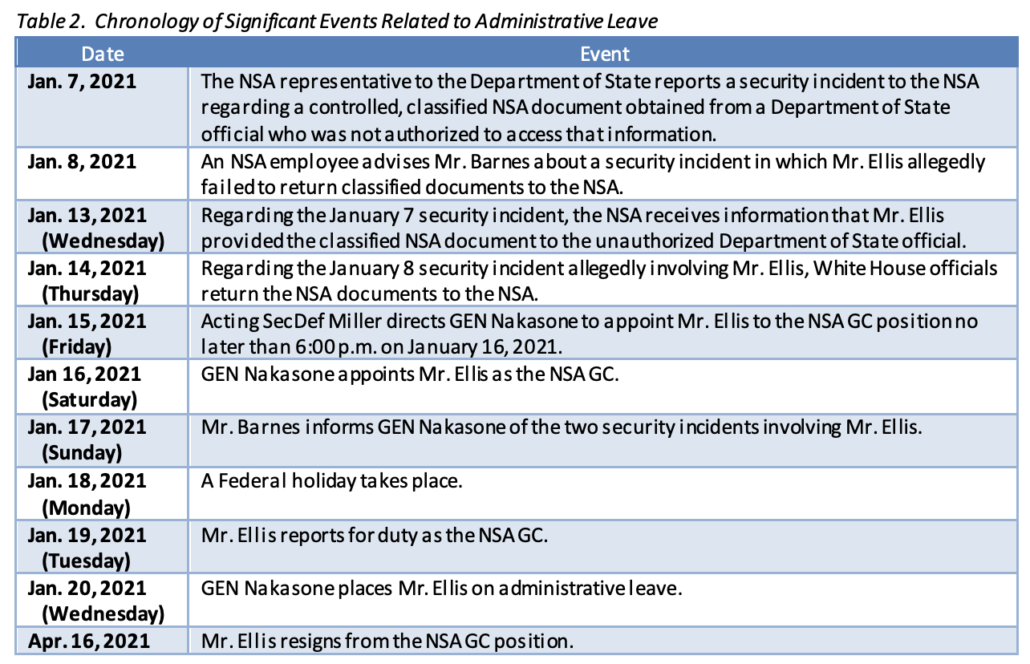 In the first incident, NSA discovered that Ellis had put together and shared notebooks of documents of “compartmented, classified [NSA] information” without NSA knowledge or consent.

An NSA employee received a controlled, classified NSA notebook of documents on January 7, 2021, from a Department of State official who was not authorized to access that information. An initial NSA review further found that several copies of the notebook had been produced without NSA authorization. This event raised concerns that other individuals possessed copies of these sensitive materials without NSA authorization.

[NSA Deputy Director George] Barnes told us that “[they] were spending the last week or so of the administration trying to find out who had them, where they were, and trying to get them back into positive control before the administration members left.” NSA officials received information on January 13, 2021, that Mr. Ellis either created or directed the copying of these notebooks of documents with compartmented, classified information without NSA knowledge, consent, or control.

In the second, more alarming instance, two days after Trump’s coup attempt, an NSA employee tried to retrieve “some of the most sensitive information that NSA possesses” from Ellis, only to discover he was storing it with inadequate security and refusing to return it. (After DDIRNSA Barnes asked for help from Eisenberg, NSA got the information back.)

On January 8, 2021, an NSA employee tried to retrieve an NSA document from Mr. Ellis that contained information of a classified, controlled, compartmented NSA program “of some of the most sensitive information that NSA possesses.” Mr. Barnes told us that Mr. Ellis refused to return the document, retained it for the White House archives, and, based on what the NSA employee saw, placed the document in a container that did not meet the security storage requirements for such a sensitive program. Mr. Barnes told us that he contacted Mr. Eisenberg on January 9, 2021, for help obtaining the document, and the document was returned to the NSA on January 14, 2021. Mr. Barnes said, “The White House people were all leaving so every day new members were leaving and so we were prioritizing on identifying our documents that needed to be brought under positive control and accounted for.” Mr. Barnes added:

And then we started to get the pressure on the 15th is when Acting SecDef ordered us to issue a job offer to him. And so, in that intervening several days, all’s we knew his [sic]is we have a problem, we have to investigate the nature of how these documents were handled, distributed outside of our purview and control. And so that was—the flares were up but we didn’t have time to actually do anything yet and Mr. Ellis was not our employee so we didn’t have a chance to contact him yet for questioning for anything. We had to get security involved to do it right whenever we do an investigation because we didn’t know if there was a disconnect or an understanding that so these were just—the flares went up on the 7th and the 8th.

Effectively, at a time when NSA was trying to ensure that outgoing Trump officials didn’t walk out with NSA’s crown jewels, they learned that Ellis wanted to keep the crown jewels on White House servers.

Importantly, two aspects of these violations repeat earlier concerns about Ellis’ tenure: He shared information with people (like Nunes) not authorized to have it, and that he and Eisenberg played games with White House servers to avoid accountability. And while it’s not clear why Ellis was violating NSA’s security rules, it does seem of a part of his efforts to politicize classification with the John Bolton review.

The investigation into Ellis’ security violations appears to have ended when he resigned in April. The IG Report includes a recommendation that it be reconsidered.

The Office of the Undersecretary of Defense for Intelligence and Security should review the allegation and supporting material that Mr. Ellis improperly handled classified information on two occasions to determine what, if any, further actions the NSA or another agency should take regarding this allegation.

It’s possible, though, that this investigation didn’t go further for a different reason. That’s because the President is ultimately the Original Classification Authority for the entire US government. If Ellis was distributing these notebooks and withholding the NSA crown jewels based on Trump’s authorization, it wouldn’t be a violation at all.

That said, that seems reason enough to chase down why he did those things.

tweets from our circle
emptywheel@emptywheelFor those interested in the TECHNICAL aspects of the Sussmann trial, I'm trying to stick the most informative mater… twitter.com/i/web/status/1…1 hour ago24 May 2022
bmaz@bmazWho? Source: Commanders spend $100M on Va. land espn.com/nfl/story/_/id…8 hours ago24 May 2022
bmaz@bmazRT @LemonSlayerUS: @MatorinLaw @bmaz @MrKovalenko @SecDef Better than getting this promotion.👇 pic.twitter.com/pVxEw8lnlg9 hours ago24 May 2022
Jim White@JimWhiteGNVRT @bettycrackerfl: I’d like a full accounting of how much FL taxpayers have paid to lawyers defending the shoddy work products signed by @…10 hours ago23 May 2022
Ed Walker 🍞🌹💉💉@MasaccioEWRT @RedEyedDespair: Damn that's crazy, why aren't you fighting for healthcare then twitter.com/TheDemocrats/s…14 hours ago23 May 2022
Ed Walker 🍞🌹💉💉@MasaccioEWRT @tribelaw: Alito’s Five Fallacies: 1. Women’s lives won’t be turned upside down 2. We are just returning this issue to the states 3. “On…16 hours ago23 May 2022
Ed Walker 🍞🌹💉💉@MasaccioEWRT @josefmtz: this paragraph is brutal. we truly are in an “emperor has no clothes” point in history pic.twitter.com/XWhBwdMdH316 hours ago23 May 2022
RayneToday@raynetodayLOL Perhaps the mythical "single server" the right-wing wanted turned over after the DNC was hacked already resides… twitter.com/i/web/status/1…2 days ago22 May 2022
RayneToday@raynetodayRT @darth: i know this is completely unrelated but imagine spending nine fuckin hours with that guy3 days ago21 May 2022
RayneToday@raynetodayRT @wyatt_privilege: Not a mind blowing observation but the game now is to send crazy shit upstairs to scotus and invite them to remold, sc…5 days ago19 May 2022

Why I’m Angry At David Brooks DOJ Claims Ryan Samsel Wants to Move Back to Where He Was Brutally Assaulte...