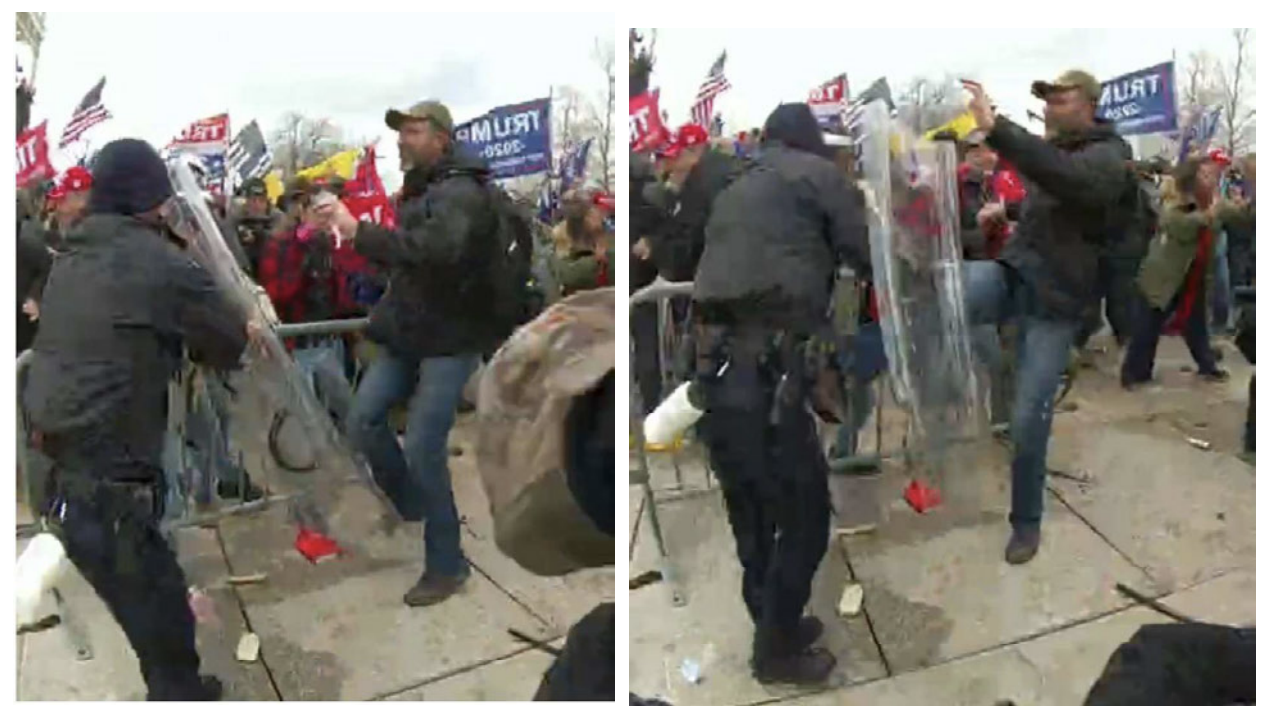 Yesterday, DOJ charged Kevin Douglas Creek with one count of assault. The charge adds to the evidence that DOJ is letting cooperative defendants plead down without entering into a cooperation agreement.

Creek — a former Marine from Georgia — was first charged with assault of what his arrest affidavit called, “multiple officers,” and civil disorder. One of those alleged assaults included kicking a cop. 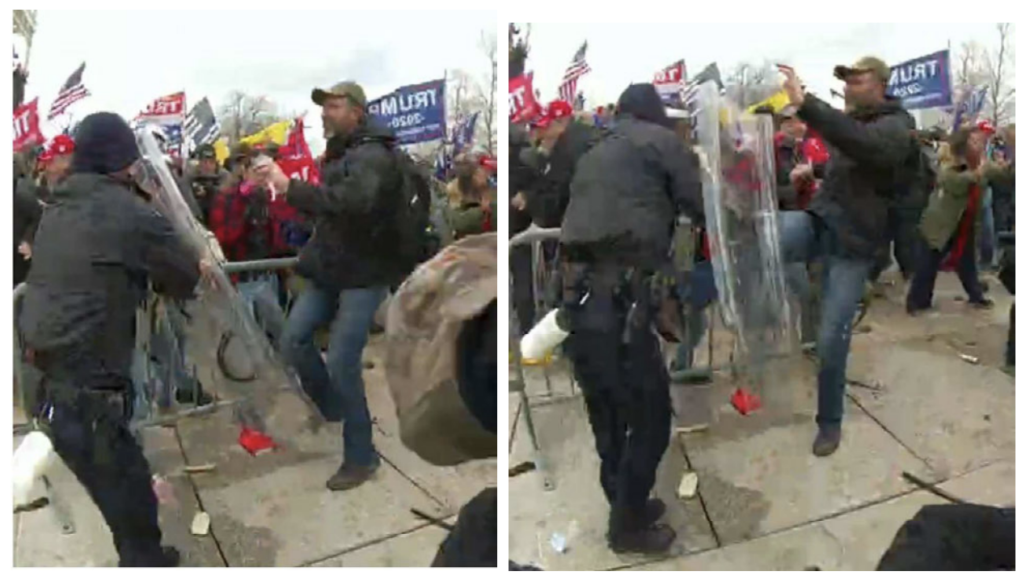 As the arrest affidavit describes (and I wrote up here), the first tip against Creek came from a hospital worker who described that he admitted his involvement in the riot when getting treated at a hospital for delayed effects from tear gas.

On January 10, 2021, a complainant reported to the FBI that on January 9, 2021 or January 10, 2021, an individual named Kevin Creek made comments while visiting Northside Forsyth Hospital about his involvement at the U.S. Capitol riot on January 6, 2021. Creek disclosed that he was tear gassed at the Capitol on January 6, 2021. Creek discussed running up the stairs of the Capitol building and attempting to get inside. Creek talked about having trouble at the door he ran to because the police were gassing individuals at his door. Creek also mentioned he was bruised from his activity at the Capitol and admitted to a long car ride to get to DC. Creek made general comments regarding always being armed but did not directly say whether he was armed at the Capitol.

Later on, the FBI released Be on the Lookout photos for Creek.

In an FBI interview with counsel on May 21, Creek seemed evasive about how he first learned about the protest and described only partly regretting his conduct at the riot.

When asked if Creek regretted his conduct on January 6th, he responded: “50/50”.

Creek was arrested on June 9. After he was jailed for five days, the US Attorney’s Office in Northern Georgia successfully got Creek detained pretrial; the magistrate’s order finding for detention emphasized that he had “assaulted several Capitol Police officers.”

Based on the defendant’s law-abiding conduct after January 6th, his lack of criminal history, and his significant cooperation with law enforcement, the United States submits its position that conditions can be fashioned to reasonably assure the defendant’s appearance and effectively assure the safety of the community. [my emphasis]

In a hearing, it became clear that DC’s US Attorney’s office was saying Creek should be released while Northern Georgia’s was trying to enforce their District policy that those who assault law enforcement are presumptively detained (Northern Georgia would later try to override the release conditions of one of the few Black January 6 defendants, Antionne Brodnax, who moved into the District).

The thing is, there’s no sign yet of Creek’s, “significant cooperation with law enforcement.” His arrest affidavit makes it clear he went to insurrection with three others, two of whom remained with him until after 4PM.

Travel records obtained from Washington Metropolitan Area Transit Authority confirm that on January 6, 2021 at 8:15am, Creek’s credit card was used to purchase four metro cards. These metro cards were used to traveled from Rosslyn Station McPherson Sq Station at approximately 8:17 am. At 11:07 am, one metro card was used to return to Rosslyn Station from McPherson Station. The other 3 cards returned from Arch-Navy Memorial Station to Rosslyn Station at 4:37 pm. Arch-Navy Memorial Station is located about .8 miles to the U.S. Capitol.

But I’m not aware of any arrests of other people from the Atlanta area who might have traveled with Creek.

His discovery lists the body worn cameras of three officers, including Daniel Hodges.

In short, from early on, DOJ said he had provided “substantial cooperation,” using the word — substantial — usually reserved for 5K letters after a defendant has successfully completed the terms of cooperation agreement. And now, four months after his arrest, his assaults on “multiple officers” have been charged as a assault, presumably setting up a plea hearing (while I assume it’s just a coincidence, his next scheduled hearing date, December 17, is the same date as the coordinated status date for the Oath Keeper cooperators).

It’s not clear what to make of this charging decision. But the discussion around Creek’s pre-trial release seems to suggest cooperation that may explain similarly situated January 6 defendants are being charged with multiple felonies and Creek will presumably plead to a single count.

But this charging decision will have one other effect: Those, like David Judd, who claim only Portland defendants charged with assaulting cops get charges dismissed will now have to explain why a January 6 defendant who traveled across three states to attend the Trump riot will likewise have his civil disorder charge dropped.

Update: This post has been substantially corrected to reflect that this appears to be a felony. Creek was charged by information, but the charge includes physical contact that makes it a felony.

tweets from our circle
emptywheel@emptywheelFor those asking about Durham's attempt to coerce Eric Lichtblau, here's my latest post on it. emptywheel.net/2022/05/20/bri…5 minutes ago20 May 2022
bmaz@bmazLAPD protecting and serving: twitter.com/LAcrimes/statu…25 minutes ago20 May 2022
bmaz@bmazThis is an almost insane waste of time by the 1/6 Committee. Barr was not around right before and after 1/6, and he… twitter.com/i/web/status/1…31 minutes ago20 May 2022
Ed Walker 🍞🌹💉💉@MasaccioEWRT @LCVoters: Henry Cuellar is Big Oil's best friend, taking almost $200,000 from them in the 2022 election cycle alone. @JCisnerosTX wil…1 hour ago20 May 2022
Jim White@JimWhiteGNVSays the man who just disenfranchised many voters of color. Just fuck off with your hypocrisy. twitter.com/GovRonDeSantis…5 hours ago20 May 2022
RayneToday@raynetodayRT @wyatt_privilege: Not a mind blowing observation but the game now is to send crazy shit upstairs to scotus and invite them to remold, sc…2 days ago19 May 2022
RayneToday@raynetoday~ding-ding-ding~ Accurate. twitter.com/robinmarty/sta…2 days ago18 May 2022