[NB: Check the byline, thanks. Update(s) will appear at bottom of this post. /~Rayne]

It’s election day across the country with lots of local and state elections still underway. The race receiving the most national attention is Virginia’s gubernatorial race between Democrat Terry McAuliffe and GOP candidate Glenn Youngkin.

A lot of people are getting themselves worked up right now over what recent polling suggested would be a tight race. I can’t and won’t look; I don’t need more anxiety over the continued Trump effect on governance. Vote count may not be settled tonight if the race is very tight — take a deep breath and look away for a while.

Here, have some fresh bullshit to occupy your wattage.

We need deprogramming so badly in this country when hundreds of people are readily motivated by conspiracy theories to show up and participate in pop-up events over a couple days.

Especially events which are based on the belief a person dead for more than two decades will appear.

REPORT: for @RollingStone I detailed some of what I saw at the QAnon gathering in Dallas where true believers expected for JFK Jr. and JFK Sr. to reveal themselves to the public. That did not happen.

These people actually believe John-John is walking the earth and will run as Trump’s VP in 2024. There’s even a real person who they believe is JFK Jr.; I don’t know why the Kennedy family hasn’t sued this person already to prevent any grifting done in their deceased family member’s name.

These folks are completely out of touch with reality. What can they be made to do with a gentle nudge to their wacky irrational beliefs?

It’s not just the Average Josephine showing up on location to see the second coming of a dead Kennedy scion. It’s members of the media who’ve been permitted into White House pressers tweeting conspiracy theories without any skepticism whatsoever. 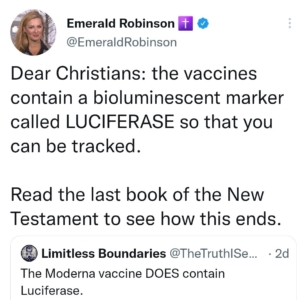 Newsmax’s Emerald Robinson shouldn’t be granted a press pass to federal offices anywhere because she’s got serious issues. This tweet, which was removed as it violated Twitter’s terms of service related to misleading health information, reveals a stunning lack of journalistic acumen. She regurgitated nonsense which had been debunked six months ago without any effort on her part to check it for credibility.

“Critical Race Theory” = dogwhistle to white nationalists who won’t admit on camera they are racist fucks who vote for racist fucks.

Critical race theory isn’t being taught in K-12 public education. At best depending on the state and school district, K-12 students may hear that enslavement of humans is bad and the root cause of the American Civil War. On the worst end of the K-12 education spectrum students may hear bullshit claims that enslaved people were happy being treated like animals without agency and autonomy.

The only people widely teaching critical race theory outside universities are the GOP and talking heads who support them. Instead of explaining to the public the true history of enslaved people in America and the economic impact of slavery as taught in university-level coursework, they tell the public CRT is inverse racism.

As if long-oppressed minority groups have the ability to teach inverse racism when racism by a dominant white class is their lived experience. Rejecting white’s racism while teaching factual history is merely the continuation of America’s decolonization.

Sadly, that brings us back to the race in Virginia, where the nasty old closeted white supremacist above who can’t and won’t explain CRT has voted for the racist GOP gubernatorial candidate.

A racist gubernatorial candidate who may have won his seat as of 8:25 p.m. EDT while I was writing the last of this post, damn it.

Here’s the final piece of bullshit I want to call out RTFN: Do NOT blame progressives for McAuliffe’s loss. Progressives have been busy trying to get Biden’s agenda passed. They are NOT to blame for the piss-ignorant intransigence of West Virginia’s corrupt Joe Manchin and Arizona’s kawaii con artist Kyrsten Sinema.

Old machine Democrats need to look long and hard in the mirror — this includes McAuliffe who went on national TV this weekend instead of pounding the pavement and knocking on doors during that time slot. Hell, why didn’t he attend a Black church in a key district instead of going on that useless Press the Meat with GOP’s buddy Chuck Todd? So many stupid mistakes like that, running a race like it’s 2006.

What other bullshit did you see today which might need deprogramming? Do tell.

Here’s some not-bullshit, a palate cleanser:

Former Obama senate intern Justin Bibb won the Cleveland mayor’s race, replacing term-limited Frank Jackson. Both are Democrats; Bibb is the first new mayor since 2005 and at 34 the second youngest mayor ever.

All four of these new mayors are persons of color and more progressive than the incumbent and opposing candidates. All of these races make the case it’s not progressives who lost the VA governorship.

I may need a celebratory nightcap for that one! As it’s after midnight here and many votes are still being counted in races west of here, I’ll check back in the morning.