Three Things: North by East by Northeast on January 6 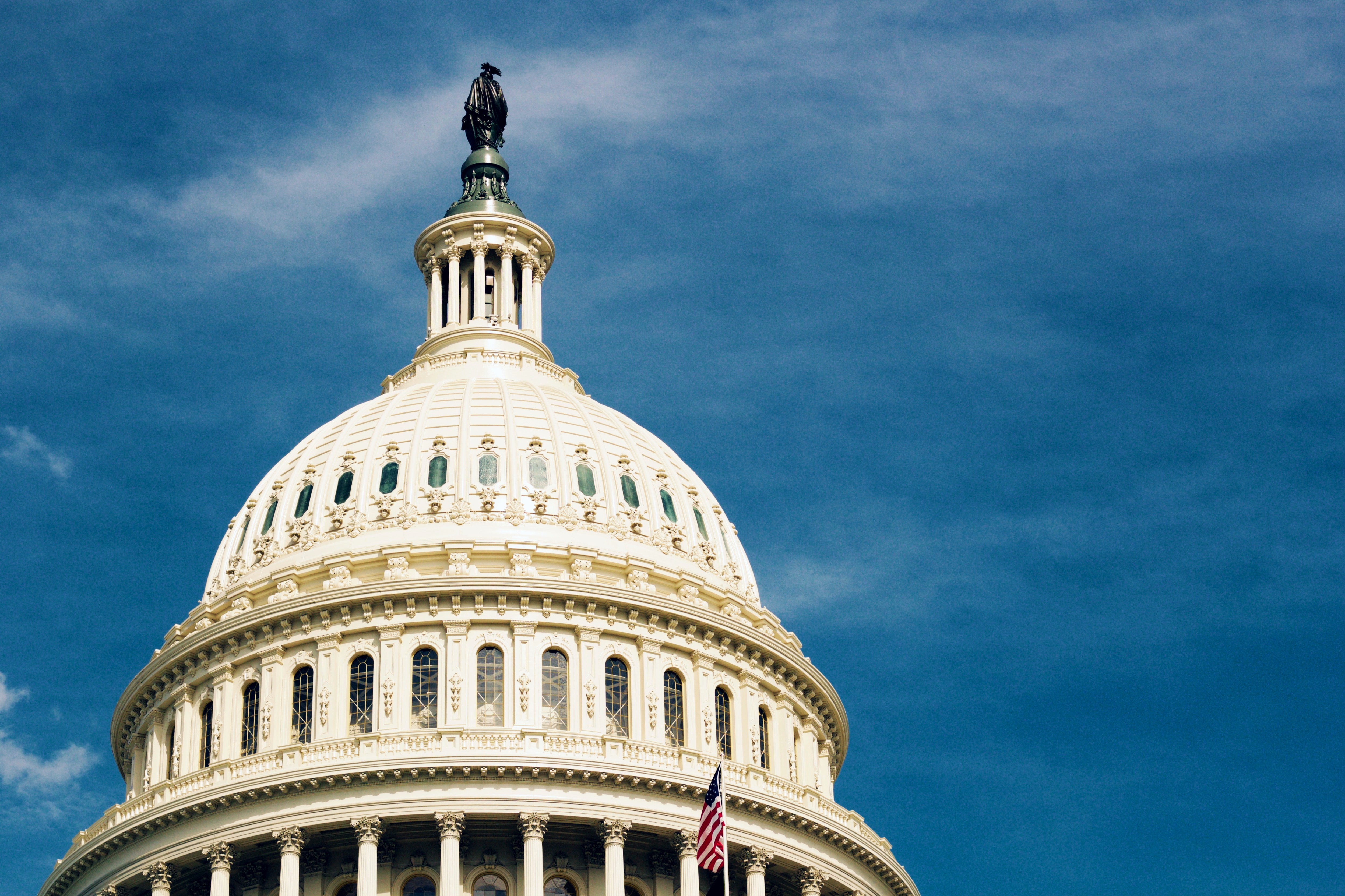 While Marcy has the prosecutions of January 6 perps admirably handled, there are a few things which have niggled at me as the investigations into the insurrection have progressed.

In the early days after the insurrection, a few of the better pieces of reporting looked at the location and timing of the mob. I’d snapped screenshots from one report in particular but I should have done more since the original report no longer contains the key interactive feature without any note it was pulled/killed. I can’t pull up the video any longer from which I pulled this screenshot – here is the original as snapped and an enhanced version tweaked for color balance, gamma, and saturation. 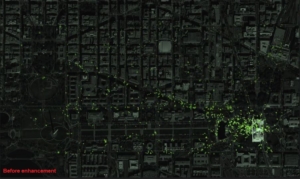 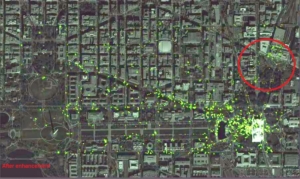 The cluster isn’t highlighted like the mass of rioters who moved from the Ellipse toward the Capitol, but the signatures are dense.

You’ll note the location is at/near Columbus Circle where people will catch transportation, but the cell phone traffic didn’t appear to move toward the circle after the speeches were done at the Ellipse; it was very focused on moving toward the Capitol.

Nor was there cell phone traffic moving toward the Capitol South Station for transportation though the area may have been closed to through traffic.

Who were these people and why were there so many in that one north-northeast location as the Capitol was assaulted? Is there a benign explanation like people waiting for rally/insurrection participants, or is there another explanation?

Dr. Jack Brown, who does body language analysis, performed an analysis of surveillance photos and video which captured the perp who left the improvised explosive devices near the Democratic National Committee building and the Capitol Hill Club on the evening of January 5. It’s worth your time to visit this threaded study.

I can’t help thinking after looking at images and video of the perp that this was a woman wearing shoes which may not have been hers, but perhaps my perception is off.

One really important detail came up in this analysis which I know I’d missed before and perhaps reporters did, too: earlier reporting by multiple media outlets said the second IED had been placed at the RNC building (located at 310 First St SE, Washington, DC), not the Capitol Hill Club (located at 300 First St SE, Washington, DC). What’s the story here? Is it important that the perp targeted the Capitol Hill Club and not the RNC?

One other detail which I don’t recall being reported before the Washington Post’s huge investigative spread was the existence of a third suspicious package which hasn’t been called an IED or bomb, located at the Supreme Court building which is located directly east of the Capitol Building.

The DNC offices are south of the Capitol while the Capitol Hill Club is to the southeast. Had the IEDs at these sites detonated, law enforcement (and National Guard if they were summoned) may have swarmed to the location of the IEDs. If the suspicious material at the Supreme Court building was an IED, that would also have drawn first response personnel away from the Capitol. All three combined would have left the east side of the Capitol even more lightly defended than it was.

Not to mention the chaos such blasts would have created among mob members who weren’t in on a possible conspiracy behind the bombs.

All of which makes the congregated cell phone signatures to the northeast of the Capitol Building off First Street more intriguing.

Long-time emptywheel community member harpie has done yeoman’s work pulling together timeline content related to January 6 events. In a comment last night she pointed to the parking place of Alabaman Lonnie Coffman who has accepted a plea agreement related to a 17-count indictment related to weapons and explosives found in his pickup truck on January 6.

You may recall the truck had guns and Molotov cocktails in it. Reporting mentioned that the truck was found during a search around the area where the IEDs had been found:

… According to charging papers, police spotted weapons in his red pickup while searching an area of Capitol Hill that had been sealed off because unexploded pipe bombs had been reported near the headquarters of the Republican and Democratic parties minutes before the mob assault began about 1 p.m. …

The curious thing about this truck which caught my eye was its parked location: 301 First Street SE. That’s between the DNC offices and the Capitol Hill Club as you’ll note on this map: 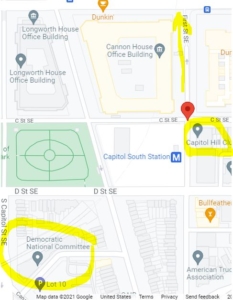 This parking address denoted by the red flag is next to the Capitol Hill Club.

It’s also directly south on First Street from whatever was going on with that cluster of cell phones to the northeast of the Capitol Building.

Coffman’s plea agreement was sealed, by the way:

… In a 24-page decision, Kollar-Kotelly found that sealed government filings and his cache of weapons “convincingly demonstrate[d]” his planned intentions to disrupt Congress in potential coordination with others. The judge did not say that coordination was realized. …

I can’t help wondering if there was a Quick Response Force waiting at Columbus Circle for some triggering event less than a mile south along First Street SE.

Were the Molotov cocktails not meant to be thrown but part of an in-place fiery signal in a sacrificed truck parked between the location of two IEDs? Or were they meant to be used on whomever responded to calls had the IEDs detonated?

It will be a long wait before we find out. Plenty of food for thought in the mean time.

Thanks to harpie for all the bits and pieces!

Gina Bisignano: If a Plea Deal Falls on the Docket and No One Hears It R... The Office of Special Counsel Report on Trumpsters’ Crimes: Toothless,...