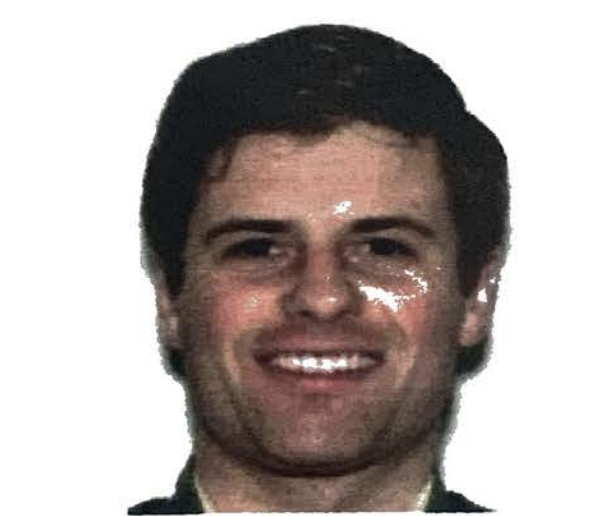 There’s a temporal problem in Project Veritas’ initial motion to appoint a Special Master to sort through materials seized from James O’Keefe in a search on November 6.

In one place, it described that, “At 6:00 AM on Saturday, November 6, 2021, the Federal Bureau of Investigation (“FBI”) executed a search warrant at Mr. O’Keefe’s home.” In another, it described that, “On November 5, 2021, at approximately 6:00 AM, the FBI executed search warrants at the homes of two former Project Veritas journalists, seizing their cell phones and other electronic devices.” But the very next paragraph describes that the O’Keefe search happened two days after the initial search: “Approximately two days later, the FBI executed a search warrant at the home of James O’Keefe.” Then, the letter describes that, “on November 4, 2021 – two days before its search of Mr. O’Keefe’s home — the undersigned had accepted service of a grand jury subpoena directed to Project Veritas.” Shortly thereafter, the letter says the earlier search happened on November 4, not November 5. “On November 4, 2021, at about the same time that FBI agents finished searching the home of a former Project Veritas journalist.”

Even while incorrectly stating that the initial search happened on November 5, the filing (and a subsequent one) don’t describe precisely when NYT’s Mike Schmidt twice reached out for comment about the searches, a key part of their obviously false narrative that Schmidt had to have gotten tipped off by the FBI. 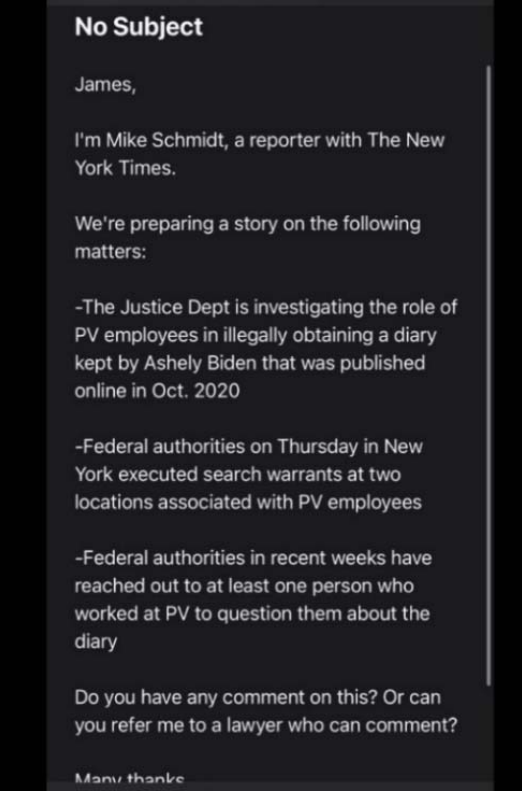 The searches happened on November 4 and 6, at 6AM. I asked Mike Schmidt when he reached out but he didn’t respond, though Eric Cochran’s motion to appoint a Special Master says Schmidt reached out approximately an hour after the 3-hour search happened, so around 10AM.

The incorrect claim in that initial filing that the first searches occurred on November 5 may be nothing more than a typo, but sorting through the timeline alerted me to a chronological detail of some import that PV may want to obscure. PV got word themselves of the investigation, and reached out to one of the prosecutors involved, Mitzi Steiner, to find out more about the investigation on October 26. After Steiner refused to reveal anything about the investigation, lawyers for PV offered to accept a subpoena the next day, promising they had “material and helpful information” to the investigation. But after DOJ sent a subpoena on November 4 — almost certainly after the first searches, which targeted former PV staffers — PV persistently refused to say whether it would comply with the subpoena.

And after PV repeatedly declined to ask for an extension in response to reassurances they would comply with the subpoena, they used the search on O’Keefe as an excuse to try to get such an extension.

Judge Analisa Torres denied PV’s request for an extension, which could have significant repercussions going forward.

There are several implications of this timeline. First, DOJ may believe, with some justification, that by first serving a subpoena on PV in response to their invitation to do so, only to have them equivocate about whether they would comply, they had fulfilled DOJ’s requirements to seek alternative resolutions, short of a search. That is, PV’s own games may have led to the search on O’Keefe.

The other issue is how this affects PV’s ability to claim expansive privilege protections. When PV alerted DOJ that it not only knew of the investigation, but who was leading it, DOJ likely took measures to identify how they had learned of the investigation. That’s a good way to identify attempts to obstruct an investigation. For example, after it became clear that Roger Stone was tampering in the Mueller investigation in 2018, Mueller obtained a pen register to learn with whom, besides Michael Caputo, Stone was communicating. That appears to be what alerted Mueller to how panicked Stone was by the Andrew Miller interview. That, in turn, is something that may have helped them obtain probable cause on the others. In a directly relevant example, for example, DOJ learned that Lev Parnas had deleted his iCloud account, which seems to be one of the things that helped SDNY obtain warrants for Rudy’s cloud-based accounts in 2019. When co-conspirators attempt to coordinate stories or delete evidence, it makes it a lot easier to obtain warrants.

As a result, there may be information pertaining to PV’s involvement in the alleged theft in three different places. First, I would be shocked if SDNY had not obtained the cloud-based communications of O’Keefe, Eric Cochran, and Spencer Meads. That said, DOJ has already indicated that it knows key communications of interest took place on Telegram, and it’s unclear what access DOJ has to that, independent of the phones Telegram texts were sent on. Then there are the contents of their phones, which may (and uncontroversially could) be subjected a Special Master review. If Torres grants PV’s request for a Special Master, it would give PV an opportunity to at least understand what the full legal exposure is. But then there’s the matter of the subpoena. I would be unsurprised if PV filed a challenge to the subpoena, which might go before Chief Judge Laura Taylor Swain rather than Judge Torres, and might be sealed as a grand jury matter. But this is a subpoena they invited, which will make it a lot harder to claim the subpoena was improper.

With Michael Cohen, the government was able to demonstrate during the Special Master review that some of the materials that Cohen might otherwise have tried to claim were privileged were not, in part because they had already seized his cloud communications (including his Trump Organization emails, which were hosted and turned over by Microsoft). Here, if PV responded to the subpoena at all, the government get a privilege log, laying out why PV thinks conversations O’Keefe had with 45 different lawyers were really privileged, thereby committing PV and O’Keefe to the claims they made in a subpoena response (assuming, of course, they don’t buy time by challenging the subpoena).

Whatever the merit — or abuses — of the focus on PV, PV’s games on the subpoena may have made efforts to protect O’Keefe far more difficult. And their game-playing with the subpoena will make it more difficult for other news outlets in the future to have DOJ treat efforts to accommodate reasonable requests in good faith.

It’s a complex issue and we don’t have enough information to know whether DOJ’s case — that PV was involved in the theft of Ashley Biden’s diary itself, and so not protected under any First Amendment precedent that might otherwise be available to them — is solid or if it instead charges them for involvement after the diary was already stolen, the First Amendment standard under Bartnicki which applies to journalists and non-journalists alike. PV is also trying to shield materials — including donor information and claimed attorney-client privileged materials — along with anything purporting to relate to journalism. The seeming desperation to hide donor information (which normally wouldn’t be involved in the scope of such a request) raises real questions about the sincerity of their journalistic claims, particularly given the recent revelation that PV would let donors dictate the timing of PV’s publications. And as DOJ noted in its response to PV’s motion for a Special Master to review the seized material, PV is not trying to protect the identities of its purported (second-hand) sources for the diary, so some protections that might otherwise apply do not here.

It is troubling that DOJ seized records from O’Keefe citing crimes that suggest liability for a crime after the fact, because if PV genuinely was only involved after the fact, it would pose a dangerous precedent for actual journalists. But the games that PV appears to have played with their subpoena dangle — and some changes they’ve already made to their story — suggest there my be more to the story.

October 12: O’Keefe sends email, not mentioning Ashley Biden by name (but clearly referring to her) explaining his decision not to publish “Sting Ray” Story.

National File also knows the reported precise location of the physical diary, and has been told by a whistleblower that there exists an audio recording of Ashley Biden admitting this is her diary.

October 26: Paul Calli call DOJ, asks for AUSA Mitzi Steiner, and asked to speak about the PV investigation; Steiner asked how Calli had obtained her name, what else he had obtained, and declined to speak with Calli.

October 27: Lawyers for Project Veritas inform the DOJ that they will accept service for a subpoena relating to the investigation

November 4, one hour after the search: Mike Schmidt reaches out to Cochran and O’Keefe for comment about the investigation.

November 5: NYT publishes story on investigation including language that PV would later baseless claim had to have come from the FBI.

November 6: Lawyers for Project Veritas ask the FBI to sequester material from the phone.

November 7: DOJ declines PV’s request and states the FBI has complied with all media guidelines.

November 8, 6:11PM: DOJ emails PV and tells them the extraction may start as soon as the next day.

November 10: On behalf of PV, Calli Law moves to appoint a Special Master.

November 11, 12:51-12:53AM: Calli asks for confirmation that DOJ stopped extraction and review on O’Keefe’s phone on November 8.

November 11, 7:57AM: DOJ responds that the substantive review of O’Keefe’s phone was paused upon filing of motion on November 10.

November 12, 3:49PM: Calli asks for clarification on review and extraction.

November 12, 3:59PM: DOJ responds that, “upon the filing of your motion, the Government paused the review of all material obtained from the search of your  client’s residence.”

November 15: DOJ requests permission to reply to PV on November 19.

November 23: Torres denies motion (including from RCFP) to unseal affidavits.

November 24: Meads reply to refusal to unseal affidavits, including letters from House and Senate complaining to DOJ.