The Publisher of the Steele Dossier, Ben Smith, Reports that the Hunter Biden Laptop Was Just a Political Dirty Trick 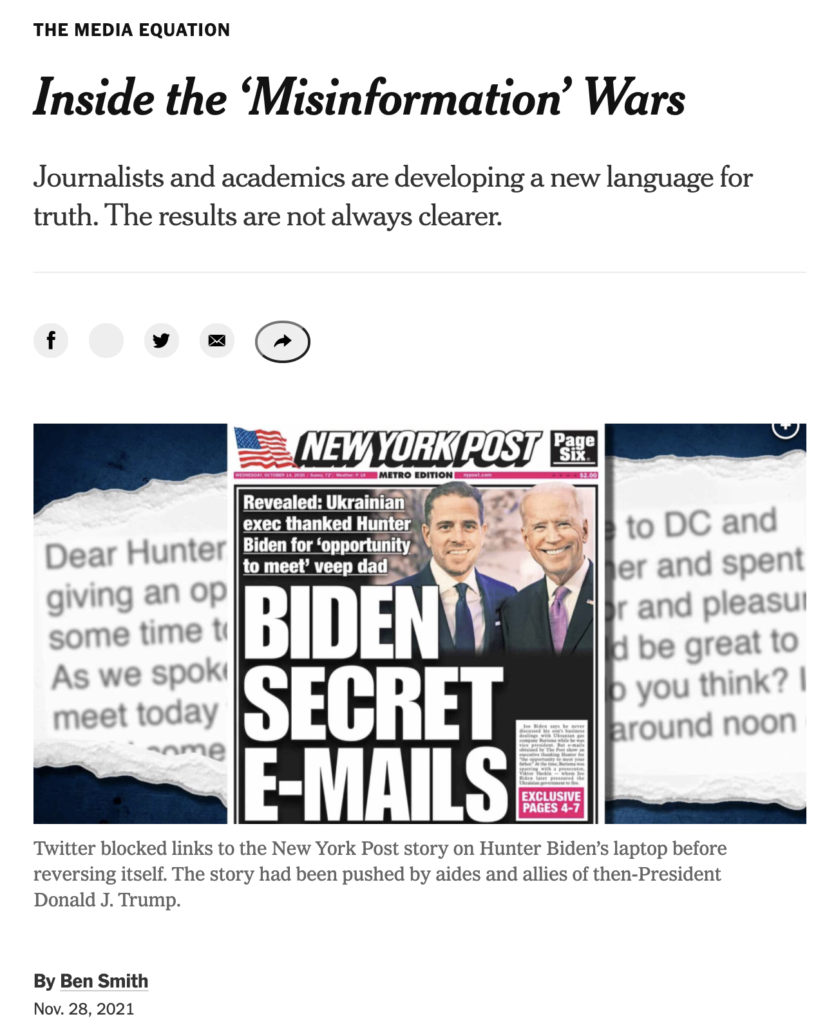 The recent Igor Danchenko indictment and overly credulous reporting on it have created a big new push for former BuzzFeed editor Ben Smith to reflect on his role in the dissemination of the Steele dossier.

In a Sunday column on mis- and disinformation, however, he makes no mention of it.

Instead, his column questions the inclusion of the Hunter Biden laptop story in a media executive seminar on, “help[ing] newsroom leaders fight misinformation and media manipulation.” Smith claims that treatment of the laptop story is, in fact, proof that the term “media manipulation” means  “any attempt to shape news coverage by people whose politics you dislike.”

A couple of them, though, told me they were puzzled by the reading package for the first session.

It consisted of a Harvard case study, which a participant shared with me, examining the coverage of Hunter Biden’s lost laptop in the final days of the 2020 campaign. The story had been pushed by aides and allies of then-President Donald J. Trump who tried to persuade journalists that the hard drive’s contents would reveal the corruption of the father.

The news media’s handling of that narrative provides “an instructive case study on the power of social media and news organizations to mitigate media manipulation campaigns,” according to the Shorenstein Center summary.

The Hunter Biden laptop saga sure is instructive about something. As you may recall, panicked Trump allies frantically dumped its contents onto the internet and into reporters’ inboxes, a trove that apparently included embarrassing images and emails purportedly from the candidate’s son showing that he had tried to trade on the family name. The big social media platforms, primed for a repeat of the WikiLeaks 2016 election shenanigans, reacted forcefully: Twitter blocked links to a New York Post story that tied Joe Biden to the emails without strong evidence (though Twitter quickly reversed that decision) and Facebook limited the spread of the Post story under its own “misinformation” policy.

But as it now appears, the story about the laptop was an old-fashioned, politically motivated dirty tricks campaign, and describing it with the word “misinformation” doesn’t add much to our understanding of what happened. While some of the emails purportedly on the laptop have since been called genuine by at least one recipient, the younger Mr. Biden has said he doesn’t know if the laptop in question was his.

And the “media manipulation campaign” was a threadbare, 11th-hour effort to produce a late-campaign scandal, an attempt at an October Surprise that has been part of nearly every presidential campaign I’ve covered.

The Wall Street Journal, as I reported at the time, looked hard at the story. Unable to prove that Joe Biden had tried, as vice president, to change U.S. policy to enrich a family member, The Journal refused to tell it the way the Trump aides wanted, leaving that spin to the right-wing tabloids. What remained was a murky situation that is hard to call “misinformation,” even if some journalists and academics like the clarity of that label. The Journal’s role was, in fact, a pretty standard journalistic exercise, a blend of fact-finding and the sort of news judgment that has fallen a bit out of favor as journalists have found themselves chasing social media.

While some academics use the term carefully, “misinformation” in the case of the lost laptop was more or less synonymous with “material passed along by Trump aides.” And in that context, the phrase “media manipulation” refers to any attempt to shape news coverage by people whose politics you dislike.

Unless Smith considers the two details he cites — some researchers have confirmed that some of the emails are authentic, yet Hunter Biden doesn’t claim to know whether the laptop in question was his — to be proof one way or another that this was a “politically motivated dirty tricks campaign,” he cites no evidence for his conclusion.

Smith doesn’t mention any of the reasons why there was and remains good reason to suspect the laptop — the provenance of which even Glenn Greenwald once proclaimed to be “bizarre at best” — was more than that. From the time President Trump first started extorting an investigation into the Bidens from Ukraine through at least January 2020, Russia’s military intelligence agency, GRU was found hacking Burisma, the company with which Hunter had a sketchy consulting relationship that was the initial hook for the laptop stories. Rudy Giuliani not only played a central role in the brokering of the laptop story, but reportedly had been sitting on a copy of the files for some time. Rudy, of course, had played a key role in Trump’s attempt to extort news of a Biden investigation and even during the impeachment inquiry, in spite of warnings from the intelligence community, traveled to Ukraine to meet with Andrii Derkach, who was subsequently sanctioned as a Russian agent. According to Ben Smith’s employer, Derkach’s efforts to deal “misleading information” to Rudy as part of a 2020 election operation are under investigation by EDNY; a parallel investigation into Rudy for serving as an unregistered agent of Ukrainian interests in events that were part of the impeachment inquiry remains ongoing at SDNY. 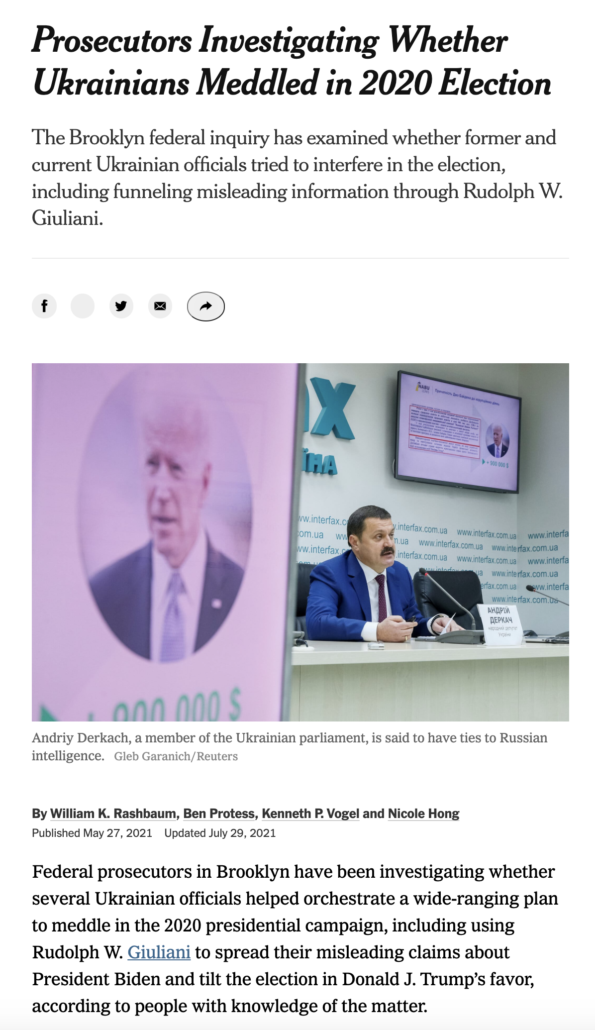 An intelligence report related to the second story hung on the laptop, regarding Hunter’s ties to China, was disclosed to have been attributed to an intelligence analyst whose identity was entirely fabricated, down to his artificially generated face. And the IC’s report on efforts to interfere in the 2020 election includes one conclusion that sounds suspiciously similar to the efforts that led to the laptop story.

A key element of Moscow’s strategy this election cycle was its use of people linked to Russian intelligence to launder influence narratives–including misleading or unsubstantiated allegations against President Biden–through US media organizations, US officials, and prominent US individuals, some of whom were close to former President Trump and his administration.

If the Hunter Biden laptop story was just a political dirty trick, then it was one that exactly paralleled well-substantiated efforts involving Russian intelligence agents.

We now know, thanks to the investigation into Project Veritas, that the “sister” media package right wing propaganda outlets were pitching, the dissemination of a diary from Hunter’s half-sister in the very same weeks leading up to the election, similarly features a sketchy origin story that — SDNY has shown probable cause to believe — actually serves to hide the theft of the underlying diary. While SDNY has not yet charged anyone much less proven the case, it claims that the story about how reporters came to obtain such a juicy campaign prop was, itself, misinformation hiding theft. That’s another detail that Smith doesn’t mention in his piece.

Even if the similarities between Smith’s “old-fashioned, politically motivated dirty tricks campaign” and the acknowledged interference attempt by Russian agents are mere coinkydink, it nevertheless is the case that the Hunter Biden laptop package was an attempt at media manipulation, part of the reason it was presented to the seminar.

That’s because — again, as even Glenn Greenwald acknowledged — the presumptively authentic emails offered as the dangle in the laptop package provided, “no proof that Biden followed through on any of Hunter’s promises to Burisma.” By offering “authentic” emails and derogatory pictures just before the election, right wing operatives attempted to make a story that had long been reported (and key parts of it debunked by experts testifying under oath as part of the first impeachment) go viral just before the election not by offering any proof of the key allegations, but by waving something “authentic” around that could substitute for real proof.

It briefly worked, too, as high profile journalists disseminated the most inflammatory details in the story — effectively delivering the announcement of a criminal investigation pertaining to Ukraine that Trump demanded from Volodymyr Zelenskyy — and only after that started identifying really problematic parts of the story.

This entire episode was an effort to disseminate something “authentic” that nevertheless lacked proof of the underlying allegations as a way to lead people to believe those allegations. Classic media manipulation, and it nearly succeeded.

And Ben Smith, the man who published a dossier full of unproven allegations that — Republicans in Congress now believe — injected Russian disinformation into what otherwise might have been just an “old-fashioned, politically motivated dirty tricks campaign,” a dossier that (like Hunter Biden’s laptop) long stood as the proxy understanding for a criminal investigation into dramatically different facts, dismisses the possibility that it was disinformation blithely, presenting no real evidence for or against.

It is undoubtedly the case that there remain real questions about the Hunter Biden laptop package, questions that may get renewed attention given the new focus on the Ashley Biden diary package. Maybe one day, Ben Smith will be able to state, as fact, that it was just an, “old-fashioned, politically motivated dirty tricks campaign;” or maybe EDNY will uncover the real provenance of those “authentic” files all packaged up and handed to a guy who made no secret of his willingness to accept and disseminate Russian disinformation.

But at a time when he is actively refusing to reflect on his own actions in disseminating an “old-fashioned, politically motivated dirty tricks campaign” that seems to have been exploited as an easy vehicle for hostile disinformation, Ben Smith might want to be a little more cautious about assuming those lines are so easy to distinguish.