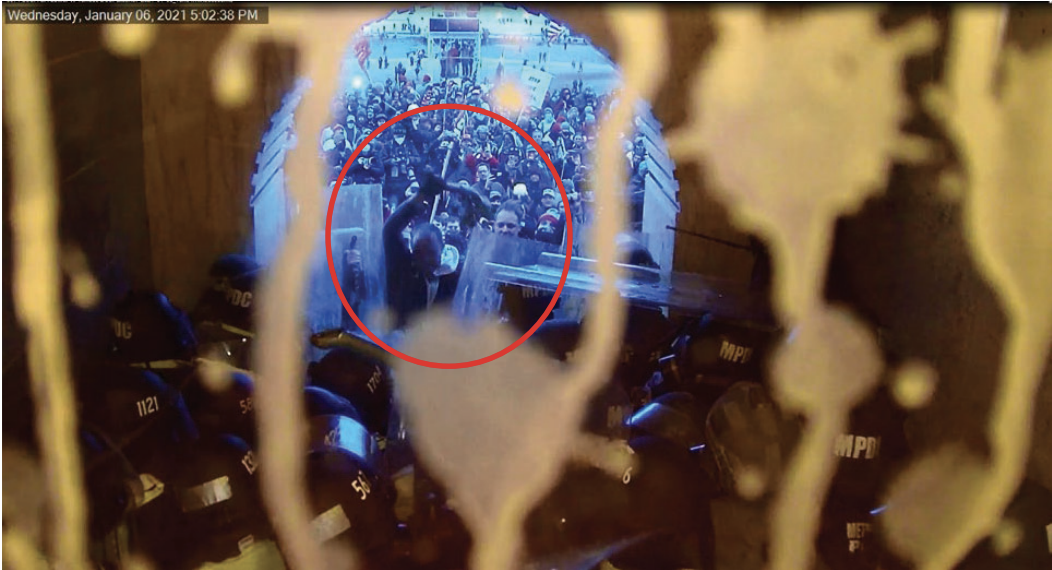 This is a screen cap from the first CCTV video successfully released by a January 6 defendant. 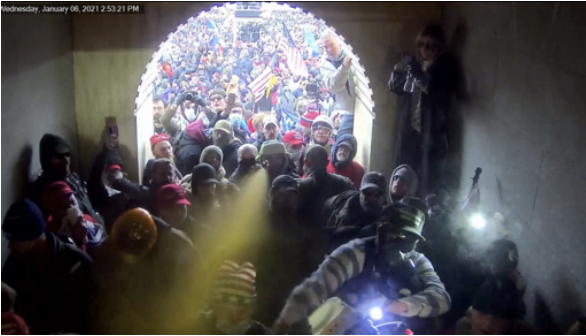 In June, accused assault defendant John Anderson’s attorney, Marina Medvin, argued that Anderson needed the video to show — and argue publicly — that, contrary to showing an older man lunge to the front of violent mob, the video instead showed a man suffering from the effects of tear gas and moving up towards a line of officers to ask for help.

The government’s evidence, instead, shows a man approaching police to seek medcial [sic] attention after being chemically prayed by a member of the crowd and after being subjected to additional chemical spray released into the crowd by law enforcement. The video sought for release, and being blocked by the government, establishes Mr. Anderson’s defense.

Furthermore, the defense should be free to utilize this highly exculpatory short video to defend Mr. Anderson just as the government uses their discretion to publicize videos and screenshots to accuse this defendant, and every other, of very serious crimes. And, Mr. Anderson should be free to utilize CCTV video publicly just as the government has utilized CCTV video publicly to benefit their position in other prosecutions. See discussion infra. The defense should not need to explain how or why we need this evidence when the exculpatory nature of the evidence is clear on its face. The subjection of this 30-second CCTV clip to a Protective Order prejudices the defendant immensely. The government’s position on preventing the release of a 30-second recording is unreasonable and fails to meet the burden that is on the government to prevent release.

The government argued against that release, describing that unnamed people were using the aftermath of the January 6 attack to gather non-public information about the interior of the Capitol to identify vulnerabilities.

The USCP’s concern with release of the footage is based on an awareness of efforts made by individuals, whether participants in the Capitol riots or not, to gather information about the interior of the U.S. Capitol which is generally not publicly available. The USCP is concerned that release of the footage without protection, especially to defendants who have already shown a desire to interfere with the democratic process, will result in the release of information regarding the vulnerabilities and security weaknesses of the U.S. Capitol which could be used in a future attack.

After weeks of litigation, Chief Judge Beryl Howell ordered that the “Highly Sensitive” designation on the video be lifted, freeing Medvin to share the video publicly.

Medvin will never use this video at trial. Anderson is one of the January 6 defendants who passed away since he was charged. Still, the release of that video marked the first step in the subsequent release of far more video of which Capitol Police had initially tried to restrict the widespread release.

This is a screen shot of a video seemingly taken from the same (or an adjacent) camera around 4:20PM on January 6. 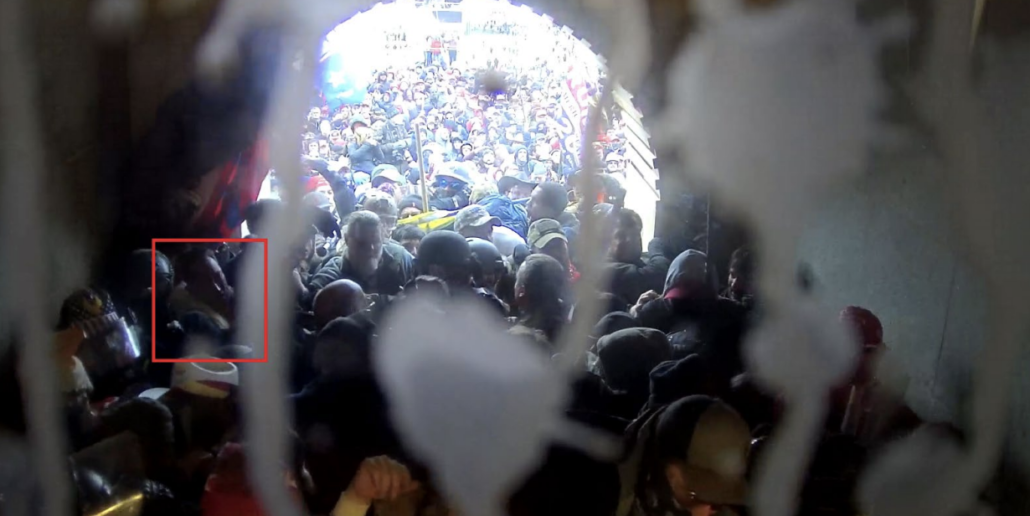 The screen cap appeared in a filing opposing the release of James McGrew. McGrew is accused of “position[ing a] pole [handed to him by another rioter] over his head and launch[ing] the pole into the tunnel” at a line of police officers. While some substance got splattered onto the lens of the camera in the ensuing 87 minutes, the camera still proved useful in identifying participants in the hours-long struggle that it filmed.

The video was released just weeks ago, after Beryl Howell ruled against McGrew’s bail motion on November 2.

This is a screen cap from the same camera taken 32 minutes later. 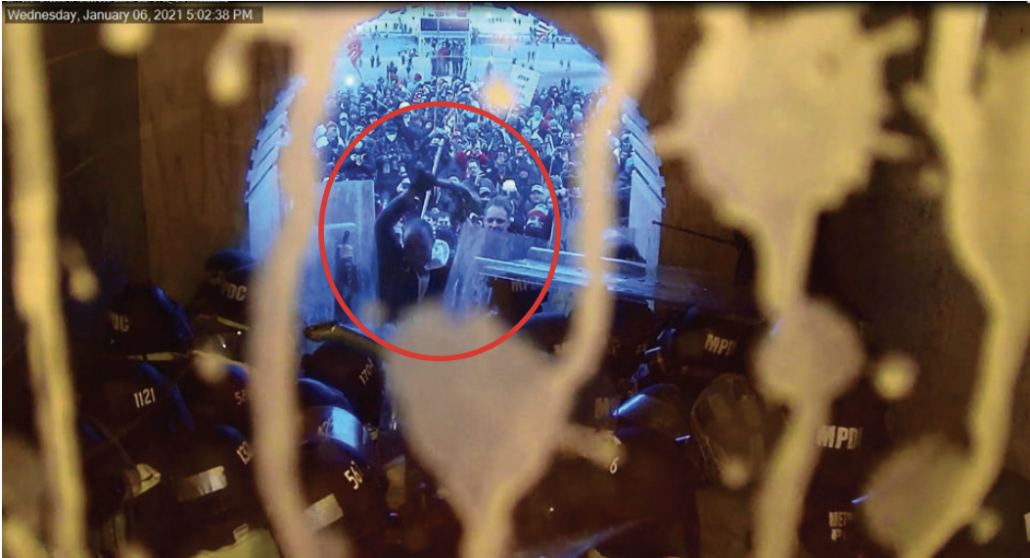 The same splatters that had made the video less useful at 4:20, made the video almost useless at at 5:02PM, the moment the sun set on January 6, as artificial lights turned on, rendering the splatters more opaque.

The screen cap appears in the arrest affidavit for Josiah Kenyon, whom the FBI claims can be seen in these videos, beating cops with a table leg with nails exposed.

The affidavit reveals that the FBI first got a tip on January 9 in response to photos of Kenyon released in some of the earliest Be On the Lookout photos released. By April 6, the FBI had obtained positive ID for Kenyon based off that wanted poster from two family members of Kenyon.

And yet it wasn’t until last week that he was arrested, on charges of assault and damaging a $41,315 Capitol window that make Kenyon a good candidate for a terrorism enhancement if he is ever convicted.

The affidavit makes clear that in the eight months since the FBI first identified Kenyon, they’ve been tracking his movements and spending from when he was in DC, perhaps to see if he had any accomplices. For example, the FBI pulled Metro surveillance video showing Kenyon entering the L’Enfant Metro station at 6PM, less than an hour after he was allegedly beating cops in the Tunnel and literally the moment that Muriel Bowser’s curfew went into effect on January 6. Further Metro surveillance video shows him getting off the Metro in Franconia-Springfield at 6:48PM.

Still, it’s hard to believe the process of tracking his movements on January 6 took eight months.

What may have taken eight months, however, was the replacement of the CCTV cameras in the Tunnel. The release of this screen cap, after all, shows how over the course of several hours on January 6 the rioters made the camera — a camera surveilling the Tunnel through which Joe Biden would walk, two weeks later, to be sworn in as President — almost useless.

The release of these videos not only make clear the assaults captured by the cameras on the day of the insurrection. They also show how to render them useless.

That may be one of the reasons supporters of the insurrection are demanding all the video be released.

Rudy’s Phones Defy Guarantees We’d Know of an Investigation into... John Durham Wants Permission to Delay Providing Evidence of How Weak His Michael...