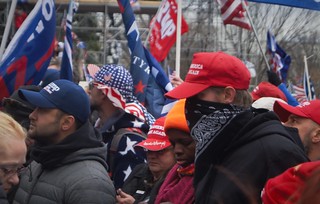 This New York Times article by Sabrina Tavernise shows how the hard right wing is organizing. The star of the story is Melissa Crabtree. The initial controversy is whether the city council of Enid Oklahoma should impose a mask mandate in the Summer of 2020, as Covid raged across the nation.

According to the article, Crabtree is the daughter of very religious parents, and is herself a deeply religious person. We get this anecdote:

Gender is blurred in ways that she said [Crabtree] believes God did not intend. She said a man in her church comes to Sunday services dressed in women’s clothing. When she was shopping this fall, a cashier at T.J. Maxx who checked her out looked like a man but, as she saw it, had feminine mannerisms.

She doesn’t like teaching anything about race to kids. She doesn’t like the rising number of immigrants. She thinks these things are “pulling our Republic apart at the seams.” She home schools her four children to protect them from these cultural changes. Her oldest son went with his father to Trump’s January 6 speech. She says they didn’t participate in the insurrection.

[Crabtree’s son] graduated from high school last year but did not want to go to college and “pay $100,000 to fight indoctrination.” She said he now works at Chick-fil-A and wants to teach his peers about patriotism.

After states and cities responded to the pandemic with lockdowns, mask mandates, and other public health measures, she began to research.

The more she researched online, the more it seemed that there was something bigger going on. She said she came to the conclusion that the government was misleading Americans. For whose benefit she could not tell. Maybe drug companies. Maybe politicians. Whatever the case, it made her feel like the people in charge saw her — and the whole country of people like her — as easy to take advantage of.

When she found out that Enid was considering a mask mandate, she decided to get involved. She used Facebook.

She felt contempt radiating from the other side, a sense that those who disagreed with her felt superior and wanted to humiliate her. She said she was taken aback at how people were ridiculing her on a pro-mask group on Facebook. She said she remembers one person writing that he hoped she would get Covid and die.

She can’t believe people are mean on the internet. She thinks “fear” is at the root of the meanness. (The articles doesn’t explain what that fear is.) The theme of victimization recurs throughout the article. This is new Council Member Whitney Roberts, a California transplant who runs a photography shop in Enid:

Ms. Roberts, who is 34, said that when she came out as a Trump supporter on Facebook in 2016, “I had a lot of friends delete me, without saying anything,” behavior that she said told her that they thought they were better than her, that she was not worth bothering with. Mr. Ezzell reminded her of that, she said, doodling instead of listening to people, “not even acknowledging that they’re there.”

Crabtree reached out to like-minded friends, and then created a Facebook page for the Enid Freedom Fighters. The first big action of the group was to attend the city Council meeting to speak against the mask mandate. Tavernise gives us a flavor of the meeting:

The meeting was unlike any [Councilman Jonathan Waddel] had ever attended. One woman cried and said wearing a mask made her feel like she did when she was raped at 17. Another read the Lord’s Prayer and said the word “agenda” at the top of the meeting schedule seemed suspicious. A man quoted Patrick Henry and handed out copies of the Constitution.

“The line is being drawn, folks,” said a man in jeans and a red T-shirt. He said the people in the audience “had been shouted down for the last 20 years, and they’re finally here to draw a line, and I think they’re saying, ‘We’ve had enough.’”

The mask mandate failed. Council members who supported it were shunned at Church, lost friends, and faced low-level threats. They lost their reelection bids. Former council member Waddell is thinking about leaving Oklahoma. The Enid Freedom Fighters have elected four people to the School Board, and put four people on the library board after a display of LGBTQ books during Pride Month.

The religious side of this story begins with Crabtree’s faith, but there’s more. She attends a Church led by Wade Burleson. Burleson

… whose church, Emmanuel Enid, is the largest in town. Enid has a substantial upper middle class, with large homes and a gated community near a country club and a golf course, and many of those families are part of the church’s 3,000-strong congregation,

Burleson is a supporter of an anti-vaxx doctor. (This link is amazing.)

Mr. Burleson used apocalyptic language, invoking Nazi doctors as a specter of where mask and vaccine mandates could end up. Mandates, he argues, are the first steps toward complete government control, and he feels called to warn people.

Burleson invited the right-winger Charlie Kirk who is touring churches around the country.

“They want to crush you,” Mr. Kirk said at an evening talk at Emmanuel Enid, referring to an unspecified “metropolitan elite,” and to government leaders, including Republicans. “They call you the smelly Walmart people. They do. You should hear the way your leaders talk about you. They have contempt for you. They want to try to turn Oklahoma into nothing more than a producing colony for the rest of the country.”

1. Tavernise frames this story in standard liberal dressing. She quotes social scientists saying thing like: people whose identity is threatened feel threatened and react forcefully. She says this is a story of two groups of people who both want what’s best for Enid.

That’s not what this is. Crabtree and her group follow standard right-wing Republican tactics: they go to meetings and scream at officials. They rile people up leading to low-level but deniable violence aimed at their opponents. It isn’t about being heard. It’s about bludgeoning officials into doing what the screamers want.

Tavernise doesn’t push on obvious questions. If Crabtree feels threatened, what exactly is she afraid of? Is it some kid at a TJ Maxx, or a guy in a dress at her Church? If so, what does she think should be done, exactly? How would she use the government to force that kid to talk like Johnny Cash? What is her vision for Enid? Are the Enid Freedom Fighters fighting for the freedom of anyone besides themselves?

2. The argument that opponents act superior is preached by the likes of the scold David Brooks in The Atlantic. See this post.

Democracy is founded on the willingness of all of us to listen respectfully to the arguments of others. I’d be delighted to hear how I can politely discuss the claim that Covid is a hoax designed to enable some unknown persons to exert control over other people for some unknown reason, or the claim that vaccines kill people.

3. At the end of the article, Tavernise quotes Crabtree:

““There are a whole bunch of people who are realizing, oh, apathy didn’t serve us well. Look at where we are. I think we better wake up and get involved. I think people are waking up.”

We’d better wake up to what the anti-democracy forces are doing. And by “we” I mean Democratic Party Politicians: their indifference to anyone except consultants and donors, and their happy decades-old memories of a vanishing US democracy, have put them soundly to sleep.