The Johnsons — Daryl and Daniel — Plead Up to Civil Disorder

There was a plea hearing yesterday that deserves more notice: father and son pair, Daryl and Daniel Johnson, pled guilty to civil disorder.

I believe it was the first straight civil disorder (18 USC 231) plea, though that’s only the beginning of my interest in the case. What’s more interesting is that, contrary to pleading down, from more serious charge to less serious, as normally happens, these men willingly pled up to the felony charge that can carry up to a five year sentence. 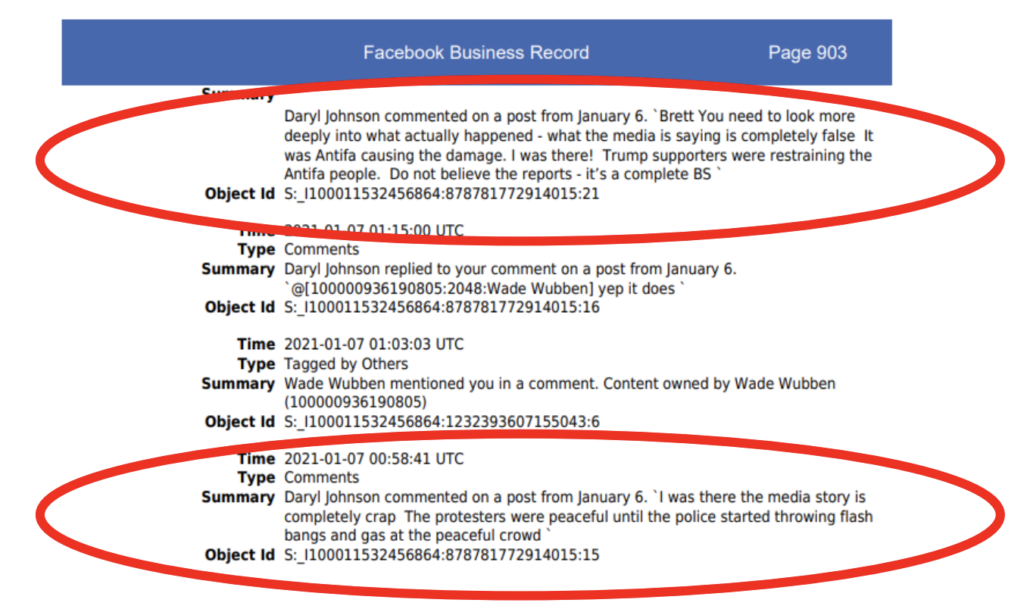 Still, when they were arrested in June, they appeared to be nothing more than MAGA tourists — and that’s how they were charged via Information just days after their arrest. Aside from Daniel’s boasts that he was “one of the first” inside the building, there was nothing in their arrest materials that suggested their voyage through the Capitol was any more notable than hundreds of others.

In September, prosecutor Laura Hill got the standard discovery overload continuance. In October, Daryl’s attorney Thomas Abbenante was the one to ask for one. He cited “newly discovered” evidence that required further review.

The government has produced through discovery newly discovered evidence in this case that needs to be reviewed and evaluated by all parties.

Then shortly before Christmas, a superseding Information, this one a felony, was filed, indicating they would be pleading guilty but providing no explanation for how their case had become a felony. That’s pretty quick work on a plea agreement, though.

The explanation became apparent in yesterday’s plea colloquy, before Judge Dabney Friedrich. Then men were among the mob who pushed open the East Door from inside.

While inside the building, JOHNSON walked near the Memorial Door, climbed a flight of stairs to the second floor, and walked into the Rotunda. At 2:37 p.m., JOHNSON walked out of the Rotunda toward the East Rotunda doors, where he encountered a line of law enforcement officers. The officers were standing in front of the East Rotunda doors to prevent rioters outside of the building from entering. Along with a group of other rioters, JOHNSON and his son, Daniel Johnson, rushed the line of law enforcement officers and helped push through the officers and push open the East Rotunda doors, allowing rioters outside of the building to enter. JOHNSON was at or near the front of the group of rioters on the interior of the Capitol when the doors were opened. JOHNSON and his son, Daniel Johnson, remained inside the Capitol and climbed another flight of stairs to the third floor before exiting on the first floor at approximately 2:46 p.m.

That is, the Johnsons were players in one of the tactically most important events of the riot, the opening of a second front. And given the description of their actions that day, they seemed to be fairly intent on opening that second front. Only after that did they try to go to the Senate chamber. Their path appears not that different from George Tenney and Darrell Youngers, the guys who were the first to breach that second door, or Philip Grillo, one of the first to be charged with it.

It’s likely, though, that something more than newly discovered surveillance footage led to the Johnsons’ added charges. Their pleas have a deviation from the boilerplate. While the agreements include a requirement that the men cooperate before sentencing …

Your client agrees to allow law enforcement agents to conduct an interview of your client regarding the events in and around January 6, 2021, prior to sentencing.

That language doesn’t include the standard requirement that they also share their phone and social media. Obviously, the FBI had already gotten both their Facebook accounts before arrest. The FBI seems to have seen one or both men’s phones, which is standard for guys who took as much video as they did, but they still want to interview these guys before they’re sentenced in April.

(I wonder whether they found Signal texts of interest that changed their path as MAGA tourists.)

Whatever happened, their quick plea seems to have saved them further trouble; given their comments on social media, they might otherwise have been exposed to obstruction charges, which carries a 20 year sentence.

As I’ve said before, the government is very close to rolling out a description of what it took to — and the kinds of premeditation that went into — opening that second door. Daryl and Daniel’s quick plea appears to have helped them avoid being a bigger part of that story.