Drive for Show, Putt for Dough, Cheat for Tax Deductions

I swear every time I think I’ve met the limit of repulsion for Trump, I meet a new threshold.

Martabano is a real estate attorney; MLB is a tax attorneys practice which sought to cut ties with Trump; Sheri Dillon has been a partner at MLB working on the Trump account. The rest of the named you are likely familiar with from previous news and posts.

This motion is only in relation to a civil action by NYAG Letitia James; the District Attorney of the County of New York (DANY) Alvin Bragg is conducting a parallel criminal investigation.

I’ve written before about Trump National Golf Club Westchester and the generally scammy and scummy way Trump and Trump org treated the community of Briarcliff where the course is located.

NYAG’s motion opened up a new can of angry bees from a location I haven’t looked at previously because it wasn’t a Trump golf course resort.

Seven Springs is an example of a golf course which didn’t happen, and what Trump did to try and keep the property while paying out as little as possible to do so.

This sounds relatively harmless; who doesn’t try to keep their expenses down?

Except Seven Springs is yet another example of Trump’s lousy judgment and his externalizing his failures onto others.

This is Seven Springs as it was back when it was owned by Eugene and Agnes Meyer (also known as the parents of Washington Post’s former publisher Katharine Graham née Meyer). It was built for the Meyers in 1915 for what then was an unfathomable amount of money – $2 million for a little over 28,000 square feet. (Note the rows of young trees planted at the top of the photo as well as the trees to the right side which follow the embankment to the Byram Lake Reservoir.) 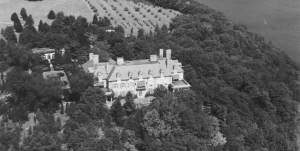 Agnes Meyer died in 1970; under the successor Meyer Foundation, Seven Springs was then used as a conference center by Yale University. In 1984 the foundation cut its ties with Yale and gifted the property to Rockefeller University.

Trump originally planned to develop the property into a golf course. A number of architectural design firms worked competitively on plans over a handful of years.

But nothing came of the effort for a number of reasons, the biggest barrier being the approval of the local community and his neighbors.

This is Seven Springs as it appears on Google Maps in satellite view. It is located almost half way between two golf courses – the Mt. Kisco Country Club (opened in 1928) and the Summit at Armonk (opened in 1961). 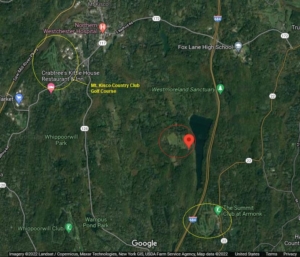 The addition of a Trump course at Seven Springs would mean three golf courses inside less than a 10-mile radius. Seven Springs is located on undulating terrain with granite underneath and wetlands on the property, making development extremely complicated and pricey.

Surface water from Seven Springs acreage drains into the Byram Lake Reservoir which provides drinking water for the Mt. Kisco community; a new golf course with all its lawn chemicals and additional automobile traffic dropping gasoline, oil, and more would increase pollutants in the reservoir. One can understand the community’s reluctance to approve a Trump course when there has already been one nearby for decades; the community knows just how much a golf course can affect the reservoir.

The property also abuts the Eugene and Agnes E. Meyer Nature Preserve immediately to the south which is owned by The Nature Conservancy. It is undeveloped woodlands overlooked by the 28,000 square foot house at Seven Springs.

This is what pissed me off.

Trump had to have known when he bought Seven Springs that the nature preserve which had once been part of the Meyers’ 1000-acre holding was next door to the immediate south of the estate. One of the tentative plans for a golf course snugged up to the north boundary of the preserve. 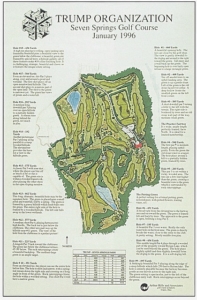 Once Trump finally gave up on this course after stringing along star-struck course developers for years, he decided he would pursue real estate development, tentatively subdividing Seven Springs to build up to 14 McMansion-sized homes.

But he apparently wanted or needed a through way across the 213 acres for both the purposes of development and for the future home owners.

He sued The Nature Conservancy and the community for an easement to build a road — extending Oregon Road which leads to Seven Springs along the drive on the property and then through the nature preserve over an unpaved path to where Oregon Road begins again south of the preserve.

Again, Trump had to have known when he bought the 213-acre parcel that it did not include an easement into/through the nature preserve. An unpaved path from Seven Springs into the preserve once existed, but a gate had been installed in 1990 between Seven Springs and the preserve. Rockefeller University had known about a previous easement but allowed it to expire during its ownership of Seven Springs.

The easement was extinct, demised, non-extant, and even more dead because Trump had allowed more than 10 years to pass between purchasing Seven Springs and suing for an easement.

And yet in August 2006 Trump went to court to get his way, costing The Nature Conservancy and the community time and money to fight off his demand for an easement and road through pristine woodlands because he didn’t have the goddamned foresight to see the Seven Springs property was problematic as golf course and residential development when he bought it in 1995.

Never mind the fact the course would be in competition with two well-established courses.

Now it gets messy.

Because he can’t develop the property at all without some accommodation for a road and the neighbors and community aren’t happy but he wants to hang onto the property for his family’s use, Trump pursued tax deductions.

It’s not clear from the NYAG’s motion when Trump began pursuit of a tax deduction for a 150-acre conservation easement on Seven Springs property. In exchange for promising not to develop property, Trump’s organization obtained a $5 million tax credit from 2014 to 2018 for Seven Springs and Trump National Golf Club Los Angeles combined.

He also pursued a very similar conservation easement tax deduction at Trump National Golf Club Los Angeles worth multiple millions in tax credits. The land set aside from development was used as a driving range – no buildings constructed, no fairways or greens, just a patch of mowed lawn for practice shots but still part of the golf course business, and surely not open to the public for free. This tax deduction, too, is being examined by NYAG.

Which part of the 213-acre Seven Springs property did he set aside to conserve?

The part which had been cleared of trees planted by the Meyers?

The part which has been cleared of trees and brushed out down the slope to the Byram Lake Reservoir, which realistically can’t be developed anyhow because of that slope?

The part which couldn’t be developed because of the lack of local approvals and the road he couldn’t add? 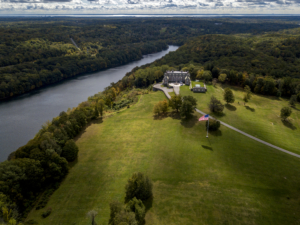 Which is the question at the heart of NYAG’s investigation into Seven Springs: how can Trump place a value on the 150-acre conservation easement for a tax deduction based on high-end residential development, when it couldn’t be developed?

How can a permanent swath of lawn punctuated with trees be the same value as new McMansion construction?

It’s not worth roughly $2-3 million a year in tax deductions on the face of it.

Another really irritating part of this beyond the pudgy orange weasel himself is the absence of the Internal Revenue Service and the New York State Department of Taxation and Finance. How did this scofflaw get away with millions of dollars in sketchy tax deductions all this time?

This situation should never have gotten this far out of hand; the first time a taxpayer, human or corporate, takes multi-million tax deductions on conservation easements, that’s the time an agent from either the IRS or the state tax authority physically inspects the property and investigates its backstory to ensure it’s a legitimate conservation easement.

But like everything else Trump has gotten away with so far, the right authorities to deal with him at the time he violated a law or regulation failed to do their duty and the public has no idea why.

If I took a multi-million tax deduction on a conservation easement this year, you can bet I’d be sucked into an audit as fast as you can blink.

Once NYAG and DANY are done with their investigations, local, state, and federal governments need to look at what triggers should set off audits and investigations because whatever they’re currently relying on isn’t working.

$2-3 million is one hell of a lot of tax revenue which could have paid for many public services in New York State and beyond.

And I haven’t even mentioned the other Trump properties in New York though I’ve written about them before.

Nor have I mentioned the easement lawsuit and the creation of conservation easements for tax purposes occurred while Trump was appearing in The Apprentice, kitted out and scripted to look as if he was a successful, honest businessman and real estate developer season after season.

Eric Trump, he of 500-plus invocations of the Fifth Amendment under questioning by NYAG, said of Seven Springs, “It was home base for us for a long, long time…”

Yeah? Well, all your base are belong to us if Seven Springs ends up seized for taxes. 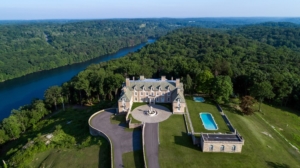 Seriously, fuck this base.

“HOLD. THE. LINE!!!” DOJ’s Late Research into Brandon Straka’s... Bennie Thompson to Ivanka: Come In from the Conspiracy