It should be absolutely crystal clear the language used by Individual-1 in reference to these persons aged 44, 40, and 38 is pure propaganda. 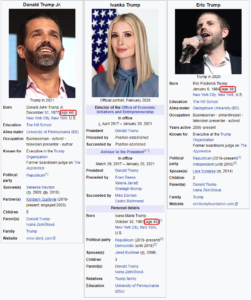 These are graduates of pricey universities who are old enough to have adult children. One of them was an advisor to the former White House occupant.

They may be the progeny, descendants, and heirs of Donald J. Trump but they are not juveniles, youngsters, or children.

His reference to Donald Jr., Ivanka, and Eric as children is subtly racist as well, because in 1989 Trump would never have referred to these persons:

Yes, racist, though Trump is hardly the first and only to use the white supremacist convention which allows any white adult with a living parent to be called a child while Black persons of any age are labeled in terms which erase any any and all innocence no matter the situation.

Innocence is exactly what Trump wants to convey and it’s fallacious bullshit.

Trump will continue to spew this manipulative crap to skew the public’s sentiment, but every bit of it must be rejected and set straight with the truth.

All three of these adults and their father have been subpoenaed by the New York Attorney General in relation to an investigation into the Trump Organization’s use of fraudulent and misleading asset valuations to obtain economic benefits.

This is hardly the stuff of children who can’t knowingly enter contracts. The NYAG’s brief profiles of Trump’s adult progeny describe people who are quite capable of managing contracts:

These are adults who need to cooperate with law enforcement because their father isn’t going to make this any better. He’s clearly not stepped up to respond to the subpoena and instead thrown “children” in front of the NYAG’s bus.