The Five Versions of the Mueller Report

As preparation for wading into the argument about why DOJ hasn’t indicted Trump on the obstruction charges laid out in the Mueller Report, I wanted to post links to the five different versions of the Report and comment on what they might tell us of the fate of Mueller’s work under Billy Barr. The five versions (which are all available at this link) are:

This is the version of the report released in April 2019. It had four kinds of redactions:

Almost immediately after the release, a bunch of outlets FOIAed the report, including Jason Leopold. This is the version released in response to those FOIAs.

The release is identical to the one released months earlier (in that no new information was unsealed). But it used FOIA exemptions to explain redactions instead of the four terms used on original release.

This is the description of those exemptions: 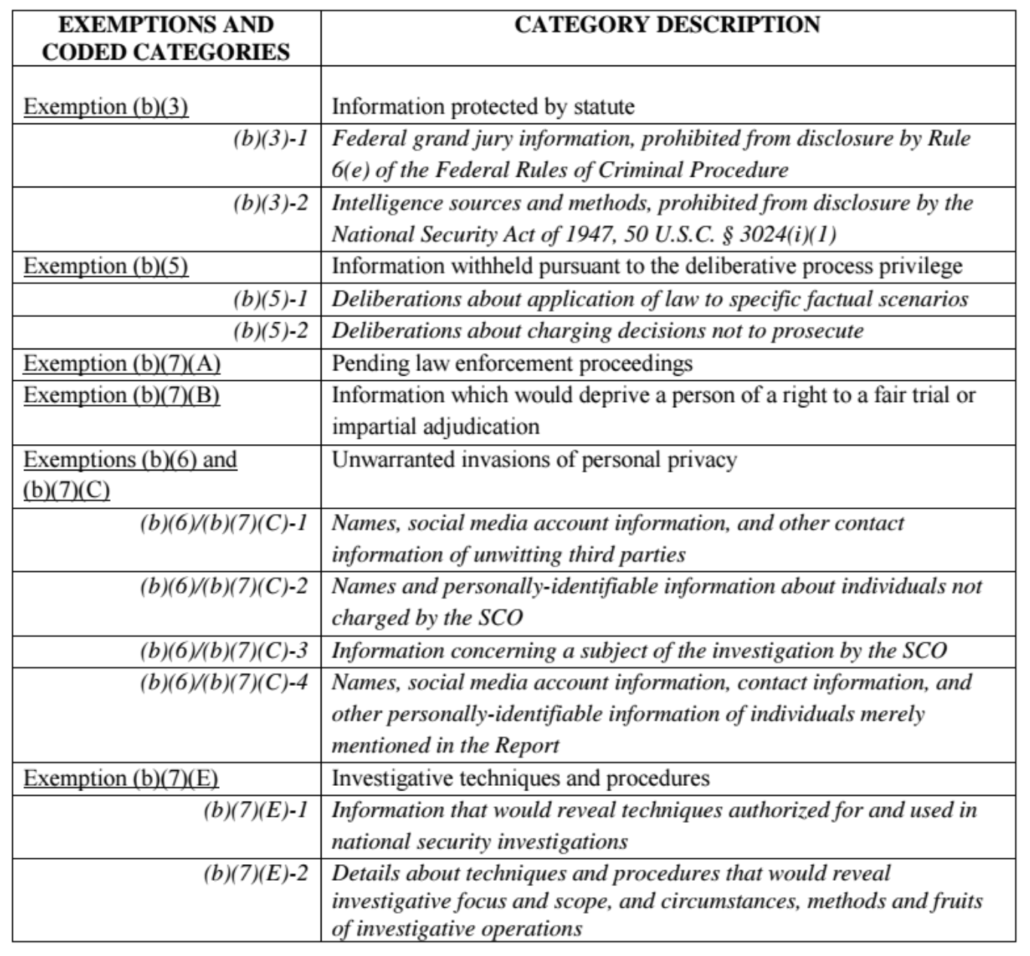 Because the release effectively created a category to deal with everything related to the Roger Stone trial (about which the Concord Trolls made a big stink), it provided a way to identify which of the referrals at the end pertained to Stone.

Referrals 4 and 14 both pertained to the Stone trial. Because the referrals are alphabetical, those referrals might pertain to Jerome Corsi (who obviously lied to Mueller) and Stone himself.

While there was a bunch of newly unsealed stuff in the body of the report, the two Stone-related referrals remained redacted, albeit with one fewer exemption (b7B, a disclosure that might prevent someone from getting a fair trial, was gone).

While not a full new report, in September 2020, DOJ released a spreadsheet listing all the redactions. They ended up withdrawing the redactions for a number of things, especially pertaining to the troll farm prosecution. Among other things, the newly unsealed information revealed that what was described as an investigation into a “Foreign campaign contribution” (the Egyptian bank bribe to Trump) and investigations into Paul Manafort’s firms had both been closed. The release is useful because it seems to date the closure of those investigations to sometime between June and September of the election year.

Literally on the eve of the election, DOJ released eight new pages, as well as a full report incorporating those eight pages and the withdrawn exemptions described in September. The newly unsealed information addressed the charging decisions surrounding the hacking charges.

The single most important newly disclosed detail is a footnote that reveals the “factual uncertainties” around Stone’s knowledge that the GRU continued to hack Hillary when he purportedly coordinated the release of the Podesta emails had been referred to the DC US Attorney’s Office for further investigation. That is, the investigation into Stone’s potential coordination with Russia was not done at the time Mueller shut down the investigation, a disclosure that has yet to be reported by any major outlets.

The referrals section in the full report is somewhat mystifying. As noted, the Egyptian bribe investigation and the Paul Manafort referrals are unredacted, reflecting that those investigations had been closed. The unsealed information on the Manafort firms explains an earlier redaction convention; earlier, these entries lacked some of the exemptions all other referrals had. That’s probably for two reasons: first, those Manafort companies aren’t mentioned elsewhere in the report (and so didn’t have a b(7)(C)-4 exemption)) and were not biological persons (and so didn’t have the privacy exemption).

Here are the last two pages of the referrals for all four versions, side by side (the rest are at this link). 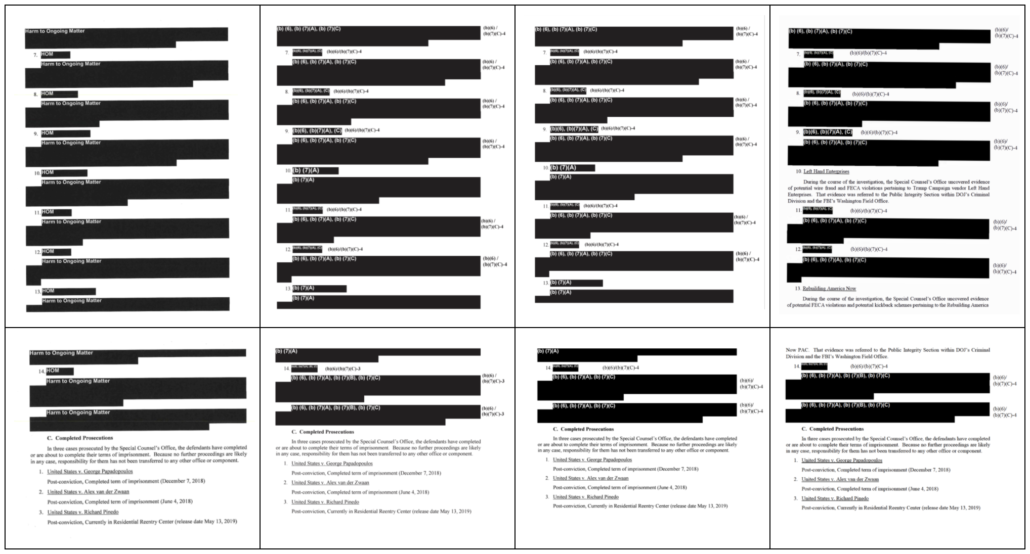 The two Stone-related entries, like all the other redacted ones, remained exempted for an ongoing investigation (b7(A)).

But what doesn’t appear in that list, even though you’d think (and I long thought) it would, is something describing the George Nader child exploitation and foreign influence peddling referrals, both of which had been revealed in 2019 and the former of which is undoubtedly a Mueller referral. The fact that DOJ was unsealing closed investigations but has not unsealed an entry for the Nader referral that undoubtedly was opened after a Mueller-related FBI Agent found the CSAM on Nader’s phone suggests that these referrals aren’t necessarily everything that arose out of the Mueller investigation.

The distinction may be explained by a footnote that got unsealed with the last release, explaining why Greg Craig was treated differently than Tony Podesta and Mercury, all foreign influence peddling investigations that arose out of the Manafort team. “Greg Craig and FTI Consulting were treated as outright referrals (and therefore listed in Part B, infra) because evidence about their conduct was uncovered in the course of our authorized investigations.”

There is, however, a single entry that could be a Tom Barrack referral, item 1, which is another investigation that arose out of the Mueller investigation, one that was charged once Barr got out of the way of it.

We might learn more the next time Leopold liberates an entirely new copy.

Let me be clear: I don’t think we’ll see much of these. The most recent release was 15 months ago, the statutes of limitation on any referrals will be tolling in the same time frame as obstruction charges would be. More recent 302 releases suggests there are few areas where investigation remains ongoing.

Given the way, though, that Trump’s first impeachment was largely a continuation of Paul Manafort’s Ukraine dalliances, that parts of January 6 are just a continuation of things (like Stone’s Stop the Steal and some of the people Mike Flynn worked with) that go back to 2016, and Trump’s tools of obstruction (most notably pardon dangles) remains the same, any current investigation may pull threads from past ones.

There’s a good deal more complexity remaining in the detritus of the Mueller investigation than people are allowing for.

Yesterday, DOJ released four pages showing the declination on misdemeanor CFAA charges for Don Jr, even though they could have proven it.

They also show that Mueller declined prosecution for JD Gordon for being an Agent of Russia.

Note: this post has been updated with the most recent release.

Imagine if Woodward and Bernstein Buried the Ties between the Burglars and Nixon... On Unrealistic Expectations for Mueller Report Obstruction Charges