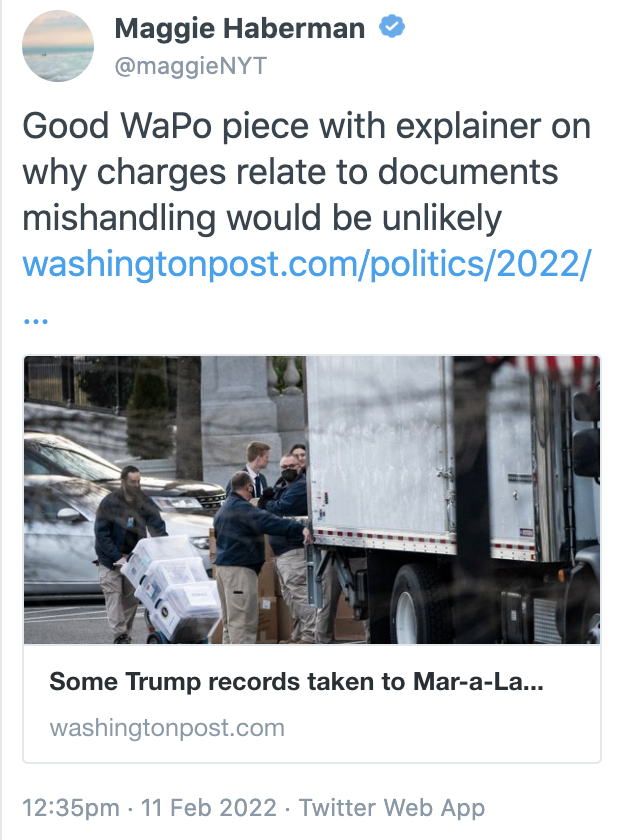 In the wake of news that Trump:

A number of people are making the obvious comparison between his attacks on Hillary, especially his ceaseless efforts to increase her legal jeopardy, and his own criminal exposure. Those comparisons are most important to raise, in my opinion, with the journalists who chased that story relentlessly at Trump’s behest in 2016 but who have already dismissed the interest of this.

Some have made the comparison with attacks on Speaker Pelosi for tearing up one of Trump’s State of the Union speeches.

But there’s a third comparison to keep in mind: the DOJ Inspector General investigation of Jim Comey for taking home his memos documenting Trump’s corruption.

As CNN describes it, some of the most obvious immediate exposure Trump would have would be under 18 USC 2071 (which, auspiciously, prohibits someone from holding office).

But for a charge like this to fly, prosecutors would need to show that Trump had “willfully” violated the law — a high bar, though one that prosecutors could potentially meet given the frequent efforts within the White House to try to preserve records Trump would habitually mutilate.

Furthermore, other criminal laws could come into play as well, if an investigation by the Justice Department progresses.

“If the intent was ‘Let me get these documents taken out of the way because they could look bad, they could be damning for me in an investigation, in a lawsuit,’ then you’re talking about potential obstruction of justice. So the devil will be in the details here,” said CNN legal analyst Elie Honig.

Though for once I agree with TV Lawyer Elie Honig that, depending on what Trump took and why, it could be a basis for obstruction charges.

But Trump has done more than make his willfulness obvious with his habit of ripping up Presidential Records.

He also wanted Jim Comey to be prosecuted for doing just what he did.

An investigation into Comey’s treatment of the memos he wrote documenting Trump’s efforts to halt the Russian investigation concluded that Comey had violated his employment agreement by bringing the memos home.

Comey’s actions with respect to the Memos violated Department and FBI policies concerning the retention, handling, and dissemination of FBI records and information, and violated the requirements of Comey’s FBI Employment Agreement. Below, we discuss these violations.

Comey violated Department and FBI policies, and the terms of his FBI Employment Agreement, by retaining copies of Memos 2, 4, 6, and 7 after he was removed as Director, regardless of each Memo’s classification level. As a departing FBI employee, Comey was required to relinquish any official documents in his possession and to seek specific authorization from the FBI in order to personally retain any FBI documents. Comey failed to comply with these requirements.

Under Department of Justice Policy Statement 0801.02, Removal of and Access to Department of Justice Information, the Department “owns the records and information…captured, created, or received during the conduct of official business.”87 Likewise, the FBI designates all official records and material as “property of the United States” and requires departing employees to “surrender all materials in their possession that contain FBI information…upon separation from the FBI.”88 This policy is reiterated in Comey’s FBI Employment Agreement, which specifically states that he was required to surrender, upon termination of his employment, any materials in his possession “containing FBI information.”

A Department employee who wants to retain Department records or information after their employment ends must make a written request, receive approval from the appropriate official, and execute a nondisclosure agreement.89 As the FBI Director and Head of a Department Component, Comey was required to apply for and obtain authorization from the Assistant Attorney General for Administration to retain any FBI records after his removal. 90

Comey violated these Department and FBI policies by failing to surrender his copies of Memos 2, 4, 6, and 7 upon being removed as FBI Director and by failing to seek authorization to retain them. Comey’s explanation for his conduct was that he considered the Memos to be personal records, but for the reasons previously described, this assertion is without any legal basis. In view of the clarity of relevant provisions of law, policies, and Comey’s Employment Agreement, the assertion that the Memos were personal records was not reasonable. We found it particularly concerning that Comey did not tell anyone from the FBI that he had retained copies of the Memos in his personal safe at home, even when his Chief of Staff, the FBI’s Associate Deputy Director, and three SSAs came to Comey’s house on May 12, 2017, to inventory and remove all FBI property.

87 DOJ Policy Statement 0801.02, § I. The only items that departing employees may remove without Department permission are “[p]ersonal materials or information, in any format, that is not related to the business of the Department”; copies of any unclassified information that has officially been made public; and a copy of the employee’s email contacts. Id. Comey’s Memos were not within any of these categories.

It further faulted Comey for not informing the Bureau that he had shared the memos with his attorneys after they informed him they had retroactively classified the memos.

On June 7, 2017, Comey learned of the FBI’s classification decision regarding Memo 2 when the FBI allowed him to review copies of all seven Memos, with classification banners and markings, in preparation for his June 8, 2017 congressional testimony. Once he knew that the FBI had classified portions of Memo 2, Comey failed to immediately notify the FBI that he had previously given Memo 2 to his attorneys.101

The FBI’s Safeguarding Classified National Security Information Policy Guide clearly states that “[a]ny person who has knowledge that classified information has been or may have been lost, compromised, or disclosed to an unauthorized person must immediately report the circumstances to his or her security office.” 102 Comey violated this requirement by failing to immediately inform the FBI that he provided Memo 2 to his attorneys.

Comey was referred to the FBI (which is standard).

The OIG has provided this report to the FBI and to the Department of Justice Office of Professional Responsibility for action they deem appropriate.

And predictably, Trump complained that Comey would not be prosecuted as a result.

The fact that James Comey was not prosecuted for the absolutely horrible things he did just shows how fair and reasonable Attorney General Bill Barr is. So many people and experts that I have watched and read would have taken an entirely different course. Comey got Lucky!

Bryan Dean Wright, former CIA Officer(Dem): “In 2016 we had a Coup. We have to take Comey and others to task. Makes no sense not to prosecute him. Comey got a book deal. I fear for my Country. He tried to kneecap our duly elected president, and there are no consequences.” @fox&amp,Fs

“The IG found that James Comey leaked Classified Documents to his attorneys, which can be (is) a violation of the Espionage Act. This is consistent with all the lies that Comey has been spreading. @GreggJarrett @ByronYork @LouDobbs

So they now convict Roger Stone of lying and want to jail him for many years to come. Well, what about Crooked Hillary, Comey, Strzok, Page, McCabe, Brennan, Clapper, Shifty Schiff, Ohr &amp, Nellie, Steele &amp, all of the others, including even Mueller himself? Didn’t they lie?….

To be fair, Comey also shared one of his memos with Daniel Richman (though that one did not include classified information), which was also included in the report’s findings.

Still, Trump endorsed the idea that Comey be prosecuted for theft of government documents or even the Espionage Act.

And then, having done that, Trump took a number of Top Secret documents with him when he left.

This is, at one level, just more Trump hypocrisy.

But it is also proof he was aware of — and claimed to adhere to — the rules prohibiting taking documents home.

While Trump Was Secretly Loading Up Documents, Mike Ellis Was Hoarding an NSA... Attitudes Toward Freedom And Equality