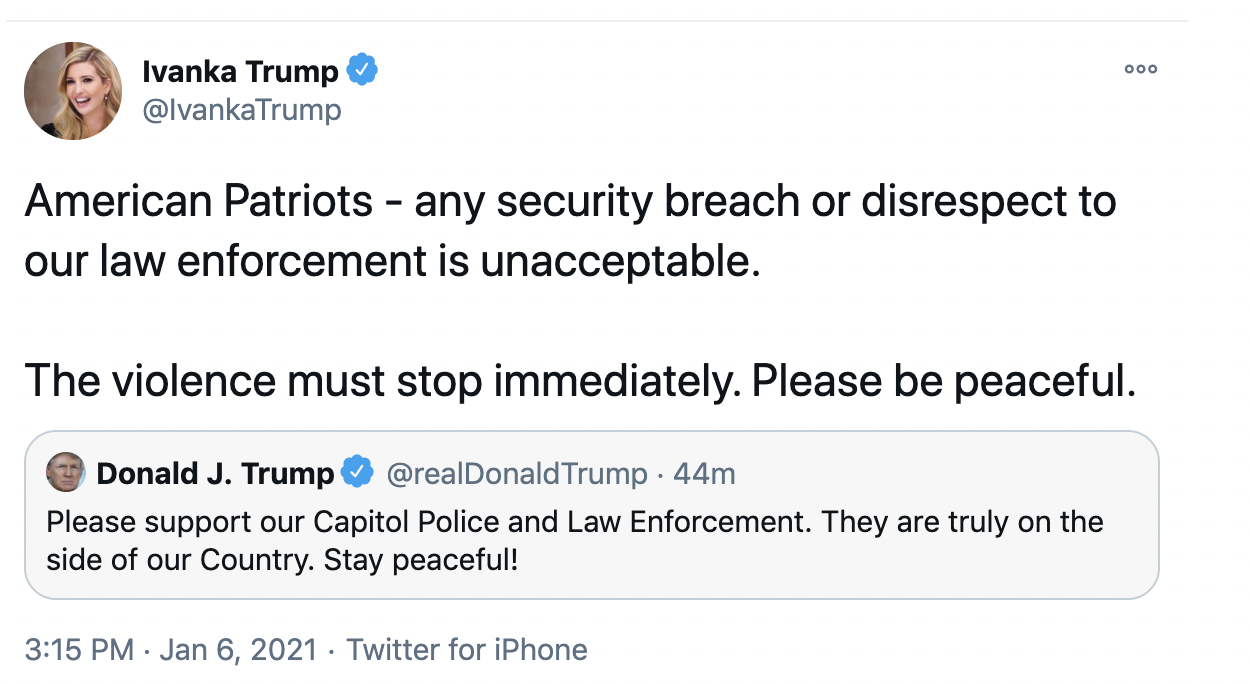 Yesterday, the Archives sent House Oversight Chair Carolyn Maloney a letter on all the gaps in the production of social media records under Donald Trump’s White House. It describes that the efforts to capture the former President’s tweets were inadequate. It then explains that there was no effort to capture the deleted social media content from other White House staffers until 2018, and even then, some people were not enrolled until just before the end of the Administration.

The Trump White House did not take any steps to capture deleted content from any Trump Administration social media account other than @realDonaldTrump or @POTUS prior to enrolling them with ArchiveSocial. As with @realDonaldTrump, many other Trump Administration social media accounts were not enrolled until the summer or fall of 2018, even though these accounts were active for over a year prior to enrollment, during which time deleted or modified Presidential record content was not captured. Other accounts were not enrolled until just prior to the end of the administration.

It then lists seven people whose Twitter traffic was not captured by the White House. Ivanka was among those seven.

NARA identified seven Twitter accounts that we think contain presidential record information, but were not captured by the Trump Administration. These accounts belonged to Andrew Giuliani, Chad Gilmartin, Ivanka Trump, Kayleigh McEnany, Kellyanne Conway, Mark Meadows, and Peter Navarro. After the end of the administration, NARA obtained the publicly available tweets from these accounts in order to supplement its archival collection.

That’s important because Ivanka tweeted things on January 6 that are central to both the FBI and Select Committee investigations into that day, including a tweet in which she encouraged the rioters, but called on them to avoid violence. 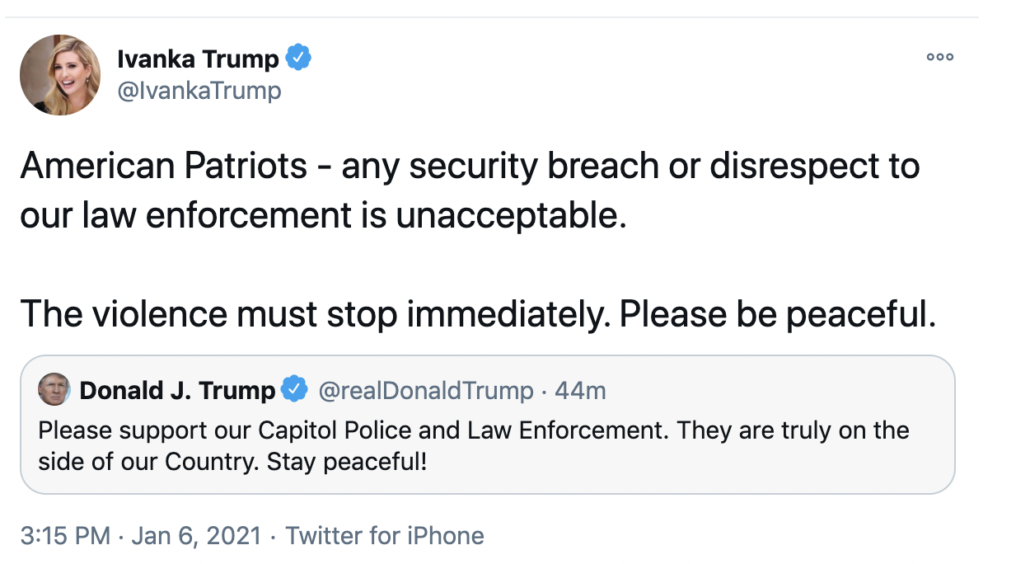 This is the tweet she cited in a statement released after the Select Committee invited her to formally disavow the agreement her father entered into with multiple charged conspiracies.

Ivanka Trump just learned that the Jan. 6 Committee issued a public letter asking her to appear. As the Committee already knows, Ivanka did not speak at the January 6 rally. As she publicly stated that day at 3:15pm, “any security breach or disrespect to our law enforcement is unacceptable. The violence must stop immediately. Please be peaceful.”

But as CNN reported the day of the riot, Ivanka deleted the tweet minutes after sending it, thereby violating the Presidential Records Act. (h/t SB for reminding me she had deleted tweets)

As the Guardian reported Thursday, the Select Committee is considering subpoenaing Ivanka.

The House select committee investigating the Capitol attack is considering issuing a subpoena to Ivanka Trump to force her cooperation with the inquiry into Donald Trump’s efforts to return himself to power on 6 January, according to a source familiar with the matter.

Any move to subpoena Ivanka Trump and, for the first time, force a member of Trump’s own family to testify against him, would mark a dramatic escalation in the 6 January inquiry that could amount to a treacherous legal and political moment for the former president.

The panel is not expected to take the crucial step for the time being, the source said, and the prospect of a subpoena to the former president’s daughter emerged in discussions about what options remained available after she appeared to refuse a request for voluntary cooperation.

But the fact that members on the select committee have started to discuss a subpoena suggests they believe it may ultimately take such a measure – and the threat of prosecution should she defy it – to ensure her appearance at a deposition on Capitol Hill.

If they subpoena her, she will be obligated, by law, to turn over all the records pertinent to that day, including that tweet she sent, hailing the rioters who had obstructed the vote certification, but disclaiming violence.

The Archives seems to believe she may be unable to produce an original copy of that tweet. (This would be the case if she was among the people whose tweets “were not enrolled [in the archiving system] until just prior to the end of the administration.”)

The Presidential Records Act has no legal teeth. Ivanka will not get in legal trouble for the act of deleting that tweet itself. But given that she (and the White House) had an affirmative obligation to ensure that did get archived, having deleted it may pose other kinds of legal jeopardy for her.

Relatedly, as you’ve likely heard, Judge Amit Mehta upheld part of the conspiracy lawsuits against the former President based, in part, on a reading that Trump’s later tweets encouraging rioters could be seen as ratifying the violence. Here’s that decision, which I’ll return to.

Updated to clarify that this may have automatically been archived, depending on whether and when her tweets were enrolled in the automatic archiving system.

Durham Says It’s Not His Fault His Former Boss Called for the Death of... John Durham Accuses One of His Key Fact Witnesses — Sergei Millian’s...