After Almost Six Years, FEC Reveals Identity of the Guy Who Asked for Guccifer 2.0’s Help to Beat David Cicilline 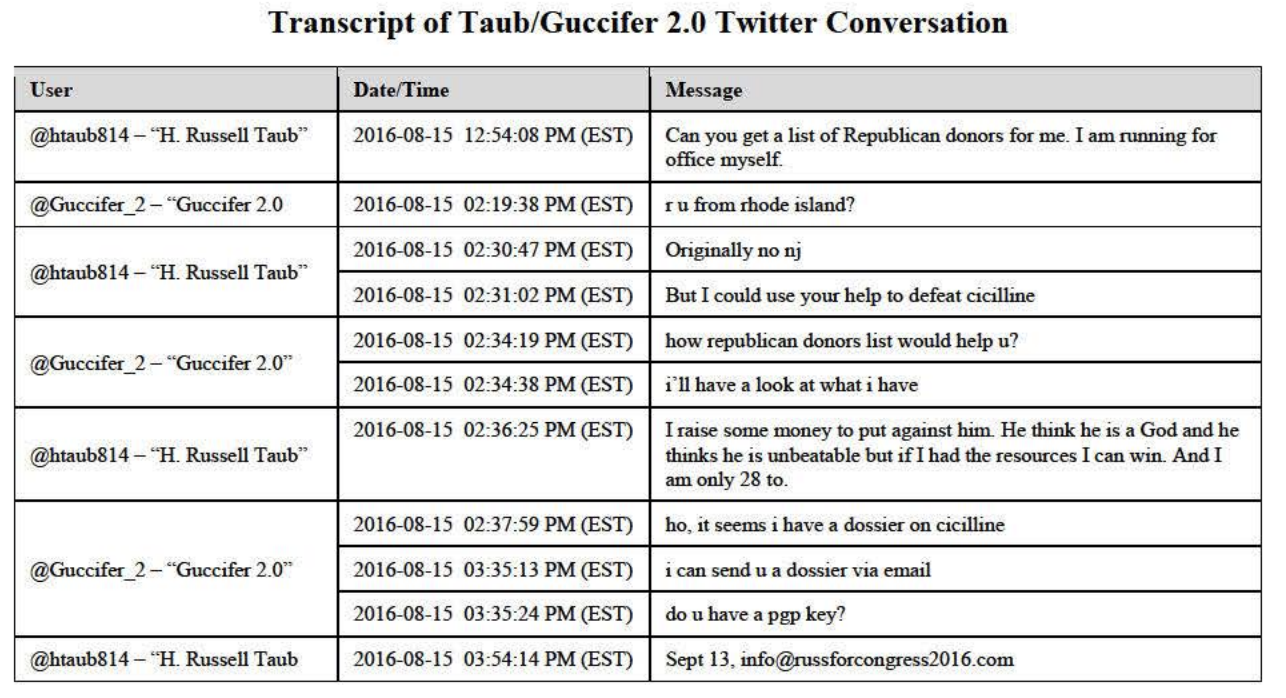 Before he defrauded a married couple out of more than $1.2 million dollars, Russell Taub got three reports from Guccifer 2.0 in an attempt to win a Congressional seat.

In a sentencing memo for two counts of violating the Federal Election Act by running fraudulent PACs, Taub claimed that his campaign against Rhode Island Democrat David Cicilline in 2016 was legal and ethical.

Russell has been a sincere part of the legitimate political process for the past several years. Indeed, he was the Republican Party candidate to represent Rhode Island in the United States Congress in 2016, and there has been no suggestion of any improper diversion of funds or similar financial impropriety during his campaign. He was defeated but he ran a clearly legal and ethical issues-oriented campaign.

(h/t UPBB for alerting me to this report on the disclosure.)

But an SEC judgement from last year unsealed in recent days reveals that Taub was the political candidate who solicited and obtained a dossier of information to use against Cicilline from Guccifer 2.0.

2. On August 15, 2016, Taub sent a Twitter direct message to Guccifer 2.0, asking: “Can you get a list of Republican donors for me. I am running for office myself.” Taub said, “I could use your help to defeat cicilline.” He further explained that a donor list would help to “raise some money to put against [Cicilline] . . . if I had the resources I can win.” Guccifer 2.0 replied, “it seems i have a dossier on cicilline . . . I can send u a dossier via email.” Taub then provided the email address, [email protected] for receipt of the dossier.

Because Taub had, as part of his 2019 plea on the fraud crimes, agreed to pay restitution to the donors he defrauded, the FEC deemed him unable to pay a penalty for soliciting a foreign donation, and closed the case.

What appears to have happened at the Commission is that, the FEC, which hadn’t had a quorum in Trump’s last years, took up a number of complaints pertaining to the Mueller investigation in 2021. At that point, in April 2021, the FEC still didn’t know who the candidate was. FEC then obtained more information (possibly from DOJ), which the General Counsel put together in a report.

It provided more details of the exchange, including a transcript of the DMs they exchanged. 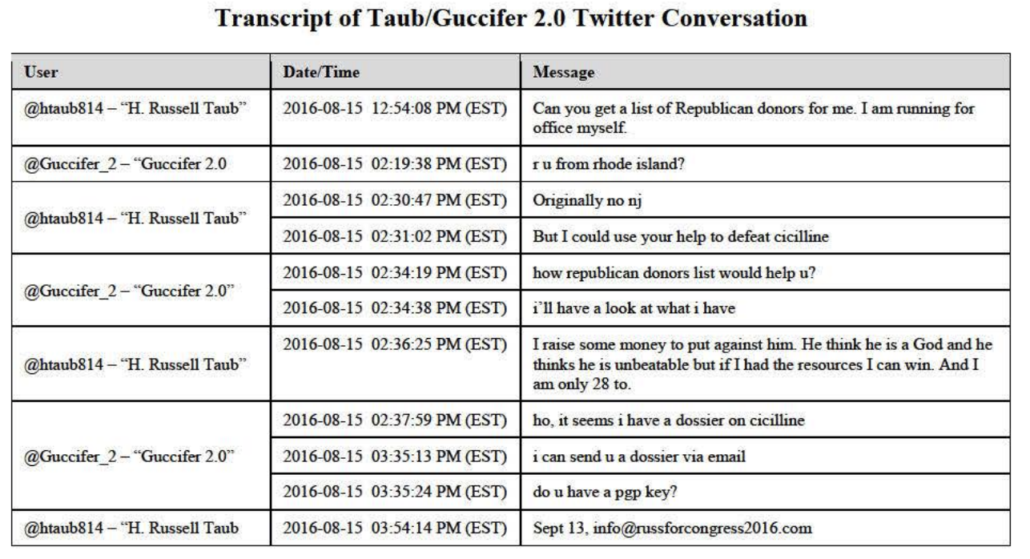 About 15 minutes later, “Guccifer2 <[email protected]>” sent an email to [email protected] with a zipped file named “Cicilline_David.7z,” but Taub apparently could not open the documents in their compressed format,

Two days later, on August 17, 2016, [email protected] sent the files again but not in the compressed fo1mat.

The August 17, 2016 email from Guccifer 2.0 to Taub included 10 attachments, all of which were documents related to Cicilline, apparently stolen from the GRU’s election-related hacking targets. 28 Among the attached documents were three professionally produced opposition research reports on Cicilline. The first was a 206-page self-opposition “Research Repo1i” prepared by Walsworth Landset Research for “Team Cicilline,” which highlighted “vulnerabilities that Cicilline may encounter dming his re-election campaign in 2012.”29 It  provided an overview of Cicilline’s political career, described his voting patterns, and analyzed 2 Cicilline’s background and position on nearly three dozen major issues. The second was a 45- 3 page self-opposition research “Vulnerability Report” prepared for Cicilline for Congress by 3rd Coast Research in May 2010. 30 4 It analyzed “Top Attacks” against Cicilline on numerous issues 5 and provided in-depth background information about Cicilline. The report states that it is “an internal document and is not intended for public review or circulation.”31 6 The third is a 68-page 7 “Polling Memo,” dated April 26, 2010, apparently prepared for the campaign of Cicilline’s 2010 Democratic primary challenger, Bill Lynch. 32 8 The report summarizes Cicilline’s background 9 and provides commentary on where Cicilline might be vulnerable to attacks. 10

The remaining documents consist of three documents with polling data from the 2010 11 election cycle, including the results of a “Master Questionnaire” apparently conducted by The Feldman Group, Inc. on behalf of the Cicilline Committee in September 2010.33 12 There are also  news articles related to Cicilline and one of Cicilline’s U.S. House of Representatives Financial 2 Disclosure Statements. Russell Taub for Congress terminated in 2018.34 3 Following his bid for Congress, Taub 4 solicited donations to organizations he called Keeping America in Republican Control (“KAIRC”) and Keeping Ohio in Republican Control (“KOIRC”).35 5 On March 21, 2019, Taub 6 pled guilty to using these organizations to commit wire fraud in violation of 18 U.S.C. § 1343 and failing to file reports with the Commission in violation of 52 U.S.C. §§ 30104 and 30106.36 7 8 As part of his sentence, Taub was ordered to serve three years in prison and pay over $1.1 million in restitution to his victims.37 9 These activities were also the subject of MUR 7479 in 10 which Taub was a respondent; on March 9, 2021, the Commission dismissed the allegations as an exercise of prosecutorial discretion under Heckler v. Chaney, 470 U.S. 821 (1985).38

The FEC voted to revisit that decision in September, but stuck to the original decision.

What’s unclear is what DOJ ever did with this investigation.

Taub is almost certainly not among the referrals in the Mueller Report (the referrals are alphabetical, and the last one pertains to Roger Stone), though the the Report was completed after he had pled on the more serious fraud charges. While both the GRU indictment and the Mueller Report mention this exchange, neither includes a formal prosecutorial declination.

That said, it may be that a discussion of his solicitation of Guccifer 2.0 appeared in his sentencing memos.

There are several redacted paragraphs in the government sentencing memo describing the political harm his crime did, where his history (including criminal history) would normally be. His own memo describes that this is “his first serious offense,” though doesn’t describe what hte non-serious offenses were.

Curiously, while Taub’s memo describes trying to get a cooperation deal, the government memo describes that, “none of the information provided by the defendant ultimately proved useful or actionable.”

Mueller obviously had all the information implicating Taub in taking an illegal contribution from Guccifer 2.0 by July 2018, when he indicted the GRU. It was that same month that a former Secretary of the Navy whose name Taub was using in his fundraising sent him a cease and desist letter. The complaints to the FEC about Taub’s graft came in the next month, on August 16, 2018 (but may have been evident from the work Mueller did to understand Taub’s interactions with Guccifer 2.0). So it may well be that Taub’s prosecution for much more serious fraud supplanted any punishment for accepting help from Russia.

Judge Mehta Observes that Roger Stone’s Role on January 6 “May Prove... The Half of Trump’s Conspiracy to Obstruct JustSecurity Left Out: Inciting...