How Not to Lose a World War between Authoritarianism and Democracy 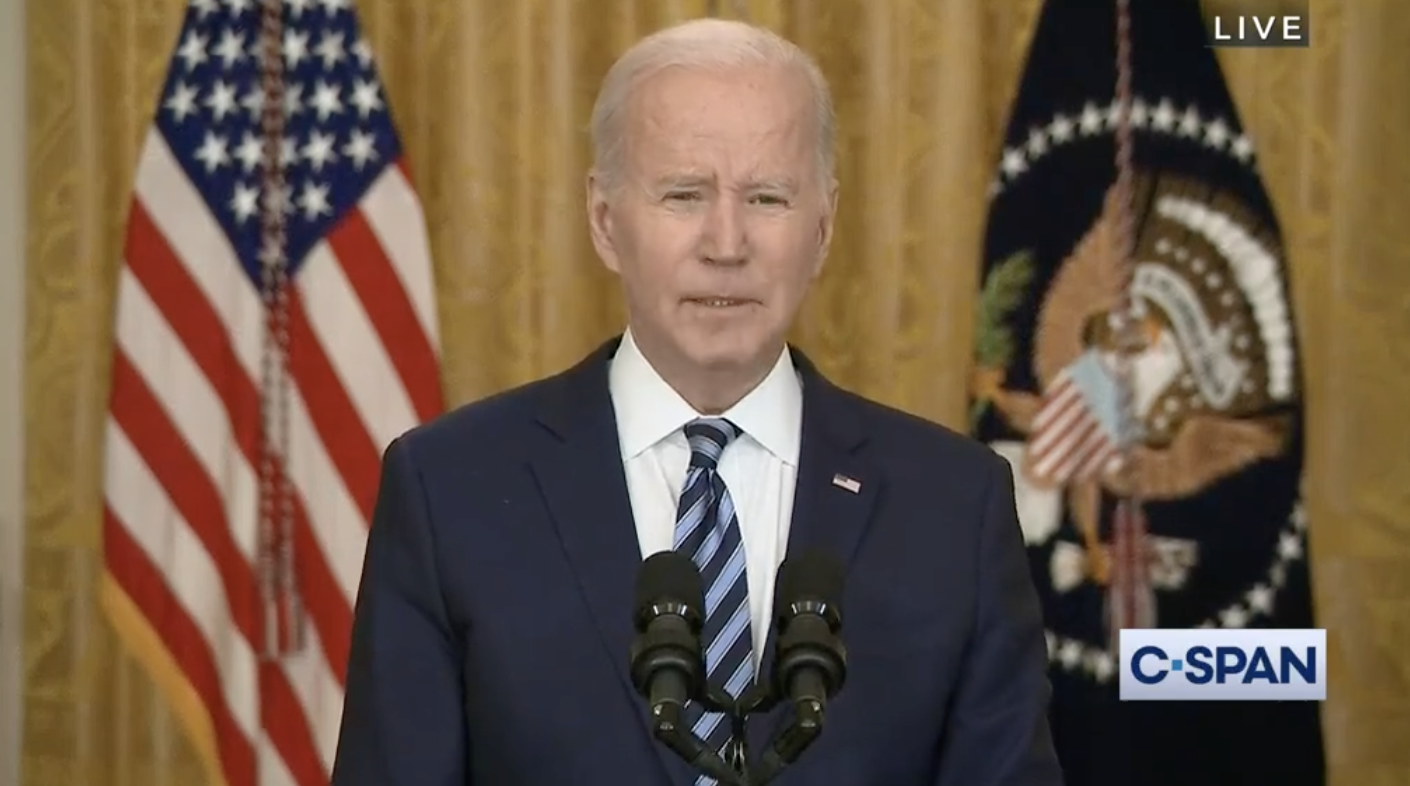 Joe Biden just announced a second round of sanctions retaliating against Russia for its invasion of Ukraine. To understand what he said, it helps to think of the challenge facing Biden: how to avoid losing a World War between authoritarianism and democracy.

Vladimir Putin not only wants to reassert a Russian empire, he wants to do so as a dictator. This is about far more than preventing a democratic Ukraine on his border. Rather, he has been working to discredit the liberal order — both its real hypocrisy, and its claim to work better than authoritarianism — for decades. To do so, he needs to break up US hegemony, split the western alliance, and hopefully, dismantle democracy in the United States. He needs to do so while sustaining his own rock solid hold on power in Russia.

As noted, I think he believed he would have easier early success than he had. I think he believed he could peel off allies (on top of Hungary) within both NATO and Europe, as well politicians and the public within alliance countries. I’m sure he still believes he can use gas supplies and inflation as a weapon to chip away at democracy over time. But thus far, I believe that Biden’s success at undercutting Russia’s efforts to create a casus belli and his ability to achieve some unity thus far made Putin’s gambit far riskier.

Biden emphasized his success in making it clear that Russia was the unjustified aggressor that at the beginning of his presser.

So here’s how to think of Biden’s presser as an effort to not lose a world war between authoritarianism versus democracy.

1. Don’t let it become a world war between authoritarianism versus democracy

As Russia launched its attack last night/this morning, China clearly didn’t know what the party line was yet.

Statements this morning seemed to indicate fairly broad support for Russia’s efforts, with China’s foreign minister expressing support for “Russia’s legitimate concerns on security issues.” Later in the day, while still refusing to call Russia’s attack an invasion, China’s Deputy Foreign Minister declared that, “China is closely following the development of the situation. What you are seeing today is not what we have wished to see,” Hua [Chunying] said. “We hope all parties can go back to dialogue and negotiation.”

China is going to — and clearly had already committed to — help Russia mitigate the economic impact of the response to its action. China shares Russia’s belief it should be able to impose military domination over its sphere of influence (in their case, Taiwan and the South China Sea).

But China has far more to lose from an economic crash and a total split of the world than Russia.

Biden’s not going to persuade China to help isolate Russia. But if he can prevent China from fully backing Russia, he will stave off the worst possible outcome: a world war pitting authoritarianism against democracy.

When he was asked if China would back sanctions on Russia, Biden could have said, “no,” because I’m sure they’re not doing so. But by stating that, he would have incited cries to crack down on China, which is the last thing the US wants right now.

He didn’t answer because it’s not the right question to ask.

Update: The NYT reports on the unsuccessful US effort to get China to stave off this war. It will be interesting to see if China felt they were misled by Putin.

Over three months, senior Biden administration officials held half a dozen urgent meetings with top Chinese officials in which the Americans presented intelligence showing Russia’s troop buildup around Ukraine and beseeched the Chinese to tell Russia not to invade, according to U.S. officials.

Each time, the Chinese officials, including the foreign minister and the ambassador to the United States, rebuffed the Americans, saying they did not think an invasion was in the works. After one diplomatic exchange in December, U.S. officials got intelligence showing Beijing had shared the information with Moscow, telling the Russians that the United States was trying to sow discord — and that China would not try to impede Russian plans and actions, the officials said.

2. Retain the tools of hegemonic power

The US has gotten far weaker in the last two decades. But it still retains the tools of global financial hegemony, which is what it uses to impose its will, and which Russia has been aggressively targeting since at least 2006. Russia made exposing America’s abuses of its access to the SWIFT financial messaging system a priority in its efforts to delegitimize US power, most notably with Shadow Brokers releases but also, to the extent it could control such things, the Snowden leaks. And since 2014, Russia and China have put the framework in place to roll out their own financial messaging system to bypass SWIFT.

That system would not replace SWIFT anytime soon. But if it were up and running it could provide an alternative to SWIFT for toxic regimes, undercutting America’s ability to use SWIFT to make human rights demands.

I suspect that’s one of many reasons why Biden did not announce SWIFT sanctions yet. He claimed (and I’ve seen experts on Iran sanctions say the same) that the other bank sanctions (in part, limiting Russia’s ability to bank in Dollars, Pounds, Euros, and Yens) he imposed are just as strong. But one reason to impose financial sanctions via US and UK banking systems rather than SWIFT is because US and UK banking systems remain a lot more irreplaceable right now than SWIFT.

The bigger reason why Biden didn’t kick Russia out of SWIFT yet is because key allies — Italy, Germany, and Cyprus — aren’t willing to do that yet. Part of this has to do with buying Russian natural gas. Part of it has to do with their trade with Russia.

All three countries have lagged other allies but are coming around (and as noted in this post, a new coalition government in Germany is still getting its feet wet).

So in the meantime, the US and UK can accomplish much of the same goals by expelling Russia from their own financial systems.

In the meantime, Finland and Sweden look much closer to joining NATO than they ever have before (and will attend a NATO summit tomorrow). In other words, Putin’s insanity may lead to the expansion of NATO, not its fracture.

Underlying the SWIFT decision and others, of course, is minimizing the impact of inflation, especially spiking gas prices.

Europe is not prepared to forgo Russian gas yet, and won’t be until temperatures get far warmer (and fall-back measures involving gas from Qatar and other sources have been proven).

The need to mitigate the impact of this war on consumers is something democracies have to deal with and why Putin thinks authoritarian government is better! But it’s a key reason why European countries cannot entire isolate Russia, at least not yet.

Update: See Adam Tooze on the exceptions to the sanctions that largely undercut them.

When Putin first planned this (as I keep saying) I imagine he thought it’d be easy to manufacture a casus belli that would make it easier to achieve his goals both domestically and internationally.

That will make it far easier to isolate Putin internationally.

It will raise the cost of the operation, which seems to have contributed to real apprehensions among Putin’s closest advisors (both his intelligence chiefs and some of the Oligarchs, and even some military officials).

It has also led a significant number of Russians to protest, an unbelievably courageous step. Thousands of Russians have already been arrested, yet more are coming out to protest the invasion.

Perhaps Putin believed he would be hailed as a hero, like he was when he annexed Crimea. Instead, cousins are being sent to kill cousins and a brave handful of Russians are objecting to the barbaric act Russia has taken on.

As it happened, Biden announced a ton of sanctions on Russia’s top banks and some of Putin’s top flunkies. But not on Putin himself. He simply didn’t answer a question about whether the US was doing that.

I’m not entirely sure why that’s the case. Partly, Putin’s wealth is a lot harder to pin down (and some is held by others, who may have been sanctioned).

Whatever the reason, though, the very best kind of political pressure one can put on Putin is via his Oligarchs. Without their consent, his own power would be far more tenuous.

So while I doubt that’s the reason the US sanctioned a bunch of oligarchs but not Putin, it might have the effect of exacerbating whatever discomfort his closest allies have with this action.

He can’t. That’s what makes defending democracy all that more difficult. That’s why the sanctions weren’t what the public expected.

Remarkably, however, Biden has done a better job at persuading allies than Putin has at coercing them.

Rudy Giuliani Attacks Biden as SDNY Sifts Through His Comms for Ukraine Foreign... Introduction and Index To Faces At The Bottom Of The Well