I happened to wake up at 3AM my time just as Russia launched its invasion of Ukraine.

The last thread has gotten long and I’m mostly doom-scrolling like the rest of you, so I thought I’d put up some links.

As the invasion was rolling out, President Zelenskyy made a speech, partially in Russian, appealing to the Russian people to stop this attack.

I would like to address the citizens of Russia directly, not as president, but as a citizen of Ukraine, and I address the citizens of Russia as I would the citizens of Ukraine. We share a more than 2000 kilometer border. Your soldiers are stationed all along it, almost two hundred thousand soldiers, and thousands of military vehicles. Your leaders have chosen for them to take a step forward and into the territory of another country. And that single step could be the beginning of a great war on the European continent.

The whole world speaks of what could happen day to day. A cause for war could arise at any moment. Any provocation, any incident, could be the flare of a fire that burns everything.

You have been told that this flame will bring liberation to Ukraine’s people. But the Ukrainian people are free. They remember their own past and will build their own future. They build, they do not destroy, as they themselves have told you day after day on television. The Ukraine in your news and the Ukraine of real life are two entirely different places, and the difference is that the latter is real.

Zelenskyy then said the Ukrainian government would give weapons to anyone wanting to help defend the country.

As the invasion was just beginning, Ukraine’s Ambassador to the UN raised whether the Russian Federation was ever legally given USSR’s seat on the security council. Then he basically told Russia’s Ambassador to go to hell. “There is no purgatory for war criminals, they go straight to hell ambassador”

Thus far, Republican members of Congress have been far more critical of Putin’s invasion than Tucker and Trump. At least until his next golf outing, that includes key Trump ally Lindsey Graham. 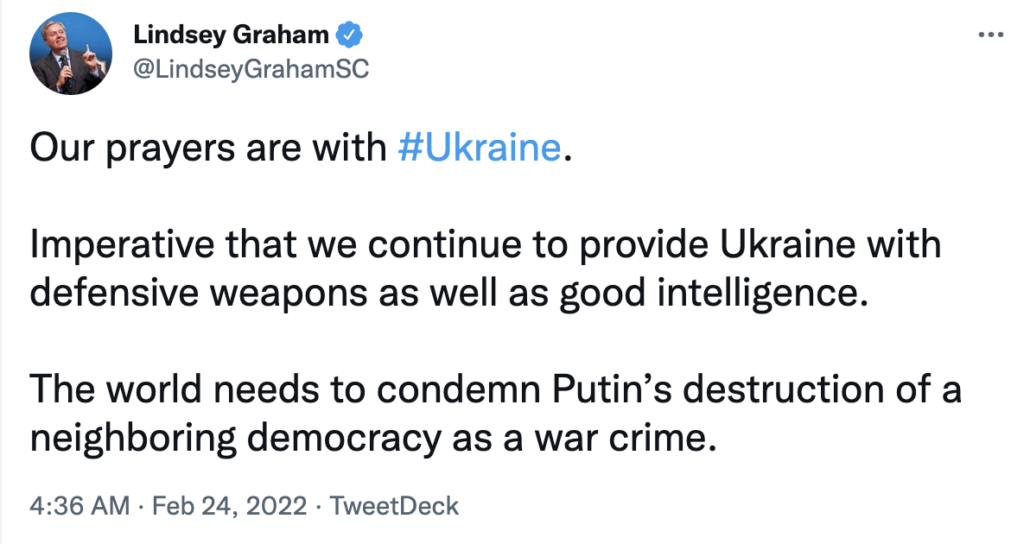 Again, it’s possible that Putin’s invasion will lead to greater solidarity among Europe, NATO, and the US than the division he surely counted on. In fact, both Finland and Sweden will attend an emergency NATO summit tomorrow. Czech President, Miloš Zeman, until days ago viewed as unreasonably friendly to Putin, has called to isolate him.

Another key player will be Erdogan. Shortly before this invasion, Turkey and Ukraine signed a trade pact. Ukraine has asked Turkey to halt warships from transiting the Bosphorous.

Ireland, another neutral country, is backing EU sanctions, which is non-negligible given Russian business presence in Dublin.

China’s Foreign Minister Wang Yi has come out with a fairly supportive statement about Russia’s invasion. If Putin can’t keep China on board this invasion would become unsustainable, but thus far he has a green light.

Pakistan’s Prime Minister Imran Khan is in Moscow, meeting with Putin today. Putin appears to be trying to put together a BRICS type block against democracy (with Pakistan included).

Within Russia, some celebrities and journalists have already gone on record opposing the attack. Authorities are arresting those who dissent, including Marina Litvinovich after she called for protests. 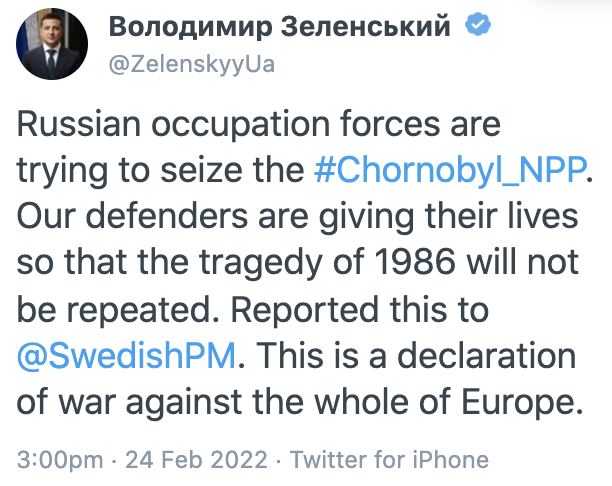